A desert drive in the 2018 Porsche Cayenne

It can really do it all
by Paulo Rafael Subido | Sep 2, 2018
CAR MODELS IN THIS ARTICLE 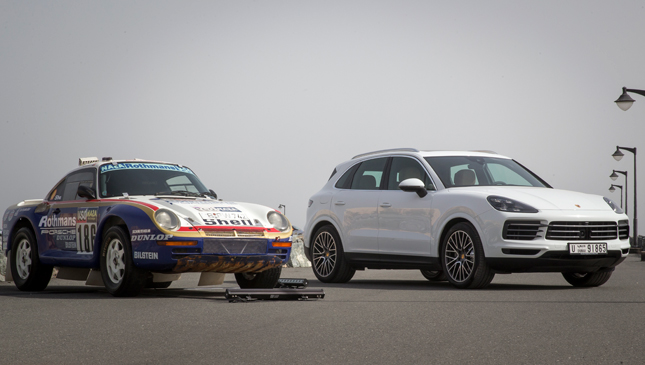 Sting’s ‘Desert Rose’ was released in 1999 and quickly climbed the charts. It’s a heady mix of hard-pounding bass, futuristic arpeggio effects, traditional tabla percussion, and the melodic wail of Algerian singer Cheb Mami’s soaring vocals above Sting’s lyrics. The world-music vibe makes the song quite memorable. It’s catchy, deep, and atmospheric—perfect for setting the mood during my first drive in the desert. It’s a bit of a cliché, but I really don’t care.

The tune is close to my heart because I own an actual desert rose. It’s a rock that can be found in rough desert landscapes around the world, including but not limited to Tunisia, the United Arab Emirates, Egypt, Mexico, Saudi Arabia, and Spain. My green-hued desert rose was given to me by a friend I made when I spent a week in South Africa. Desert roses can be found there, too. Technically, a desert rose is a crystal formation with rose-petal-like clusters that radiate outward. It can fit in the palm of your hand, or be as large as an anthill. These rose rocks form when evaporation happens in a salt basin—leaving this crystal formation behind. It then gets its smooth texture from being battered by the wind, sand, and elements. It’s amazing how something so beautiful can be created in such a harsh environment. 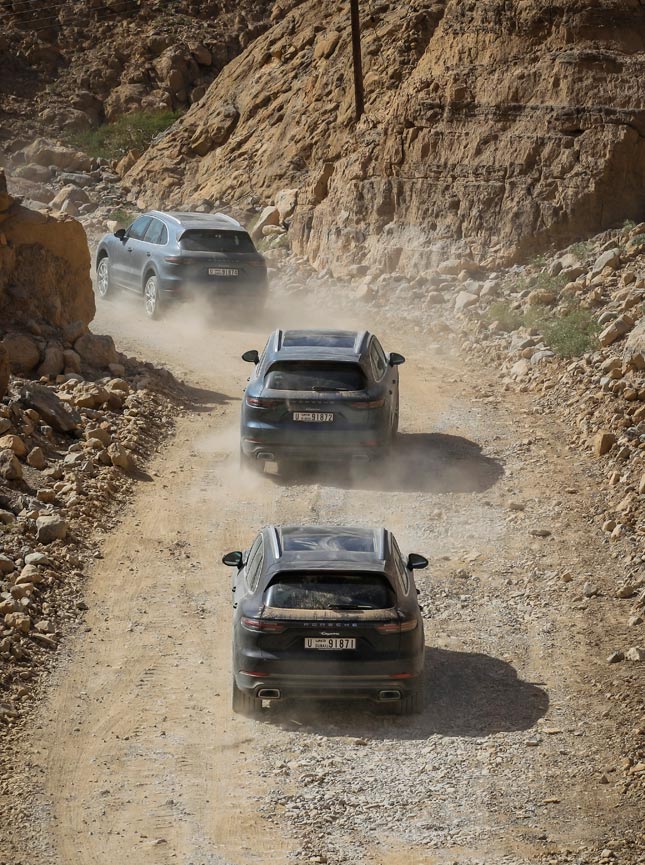 I’m thinking about that desert rose on my shelf while thrashing the Porsche Cayenne through a riverbed. The locals call it ‘Wadi bashing’ and it’s a popular pastime among off-road enthusiasts. But Porsche has taken it a bit to the extreme because a storm that hit the area a week before pretty much washed everything away. The bed is filled with sharp rocks on the surface, and the sinking areas are quite steep. This is a far cry from the fast and flowing asphalt in Fujairah that we left behind when we crossed over the border into the Sultanate of Oman earlier in the day, and boy, is it fun.Our guides and instructors are making us drive on the roughest stuff, and there is no slowing down for obstacles. Times like these, I have to remind myself I’m not dreaming. My first extended drive in a Porsche and I have been let loose on a riverbed that snakes between the steep slopes of the Hajar Mountains. We are hugging the sides of the cliffs, just like the mountain goats that have made an appearance in the area. 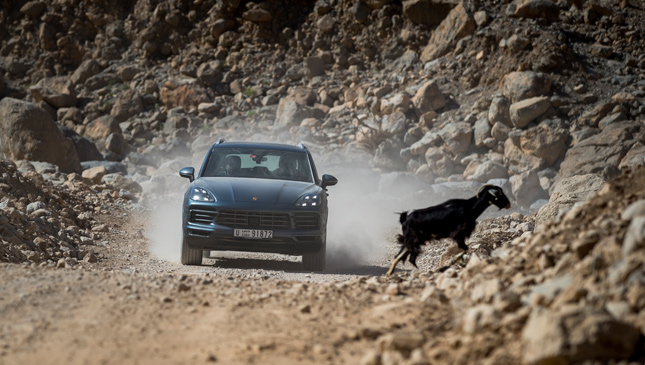 The Cayenne has five pre-programmed drive and chassis modes: On-Road, Mud, Gravel, Sand, and Rocks. Depending on the mode, the sophisticated control unit optimizes the engine and chassis systems to work together in even greater harmony. There’s the Tiptronic S transmission, the Porsche Traction Management all-wheel drive and stabilization program, the air-suspension and damper system, the Porsche Dynamic Chassis Control (PDCC) rolling-motion compensation, and the rear-axle steering. It’s all quite complicated underneath, but the result is a ride that I cannot believe is so comfortable on the rough stuff. We are told that the chassis of the third-gen Cayenne has been redesigned from scratch and is even lighter than the model it replaces. Almost all the chassis systems are new, including the adaptive three-chamber air suspension and electric roll stabilization. It’s that high-tech. 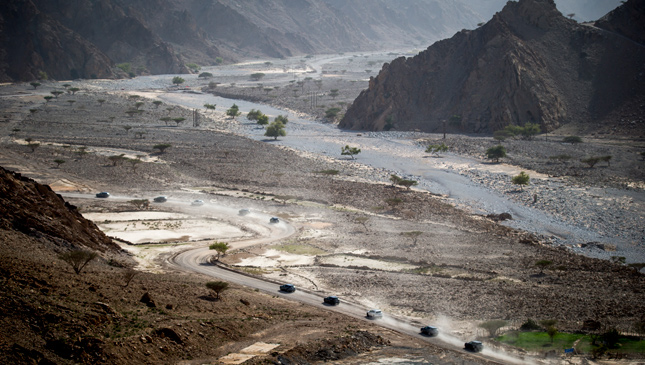 The drive ends at a cliffside restaurant overlooking Zighy Bay. The view is breathtaking, and even after driving over the rocks all day, we are completely refreshed. We drive back to the Emirate of Fujairah, the seaside city that rests on the base of the mountains. We are greeted by the sea we’ve just seen from the vantage point high up on the cliffs. The sun is setting now, and at the hotel, I decide to take a walk to the jetty to check out the Porsche 959 Dakar on display. It is the real deal—one of the three actual cars used in competition.

I am allowed to take a closer look, and security doesn’t mind that I’m poking my head inside the cockpit, taking photos and videos, and inhaling the awesome scent of a retired rally car. Cayenne engineer Stephan Lenschow told me the night before that the 959 Dakar shares nothing with the first-generation Cayenne. All the benchmarking was done with the other more established brands. Now, it’s acknowledged that a vast majority of Cayenne owners will never even bring their rides near an off-road trail or subject their cars to the harsh abuse that the organizers have dished out for our media group, but what’s important is that the world knows the Cayenne can handle anything you throw at it. Proof that Porsche can do off-road was the one-two finish of the 959 in the Dakar Rally in 1986. That was ages ago, but it still makes a solid statement today.

The Cayenne, especially the Cayenne S, is a spiritual successor to that world-famous Rothmans-liveried 959, but it has its own ethos. Whether on the road or on the trail, it delivers major performance. On the road, it will get the adrenaline flowing in the same way only a sports car can. On the trail, it’s one of the most comfortable and refined SUVs on the market, thanks to a terrain-management system that can smoothen some very extreme conditions. In a nutshell, the Cayenne can pretty much do it all. 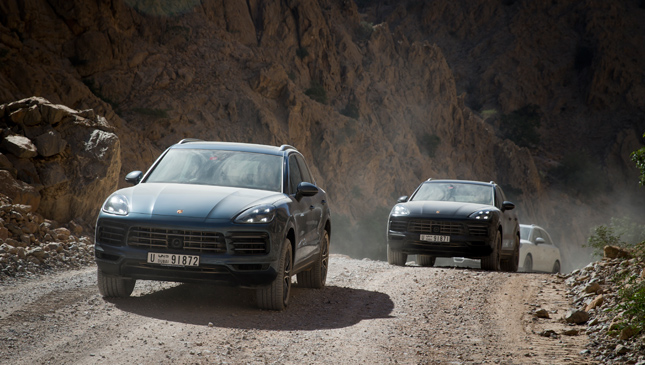 The test drivers present during the event tell us they’ve clocked up more than 200,000km in the UAE alone. The desert is a harsh and unforgiving environment. And you know what is born from places like this? A beautiful car that has been toughened by the conditions, yet offers one of the smoothest and refined drives around. A tradition of toughness combined with the most high-tech systems makes for a breakout hit. Does the formula sound familiar? 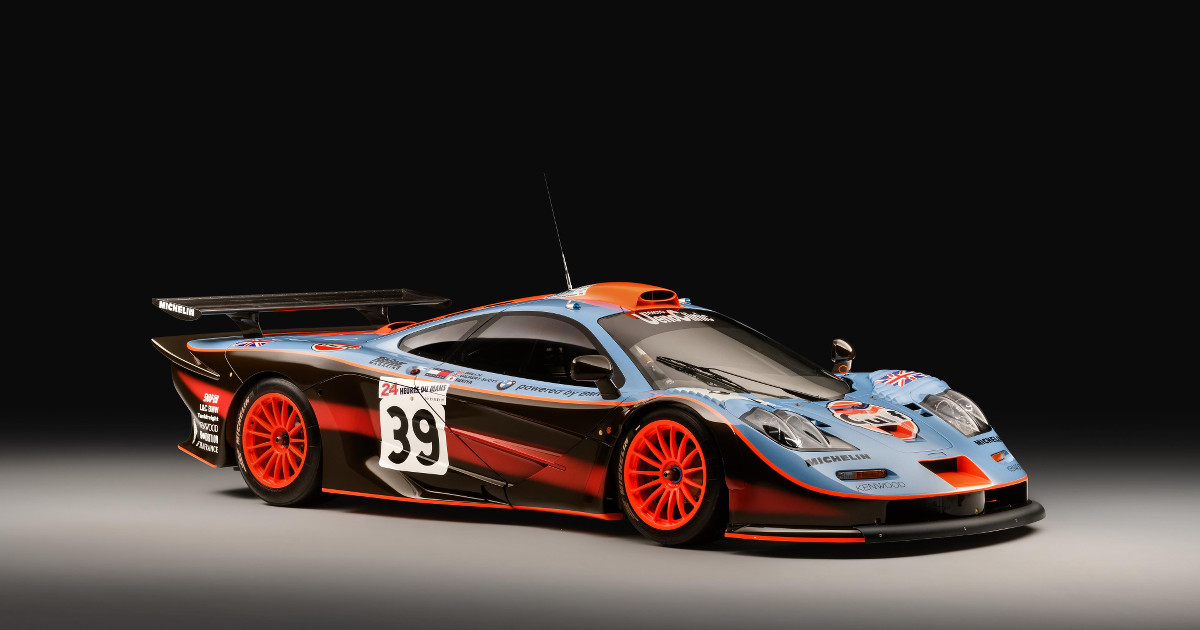 This impeccably restored McLaren F1 GTR is good as new
View other articles about:
Read the Story →
This article originally appeared on Topgear.com. Minor edits have been made by the TopGear.com.ph editors.
Share:
Retake this Poll
Quiz Results
Share:
Take this Quiz Again
TGP Rating:
/20