What going up to Baguio was like a century ago

Some cars literally couldn't make it up
by Richard Wilhelm Ragodon | Nov 24, 2019

Today, a professional driver using the North Luzon Expressway and Tarlac-Pangasinan-La Union Expressway road networks could drive an excellently conditioned vehicle to Baguio City in three hours. Likewise, he has to be very familiar with Kennon’s winding and ascending lanes in order to reach the city proper from Camp One to Camp Seven in 45 minutes or less. The normal time for an average driver is one hour. Approaching the turns properly and shifting the gears correctly are required to achieve rapid ascents along the tricky sections of the road.

Some veteran drivers would prefer driving at night. The advance warning from the headlight beams of an approaching vehicle from the other end of a blind corner immediately informs them of the coming danger ahead. Thus, they can do the necessary precautions like slowing down or stopping at the rightmost shoulder of the road to give way.

A particular challenge to first-time drivers going up is the many blind turns and zigzags as one nears Camp Seven and Baguio City proper. The tricky section begins as a motorist approaches the Lion’s International landmark, which is nine kilometers away from the city. (Lion’s International commissioned the carving in the late’60s or early ’70s. The spot is now a stopover for those going to the city for the first time.) A neophyte driver approaching the section and incorrectly tailgating the vehicle in front of him could end up backtracking in order to build up momentum to go up anew.

Left: 1928 tourists pose in front of the Zigzag Gate that is nine kilometers to Baguio. One can back track to determine the location today. Right: 1935 tourists pose at the junction to Kennon Road. One has to turn right to go to Camp One or turn left to go to Damortis, Pangasinan or Bauang, La Union. It is known as the Rosario junction today.

In the late ’20s, a sign with words on it was erected to inform motorists they were approaching the zigzag section. It was known as the zigzag gate. It has been replaced with an international road sign that belongs to the protocol system of road signs used in Europe then. The current road warning signage is illustrated with a zigzag road pattern. And just ahead of the first steep zigzag approach is the famous lion’s head carved from a large boulder.

Kennon Road was opened to traffic in 1905. But driving up to Baguio was more difficult and dangerous then. A skillful driver was required and a reliable car must be had. Slippage on gravel-surfaced roads and radiator overheating were the common problems encountered early on. Likewise, automobile and engine designs were still in the formative years.

Left: A Stanley Steamer car bound for Baguio is placed on the deck of a Manila-Dagupan Railway (M & D R) flat bed carriage, 1910. Right: On the road to Baguio. Note the gravel and loose soil road surface then.

There was still no direct route from Manila to Baguio in 1908. With no connecting road networks, one had to first transport his car using the service of the Manila and Dagupan Railroad Company (now Philippine National Railway) from Tutuban Station, Manila, to Damortis Station, Pangasinan. It was only in Damortis where one could begin driving his car to Baguio.

Left: Monkey Canyon Bridge near Baguio, 1934. Note the narrow road and the one-lane bridge. Kennon Road was likely opened only for light vehicles before. Trucks and other heavy vehicles had to use the wider Naguilian Road from La Union. Right: Naguilian Road in 1936. Note the embedded large stones along the road as lane barriers.

This early transportation arrangement was also offered to commuters going to Baguio City until the ’60s. I personally experienced going to Baguio via the same route in 1964. From the Damortis Station, passengers would immediately transfer to Baguio Auto Line (BAL) buses in waiting. BAL was also owned and operated by the Philippine National Railway (PNR).

The initial direct route from Manila to Baguio was only established in 1915, when the Manila North Road was opened. The original road network was from Manila to Bulacan to Nueva Ecija to Tarlac to Pangasinan and to the Mountain province. The Bulacan to Pampanga route did not exist yet.

Left: Tourists pose at the base of the lion’s head in 1980. No stalls in site yet. Car is a 1976 W115 Mercedes-Benz sedan. (in front is my brother) Right: In 1965, tourists take a group picture at a scenic spot along the stretch of Kennon Road. The lion’s head was not yet in existence then. (The kid on the right is me)

Early motorists would initially plan a two-day trip. From Manila, they would spend a night at Sibul Springs in San Miguel, Bulacan and proceed to Baguio the following morning. Sibul Spring was a thriving tourist spot until the ’40s. Now the place is just a sleepy town.

Left: Approaching Baguio City proper on a rainy day via the Naguilian Road route at 5:45pm on May 4, 2017. Note the fog in the background. Right: The lion’s head has become a must-see, especially for first timers to Baguio City. Stalls have been erected in situ.

Mr. Dean C. Worcester, in a letter done on May 30, 1908, described his firsthand account on the driving challenge he encountered while ascending to Baguio. The letter was addressed to Emil M. Bachrach, owner of Bacharach Motors, the first Ford dealer in the country (1907). The letter was published in the May 11, 1958 issue of the Sunday Times Magazine.

While the letter described the perilous aspects of driving up to the Summer Capital of the Philippines, no mention was made on the travel time it took him to finish the route. One could presume, based on the hardships told in the letter, that many hours were spent before ending up in Baguio.

Even until the early ’30s, a motorist had to traverse a lot of one-lane-at-a-time hanging bridges that connected a number of mountainsides and river banks with one another. Stopping and yielding the way to another motorist is definitely a delay, which still happens now.

Enclosed and copied verbatim is the 1908 letter. 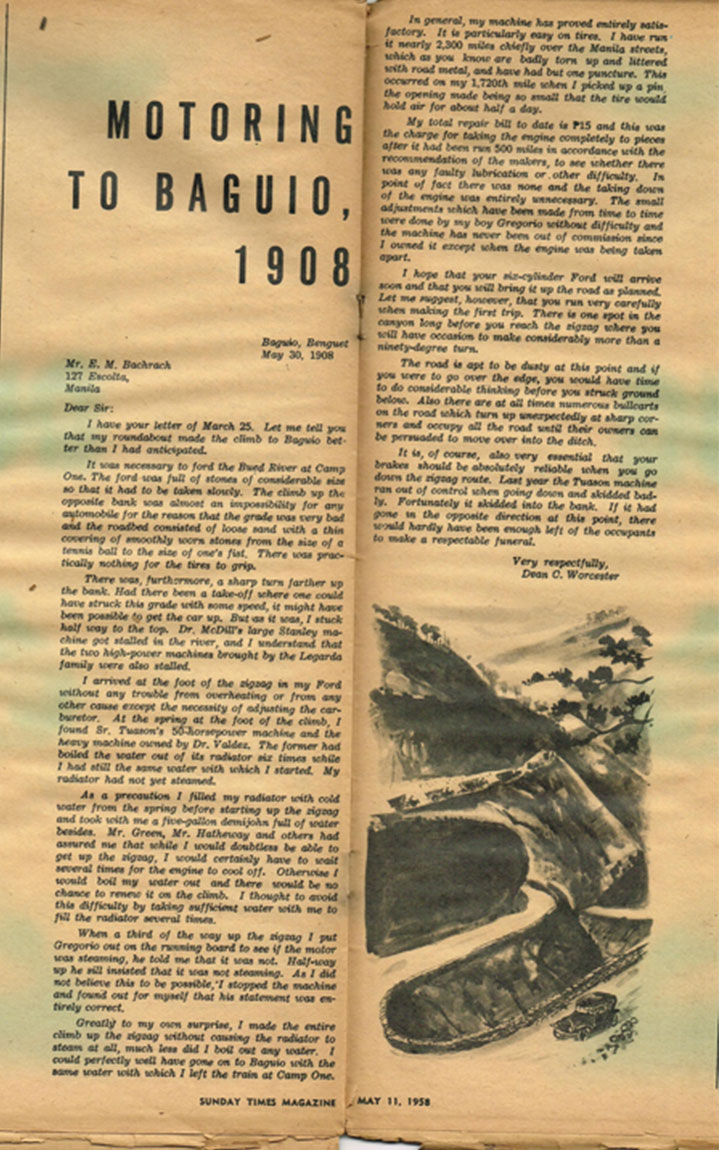 I have your letter of March 25. Let me tell you that my roundabout made the climb to Baguio better than I have anticipated.

It was necessary to ford the Bued River at Camp One. The ford was full of stones of considerable size so that it had to be taken slowly. The climb up the opposite bank was almost an impossibility for any automobile for the reason that the grade was very bad and the roadbed consisted of loose sand with a thin covering of smoothly worn stones from the size of a tennis ball to the size of one’s fist. There was practically nothing for the tires to grip.

There was, furthermore, a sharp turn farther up the bank. Had there been a takeoff where one could have struck this grade with some speed, it might have been possible to get the car up. But as it was, I stuck halfway to the top. Dr. McDill’s large Stanley got stalled in the river, and I understand that the two high-power machines brought by the Legarda family were also stalled.

I arrived at the foot of the zigzag in my Ford without any trouble from overheating or from any other cause except the necessity of adjusting the carburetor. At the spring at the foot of the climb, I found Sr. Tuason’s 50-horsepower machine and the heavy machine owned by Dr. Valdez. The former had boiled the water out of its radiator six times while I still had the same water with which I started. My radiator had not yet steamed.

As a precaution, I filled my radiator with cold water from the spring before starting up the zigzag and took with me a five-gallon demijohn full of water besides. Mr. Green, Mr. Hathaway and others had assured me that while I would doubtless be able to  get up the zigzag, I would certainly have to wait several times for the engine to cool off.

Otherwise I would boil my water out and there would be no chance to renew the climb. I thought to avoid this difficulty by taking sufficient water with me to fill the radiator several times.

When a third of the way up the zigzag I put Gregorio out of the running board to see if the motor was steaming, he told me that it was not. Halfway up he still insisted that it was not steaming. As I did not believe this to be possible, I stopped the machine and found out for myself that his statement was entirely correct.

Greatly to my surprise, I made the entire climb up the zigzag without causing the radiator to steam at all, much less did I boil out any water. I could perfectly well have gone on to Baguio with the same water with which I left the train at Camp One.

In general, my machine have proved entirely satisfactory. It is particularly easy on tires. I have run it nearly 2,300 miles chiefly over the Manila streets, which as you know, are badly torn up and littered with road metal, and have had but one puncture. This occurred on my 1,700th mile when I when I picked up a pin the opening made being so small that the tire would hold air for about half a day.

My total repair bill to date is PhP15 and this was the charge for taking the engine
completely to pieces after it had run 500 miles in accordance with the recommendation of the makers, to see whether there was any faulty lubrication or other difficulty. In point of fact there was none and the taking down of the engine was entirely unnecessary. The small adjustments which have been made from time to time were done by my boy Gregorio without difficulty and the machine never been out of commission since I owned it except when the engine was being taken apart.

I hope that your six-cylinder Ford will arrive soon and that you will bring it up the road as planned. Let me suggest, however, that you run very carefully when making the first trip. There is one spot in the canyon long before you reach the zigzag where you will have occasion to make considerably more than a ninety-degree turn.

The road is apt to be dusty at this point and if you were to go over the edge, you would have time to do considerable thinking before you struck ground below. Also there are at all times numerous bull carts on the road which turn up unexpectedly at sharp corners and occupy all the road until their owners can be persuaded to move over into the ditch.

It is, of course, also very essential that your brakes should be absolutely reliable when you go down the zigzag route. Last year, the Tuazon machine ran out of control when going down and skidded badly. Fortunately it skidded into the bank. If it had gone the opposite direction at this point, there would hardly have been enough left of the occupants to make a respectable funeral.

Wow. Now aren’t you glad we live in modern times? 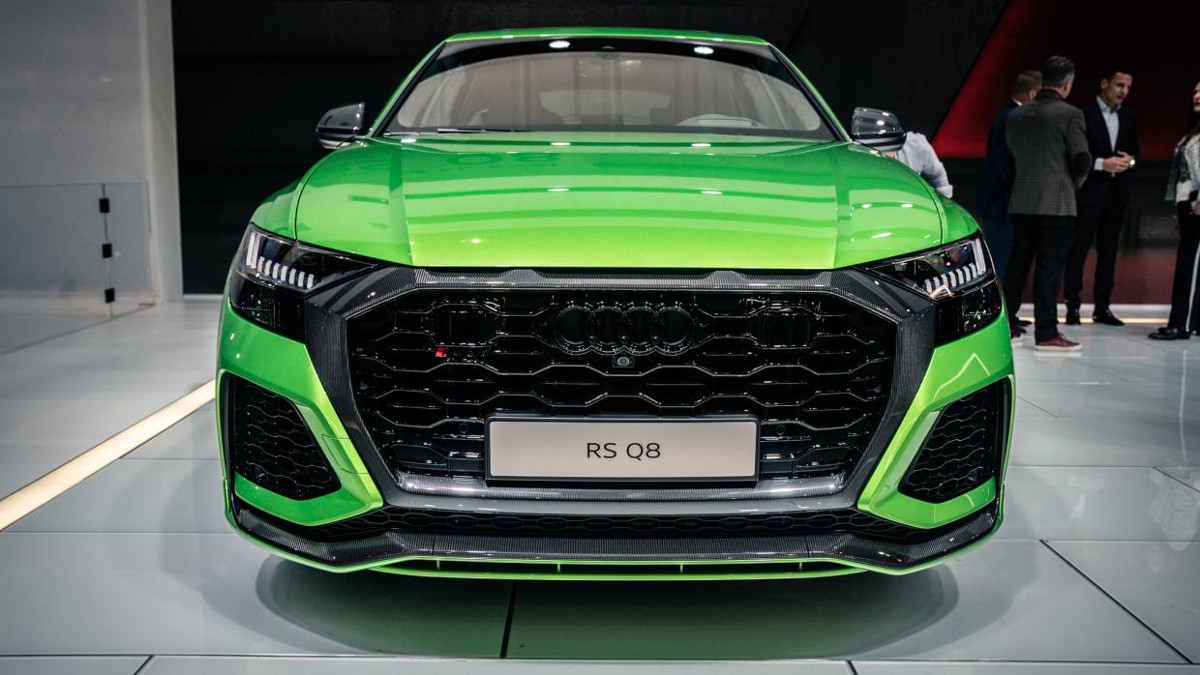 19 Images: What went down at the 2019 Los Angeles Auto Show
View other articles about:
Read the Story →
This article originally appeared on Topgear.com. Minor edits have been made by the TopGear.com.ph editors.
Share:
Retake this Poll
Quiz Results
Share:
Take this Quiz Again
TGP Rating:
/20