Local boy Nico Rosberg takes it for Mercedes
by Sharleen Banzon | May 27, 2013

How best to describe the Monaco Grand Prix? Eventful? It was, definitely. Exciting? It depends on how closely you\'ve been following the feisty Sergio Perez\'s race. His overtaking maneuvers against three world champions garnered this post-race tidbit from Kimi Raikkonen: \"Maybe someone should punch him in the face.\"

Here\'s what happened with the race and our predictions.

1. The safety car will finally get some laps in. In hindsight, this was probably a freebie--maybe we should\'ve tried guessing how many safety-car periods there would be. Still, we\'ll take this one full point because we badly need it.

There were actually two safety-car periods in Monaco. The first was for Felipe Massa\'s crash at Sainte Devote, a carbon copy of his shunt in Saturday\'s final practice (more on this later). The second was for Romain Grosjean\'s collision with Daniel Ricciardo; the former misjudged the braking point for the chicane after the tunnel, rear-ending the Toro Rosso driver.

In between, there was also a 25-minute red-flag stoppage to repair the Tabac barriers after Pastor Maldonado crashed heavily into them. The Williams driver\'s off had been caused by contact with Max Chilton. Both Massa and Maldonado were sent to the medical center after their crashes, but fortunately, neither sustained any serious injuries.

2. At least one big name won\'t make it to Q3. Already, there was a big chance of winning this point when Massa heavily damaged his Ferrari in free practice three--there was no way his car was going to be ready in two hours for qualifying. The cause of that particular off was said to be driver error; his near-identical crash in the race, however, could be down to a mechanical issue, according to his team.

Grosjean was a Q2 casualty for Lotus, too. Like Massa, he\'d also punted the Sainte Devote barriers during practice three having already done so in practice two. A note for those who are planning to watch the Monaco GP someday: That first corner is the place to be.

3. Mercedes on pole, Alonso for the win. Only half a point to be had here--Nico Rosberg did bag pole position for Mercedes, edging out his illustrious teammate and childhood pal Lewis Hamilton by almost a 10th of a second. It\'s his third consecutive pole this year, and the top starting spot finally yielded him a victory.

Alonso\'s Saturday efforts had only been good for sixth on the starting grid, and instead of doing some overtaking in the race, he even lost places to the McLaren drivers on two separate occasions. Jenson Button picked his pocket for sixth toward the end of the GP; prior to that, he had to yield a position to Perez after cutting the turn 10 chicane to avoid a collision with the Mexican young gun. At least, he fared better than Raikkonen, who\'d tangled with Perez on the same spot and had to pit because of a puncture. As mentioned earlier, the Iceman wasn\'t too happy about this, but at least he was able to salvage a single point.

4. Rosberg will finally finish on the podium. And on the top step, no less, 30 years after his world-champion father Keke Rosberg won the Monaco event. You might have caught a sound bite from Nico saying he\'s happy to win his home grand prix. To clarify, the Finn-German driver races under the German flag, but has lived in the principality his whole life.

We must point out now that on the political front, it wasn\'t entirely a day of celebration for Mercedes. Red Bull (whose two drivers rounded out the podium) and Ferrari have both protested the German outfit\'s \"secret test\" for Pirelli right after the Spanish GP. As with all things tire-related this year, this is another messy affair that deserves its own news report.

5. There will be a new championship leader by the end of 78 laps. In a word, wrong. From four points, Sebastian Vettel\'s lead over Raikkonen is now up to 21 points. Alonso lost some ground to his German rival as well and is no doubt itching to strike back in Canada in two weeks\' time. Game on. 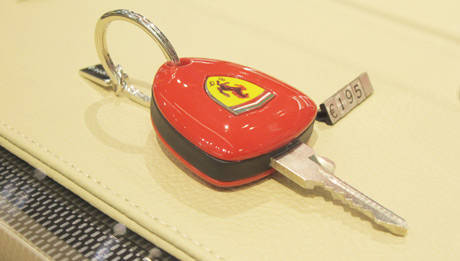 Really cool stuff you can buy at the Ferrari Store in Maranello
View other articles about:
Read the Story →
This article originally appeared on Topgear.com. Minor edits have been made by the TopGear.com.ph editors.
Share:
Retake this Poll
Quiz Results
Share:
Take this Quiz Again
TGP Rating:
/20