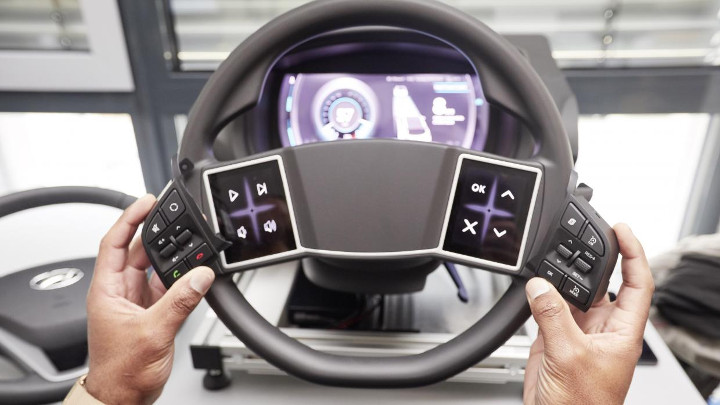 Screens on a steering wheel, obviously. It’s Hyundai’s vision of a future that involves replacing the majority of physical buttons with small touch displays. It might look radical at first glance, but given that we’re now seeing touchscreens replacing physical function buttons everywhere from on mobile phones to driving mode switches, this seems a pretty logical evolution. RIP buttons. Maybe.

How does it work? 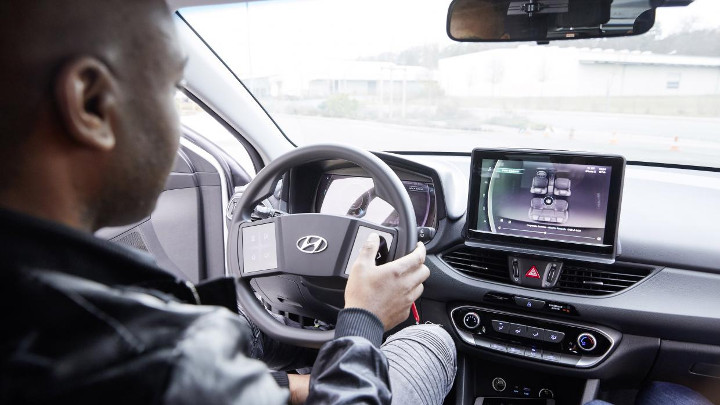 The concept is pretty simple: The virtual buttons on the touch displays perform exactly the same functions as you might find on a wheel that uses physical buttons. You can adjust the volume, make and answer calls, listen to messages, and cycle through the menu system on the instrument display in front of you, all by tapping away at the screens.

Does it work well? 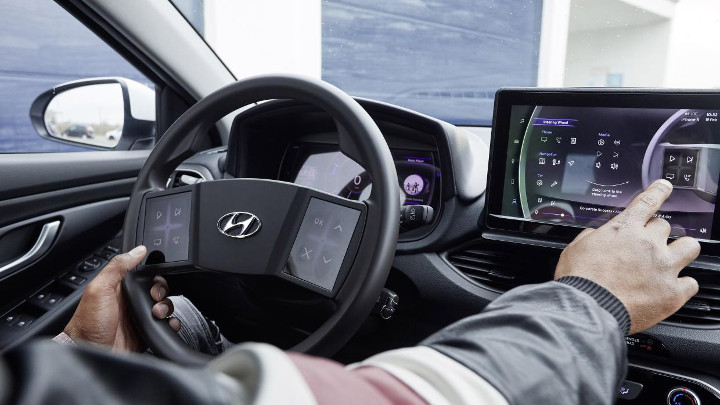 Mostly, yes. The buttons are very clearly labeled and are easy to find, unlike on some physical buttons, which can be a bit fiddly and confusing. There are piezoelectric motors under the panels to provide haptic feedback, so you receive a confirmation ‘nudge’ every time you push the button successfully.

There’s even the option to customize the button layout. For example, you can ditch the volume buttons and replace them with shortcuts for navigation, car settings, or mobile phone functions—all by dragging and dropping icons from the car’s main dash-mounted touch display.

Is it easy to use? 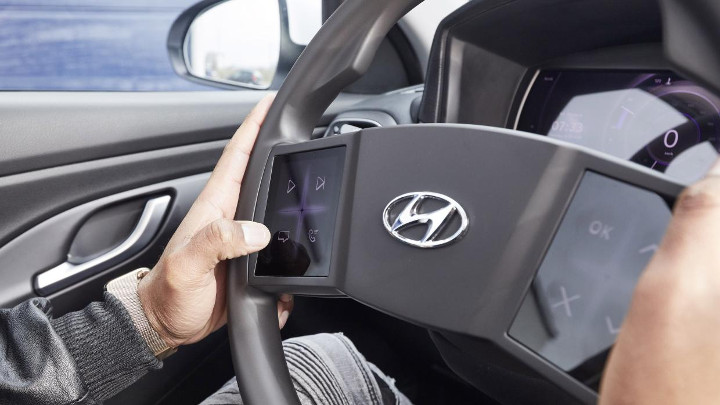 For the most part, but it took me a while to get used to the fact that I had two enormous displays in front of me. They may have very basic functions, but they proved slightly distracting to me because subconsciously, I expected them to provide more features than they actually did. My instinct was to use them like I might use a mobile phone, swiping in search of more options or new icons, which of course isn’t possible.

So you were using it wrong? 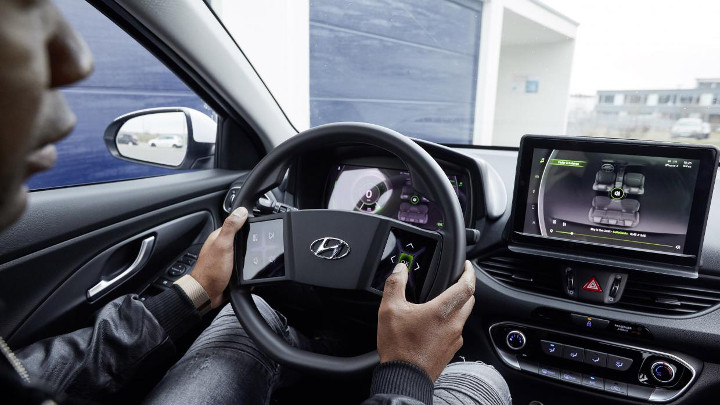 Yes. A bit like a child swiping at a television because they expect it to have the same functionality as an iPad. I also found the ball of my hand would accidentally touch the screens while driving. Not enough to accidentally select an icon (you need to apply firm pressure for that to happen), but enough to highlight that icon, causing it to glow. This made me feel as if I was imminently about to select something by mistake, which is less than ideal when you need to be focused on the road ahead. 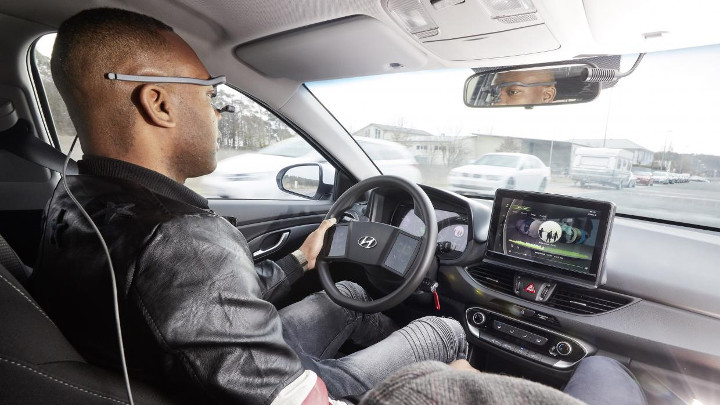 Not if you’re used to it, I guess. Hyundai says it has organized driver distraction clinics where they placed people in a simulator, strapped cameras to their eyeballs, and asked them to perform specific functions, both while standing still and driving the car. They reckon user feedback was positive, and distraction levels, measured by the amount of time people spent looking at the steering wheel, were low.

Looks a bit weird though, doesn’t it? 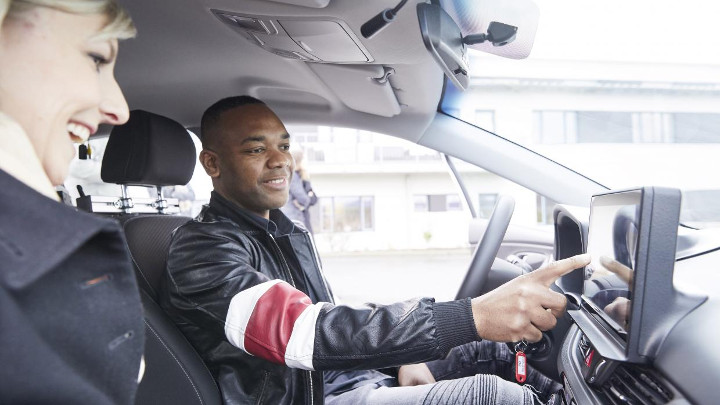 Perhaps. Like Hyundai slapped a pair of those Doro phones on the steering wheel—the ones designed for the elderly or the shortsighted. But this is just a prototype, so if it ever does come to market, I’m sure Hyundai can make them look a little less less...gigantic.

Will this ever be seen in a real car? 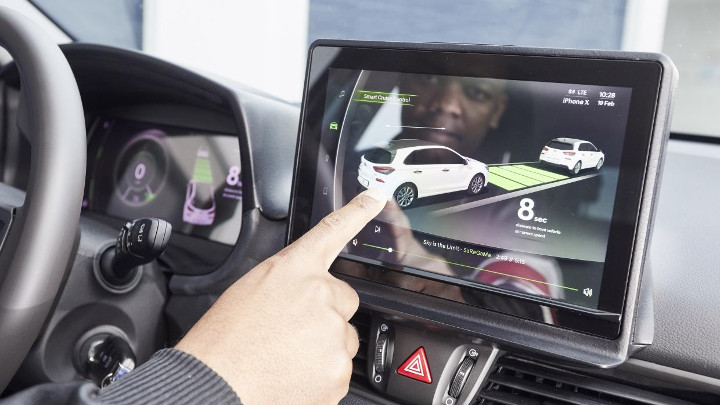 Maybe, but not any time soon. The system still needs a lot of work before it’s ready for public use, but top-secret customer clinics are underway. Hyundai, to its credit, seems pretty serious about the project, and has invested plenty of time and effort into developing ever more effective iterations of the system—moving from mouse touchpads to what you see here.

So, don’t hold my breath then? 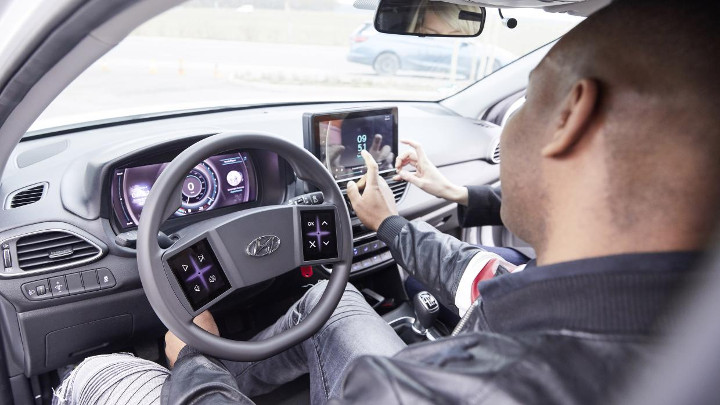 No. But like every other part of a car’s cabin, the steering wheel will evolve. Whether it evolves into what we see here or something slightly different (such as a big central display) remains to be seen.

What else are they working on? 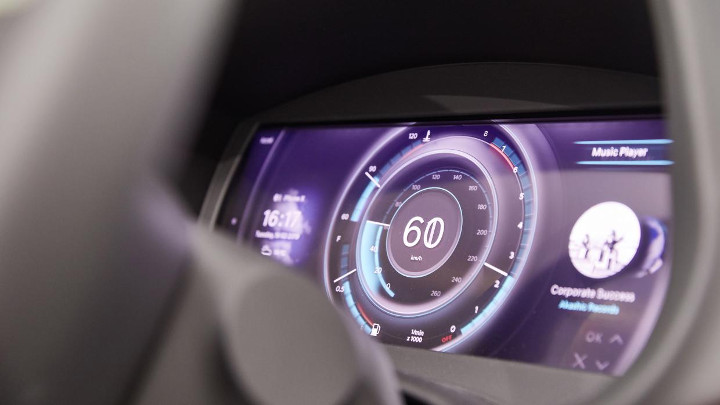 Well, inside the same test car, Hyundai showed off a 3D instrument cluster, which was pretty awesome. The setup uses two displays, laid a few millimeters apart, showing a stereo image. This might sound like a gimmick, but it does add a satisfying depth to the on-screen graphic. It worked so well, in fact, that it’s something I’d be happy to see in every car. Bring it on, Hyundai. 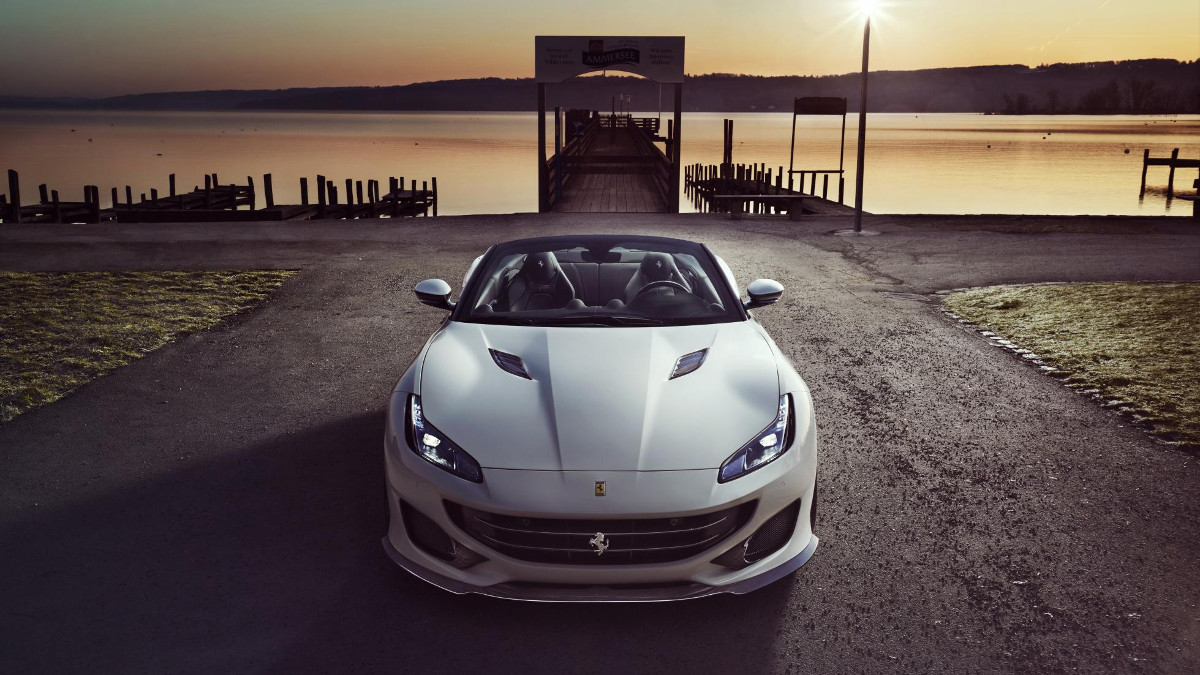 Novitec has tuned the Ferrari Portofino to make 675hp
View other articles about:
Read the Story →
This article originally appeared on Topgear.com. Minor edits have been made by the TopGear.com.ph editors.
Share:
Retake this Poll
Quiz Results
Share:
Take this Quiz Again
TGP Rating:
/20