TG UK’s editor on the seven-time Formula 1 champ, who turned 50 on January 3rd
by Charlie Turner | Jan 4, 2019
CAR BRANDS IN THIS ARTICLE

“Never meet your heroes.” So goes the old adage. In a world of false celebrity—where the label seems easily won and increasingly transient—meeting one comes laced with the risk of potential disappointment.

But sometimes it doesn’t. I’ve been lucky enough to meet a number of genuine heroes, and while a few of them made the adage run true, the majority delivered on the levels of expectation. Actually meeting them merely added to the admiration I held for them and their achievements. 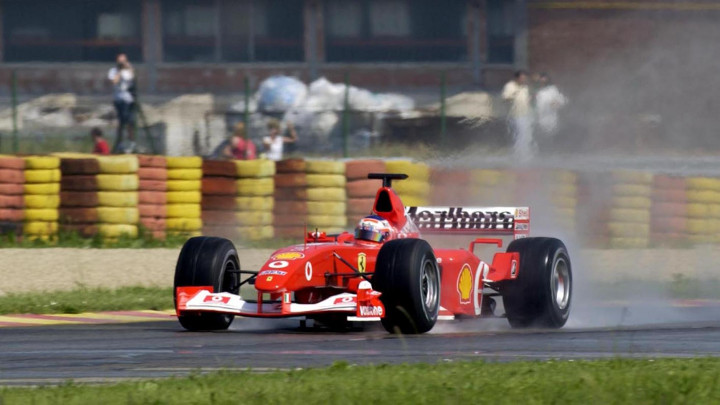 Then there was Michael Schumacher. We had met briefly a number of times in my previous role working for Bernie Ecclestone, but I’d always wanted to drive with him, to see how the skills that had taken him to seven Formula 1 world championships translated into a road car. My opportunity came one baking-hot June day in 2009, at Ferrari’s test track in Maranello. It turned out to be something I’ll always remember.

The background went something like this: Since retiring at the end of the 2006 season, Schumacher had taken on an “advisory” role at Ferrari and helped out with the development of a number of road cars. I’d been invited to join him at Fiorano for a few laps in the then-new 599 GTB. As you do.

All I really remember was dropping into the passenger seat and admitting to being very pleased to be there. Michael simply smiled and asked: “So, Charlie, do you want to go fast or sideways?” While I pondered the question for a millisecond, he answered his own question: “Start sideways, then fast?” Brimming with wit and whip-crack repartee, I stuttered out, “Sure…” 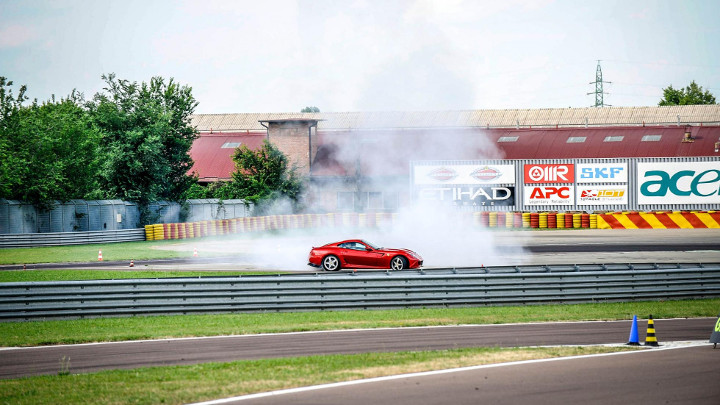 And then we were off—a blurry, noisy, glorious attack of Fiorano where I spent most of the time staring through the side windows. I distinctly remember that each corner had entry, apex, and exit markers set out for our more amateur efforts later that afternoon, and Schumacher neatly clipped each of the exit cones with the rear tires, drifting through each corner with a godlike display of balance and precision. He wasn’t just good, he was incredible. And he was enjoying himself: As he shaved each marker, he watched it wobble in the rear-view mirror and allowed himself a little smile.

Even more impressive? Although he was driving at a level that would occupy the entirety of mortal bandwidth, Michael Schumacher was happily chatting away as if he was popping to the shops. It was staggering—and then, this insane demonstration went a bit wrong: We fired over the famous bridge section and down to the hairpin at Turn 6. More drifting occurred, and in an effort to keep up his 100% hit rate on the exit markers, Michael overcooked the exit, and spun.

“You spun it,” I laughed, still expressing my mighty vocabulary. He grinned, apologized, and muttered something about “settings.” Ever the F1 driver. Human, after all. After a quick donut, we were off and spent the rest of the lap happily removing the rest of the exit markers, then we went for a fast, tidy one. 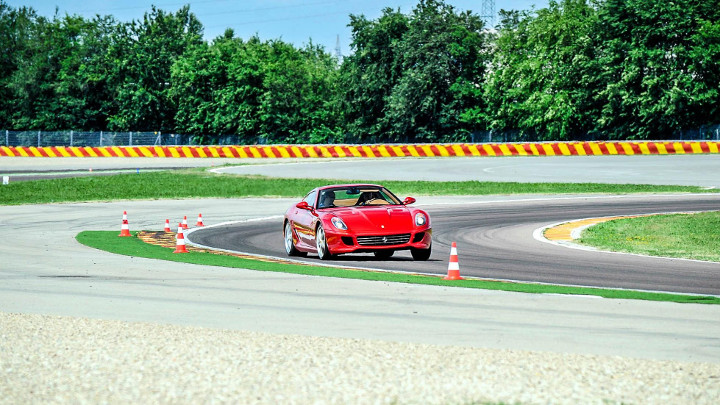 Immediately, his whole demeanor changed. This lap counted, this one was where he could showcase the performance of the car and his ability to maximize it. And it—his art of driving—was mesmerizing. Precise, accurate, ballistically fast. But also calm and undramatic, a masterclass. I only had a few laps, but I got the idea—you didn’t need to be his passenger for long to know that Michael Schumacher was on another level entirely.

Ever since, it’s been a little mental treasure of mine, those laps. It was the last time I got to see Michael, and the tragedy of what followed is too hard to begin to understand. He was, and remains, a legend, one that never failed to deliver. Hugely talented, he wore his success lightly, with a generous sense of humor—genuinely always a pleasure to spend time with.

The word “hero” is worn a little thin these days, but in Schumacher’s case, it was—and is—entirely appropriate. Here’s to sunny afternoons, Ferraris, and Fiorano. And a hero who deserves the title. Keep fighting, Michael. 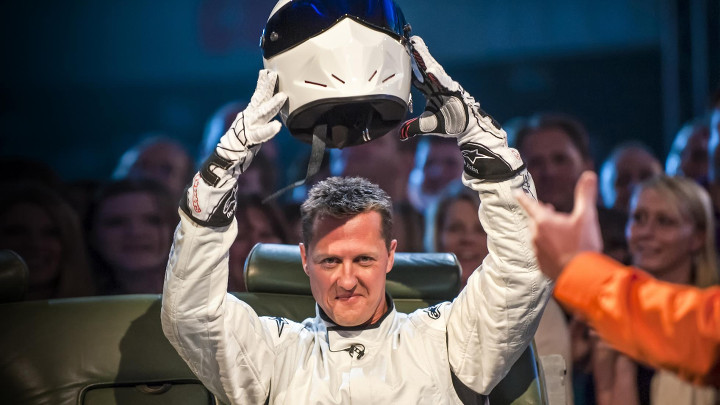 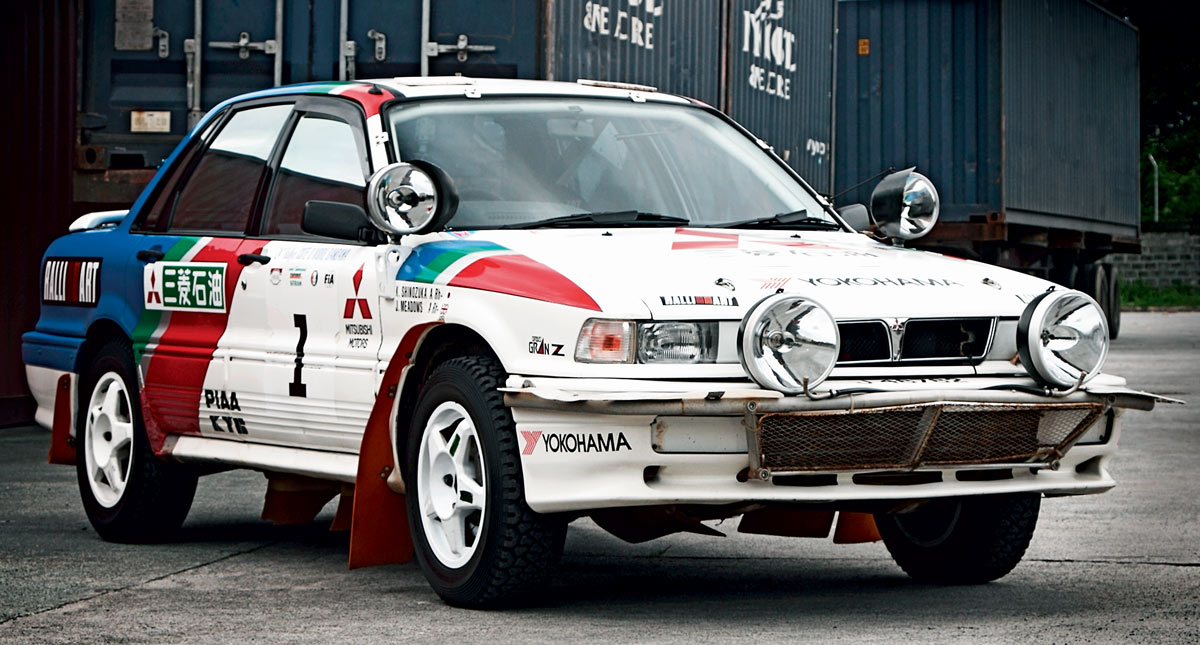 This is the Mitsubishi Galant you want
View other articles about:
Read the Story →
This article originally appeared on Topgear.com. Minor edits have been made by the TopGear.com.ph editors.
Share:
Retake this Poll
Quiz Results
Share:
Take this Quiz Again
TGP Rating:
/20