The SSC Tuatara: Will it be the first car to break the 300mph barrier?

We get to drive the potential record-breaker
by Charlie Turner | Aug 27, 2019

Monticello Motor Club is about as far removed as you can get from a damp track day at a circuit that has seen better days. This 6.6km, ribbon of tarmac, nestled in a sleepy valley 145km north of New York City (a 90-minute drive in your favorite supercar...or, more realistically given the clientele, a short hop in your helicopter), pitches itself as a country club.

Monticello is where the real-life Bobby Axelrods come to play, where performance and speed are the primary currency. It is therefore as rich an environment as it is possible to imagine for a hypercar looking to establish itself at the top of the bragging rights food chain. Sat at the end of the pitlane is just the thing to spike the members’ interest: the SSC Tuatara, a car we first came into contact with in 2011 as a design concept, but one that, after years of development, is only now starting its journey toward being the first production hypercar to smash the 300mph (483kph) barrier. 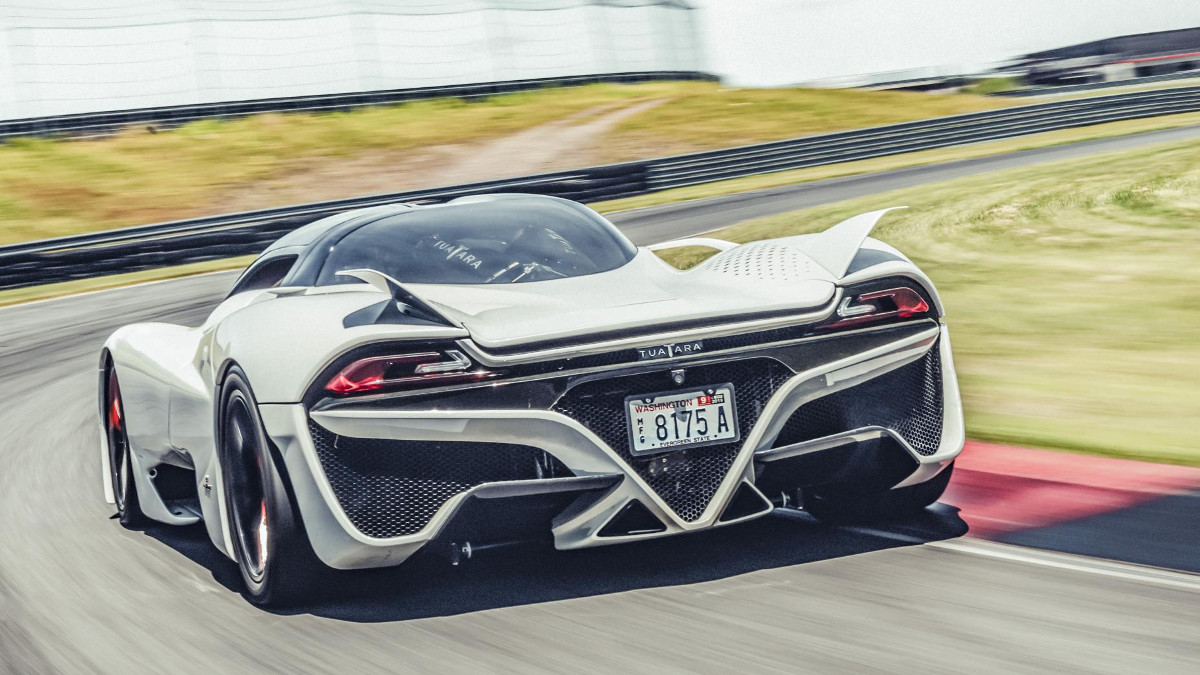 Time for a quick recap. In 2007, Shelby SuperCars (SSC) stunned the automotive nobility when its Ultimate Aero set the production-car speed record by hitting 255.83mph (411.72kph) on a closed road in Washington State, taking the title from Bugatti. To add insult to injury, the Shelby record was approved and validated by Guinness—meaning America had officially beaten the hypercar glitterati.

“When we looked into setting the record, it became clear that there were no standards by which these speeds were validated, so we worked with the team at Guinness and agreed the parameters for an official speed run: Two passes on the same stretch of road within an allocated time,” says Jerod Shelby, CEO of SSC. “Those rules are still in place today, so basically, we wrote the rule book.” 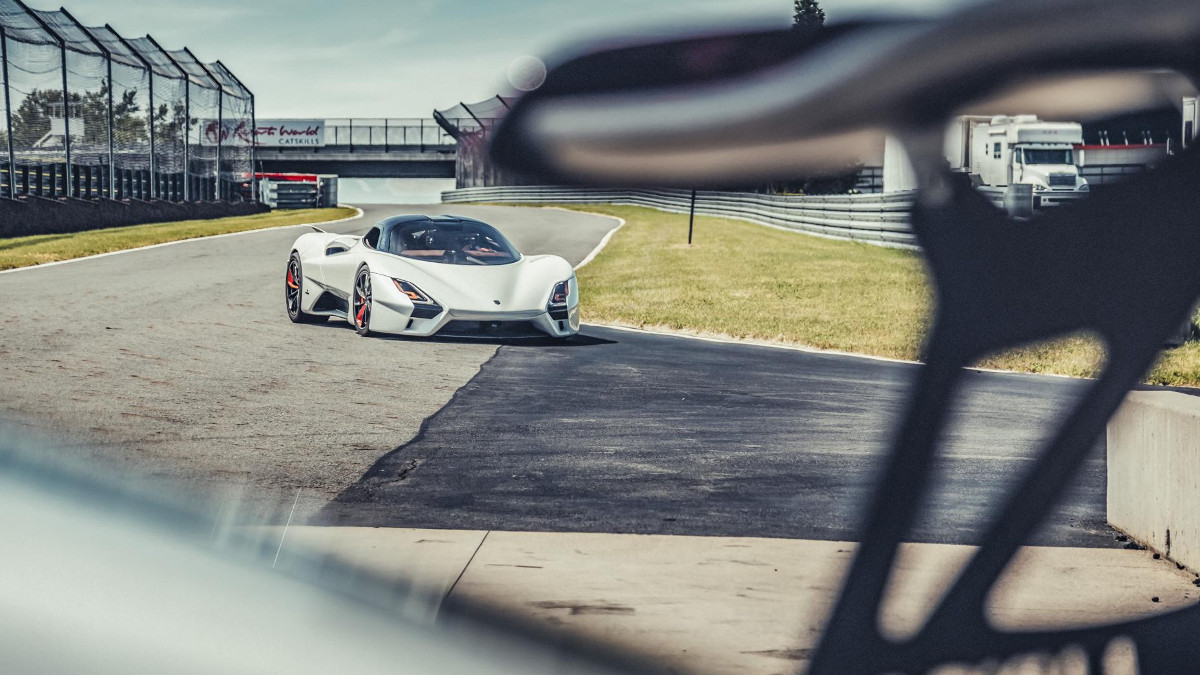 The Ultimate Aero fired the starting gun on a multibillion-dollar race to be the fastest. As top speed has increased, the focus has changed to who’ll be the first to break the 300mph barrier—a battle that SSC, Koenigsegg, Bugatti, and Hennessey are all vying to win.

We first set eyes on the SSC Tuatara’s wildly futuristic design eight years ago, but it still looks like a spaceship. If anything, it fits into the design lexicon of 2019 hypercar far better than it did in 2011 (especially when fitted with the optional track pack). But the design isn’t focused purely on visual impact—its form has been honed by Jason Castriota (Maserati Birdcage Concept, Ferrari 599, and the one off that started it all...the Ferrari P4/5), and is driven by the unwavering demands of aerodynamics at high speed.

“At these stratospheric speeds, the aerodynamic drag of the vehicle has a huge effect on your high-end performance, and the hp required to get to the magic number. We have a Cd (coefficient of drag) of 0.279 and the Chiron has 0.35. We’ve done the math and we’re confident we’ll do the number...with power to spare,” Castriota explains. 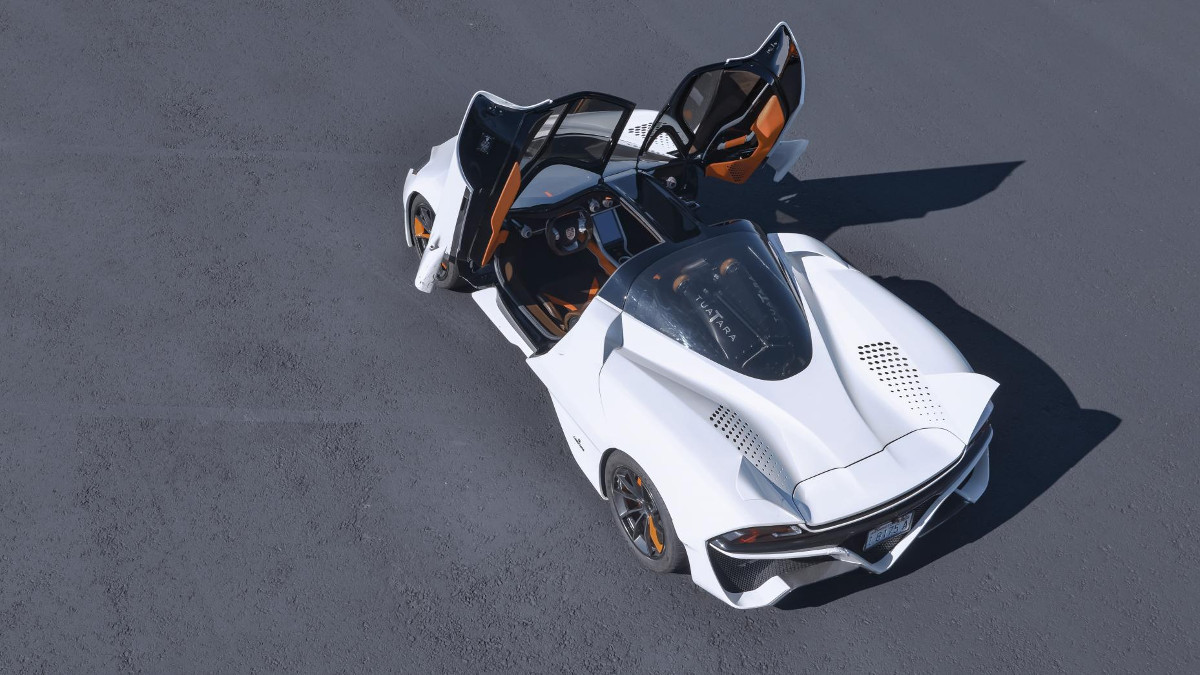 The Tuatara is powered by a bespoke flat-plane crank 5.9-liter twin-turbo V8 developed by Nelsen Racing that redlines at 8,800rpm. It delivers 1,332hp on ‘regular pump gas’ or an eye-watering 1,726hp on E85 (barrels of which have come to Monticello to give us the full experience today). Transferring this power to the rear wheels (yes, only the rears) is the work of a bespoke seven-speed automated manual ’box, developed by CIMA in Italy and capable of delivering a flat shift in less than 50 milliseconds.

SSC claims a 0-100kph time sub-2.5sec, a quarter-mile in under 9.75sec, and a top speed of...well, we’ll have to wait and see. The Penske active suspension has three settings: Normal, Sport, and Track. Transferring fire and fury to the road surface are Michelin Pilot Sport Cup 2 tiress, 245/35 on the front and a worried-looking 345/30 on the rear. 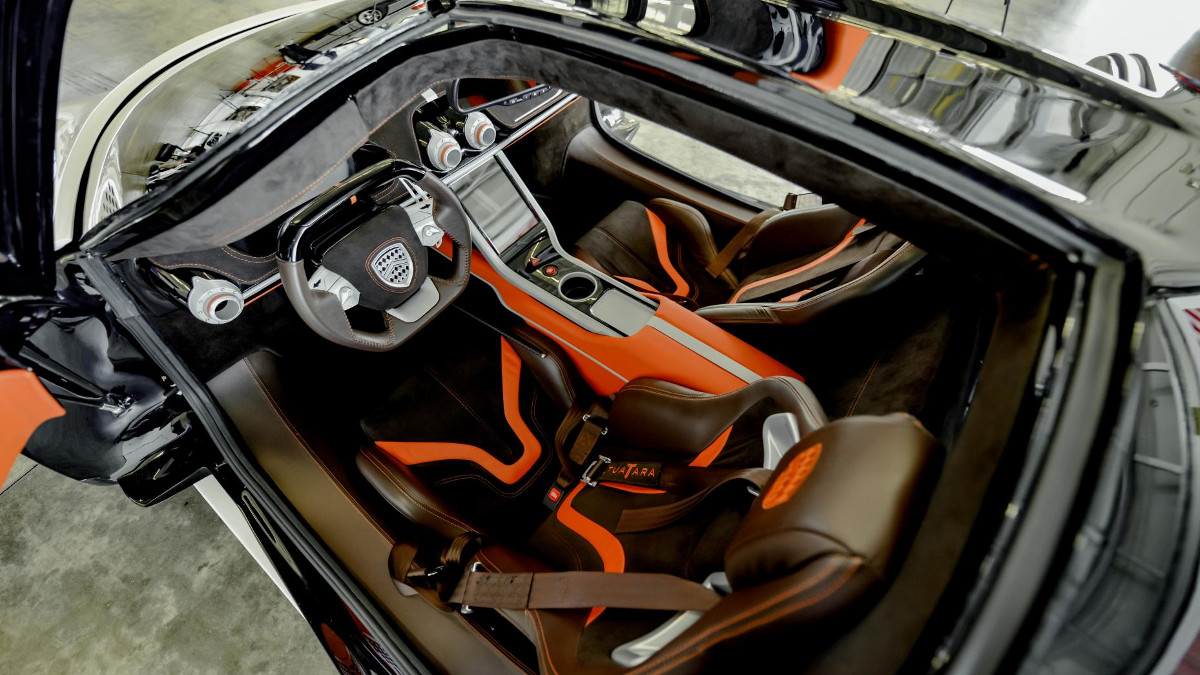 With all-carbon bodywork and the production car featuring a bespoke carbon tub, the SSC weighs in at 1,247kg, or 272kg lighter than an Aventador. Open the dramatic swan wing doors and the interior has a highly bespoke feel.

Take the HMI—a bugbear of most limited-series cars and a tell-tale of which OEM computer mainframe is actually keeping you on the road. SSC, and a team in Norway, has developed a completely unique system that also interacts with an app on your phone and allows you to access the car and change various parameters, including the ride height, remotely...

To truly understand the appeal of the SSC, you have to understand the clients. Today, I’m in the company of a mixture of ex-NFL Super Bowl winners, global business owners, and big-deal traders—all successful, all incredibly excited to see the car (let alone drive it), and all with a shared mentality. Each of them is on the speed-dial first-call list of every carmaker’s limited-series client liaison officer, but when you can have anything, the quality you crave the most is exclusivity. 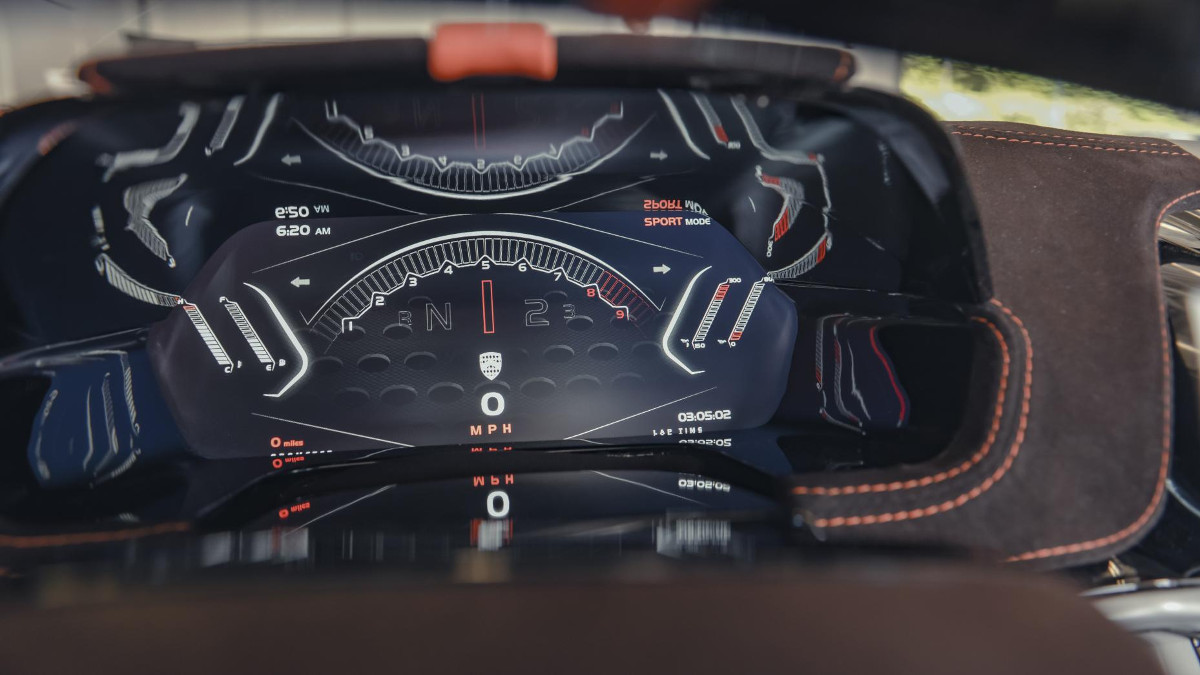 I watch each of them climb into the car and play with varying degrees of success out on the circuit. On their return, the unanimous response is shock and awe—the Super Bowl Hall of Famer exits with the broadest smile, eulogizing about “limitless power” and “explosive shifts.” When the VIP guests are done, it’s time for me to try it.

After a couple of initial exploratory laps with Shelby driving, we swap and I set out to learn the circuit and see if 1,726hp fed through the rear wheels is just an accident waiting to happen. My first four laps, learning a circuit where members are dicing in their cars, is not all kinds of fun. But contrary to my worst fears, the SSC delivers its huge power in a way no rear-wheel-drive car should. 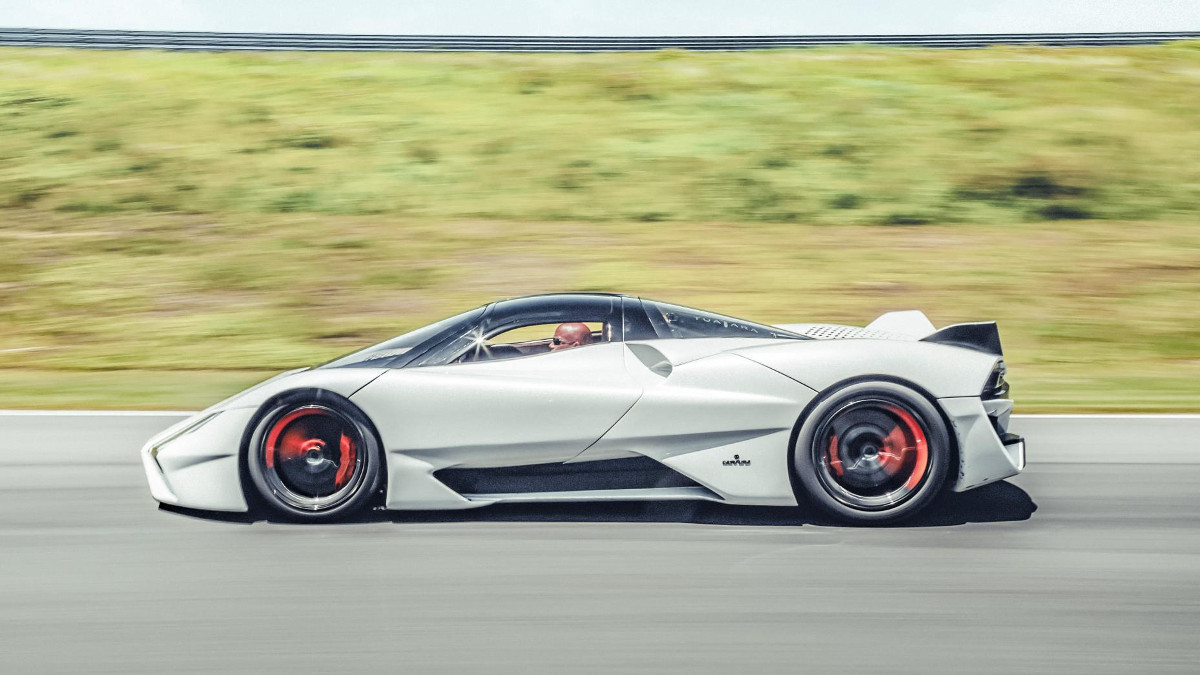 The track is quickly swamped with a squadron of Miatas, so Jerod and I head out onto the highway to see how the SSC fares in the real world. You’re conscious that excessive power is always available, and any pressure put on the throttle is accompanied by a huge inhalation then a dump of boost pressure, so you end up wafting along, barely troubling the potential under your right foot.

The visibility is narrow, focused, and aggressive, the ride surprisingly is supple thanks to the active Penske suspension, and the ’box shifts smoothly at these lower speeds. Our short trip showcases enough potential to prove owners could happily drive from Manhattan to Monticello if they wanted to. 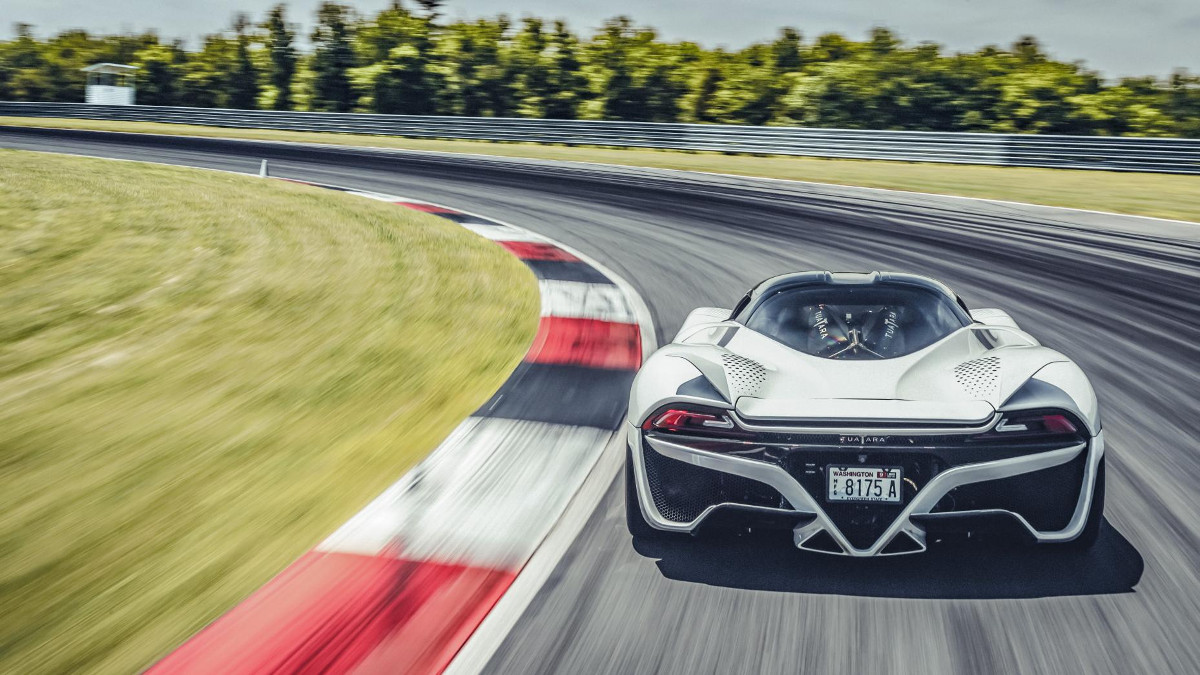 Back at the track the following day, and after an evening to recalibrate, it’s time to dig more deeply into the Tuatara’s potential. With the car in Track—which drops the ride height to 60mm from the road, stiffens the dampers, and makes the gear changes whipcrack-fast—we head out.

With a clear circuit, I finally summon the courage to pin the Tuatara down the back straight. Second gear, full throttle...the rear of the car squats, squirms momentarily, then grips and goes. It’s violently impressive—but not as violent as the gear change, which is, frankly, terrifying. Every full-throttle shift is accompanied by an explosive shockwave, some of which seems to focus its energy at your elbow and feels like it’s threatening to burst out.

The acceleration is brutal and, once you’re in the powerband with the turbos spooled up, it’s linear and shows no sign of letting up until you punch a hole in the horizon. As the laps accumulate and confidence grows, the following become the headline acts: The steering is responsive, the brakes are mighty, but the pedal is currently too soft (Shelby says this has already been addressed for production). The engine never feels underwhelming, the turbos dominate both the engine performance and its sound. The faster you go, the more impressive the SSC’s aero feels, but we need more space to truly dip into the boundaries of this car’s performance. 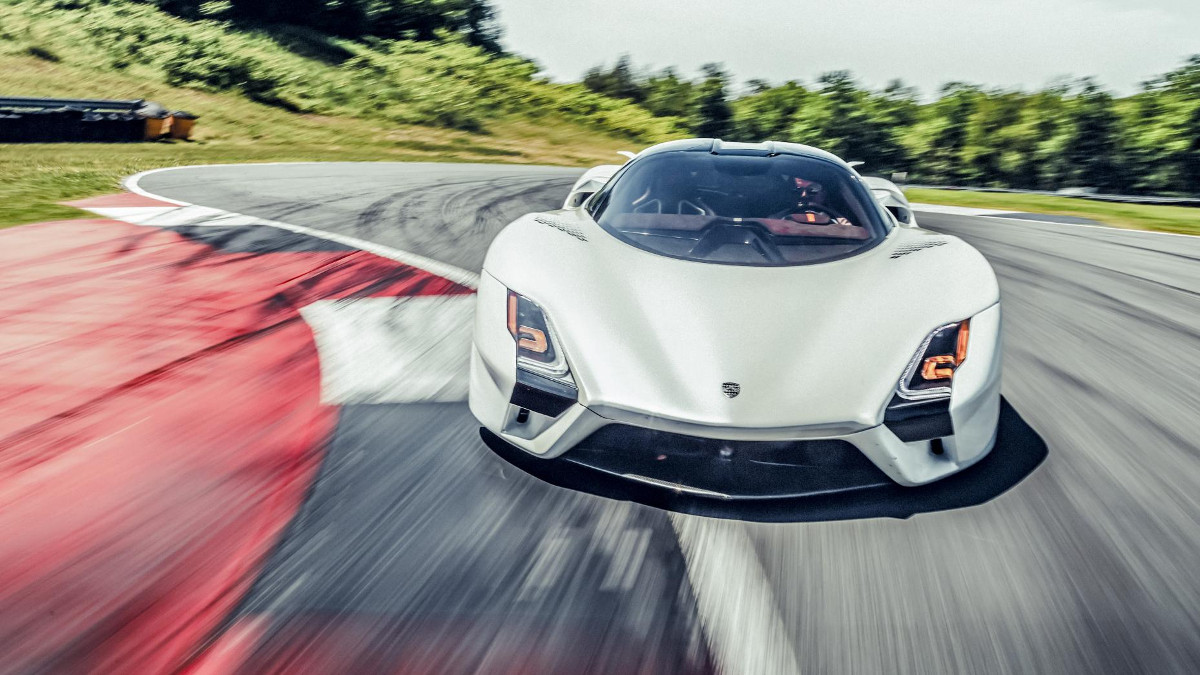 Monticello just isn’t big enough to fully uncork this car. For that, we need to relocate to a very long road in Washington, close it down, point the SSC at the horizon, and see where the needle stops moving.

For many, the race to break 300mph is an irrelevance, a meaningless figure already broken by many on the salt flats. For some, like Shelby, it’s the driving force in their pursuit to build the car of their dreams. For the client base—people who have everything—having officially the fastest thing is ‘a thing.’ There’ll only ever be one production car that is the first to break the 300mph barrier, and only time will tell if the Tuatara will claim that title. But if SSC can beat Bugatti, Koenigsegg, and Hennessey to the punch, Bobby and the billion-dollar boys’ club will have a new item on the shopping list. 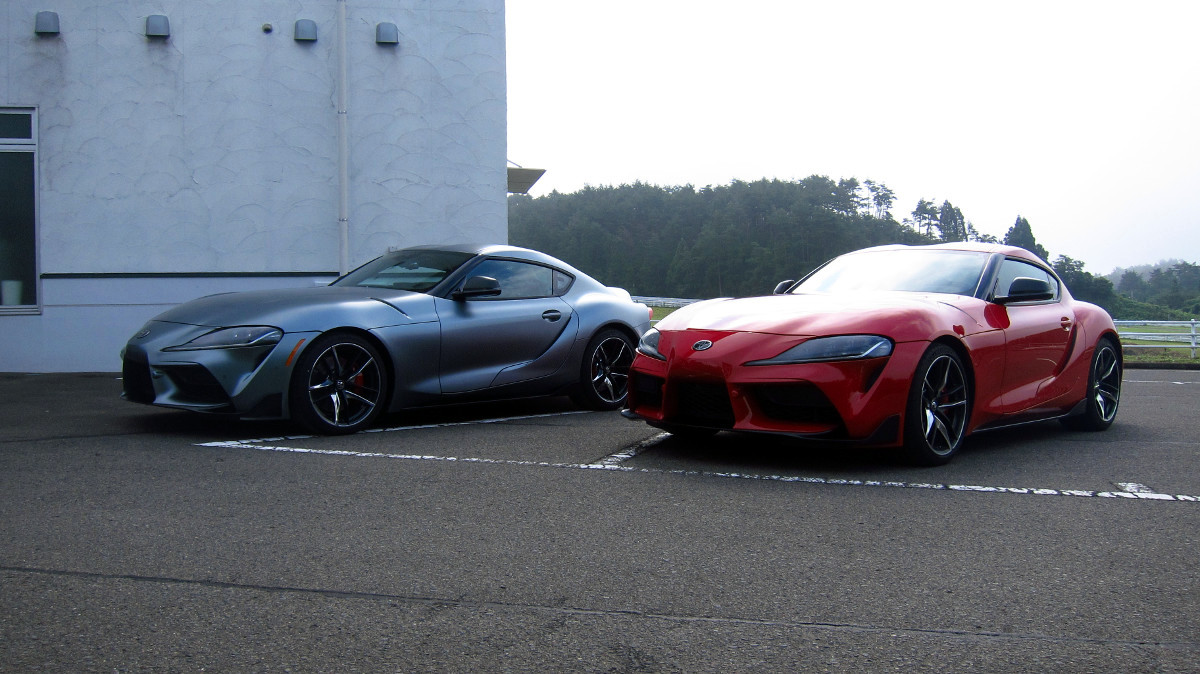 Icon reborn: Here’s why you should pay attention to the Toyota Supra
View other articles about:
Read the Story →
This article originally appeared on Topgear.com. Minor edits have been made by the TopGear.com.ph editors.
Share:
Retake this Poll
Quiz Results
Share:
Take this Quiz Again
TGP Rating:
/20