10 things we learned about the stunning Lamborghini Huracan Spyder 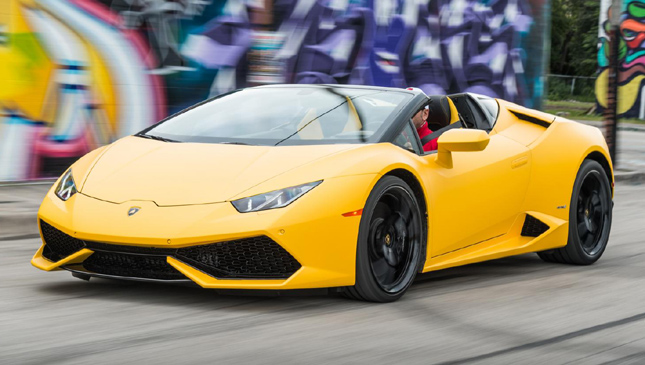 Silly as it may seem, the new Lamborghini Huracan Spyder is the Italian carmaker's least focused, most fashion-conscious new model. With 602hp and a top speed of over 320kph. That’s the pace of progress for you.

Thing is, the Huracan has had a difficult start in life. Is it too tame and not a "proper Lambo" (whatever that means)? And do its four-wheel drive and variable dynamic steering sully its credentials in the face of Ferrari, McLaren and Porsche’s roadsters?

We decamped to Miami Beach to find out. After hours of arduous research, we present our findings. 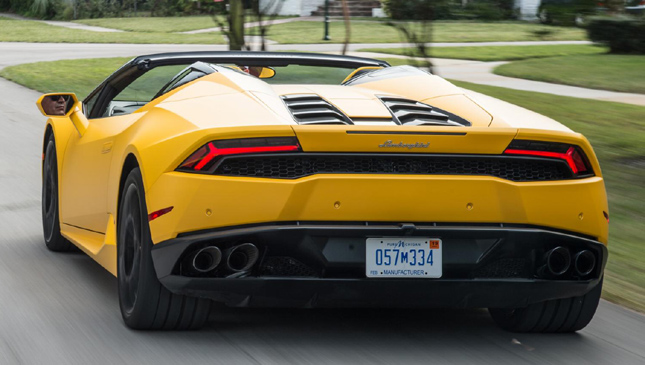 1. Weirdly, it’s a very civilized cabriolet. You weren’t expecting that, were you? Indeed, the Huracan has survived the chop with its dignity intact. The ridiculously cantered windshield deflects airflow into ducts just aft of the occupants’ ears, which is then vented out over the hot engine. It’s not at all blustery inside--you can have a pleasant conversation, or enjoy the V10’s song without losing it in the ensuing hurricane. The three-layer roof is well-engineered, and operable at up to 50kph. Well done, Lambo. 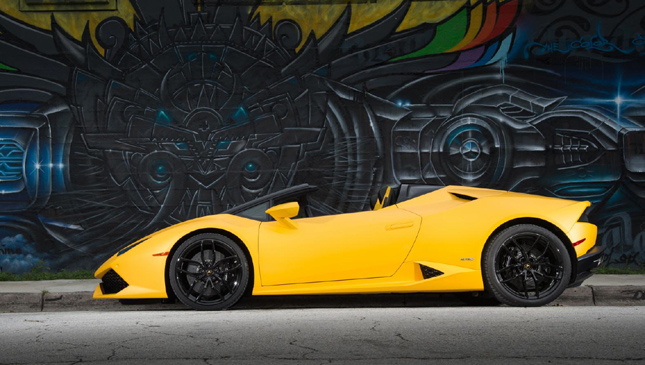 2. But it's no folding hardtop. Yup, that roof is a canvas job. Stephan Winklemann and company just don’t get the lust for folding hardtops, turning their noses up at the fact that a Ferrari 488 Spider or a McLaren 650S is mistakable for the fixed-roof cars in hood-up mode. No such fear with the cloth roof, says Sant’Agata. Even if it’s hailing ice the size of watermelons, surviving onlookers will be in no doubt that you’ve shelled out extra to have a Huracan with all the sky. 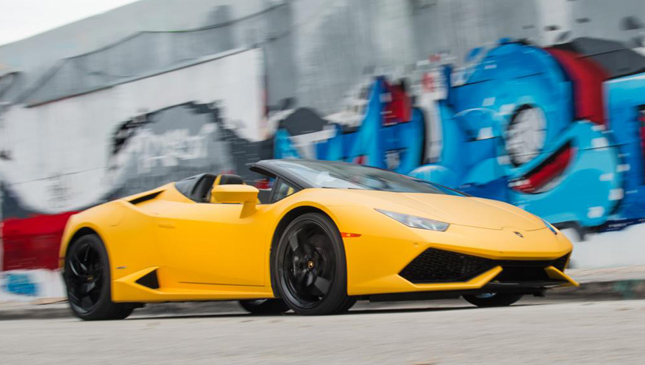 3. It sounds absolutely sensational. So does the Lamborghini Huracan coupe, of course, but there’s nothing like removing a few inches of metal and alcantara to crank up the fury. The Huracan’s sonorous engine and "industrial accident in a fireworks factory" exhaust just beg to be bathed in, and having the Spyder is like being in the royal box at Wimbledon--prime place for the action. 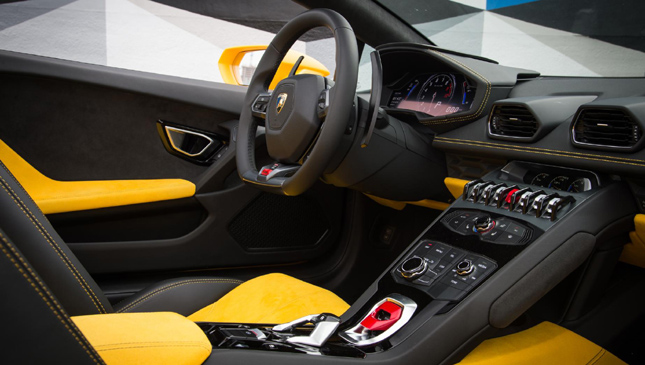 4. Dynamic steering is still weird...and no one cares. Should they have bothered with "dynamic steering"? Lamborghini says it will continue to develop and hone the system, which reduces the steering effort needed at low speeds for easier maneuvering, but even on the limited evidence of driving it around Miami, it still needs work. The sheer amount of weight thrown at the steering around 80kph is so utterly unwelcome, you find yourself wondering if the power steering assistance has broken altogether. Not that any buyers care, you understand--depressingly, the vast majority of Huracans have been specified with the feedback-bereft option. Bad news. 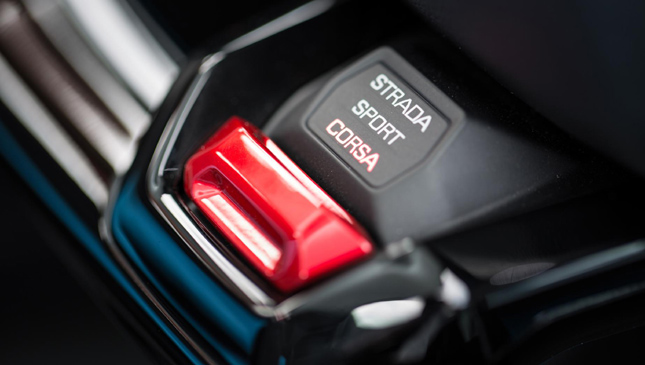 5. It's still crying out for a damper decouple setting. Everything from the Ford Focus RS to McLaren’s sublime 675LT lets you mix and match your modes, so you can have sporty throttle and gearbox response but also a softer suspension setting that is ideal for driving on, say, an actual road. Not so in the Huracan Spyder, which still lobs rock-hard ride in the Corsa mode pot, along with razor-sharp powertrain reflexes. Lambo says a solution is a top priority. 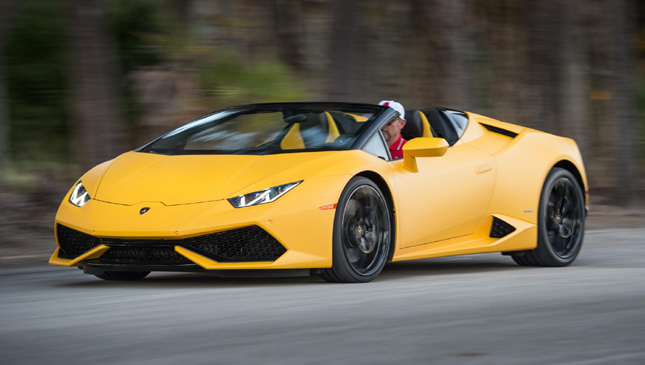 6. Turbos are not essential to a modern sports car. Look, turbochargers are incredible pieces of kit, but all too often, carmakers use them to crank out power outputs that are probably a bit higher than they could actually get away with. The Huracan is a great example of raging against the dying of the light. Yes, it "only" has 602hp, putting it way down on the Ferrari and McLaren rivals, but 0-100kph in 3.4 seconds, 160kph in 10.2 seconds and 323kph is hardly slow, is it? If you need more pace than that, you want your head tested, or a career as an astronaut. 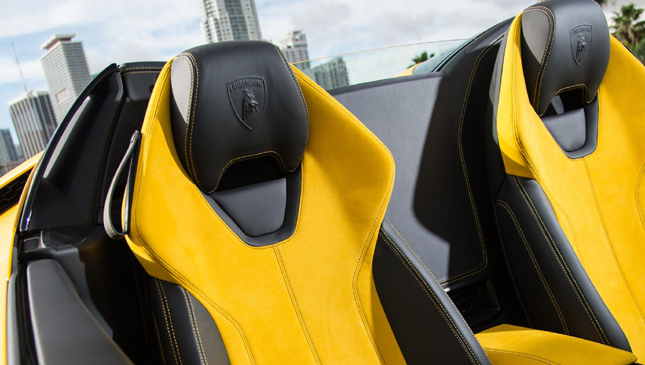 7. The optional carbon seats come close to ruining the car--and your backside. This is not an exaggeration. The Huracan Spyder is offered with the same carbon bucket seats as the coupe. They look divine, and are available in a wide range of garish colors. However, they have no padding whatsoever, and as a result, extended time perched on them makes it feel like your pelvis has suddenly become made out of knives and is trying to cut its way out of your bottom. This isn’t very comfortable. If you, like me, can’t afford a Huracan but fancy an experience that’s similar to sitting inside one, may I suggest sitting cross-legged on an unsanded fence panel for several hours. 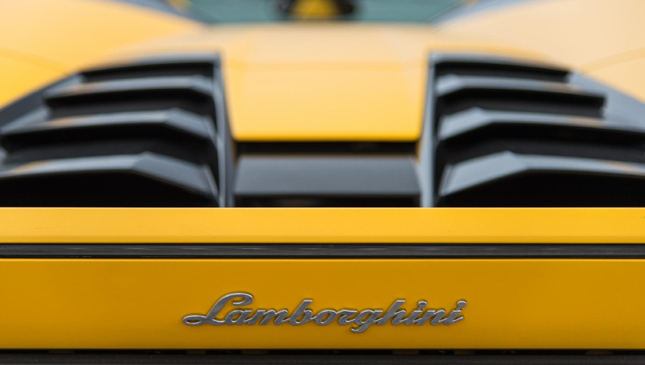 8. Only 15kg of the Spyder's weight gain has actually gone into making it stiffer. Remember the old days, when drop-top supercars were far, far more weighty than their fixed-roof twins because of all the lead piping and railway sleepers that had to be nailed in to stop them flexing? The Huracan doesn’t need any of that. The carbon-aluminum tub is so strong, only the windshield pillars have needed structural beefing. Yet it’s still 120kg heavier than the coupe, which is all down to the roof mechanism itself, the motorized buttresses, droppable rear window and hidden pop-up rollover bars. Considering Ferrari’s 488 Spider only swells by 50kg as a result of decapitation, the 1,542kg Huracan Spyder is left looking like a (very beautiful) porker. If you’re into that sort of thing. 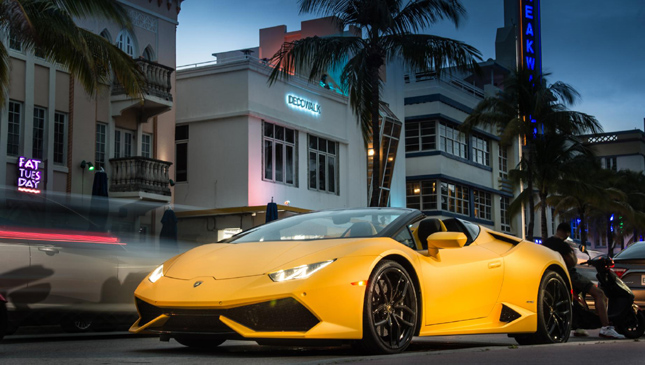 9. Instant celebrity status is assured. Miami Beach loves a Lambo. Especially if the roof is missing, it’s in a bright color, and it's making a naughty noise. Everyone from boy scouts to geriatrics squeals with delight and gazes at its pointy form when it heaves into view. This car makes you awfully conspicuous, and I’ve no doubt that exact fact is responsible for a good portion of its sales. Please be aware that away from Florida, reactions may vary. 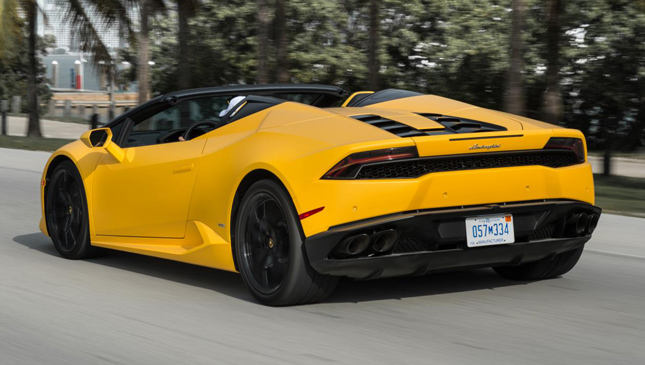 10. There's plenty more to come from the Huracan. On the subject of making a rear-drive LP580-2 Spyder, or a hardcore rear-drive model to sit alongside the incoming Superleggera, there was much grinning and winking from Lamborghini CEO Stephan Winkelmann and head of R&D Maurizio Reggiani. So if you’re holding out for a weapons-grade Huracan, watch this space. 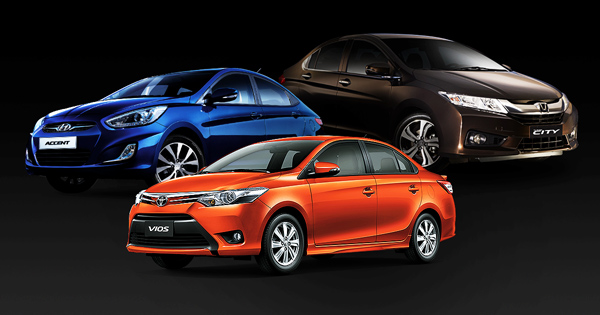 Spec-sheet brawl: Toyota Vios versus Honda City versus Hyundai Accent
View other articles about:
Read the Story →
This article originally appeared on Topgear.com. Minor edits have been made by the TopGear.com.ph editors.
Share:
Retake this Poll
Quiz Results
Share:
Take this Quiz Again
TGP Rating:
/20