Which McLaren supercar is which?

Many numbers. Much horsepower. A three-tier road-car range that ranges in power from 540hp to 1,036hp. McLaren it seems, is rather serious about this whole ‘performance’ business.

There are three levels: the Sports Series, the Super Series, and the Ultimate Series. And yet, despite McLaren telling us the cars are all different and share only a modicum of DNA—the carbon tub, the engine—you’d be forgiven for getting them a little bit mixed up.

Top Gear, then, is here to help. We’ve compiled a handy spotter’s guide—a big list of every modern McLaren supercar built in this new age of Woking’s performance car business. Some have sold out already, some you can buy. All, however, you can gawp at... 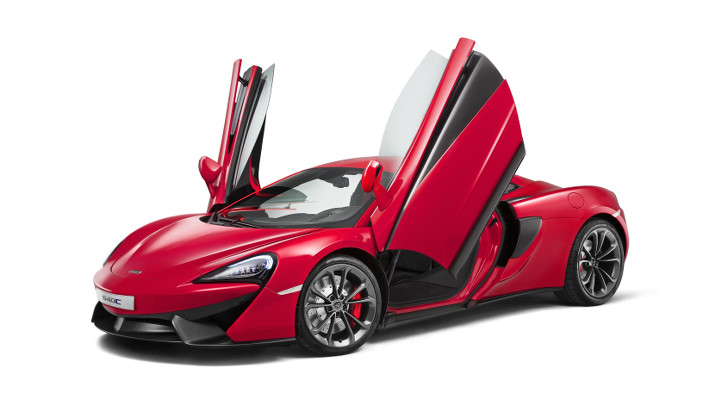 “The ‘MonoCell’ carbon tub remains the same, too, though here, it’s been redesigned to make getting in and out of the thing easier. Aluminum body panels also help keep the weight down to 1,311kg—just 2kg lighter than the 570S.” 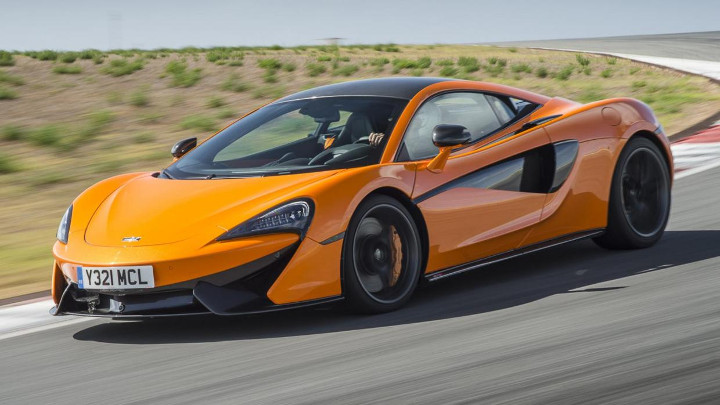 What we say: “Where Ferrari favors steering so quick, it’s almost nervous, this McLaren feels, well, peerless. It’s feelsome and direct, and puts the car exactly where you want it.

“This feel and sensitivity bring colossal confidence. It helps that the car never seems to grow around you or lose its agility. Instead, you get utterly caught up in the process of accelerating, braking, steering, shifting. Because the suspension isn’t trying anything too tricky, it feels beautifully natural, and the car moves with the road.” 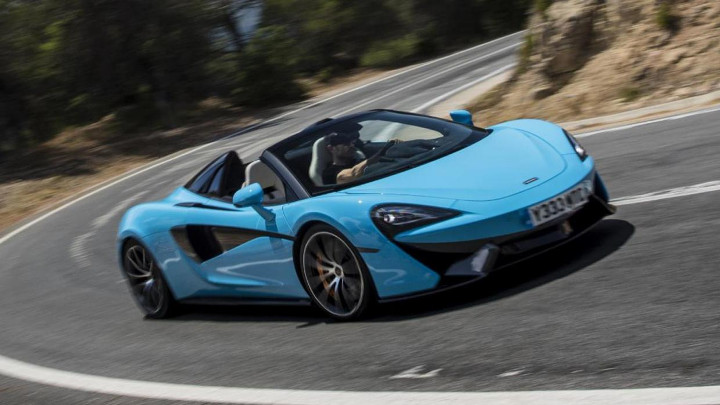 What we say: “It becomes the fourth variant of McLaren’s Sport Series range—alongside the 540C, the 570S Coupe, and the 570GT—and, most important, will allow you to go 315kph flat-out (where applicable) with the roof down. [insert your own toupée gag here]

“You simply push a button, and that folding hardtop opens or closes in 15sec, at speeds of up to 40kph. Further—and just like you can on an Audi R8 V10 Spyder—there’s a wind deflector that can be raised or lowered with the roof up (and down, obvs). The upshot of this is when the weather is poor but you need noise…” 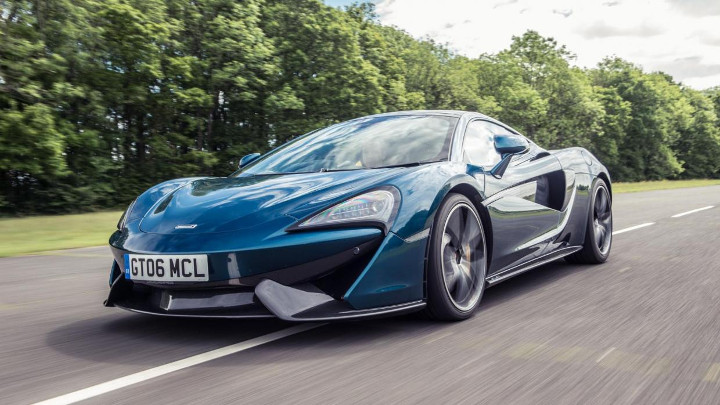 What we say: “There’s magic here. It’s a marvelously engaging thing. The cornering is connected and confident, happy to give you options. The steering is all feel but little corruption. As ever in a McLaren, the carbon tub has a stiffness and integrity you can always sense.

“The engine might not be the best-sounding V8 in the world, but it chases to 8,000-plus like it’s running away from a volcano. (It was, where we drove it, albeit a dormant one.) The gearshift is alert, the ratios well-chosen.

“So it’s properly fast, yet not intimidating. Everything just gels.” 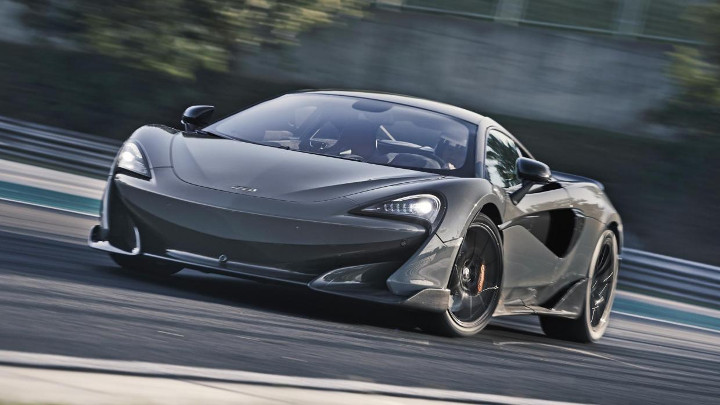 What we say: “Key word: dissection. This is the one thing I took away from the 600LT—the sheer feel, accuracy, precision, and control it gives you. In this regard, it’s even more impressive than the 675LT.

“It’s how the 600LT gets itself into the corner that most impresses. And that starts the moment you hit the brakes. The pedal is reassuringly firm, the bite is huge, and the ABS barely intrudes, so it feels like the car has basically snagged an aircraft carrier’s arrester wire. There’s barely any dive and no differential to get twisted up once you start to turn, so the LT is clean and flat into the corner. 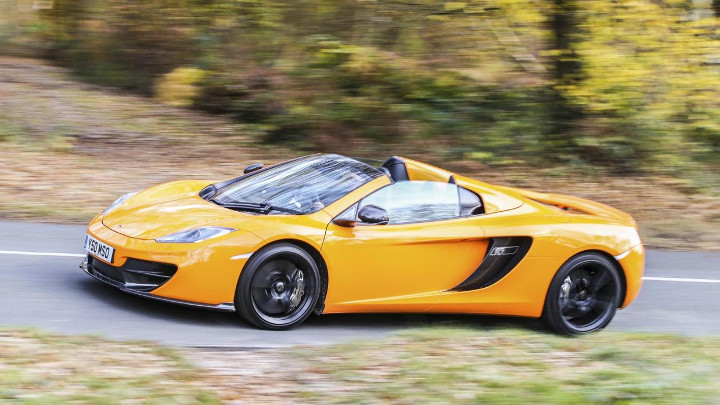 What we say: “Below 3,000rpm, not a huge amount happens. But keeping your foot on the throttle around there is like loitering around a lit firework, waiting to see if it’s actually going to go off. When it does, you’ll blooming well know about it.

“Burst through that point of the rev range and the 12C has the frenetic runaway sensation of the very best turbocharged cars, where the view out the side windows is moving at a quicker rate than your brain can fully handle.” 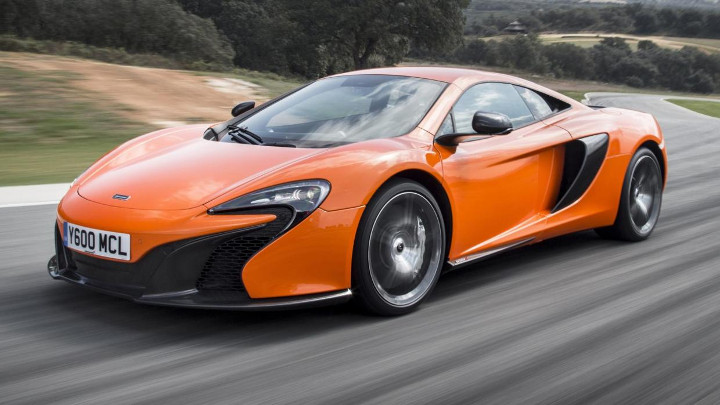 What we say: “Choose a middle gear, settle into middle revs, and prepare to be flabbergasted. Floor the throttle and the McLaren’s newfound surge is stupefying, a mountain of mid-range turbo’d torque that blends into a cascade of glass-sharp power searing toward 8,500rpm.

“This is performance at a level well beyond any V8 Ferrari or V10 Lambo. And McLaren’s engine now lacks little in progressive throttle response or aggressive sounds.” 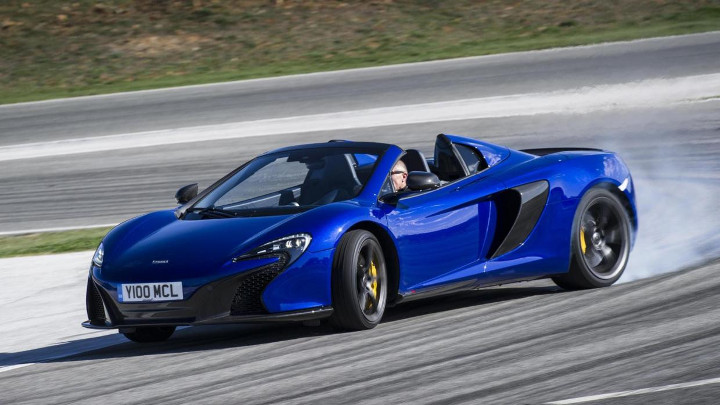 What we say: “The Spider has a hard roof so is as protective as the coupe when the roof is up in place, and it looks almost as good, and has almost as much storage space. Roof down, there’s a whole new level of sensation and noise and drama. Eight out of 10 McLaren-owning cats prefer the Spider.” 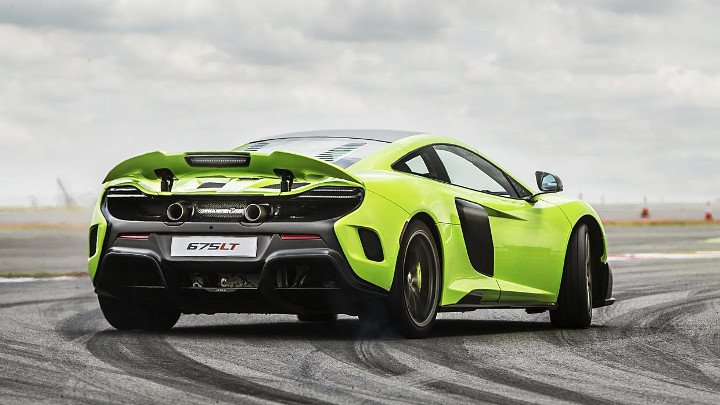 What we say: “The result is a car that attacks corners with an insatiable hunger, relaying every morsel of information into the palms of your hands, while remaining astonishingly composed over sudden crests, surface imperfections, or ugly camber changes.

“Rarely have compliance and cornering agility come together to such spectacular effect.” 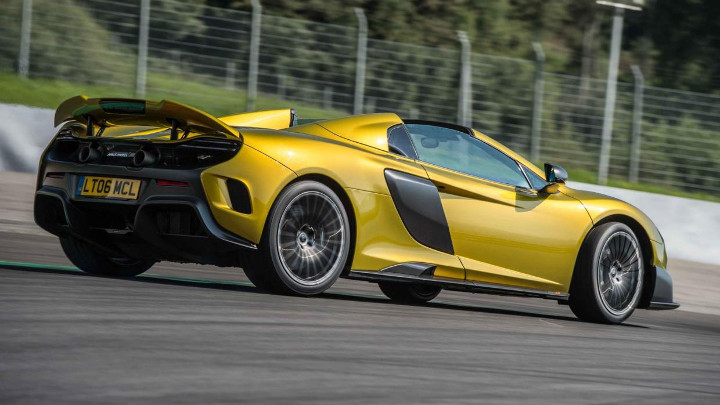 What we say: “Because the 675’s carbon tub is so strong, McLaren says no extra reinforcement was required for the convertible. Which means the 675LT Spider remains light—with a dry weight of 1,270kg, it’s some 100kg more lissom than the not-very-heavy-at-all 650S Spider, and just 40kg heavier than the 675LT Coupe. Thank extensive use of carbon fiber for the bodywork.

“The roof is McLaren’s favorite three-piece folding hardtop, carried over wholesale from the 650S Spider. It can be opened at speeds of up to 30kph, which would be helpful but for the fact it’ll prove all but impossible to travel as slowly as 30kph in the 675.” 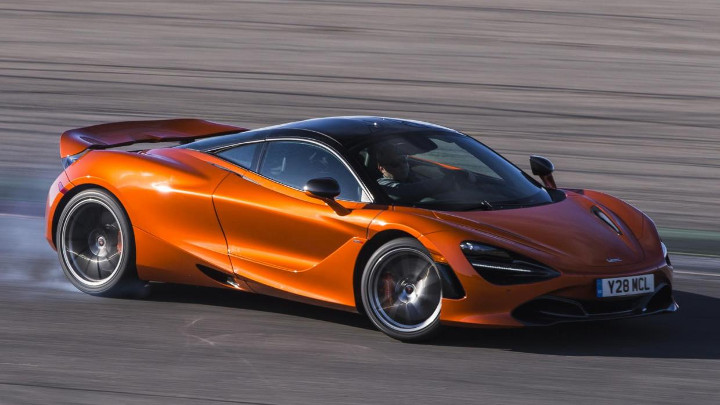 What we say: “We’d go so far as to say this is probably the single most accomplished supercar we’ve ever driven, which is not the sort of statement we make lightly. Remember, though, that McLaren was burned back in the day by a perceived lack of soul in its early cars, and we all know that it’s the indefinable bits that usually elevate a supercar.

“First impressions here are great: Steering feel is impossible to measure objectively, but the 720S has that road/car/driver telepathic thing absolutely nailed—it moves like a big Lotus Elise.

“It’s monumentally fast, possesses the sort of high-speed balance and stability that bespeaks absolute mastery of aerodynamics, and somehow refuses to punish you even on truly execrable road surfaces.” 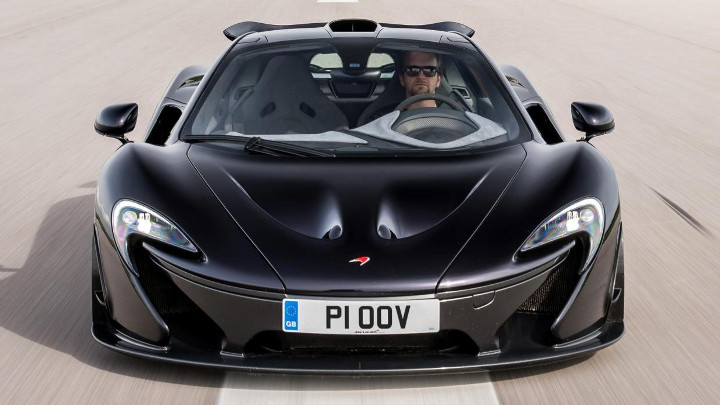 What we say: “It feels a bit like a beautifully made Lotus, light and agile and clear. The tech all works: Press the EV-mode button and the V8 dies and you can drive around on just electric (we managed 11km on the highway at 129kph in Europe, and more in town). And when you let everything off the leash? It’ll shatter your idea of what fast really means. Warp time.” 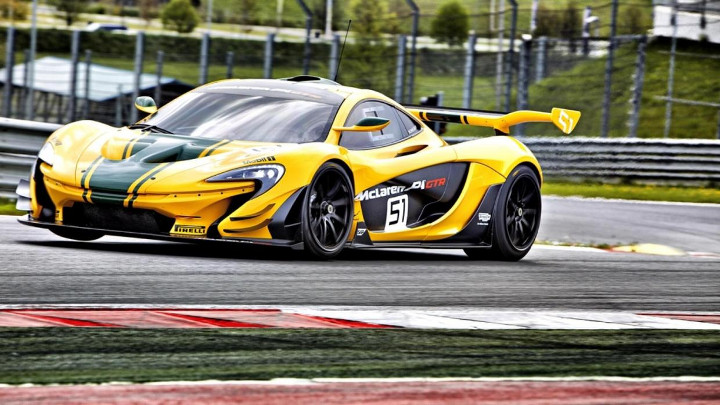 What we say: “How has McLaren managed to make a 986hp car this approachable, this drivable? The setup is astonishing. There’s so much feel through the chassis, the steering is so beautiful to use, you always know precisely where you are with it.

“You can take it to the limit—how ridiculous is that in a car with an Ariel Nomad’s weight of downforce working on it? The speeds are outrageous, just bananas, but the GTR is so talkative and engaging that you can use everything it’s got, rely on the whiff of understeer to let you know the car is working hard.” 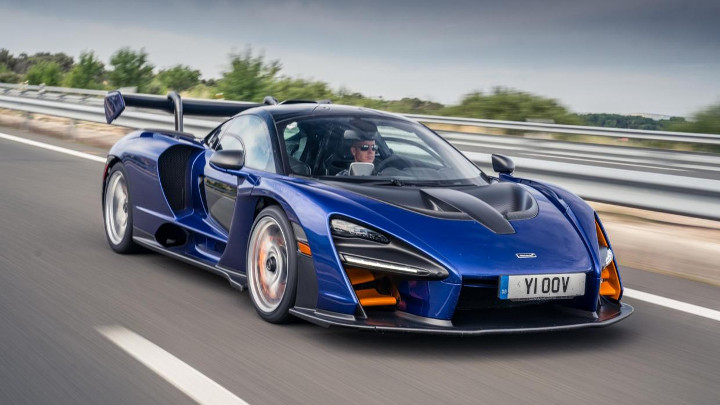 What we say: “There is a sense here that the Senna is a bit too professional, a bit too advanced in its abilities and limits to be accessible, a bit too ruthlessly clinical, maybe. But that’s the sort of car it is—a car that’s better than you are, a car that’ll rip tracks to pieces and leave you sweating and breathing hard. An adrenaline rush.

“But a very polished one—it’s notably less edgy than a P1 GTR for instance, still detectably a road car underneath, with a bit of bandwidth at the edges. You might get sweaty everywhere else, but it’s not a car that’ll give you sweaty palms. Well, apart from the first time you think you’ve out-braked yourself, only to suddenly discover you’re now going very slowly and are still some distance from the corner…” 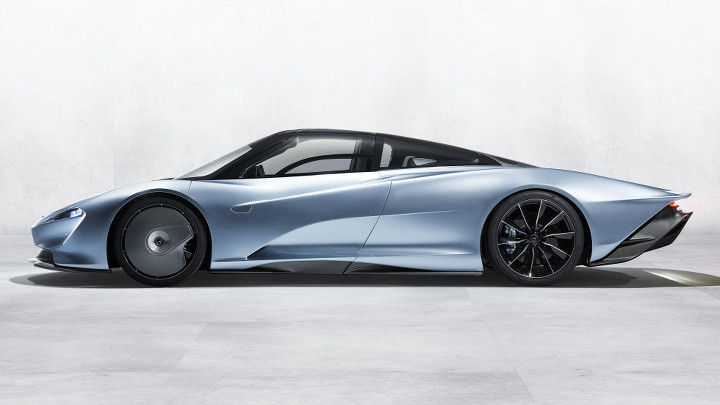 What we say: “Let’s rein in hyperbole and exaggeration right now, because here’s what we do know: The McLaren Speedtail will, when deliveries start in early 2020, have cost each of its 106 owners north of £2.1 million (P144 million) for a car that boasts 1,036hp and a 402kph maximum speed. When they do strap themselves into the center seat, line up on a runway, press the Velocity button above their head, and nail the throttle, they’ll feel what it’s like to accelerate from zero to 300kph in the same time it takes a diesel supermini to hit 100kph.” 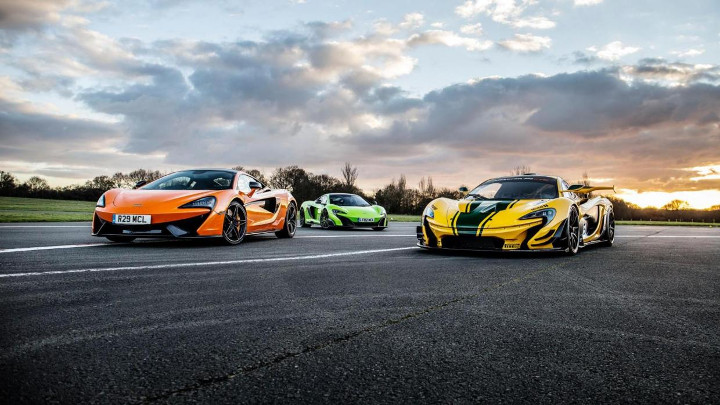 Haha! Not really. McLaren categorically won’t do an SUV, despite its major rivals all committing to big, luxury 4x4s as part of the portfolio. Want to know the reasons? Click here. 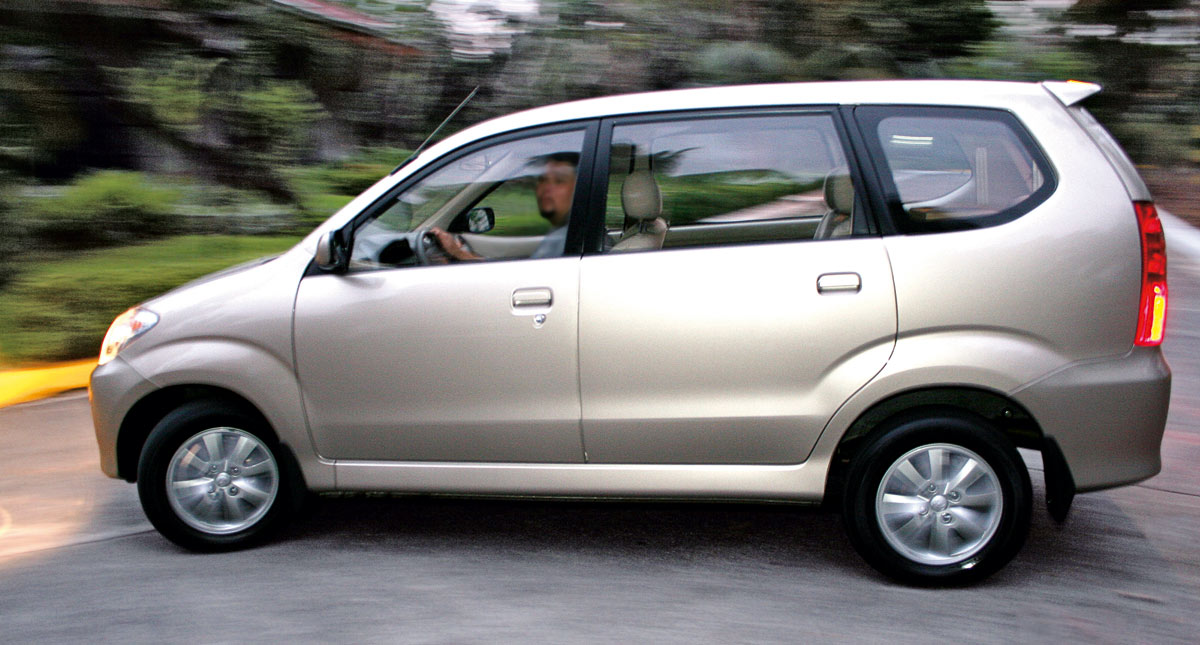 Toyota Avanza: This was where it all began
View other articles about:
Read the Story →
This article originally appeared on Topgear.com. Minor edits have been made by the TopGear.com.ph editors.
Share:
Retake this Poll
Quiz Results
Share:
Take this Quiz Again
TGP Rating:
/20