Towing a Lambo with a Lambo

Lamborghini’s people were reluctant to have us towing an open trailer. They thought it’d make the Huracan look like it was broken down. Plus, the masses involved are stomach-churning: We’ve got 1.6 tons of fuelled-up Huracan and .9 tons of trailer to haul, plus the Urus’s own 2.2 tons. But it refuses to break sweat. The 641hp twin-turbo V8 still manages to outrun the photo team’s Jaguar F-Pace.

It makes quite the bellow doing that, but the rest of the time the engine falls to a murmur, and surprisingly the tires don’t roar, either, so it’s an easy job for the B&O stereo to dominate. I could easily forget I’ve got the trailer at all. Except the sight of a supercar’s ass in my rear-view mirror never ceases to surprise me. (We loaded it that way round to keep the V10’s mass close to the trailer axles.) Picture too the double-takes of the folk who come across a yellow Lamborghini reversing at speed up the middle lane of the highway. 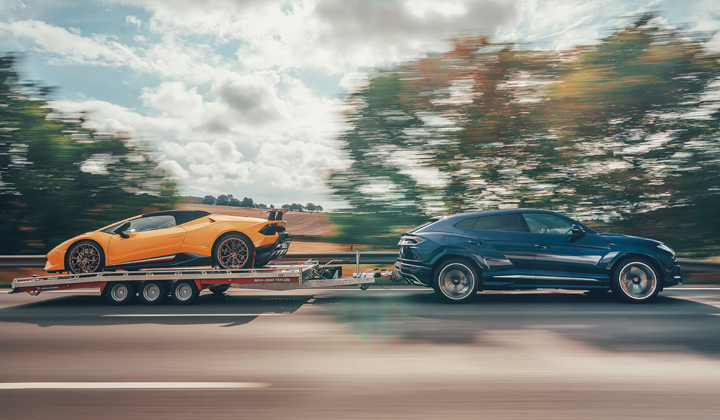 Early next morning, we get to drive the Performante.  Lamborghini’s V10 has an instantaneous and infectious vivacity, even at low revs, hurling the car ahead through the mid ranges, and then, just at the point where your turbo-accustomed fingers are involuntarily moving towards the up paddle at 6,000rpm, this awesome unblown engine takes on a whole new magnitude of urgency and pelts onward. Only after another 2,500rpm of awe is its rabid energy finally bridled. Then you tap that paddle and the thing sawtooths on for another magical round in the next gear. Corners are coming. Carbon-ceramic discs bite down on the speed, and the car dives in. It disposes of curves majestically, never losing its level or its tenacity. Oh, in a damp second-gear it’ll edge its tail out if you insist, but the drama is tidy. Mostly, it just grips, even at speeds where that aero can’t be doing much.

Even beyond the drastic longitudinal and lateral g-loads, what makes the Performante such a vivid joy is its sensations. You touch the tires, knowing how their grip changes as first the fronts, then the rears, negotiate a bump or dip, and the engine wires itself into your nerves and your cochlea. The roof is down, too, for more sensation at every speed. The motion envelops me from every quarter. 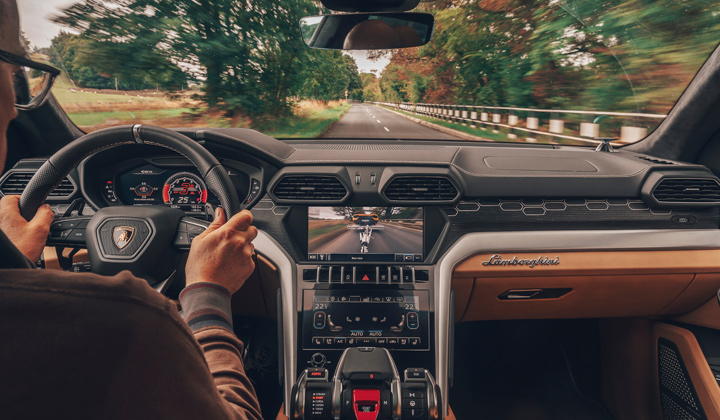 I return, eventually, to a halt at our layby, if only to let my heart regain its composure. Seems fair to unshackle the Urus from the trailer and see what it makes of this road.

It too can be ridiculously rapid. It’s the fastest SUV sold anywhere. The mass doesn’t seem to impede its progress. By the magic of every one of VW Group’s chassis technologies, and one or two tweaks unique to the Lamborghini division, it manages to grip like crazy, roll very little, understeer not much at all, and ride pretty well. But, critically, it misses
the intangibles that make speed thrilling. The steering and engine are muffled, the pedals indistinct in their answers. 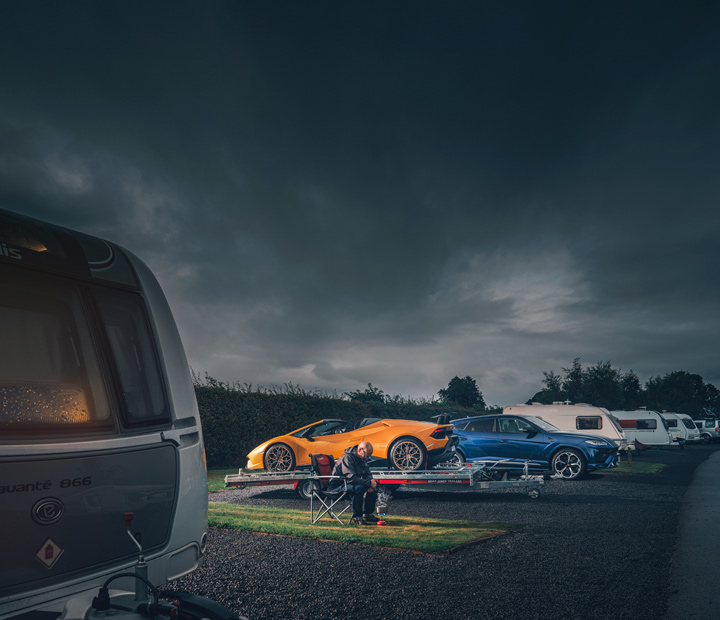 Look, the Urus is ridiculously capable. At a motorway cruise, even with the trailer, it’s largely silent, abundantly luxurious and almost drives itself. It carries four people and their stuff over any terrain. And it’ll keep up with 99% of sports cars in straights and corners. By any reasonable metric, the Urus can do anything. But that’s the point. Lamborghinis are Lamborghinis because of what they can’t do. Can’t carry your kids or your stuff , can’t cosset you, can’t calm down, can’t compromise, can’t stop making demands. Absolutely can’t go incognito.

The Urus can. People didn’t spot it was a Lambo at all. It’s quiet normally, its note the soft, generic one of a V8 with 90-degree crank and turbos. Said ‘barrage of exhaust noise overlaid with a fusillade of pops and bangs is in truth wholly artificial, happening only on cold-start or in the aggressive button-modes. In contrast, the Performante’s engine is all character, all of the time.

The shape of the Urus’s body has the same issue: largely a generic SUV in outline and proportion, with a load of falsified creases overlaid to get your attention. The Huracan has real Lambo proportions and so benefits from authentically calm panel surfaces. The blue car is super-competent across a huge spectrum, yet I can’t love it. The yellow one is mostly pretty useless, but in its element it’s adorable. Still, today the first one has got us to the road where I drank in the second’s transcendent best, and for that I’m grateful to it. 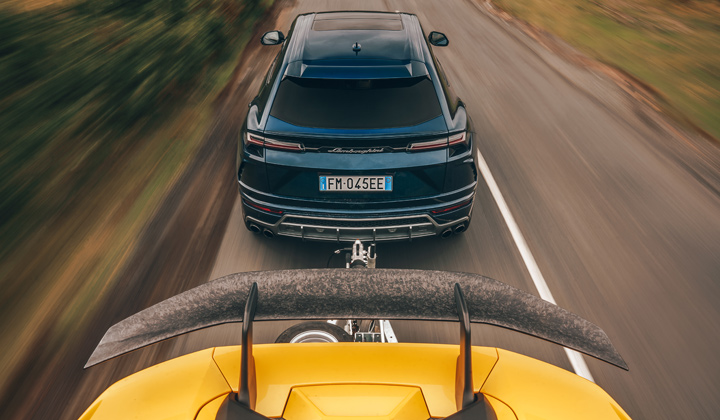 Note: The story first appeared in Top Gear UK's October 2018 issue. Minor edits have been made. 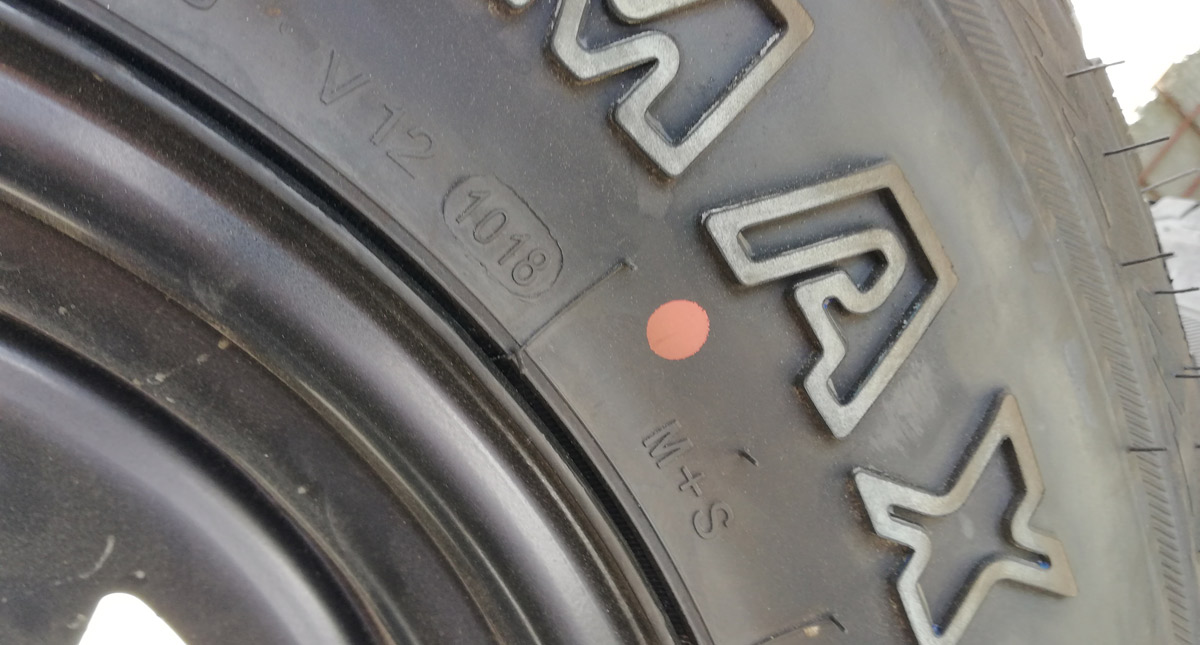 Do you know what those colored dots on the sides of new tires are for?
View other articles about:
Read the Story →
This article originally appeared on Topgear.com. Minor edits have been made by the TopGear.com.ph editors.
Share:
Retake this Poll
Quiz Results
Share:
Take this Quiz Again
TGP Rating:
/20