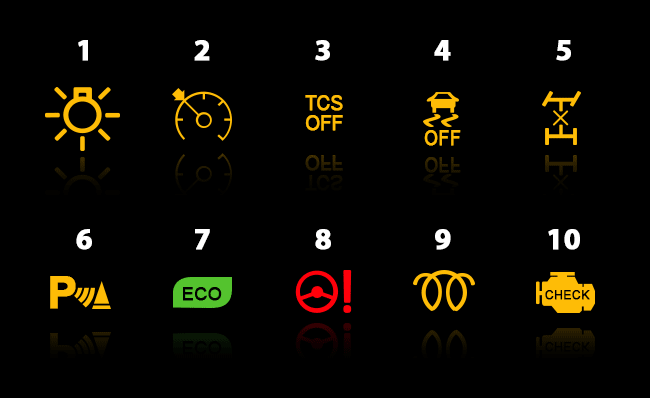 We could do a dozen of these articles on dashboard lights, but we've limited our list to the ones that will most affect you while driving. Also, as technology progresses, more and more of these symbols are giving way to text messages and warnings on new Multi-Information Display systems. Still, there are some indicators that are so basic, they're universal.

1. Bulb indicator. This shows you that you have a dead bulb. Not all cars have this, but it's a helpful warning.

3. Traction control indicator. This tells you the traction control is off. You probably already knew that, too, having turned it off to do burnouts on the parking lot. And now your wife knows that, too, if the smell didn't tip her off in the first place. A blinking traction-control light indicates that the system is preventing wheelspin. In which case you should either: (a) let off the gas a bit and drive a little slower; or (b) let off the gas a bit and drive much slower. Your choice.

5. Center differential lock (or 4Hi/Lo) indicator. This indicates that the center differential on a car with part-time four-wheel drive has been engaged. We can't stress this enough: Part-time all-wheel drive is not meant for on-road use, and running it on dry tarmac can cause "binding" and other problems. We've heard sob stories from dealerships where customers had to pay for costly repairs because the latter didn't realize this.

6. Proximity sensor indicator. Some cars have proximity sensors all around instead of just the rear bumper. This helps you park your big, cumbersome vehicle in tight parking spots. It also makes for incessant buzzing as motorcyclists and pedestrians filter around you in traffic. Recognizing whether it's on or off can help prevent a nasty scrape.

7. Econ indicator. This can mean different things on different cars. Some cars use it to tell you that Economy mode is engaged, which means that the accelerator and the transmission are in their most relaxed mode. On some cars with cylinder deactivation, this tells you that the system is turned on (typically when you're cruising or coasting), and half your cylinders are not burning gas at the moment. On other cars, this lights up when you are driving in an "economical" manner, and it can be used as a training tool for good, efficient driving. Other cars use color-changing dash lights for the same purpose. They're educational, helpful and rather cool.

8. Electric power steering indicator. This indicates a fault in the EPS system. It could mean temporary overheating of the assist motor or a major fault in the system. Electric steering motors are usually compact, and violent sawing at the wheel can sometimes overtax them. This can happen when you're doing a 30-point turn in a tight garage, or when you're banging cones on a tight autocross. Best let things cool down and see if the problem goes away; otherwise, it's time for a checkup.

9. Glow plug indicator. Lacking spark plugs, diesels rely on pressure and heat to burn their fuel. As there's little heat in the motor when you first start it in the morning, glow plugs heat up the fuel coming out of the injectors to give the motor a better chance of starting. The light should turn on briefly after you switch the ignition to the 'on' position. Once it's off, the plugs are hot enough to start the car. A flashing light may indicate busted plugs, but some cars use the glowplug light as a catch-all indicator for problems ranging from bad injectors to exhaust gas recirculation valve issues. Get it checked as soon as possible.

10. Check engine light. We've saved the most crucial indicator for last. This is a confusing--and often maddening--warning light. It can signal any number of issues or faults with the sensors and electronic equipment on the engine, some of which are serious, some of which are not. The most common cause is a busted exhaust oxygen sensor, which is bad for emissions but won't prevent your car from running. Other common causes include ignition coil and spark plug problems on gasoline cars, or an issue with any of the dozen-odd sensors that keep your engine happy. Even if you think it's nothing serious, don't ignore it. Have your car subjected to a diagnostic scan as soon as possible.

Instagram post of the day: This is Captain America's preferred ride
View other articles about:
Read the Story →
This article originally appeared on Topgear.com. Minor edits have been made by the TopGear.com.ph editors.
Share:
Retake this Poll
Quiz Results
Share:
Take this Quiz Again
TGP Rating:
/20