A peek inside the 2020 Porsche Taycan’s advanced cabin

It’s screen time. Here’s the dashboard of the Porsche Taycan. Yes, the endless tease of Stuttgart electro-sedan fact-ery continues. We’ll see the actual entire car next week, by the way.

Top Gear has seen, stroked, caressed, and generally fiddled about with this dash. It’s gonna take a bit of getting used to, but the potential is impressive.

Most striking is the giant curved, free-standing instrument display, nearly 17 inches across. Unlit, it’s just a black polished piece. It looks like the sort of thing you see laid on its back on a countertop in the brochure for a high-end kitchen, holding four artfully placed pink grapefruit. 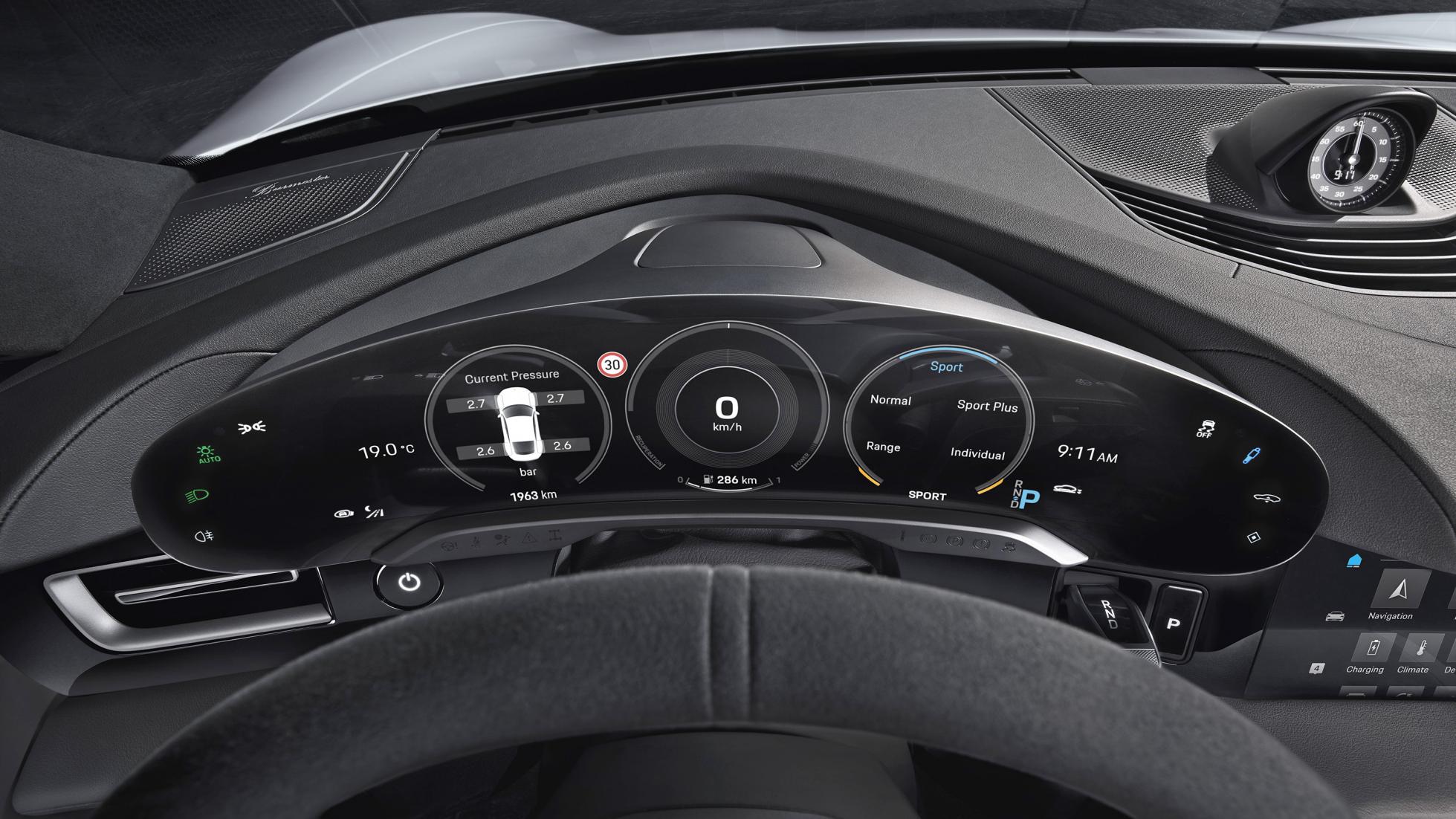 Once the ignition’s on, it shows facsimiles of Porsche’s traditional dials. The center one covers speed and power, and it, too, is digital—unlike the real tach in the center of a new 911’s panel. The outer two circles can be reconfigured in a vast array of options, including the usual infotainment, maps, trip computer, and all.

Porsche claims the anti-reflection coating means it doesn’t need a shading hood for sunny days. We saw it in a garage, so can’t comment. Uniquely for an instrument panel, this screen has touch capability, too, with some buttons on the left and right ends for headlights and chassis modes.

The whizzo tick box is obviously going to be the optional passenger screen. The person sitting alongside you won’t be able to shut off the ESP, duh. But they can enter a navigation destination, sort out the entertainment and see car info. It goes black if a sensor says there’s no passenger.

The lower of the pair of console panels mostly takes care of climate. It’s got haptic feedback to help guide your fingers. Hit a virtual button and it shakes; miss the button and it doesn’t. This screen also has a space for handwriting recognition. The same panel shows charge info when you’re stopped, but when you’re moving, it doesn’t have other functions because it’s below line of sight and shouldn’t be a distraction. Like fiddling with the rest of the screens won’t be a distraction... 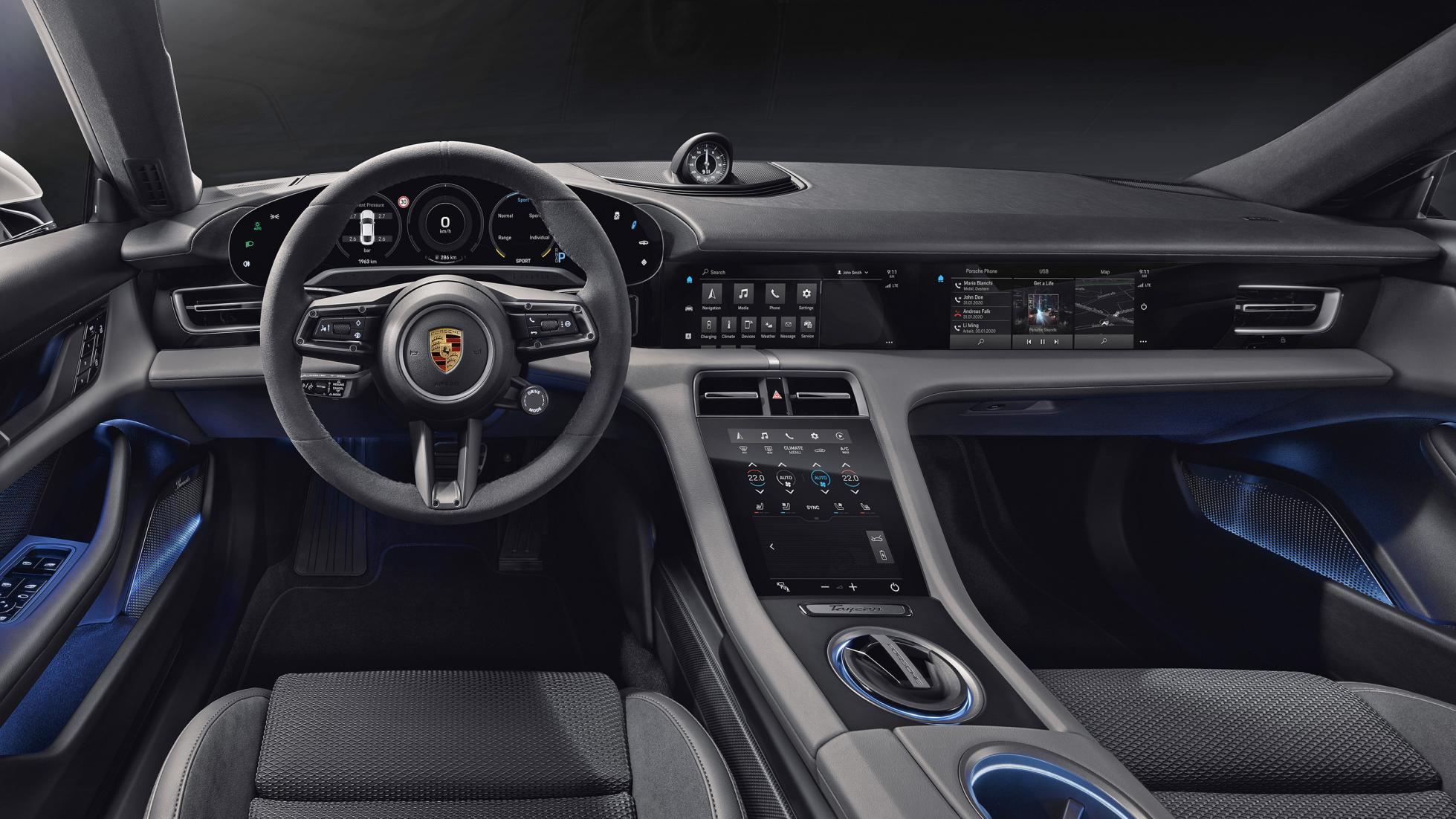 Next up the main center display, a 10.9-inch touch panel. Pretty routine by the standards of the rest of it. That’s got a home screen, then also a widget screen where you can set up your preferred shortcuts. Routine, but well advanced.

Other options include a head-up display, screens in the back for entertainment and climate zones, and a major-league Burmester stereo. The system is prepared for over-the-air updates, for the infotainment at first, and later the deeper workings of the car itself.

And the direction of air from the vents is controlled not by moving a knob on the vent. Oh, no—it’s far less intuitive than that. As with a Tesla (and the current Panamera), you have to go into a menu, then swipe a virtual knob that causes a heavy, expensive, and complicated series of motors to move the vanes in the vent in the commensurate direction. Porsche says it’s more versatile, more configurable between drivers, and allows a neater dash design. We couldn’t help laughing. 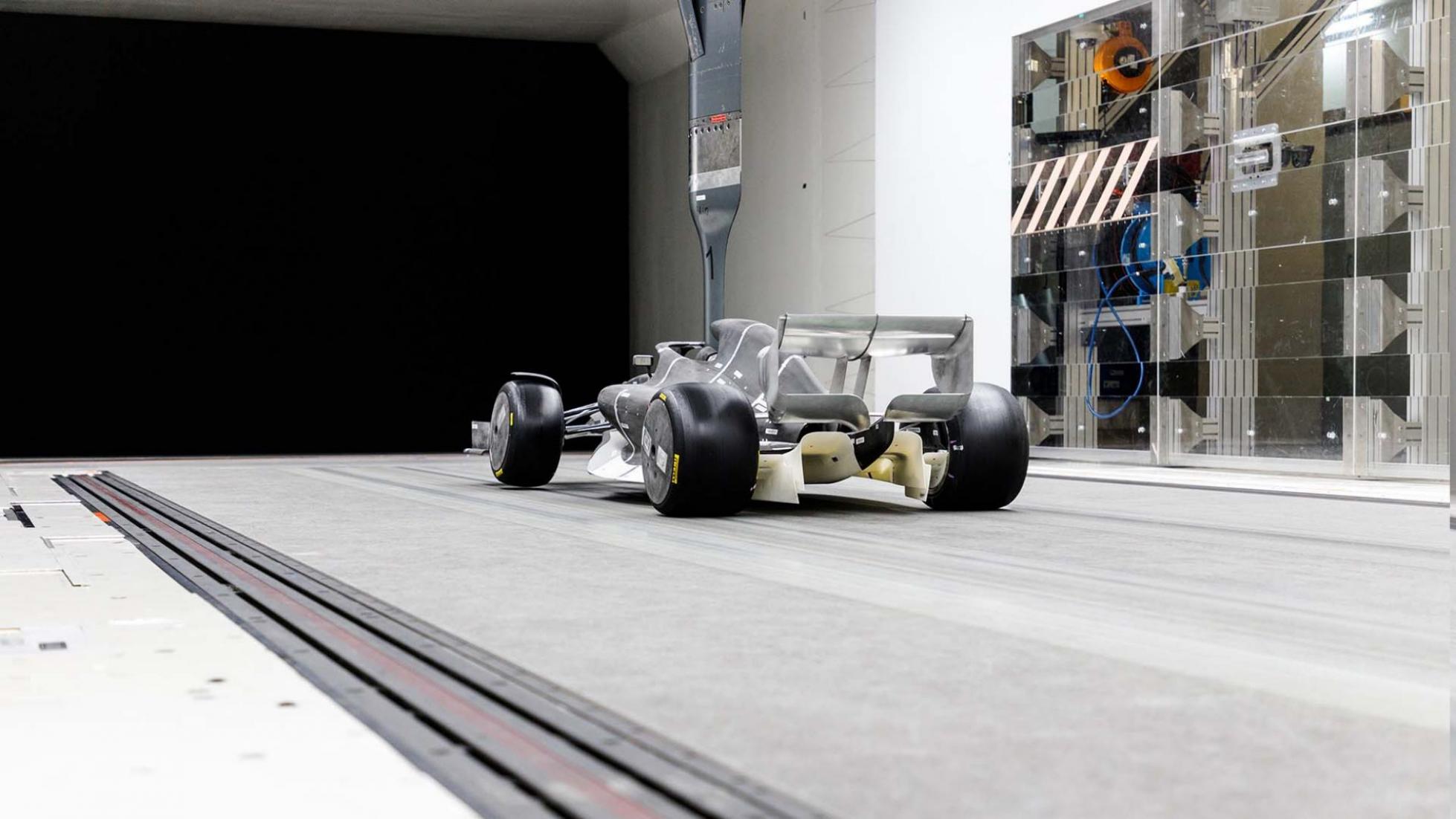 Behold, the F1 car of 2021
View other articles about:
Read the Story →
This article originally appeared on Topgear.com. Minor edits have been made by the TopGear.com.ph editors.
Share:
Retake this Poll
Quiz Results
Share:
Take this Quiz Again
TGP Rating:
/20