Is the mean-looking Avtoros Shaman the ultimate adventure vehicle? 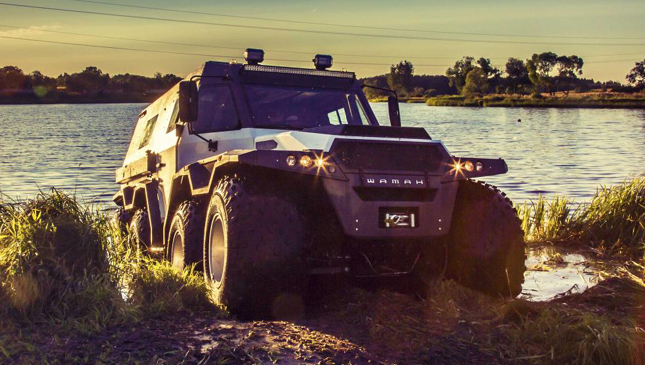 "There are no roads in Russia, only directions." So, apparently, said Napoleon Bonaparte, the man who led the French invasion of the world’s largest country. It’s a quite highbrow historical reference to help explain the Avtoros Shaman, the 8WD beast you see before you.

Why is a two-century-old quote relevant to a bonkers extension of the SUV market? Because Russia, despite its vast scale, really is quite short of roads. As such, its people have churned out a variety of solutions on how to cross its terrain, some of them more ingenious than others. A Lada Niva on tank tracks, for instance.

The Shaman, however, is an altogether different proposition: a ground-up all-terrain vehicle that has been 10 years in the making. It’s a product of the youthful, post-Soviet generation keen to make local produce something to be proud of, with a fastidious approach to keeping components and materials homegrown.

Avtoros managing director Vladimir Volkhonsky tells me the Shaman will suit everyone from hunters to first-aid crews to mineral resource explorers, even describing it as an alternative to a helicopter, so unhindered is the access it allows. As such, all sorts of specs are possible. More curious options include beds, minibus seating and a propeller. While most of the 15 Shamans so far have been purchased on company expenses, there’s more than a nod and a wink to suggest those buying are actually indulging a less mature, personal desire.

Its power figure wilts beside most repmobiles, a 3.0-liter turbodiesel from an Iveco van--regretfully sourced from outside Russia because local engines weren’t up to the job--providing 176hp. The most jaw-dropping number, irrelevant as it may ultimately be to most of us, is the cost. Nine million rubles may be a price best portrayed via a Doctor Evil impression, but it currently converts to a much saner-sounding £88,000 (P6.1 million). Get lavish with the options, and you’ll only just nudge £100,000 (P7 million).

Inside, there’s a central driving position. But notions of McLaren F1 glamour are quickly canceled out by a seat resembling that of an '80s Fiesta. Such basicness betrays the bargain price tag.

But then it operates with the turn of a key, while the steering wheel, the dials and the six-speed manual gearbox are all decidedly conventional, too. With my driver training from Vladimir on a 40-second delay--it’s being relayed from Russian through an interpreter due to his pidgin English--such simplicity is something of a relief. 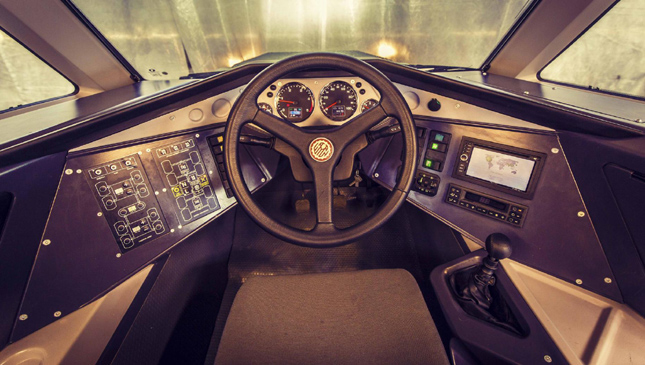 If, like me, you’re surprised the Shaman doesn’t drive its wheels through an automatic gearbox, then Vladimir cites both technical difficulties and the fact a manual transmission is "the sign of professionalism," here as much as in a sports car. It is, perhaps unsurprisingly, a notchy shift, while the gears are ludicrously short. The top speed is 80kph, but it’ll get there at a respectable lick for its size.

What takes a little more learning is the control panel immediately left of the wheel; a bunch of buttons lock or unlock each of the four axles for when inclines and declines are particularly steep, while others activate the eight-wheel steering, the self-developed component that Vladimir is most proud of.

There are two modes for this: one to angle the rear four wheels in the opposite direction to the front four, for greater agility, and one for pointing them all at the same angle for the wonderfully disorienting crab mode. Its function, as far as I manage to fathom, is both to titillate my photographer and complete the loopiest parallel-park maneuver on Earth, given a long enough run-up.

Once our conversationally stunted training session is complete, it’s time to seek out some appropriately testing terrain to see just what the Shaman will do. Its factory is just a couple of hours from Moscow, so we’re in a region of Russia blessed with the odd stretch of tarmac, so a short stint on road is required to take us to something altogether more challenging.

The Shaman will indeed do roads--Vladimir tells me it was one of the first items on the development to-do list--but I’m sure he’d be the first to admit they are far from the vehicle's strongest talent. The sheer racket caused by its squishy off-road tires and meager soundproofing at such stratospheric speeds as 40kph drowns out any attempt to press him on the issue.

I approach a swamp, which Vladimir’s excited gesticulations indicate I should plunge right through. With the photographer and his camera on the other side, I aim to create the largest water splash I can. Well, wouldn’t you? 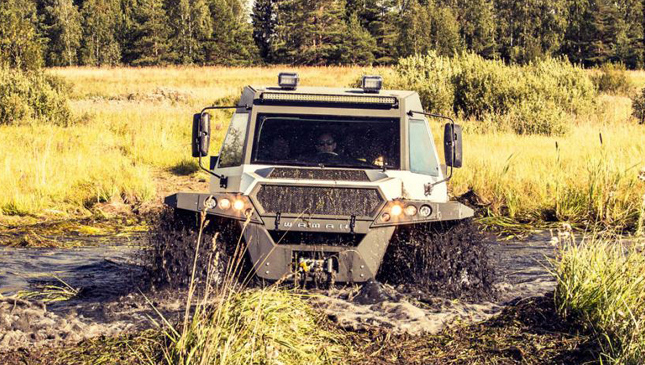 I dive into the manky brown water, distributing it far, wide and high, before slowly bobbling my way to the other side and ascending effortlessly back onto terra firma. Stumbling out of its side door, two things are immediately apparent: the truly rancid pong that’s permeating the air from the disturbed waters, and a whole family of fish flailing in vain, dragged out of the water in my wake. Guilt-ridden, I throw as many as I can back in, concluding I do not have the killer instinct to hunt animals that this Shaman’s future owner should have.

With the eight-wheel steer activated, the Shaman's agility is ludicrous. It’s made to help you cut and weave through tricky forest tracks. And it does.

And how about this? Flick the eight-wheel steering to its most agile, floor it in third on full lock and you’ll revel in the most unconventional donuts known to man. There are few more glorious feelings on wheels, though I’d advise exercising more calm if you have stricken adventurers or precious minerals on-board.

We’ve not even gotten to the Shaman’s ultimate party trick, and keen to show it off, Vladimir directs me to a river. The River Volga, to be precise. Europe’s longest.

"We’re going to cross the river," says interpreter Dmitri, in the deadpan way of someone literally relaying the words of another. I’m assured our near five-ton bulk will float, but I can only imagine how cheerfully those fishermen will chuckle if we fail.

Dmitri relays more straight-faced statements, namely: "We’ve never crossed this bit before," and "Can you swim?" As a pairing, they’re quite something. Vladimir is keen to take the reins, and I’m not about to stop him. And so with the Avtoros MD at the helm, we shuffle slowly toward the water’s edge, the boss pointing the nose of his company’s creation down toward the waterbed. 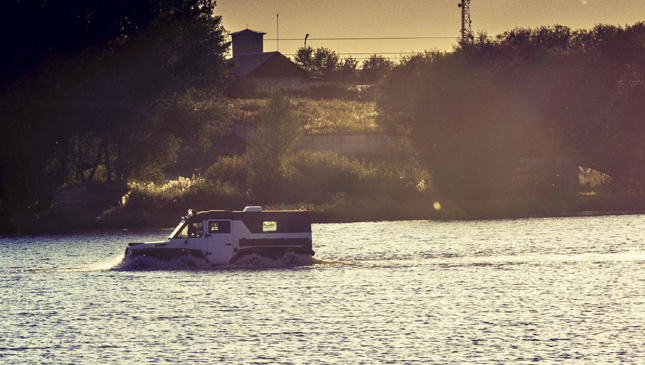 Once the rear is proud enough of the ground, the slightly ramshackle propeller is slung on the back and connected up, linking it to the Shaman’s controls. It looks for all the world like an under-endowed afterthought. Our descent continues, until the stomach-churning moment the wheels are separated from the ground and something the weight of two Discoverys must keep itself afloat.

That we didn’t make the headlines tells you it’s successful, though progress across the river can be gauged only by picking a reference point through the side window--I opt for a particularly disgruntled fisherman--and watching it gradually move from right to left.

Ten really rather serene minutes later, we emerge onto land like a hippo clambering ashore. The Shaman doesn’t dispatch rivers with quite the lunatic abandon it does hills, swamps and forests, but then it’s quite the boast that it even does so at all.

The ultimate adventure vehicle? Vladimir’s ambitious growth plans mean I’m inclined to say not for long. They include a pickup version of the Shaman, and an Avtoros take on the quad bike. The former will be able to hold a bison, so it will certainly accommodate the latter. Russia, it turns out, really doesn’t need roads. 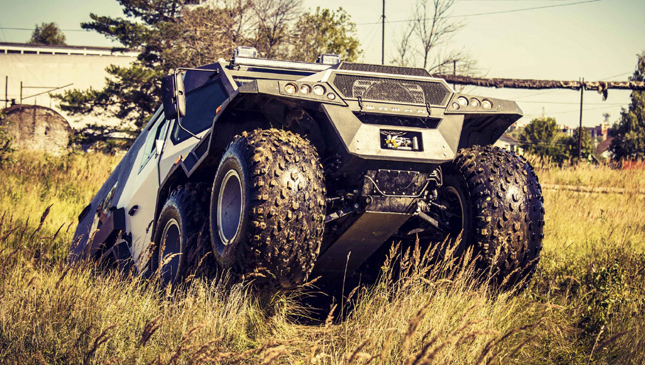 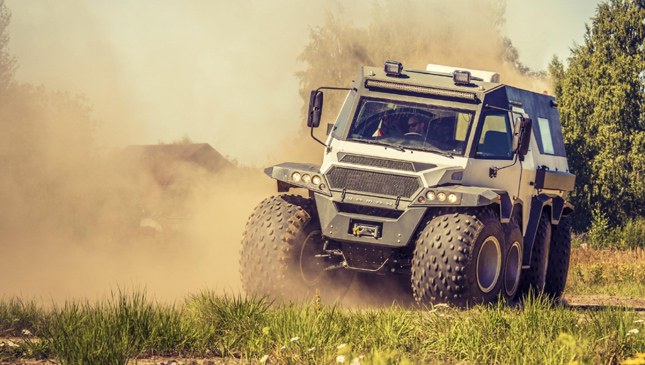 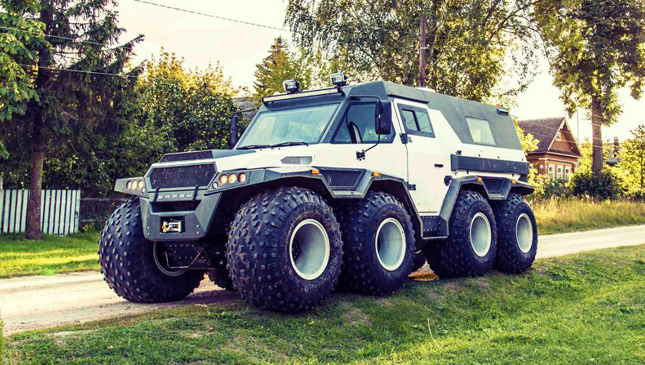 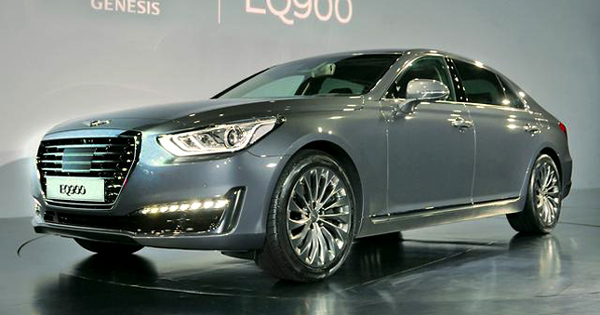 The Genesis G90 is the beginning of a new age for Korean automotive luxury
View other articles about:
Read the Story →
This article originally appeared on Topgear.com. Minor edits have been made by the TopGear.com.ph editors.
Share:
Retake this Poll
Quiz Results
Share:
Take this Quiz Again
TGP Rating:
/20