Can you beat Michele Bumgarner in an all-new Mazda 3 Skyactiv?

Then join this contest
Jun 12, 2014
CAR BRANDS IN THIS ARTICLE

When professional race driver Michele Bumgarner started writing a blog for this website in January this year, Top Gear Philippines editor-in-chief Vernon B. Sarne wondered just how good of a driver she really was, and if regular guys could actually beat her behind the wheel.

Vernon brought up his curiosity with Berjaya Auto Philippines president and CEO Steven Tan and got the ball rolling. (BAP is the official distributor of Mazda vehicles in the country.) The basic idea: Stage an event in which regular dudes can have a realistic shot at beating Michele in a head-to-head driving match.

And so an event was born: "HEAD TO HEAD - CAN YOU BEAT MICHELE BUMGARNER IN AN ALL-NEW MAZDA 3 SKYACTIV? (POWERED BY TOP GEAR PHILIPPINES)." This will be staged on June 21 (Saturday, from 8am onwards) at the SM Mall of Asia Block 12 parking area.

The challenge is simple: Beat Michele Bumgarner in a head-to-head driving contest and you get to travel to the United States on August 21-25, 2014, to watch her compete in a Road To Indy race at the Sonoma Raceway in California.

But first things first: Before you earn the chance to challenge Michele in a one-on-one driving match (think Race of Champions), you have to qualify for the competition first. And here's how you do that:

* First, you have to be at least 18 years old and a holder of a valid driver's license. You also need to have a valid passport that won't expire until February 28, 2015 (or six months after the US trip).

* You must have never been issued a professional racing license by Automobile Association Philippines. This means you must have never competed in any of the following motorsport events: karting, slalom, autocross, drifting, rally, drag racing, hill climb and circuit racing. This is to level the playing field for the other participants.

* You must not be an employee of either Summit Media (publisher of Top Gear Philippines) or Berjaya Auto Philippines.

* You need to go to the qualifier, which is essentially a virtual racing contest on PlayStation. The qualifying legs are on June 14 (Saturday) and 15 (Sunday), from 9am to 5pm, at Mazda Alabang, Mazda Greenhills and Mazda Pasig. Thirty (30) participants--those who submit the top 30 times at all three Mazda showrooms--will qualify for the main event on June 21. Needless to say, if you're attending the qualifier, you need to be absolutely sure that you will be available to compete on June 21.

We apologize for the last-minute announcement for the qualifier. We had to rush this event as we had to squeeze everything within Michele's free time before she gets busy with her racing activities in the second half of the year. Plus, we only secured the permit from the Department of Trade and Industry yesterday, June 11.

If you're too young to join or you don't have a driver's license yet, you can still go to the qualifier and join the second category of the event. If you're at least 10 years old, register and join the PlayStation contest for a chance to ride shotgun with Michele Bumgarner during the main event on June 21. The top 10 qualifiers in this category will be selected for this purpose.

As for the 30 qualified participants in the main category, they will go through a series of head-to-head matches on a specially designed track using identical Mazda 3 cars at the MOA grounds. The contest will follow a knockout format. Again, think Race of Champions, down to the identical (mirror) tracks. The last man (or woman) standing earns the right to challenge Michele Bumgarner in the final round, which will be a best-of-five battle. The first driver to chalk up three wins is declared the overall champion.

Note that Michele will be driving exactly the same-spec Mazda 3 car as her rival. She also won't enjoy an advantage when it comes to the track layout as it will be set up just in time for the event.

If anyone manages to beat Michele Bumgarner, he/she gets to travel to the US on August 21-25 to attend the Road To Indy race at the Sonoma Raceway in California (with pocket money, of course).

Now, even if you have no plans of competing, we still would like to invite you to attend the event on June 21 at SM Mall of Asia Block 12 parking area. Bring the whole gang. Bring the entire family. It will be a whole day of full-throttle activities, to be capped by a concert party in the evening. And the whole Top Gear Philippines staff will be there to hang out with you!

Challenge accepted? Then, see you at the two-day qualifier this weekend--June 14-15 (Saturday and Sunday, 9am to 5pm)--at Mazda Alabang, Mazda Greenhills and Mazda Pasig. 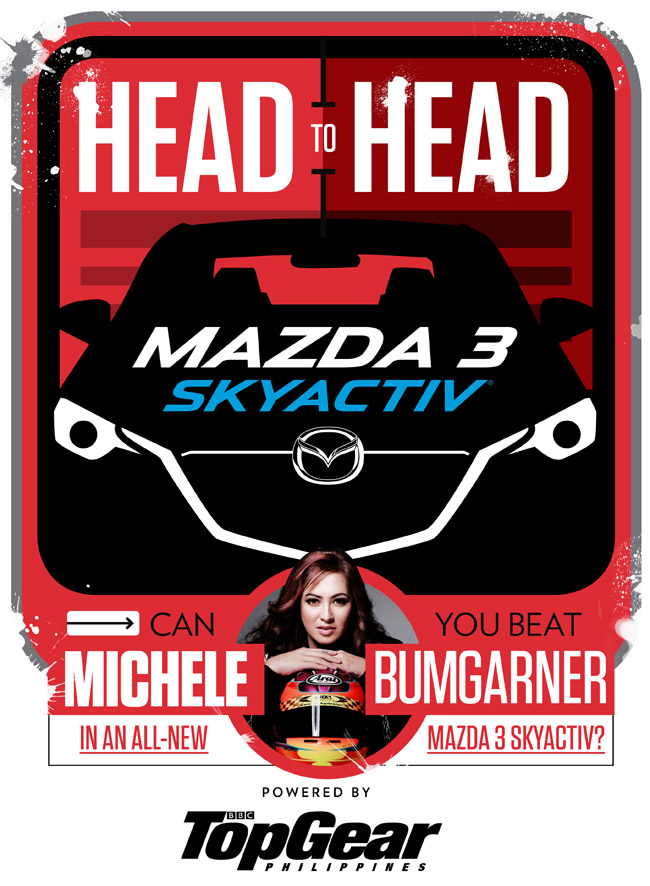 Nissan hints at its next chapter
View other articles about:
Read the Story →
This article originally appeared on Topgear.com. Minor edits have been made by the TopGear.com.ph editors.
Share:
Retake this Poll
Quiz Results
Share:
Take this Quiz Again
TGP Rating:
/20