This time with car clubs and bloggers
by Sharleen Banzon | Mar 3, 2014
CAR BRANDS IN THIS ARTICLE 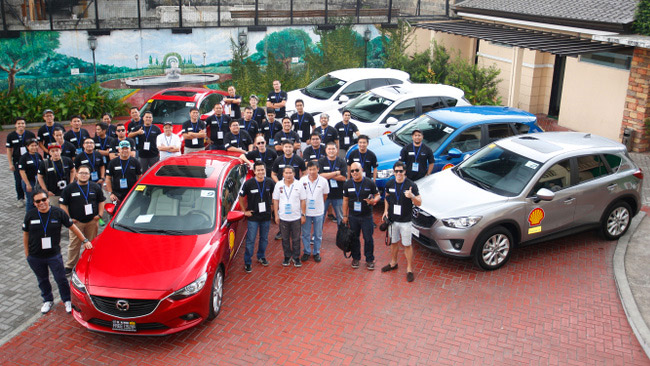 Berjaya Auto Philippines recently organized a second run of the "Mazda Skyactiv Experiment" fuel-economy run. The first staging of the event had been conducted with the local motoring media as the drivers. This time around, the exclusive distributor of Mazda vehicles in the country invited car clubs and automotive bloggers to take the helm of its Skyactiv models.

(Read: How efficient is Mazda's Skyactiv technology in the real world?)

Like the previous event, this one featured the CX-5 FWD Pro, the CX-5 AWD Sport, and the Mazda 6. Three units of each model were deployed, for a total of nine test cars running on Shell FuelSave gasoline. Each car carried three participants and a marshal, whose job was to ensure that real-world driving techniques were being used; excessive hypermiling tactics earned demerits. If you've read our report on the first staging, however, you know that when there are prizes at stake in eco runs, the motoring media tend to get creative. So creative, in fact, that even if some driving methods are crafty, questionable and dangerous, the organizers have no choice but to concede they are in keeping with the rules.

For Part 2, there were a couple of changes from the previous program: First, while the urban leg was also 30km long, it followed a different route to avoid an event in Manila. Second, the 60kph highway run was dropped, because even though the results from Part 1 had shown this to be the most efficient highway speed, the sentiment among the participants was that it wasn't really practical for real-world driving. Instead, the 75km circuit for the highway leg was run twice--first at 80kph, then at 100kph.

So, how do the results from both stagings stack up against each other? They're pretty close, as the second chart below shows--and the car clubs and automotive bloggers actually did marginally better, if only by a few tenths. "The similarities are startling--which means that you don't have to be an expert eco-warrior to yield amazing fuel-economy results with Mazda Skyactiv technology," said Steven Tan, CEO of Berjaya Auto Philippines.

We do have firsthand experience of Skyactiv's fuel-saving prowess, but we wanted to pry a bit more into the driving styles used by the second group of bloggers. We thus asked our very own Mikko David, who had plotted the test route, to give us an insider perspective. His response: "The car-club members and the bloggers represented the extremes of driving skill and motoring habits. On one end, you have very passionate car nuts who knew how to get the most out of their cars. On the other end, you have very impressionable consumers who were just as curious to see what the Skyactiv technology could do, in order to share their findings with their online audience. This made the results even more believable, because this time, a wider driving spectrum yielded the fuel-consumption figures in real-world conditions."

Does that mean the media are less dependable when it comes to eco-run results? "Well," Mikko replied, "they’re more hell-bent on winning."

We take that to mean "more extreme in eco-driving." But if this second group of participants really were much more relaxed and much less competitive behind the wheel, then the similarity of the results seems to indicate that the media's rule-bending was for naught. While some of us thought we were outsmarting the technology and the organizers, it appears we were the ones being outsmarted.