With 18,000 advance orders from customers worldwide
Jul 7, 2011
CAR BRANDS IN THIS ARTICLE 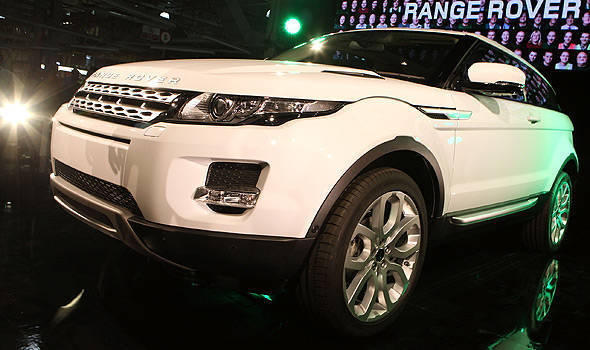 The very first production Range Rover Evoque was recently driven off the line at Land Rover's Halewood manufacturing plant in Liverpool, England. To mark the occasion, the vehicle will be donated to the British Motor Industry Heritage trust.

"The Evoque is an incredibly exciting vehicle that joins a product range, which across both of our brands is the strongest we have ever had--and it fits in perfectly," said Ralf Speth, chief executive of Jaguar Land Rover. "The teams that have designed, engineered and built the new Evoque, working together with our research and supplier partners, can be immensely proud of their achievement. Worldwide interest in our new car has been exceptional, with 18,000 orders received from customers eager to be among the first to own the new Range Rover."

Because of the huge demand for the Evoque, Jaguar Land Rover has doubled the workforce of the plant to more than 3,000 in order for the company to deliver the new model. According to the carmaker, 75 percent of the Evoque's production will be exported to more than 170 countries around the world, contributing approximately £2 billion (over P137 million) to the United Kingdom's economy. In addition, with 50 percent of the Evoque's components being sourced from more than 40 suppliers in England, the latest Range Rover model adds another £2 billion to the country's economy.

"It is a groundbreaking product, a Range Rover with concept-car looks, lightweight technologies and the capability to deliver 50mpg (roughly 21.26km/L) fuel economy. At the same time, it's still a true Range Rover that's agile, nimble, designed to survive in the urban jungle and capable of tackling the toughest climates and terrains, thanks to Land Rover’s legendary all-wheel drive expertise," added Speth.

How many Range Rover Evoques do you think will make it to the Philippines?

Another Ford Group Philippines executive moving to BMW
View other articles about:
Recommended Videos
Read the Story →
This article originally appeared on Topgear.com. Minor edits have been made by the TopGear.com.ph editors.
Share:
Retake this Poll
Quiz Results
Share:
Take this Quiz Again
TGP Rating:
/20