Lexus to launch CT200h in February

Is this the hybrid you've been waiting for?
Jan 30, 2011
CAR BRANDS IN THIS ARTICLE 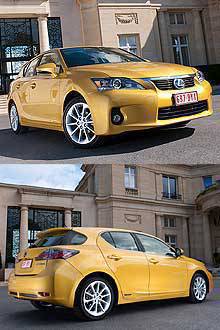 The Lexus CT200h's arrival in the Philippines is no longer a secret. You've read about it in the December issue where the Chief was enlightened about the reason behind having a luxury hatchback in the market.

What you probably didn't know is when it's actually coming. Well, you will now. No less than Lexus Manila president Daniel Isla revealed that the CT200h will be officially unveiled in the Philippines on February 21.

As a full-hybrid--it can operate on electric power alone or on gasoline alone, or both--with Toyota's eco-friendly technology, the Lexus CT200h will be priced between P2.3 million and P2.8 million. As chief editor Vernon B. Sarne said in "Sense, Sensibility, Luxury" (Top Gear Philippines, December 2010), one can push the CT200h to produce 99hp and 142Nm when running the car on gasoline. The hybrid hatch's motor can generate 82hp and 207Nm while the battery can push this up to 37hp.

"As a unified hybrid mated to a continuously variable transmission, the whole system yields a collective 136hp--certainly not bad for a compact hatchback weighing 1,370 kilos (about as heavy as the Prius)," the Chief said.

Since the year has practically just started, Isla said Lexus will most likely sell the CT200h to 40 discerning and environment-conscious motorists this year.

The CT200h is Lexus Manila's third hybrid offering in the Philippine market. Last year, the luxury brand under the Toyota Motor group introduced the LS600h and the RX450h.

Do you think it will be a hit?

Toyota Motor Philippines sees 2011 sales growth at 9%
View other articles about:
Read the Story →
This article originally appeared on Topgear.com. Minor edits have been made by the TopGear.com.ph editors.
Share:
Retake this Poll
Quiz Results
Share:
Take this Quiz Again
TGP Rating:
/20