This Mini is all grown up
by Patrick Everett Tadeo | Apr 4, 2011
CAR BRANDS IN THIS ARTICLE 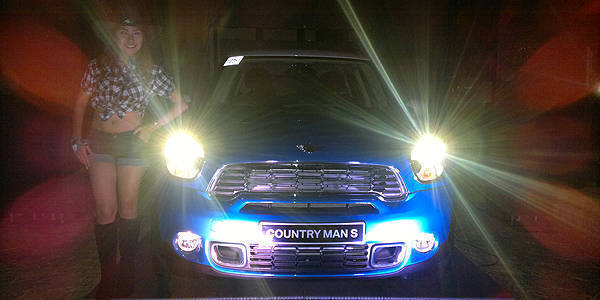 British United Automobiles, distributor of Mini vehicles in the Philippines, is looking to sell over 120 units of the Countryman this year.

This was revealed by British United Automobiles vice president Michael Cua at the launch of the Mini Countryman on April 1. Cua believes the company can even exceed its target if it had enough units to sell.

"But the demand for the Countryman around the world is so high, we will not have enough units to sell," Cua shared.

Three Countryman variants are available in the Philippines:

1.  The entry-level Mini Cooper Countryman with the 1.6-liter naturally aspirated inline-four engine that puts out 122hp and 160Nm of torque and has a price tag of P2.380 million;

2.  The mid-level two-wheel-drive Mini Cooper S Countryman, priced at P2.89 million, that packs a turbocharged version of the Mini’s 1.6-liter engine, boosting its output to 184hp and 240Nm of torque,  and;

3.  The range-topping Mini Cooper S Countryman ALL4 worth P3.15 million that has the same turbocharged engine but utilizes an all-wheel drivetrain.

Though Cua declined to give an exact figure, he did reveal that of the three variants, the mid-level two-wheel-drive Cooper S Countryman is the most popular in the nameplate's lineup.

Photos by Mikko David and Mini

MIAS 2011: 9 vehicles that will rev up your auto-show visit
View other articles about:
Recommended Videos
Read the Story →
This article originally appeared on Topgear.com. Minor edits have been made by the TopGear.com.ph editors.
Share:
Retake this Poll
Quiz Results
Share:
Take this Quiz Again
TGP Rating:
/20