Things between Angkas and the Land Transportation Franchising and Regulatory Board (LTFRB) are getting ugly. Really ugly.

In an open letter to the company and its public-affairs head George Royeca, the agency says Angkas is resorting to “emotional blackmail” and “underhanded tactics,” and goes as far as to accuse the firm of attempting to monopolize the country’s motorcycle ride-hailing industry.

“It is quite unfortunate that Angkas has made a public spectacle, and has resorted to emotional blackmail in its attempt to cement its foothold on this transport service,” the LTFRB says in a statement released on Facebook.

“It is one thing to make an assiduous representation to state your case and your points on the matter, but it is another thing to use the issue as a forum to protect your vested interest at the expense of the government, which has nothing but the overall public interest in mind.”

According to the LTFRB, Angkas’s claim that the agency’s move to limit the company to just 10,000 riders within Metro Manila isn’t ‘displacement,’ and that riders cut from the service will “have the option to choose the best employment/partnership terms either from you, or the two other participants in the program, JoyRide and Move It.” Like Angkas, these two new players are allowed to operate with 10,000 riders each in Metro Manila.

“Your argument that 17,000 out of your 27,000 riders will be deprived of their livelihood does not hold water, as they are the prospects of JoyRide and Move It. For Angkas to claim the 17,000 as their own is in itself curtailment and infringement of the right of the rider to seek the best employment opportunity,” the LTFRB says.

The agency also goes on to say Angkas’s attempt to monopolize the industry is “unacceptable,” and that the company’s participation in the agency’s pilot run “should not be construed as a right to impose or demand monopolistic provisions that will be detrimental to the program in the long run.”

It doesn’t stop there.

“Perhaps, it is also a fair assumption to state that Mr. Royeca, who remained silent in consultative meetings and sessions, and who expressed amenability to the entry of Joy Ride and Move it, as well the cap provided, is really more concerned with losing at least P170,000 per day (pegged at a very conservative one ride per day only) in potential income if the 17,000 riders will move out of Angkas (based on 27,000 x P50/ride a day), which is why now he is drumming up the imagined suppression and unfair treatment of Angkas.

Yikes. You can read the LTFRB’s statement in full at the bottom of this story.

Like we said, ugly. The worst part of all this is we’re all stuck waiting on both parties to sort out this mess. So, which side are you on? 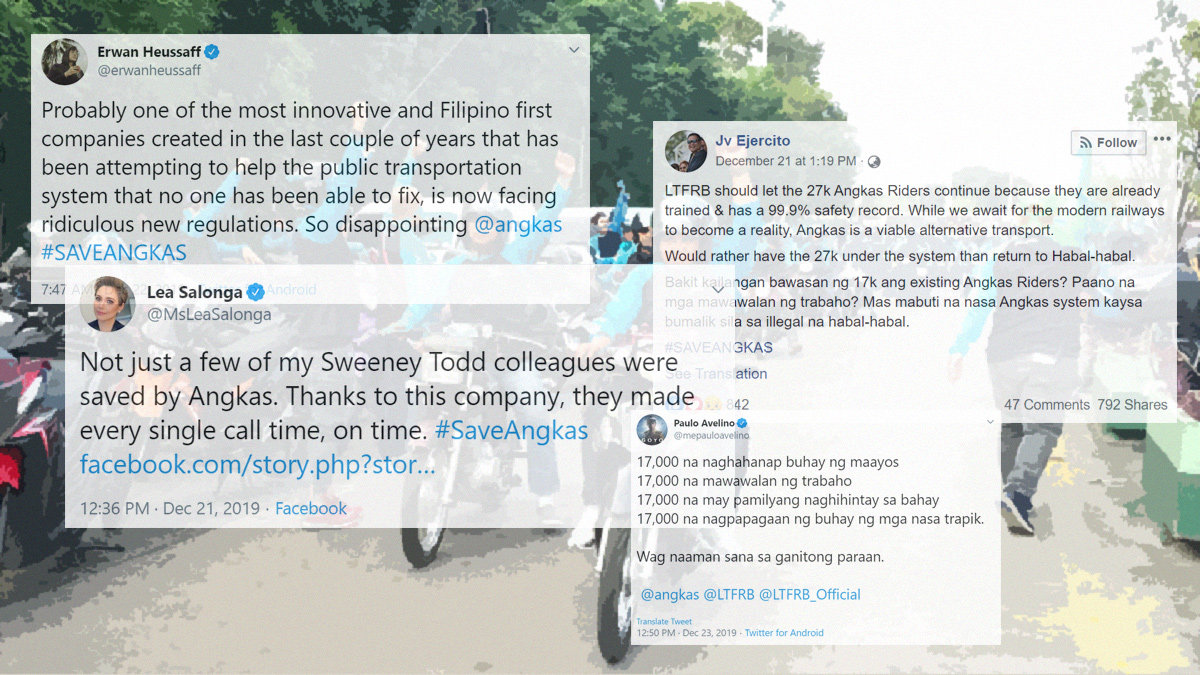 Look: Celebs express support for Angkas amid LTFRB’s rider limit
View other articles about:
Read the Story →
This article originally appeared on Topgear.com. Minor edits have been made by the TopGear.com.ph editors.
Share:
Retake this Poll
Quiz Results
Share:
Take this Quiz Again
TGP Rating:
/20