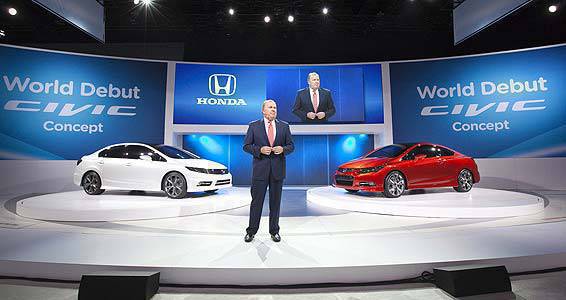 Honda has finally shown what the next-generation Civic coupe and sedan might look like as it unveiled the Civic Si Concept coupe and Civic Concept sedan at the North American International Auto Show.

The Civic Concept sedan exudes a sophisticated presence with its front grille defined by crisp lines and a solid bar that integrates a chrome Honda emblem. The looker, however, is the Civic Si Concept coupe with its more angular front fascia, mesh grille and a tapered rear roofline that flows smoothly into the trunk. Adding a sporting flavor to the Civic Si Concept coupe are the rear air diffuser, center-mounted exhaust outlet and a dual vent-equipped rear deck lid spoiler.

The ninth-generation Civic embraces the phrase a "Civic for all people," which was originally used in defining the goal of the first-generation Civic. For the 2012 Civic, this means a wider array of engine choices in its class, allowing the model lineup to "meet the needs of an increasing group of compact-vehicle buyers."

According to Honda, the future Civic model range will include a sedan and a coupe with conventional gasoline variants, two sporty "Si" performance versions, a hybrid and a natural gas alternative-fuel edition.

"The Civic is known for providing a balance of 'just-right' packaging, fun-to-drive character and outstanding fuel economy, at a price that even first-time buyers can afford," said John Mendel, executive vice president of sales for American Honda. "The redesigned Civic builds on this legacy and promises to be the best Civic yet."

NAIAS 2011: Porsche reveals 918 RSR
View other articles about:
Read the Story →
This article originally appeared on Topgear.com. Minor edits have been made by the TopGear.com.ph editors.
Share:
Retake this Poll
Quiz Results
Share:
Take this Quiz Again
TGP Rating:
/20