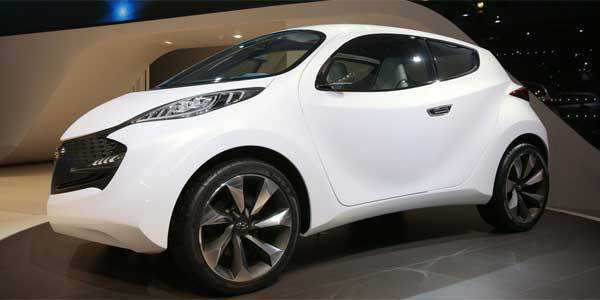 Hyundai  will be giving Filipino motorists a peek at its future when it displays the Hyundai ix-Metro hybrid electric crossover utility vehicle at the 3rd Philippine International Motor Show next week.

The ix-Metro, the concept car which was first unveiled at the 2009 Frankfurt Auto Show, will be the star of Hyundai Asia Resources’ booth at the PIMS along with the Korean brand’s updated lineup in the country.

The ix-Metro is equipped with a 1-liter engine that produces 123 horsepower and 156 Newton meters of torque. The engine comes with three cylinders designed to make the vehicle fuel-efficient while its Continuously Variable Valve Timing system has direct-injection capabilities paired with a turbocharger that boosts the ix-Metro’s power output. The car also has a built-in capacitor and a 12-volt battery.

As an environment-friendly hybrid vehicle, the ix-Metro's carbon dioxide emission is estimated to be only 80 grams per kilogram of exhaust while it consumes just 3.3 liters of fuel for every 100 kilometers--perfect to match the Philippine International Motor Show's theme of going green.

The ix-Metro’s futuristic thrust is also reflected in its exterior and interior design. It carries a triangular motif on the outside with its ice-blue LED headlights and fang-shaped foglamps. Inside, the ix-Metro's futuristic touches is seen its centralized cockpit that merges the center console, door panel, dashboard, and front seats into one structure; an organic electro-luminescence central display that provides active-time navigation and intelligentcontrol options while the vehicle is in motion; and a three-dimensional digital display board for its navigation system. Additional features include the ix-Metro’s ultra-thin digital side-view cameras, the ice-blue interior lighting, and the foldable rear seats and cargo area.

The ix-Metro is sharing the Hyundai’s booth with the Hyundai Sonata, Tucson, Santa Fe, Grand Starex Limousine, and the Genesis Coupe.

The 3rd PIMS will be held from August 19 to 22 at the World Trade Center in Pasay City. Read more about what to expect at the motor here:

Study cites most rewarding hybrid vehicle
View other articles about:
Recommended Videos
Read the Story →
This article originally appeared on Topgear.com. Minor edits have been made by the TopGear.com.ph editors.
Share:
Retake this Poll
Quiz Results
Share:
Take this Quiz Again
TGP Rating:
/20