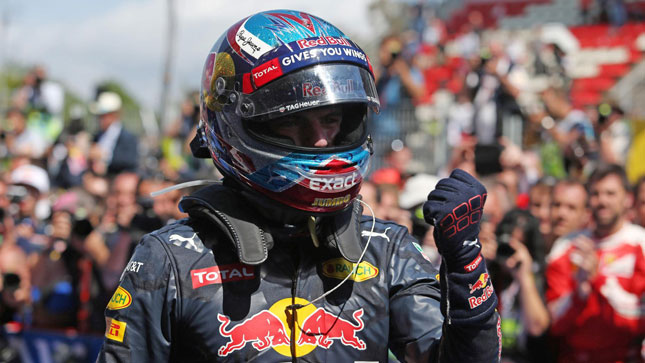 All the talk of this year's Formula 1 season becoming a bore came to a halt, as yesterday's race reminded everyone of how unpredictable a grand prix could be. Nico Rosberg's winning streak ended, and a surprise victor emerged. Here are the highlights from the Spanish Grand Prix.

1. Sensational Max Verstappen wins the race. You have not read that incorrectly. Max Verstappen--the 18-year-old driving Red Bull’s RB12 for the very first time--became the youngest race winner in F1 history after the Dutchman produced a faultless performance to claim the checkered flag in Barcelona. Verstappen, who had only been brought into the team less than two weeks prior and at the expense of Daniil Kvyat, had qualified in fourth place behind Daniel Ricciardo, but ahead of the two Ferraris on Saturday. Ricciardo looked best placed to take advantage of Mercedes’s disaster after assuming the lead on Lap 1, but Red Bull decided to cover Sebastian Vettel’s switch to a three-stop strategy early on in the race. That left Verstappen to fend off Kimi Raikkonen for the remainder of the grand prix on a two-stop race, a task the Dutchman performed impeccably to take the first F1 win of his career. Simply stunning.

2. The Flying Dutchman rewrote the record books. Besides becoming the youngest race winner in F1, Verstappen is also now the youngest driver to finish on the podium in a grand prix and the youngest ever to lead a race. At 18 years, 7 months and 16 days old, he has beaten Vettel’s old record of being the youngest driver to claim the checkered flag by almost three years. To top it all off, let’s not forget that the rookie had only passed his driving test eight months ago. And Verstappen achieved all of this in a car that he had never driven before Friday. Way to make us all feel like serial underachievers. 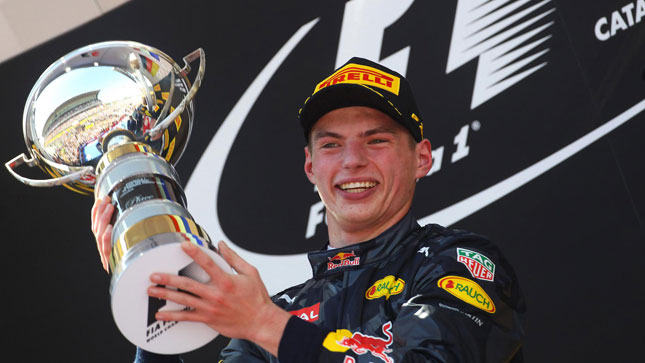 3. Mercedes made the worst possible start. While Verstappen drove exceptionally well, his win was only possible thanks to Lewis Hamilton's and Nico Rosberg’s crash on the opening lap. Rosberg had managed to jump Hamilton in the run down to the first corner at lights-out, but they came together as Hamilton attempted to regain the place under braking at Turn 4. The move proved fatal for both Mercs, as the world champion was forced onto the grass just as the championship leader was taking the inside line for the approaching corner. Losing traction, Hamilton spun and was helpless to prevent his car from sliding into his teammate, with both vehicles coming to a halt in the gravel. Who was to blame? In the immediate aftermath, Niki Lauda said Hamilton’s aggression had been “stupid," although some critics have said that Rosberg was at fault for moving across in the braking zone. The stewards have decided to take no further action. Would you have done the same? 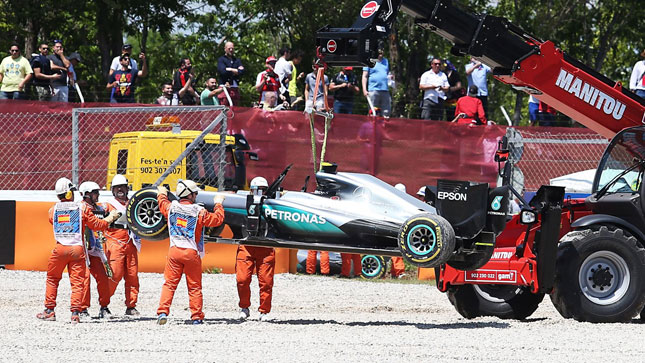 4. Daniel Ricciardo missed out on a podium finish. Ricciardo had looked the favorite to inherit victory after the accident between the two Mercedes drivers, and indeed the Aussie was leading comfortably after the first round of pit stops. However, Red Bull decided they needed to split strategies between their two cars to give themselves the best chance of winning as Vettel made the switch to the more aggressive four-stint approach. Recognizing the German as the biggest threat to victory, Red Bull did the same with Ricciardo, but it was the two-stop strategy of Verstappen and Raikkonen that prevailed at Circuit de Catalunya. Ricciardo came close to snatching third after a bold move on his old teammate down into Turn 1, but he failed to make it stick and a late puncture consigned him to fourth. Understandably, the smile that normally adorns his face was nowhere to be seen as his new teammate took his place on the top step of the podium. 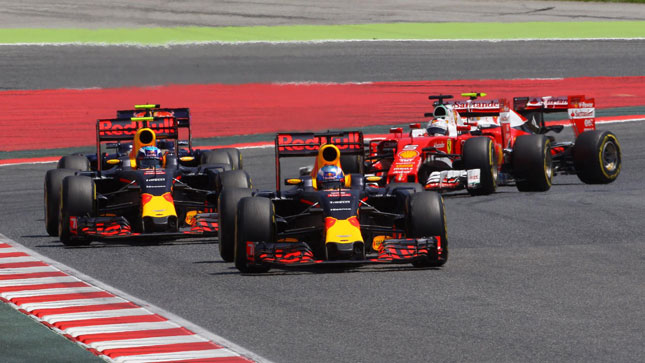 5. Ferrari is having a tough time. Yes, it may have taken two of the podium positions in Spain, but if anything the race highlighted just how much Ferrari is struggling at the moment. Almost every event this year has been preceded by talk of it "being closer" to Mercedes, but its German rivals always seem to have pace in hand when it comes to qualifying and the race itself. A further worry will be Red Bull’s resurgence in recent weeks, especially considering that its victory this weekend comes before a planned engine upgrade that is set to give it a significant performance boost for the Canadian GP next month. Sergio Marchionne expected Ferrari to start winning this weekend. If the team doesn’t get its act together soon, there may be consequences. 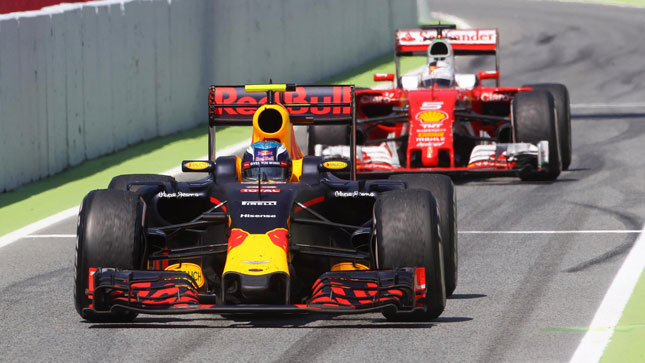 6. Daniil Kyvat had a mixed race for Toro Rosso. While the man who replaced him at Red Bull was fighting for victory at the head of the race, Kvyat was having a less enjoyable afternoon in his first grand prix back at Toro Rosso. His new teammate Carlos Sainz found himself as high as third after the incident on the opening lap, and registered a career-best finish of sixth come the checkered flag. The young Russian, however, had a low-key afternoon, squeezing into the points in 10th following an early order from race control to hand places back after overtaking under yellow flags. "You can’t be serious?" sighed Kvyat, who would later have to endure the ignominy of watching his Red Bull replacement winning the race outright. 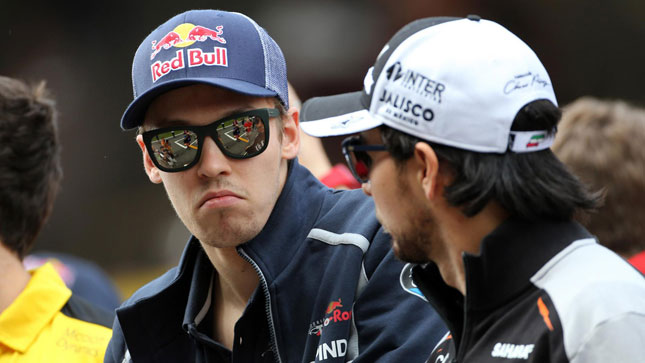 7. Williams recovered some points. After Valtteri Bottas and Felipe Massa qualified in P7 and P18, respectively, you would have been forgiven for thinking that Williams’s run of double points finishes was about to come to an end. However, the pace of the FW38 was good enough to haul Massa back into the top 10, while Bottas drove steadily to secure fifth less than two seconds down on Ricciardo after the Aussie had battled back from a late puncture. Williams is now the only team to have harvested points from both cars in each of the five races so far in 2016, with Bottas’s fourth place in Russia its best effort to date. Don’t expect its form to last, though: The next race is in the tight, twisty streets of Monaco, where Williams doesn’t normally fare so well. Still, if a teenager can win a grand prix... 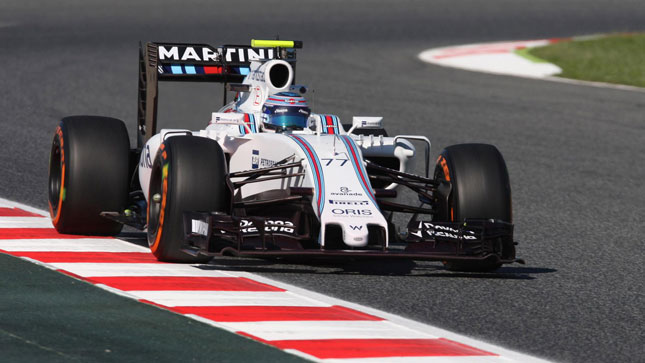 8. Nico Hulkenberg caught fire. Well, his car did. On Lap 22, the German driver reported over the team radio that there was smoke coming out of his engine, and the team instructed him to pull over next to a fire marshal and retire from the race. Hulkenberg duly did so, making it two DNFs in a row following his early exit from the Russian GP a fortnight ago. Disappointingly, the Force India driver has scored points just once this season. Oddly, there was more drama to come after Hulkenberg had stepped out of his car. The marshal made a mess of putting out the fire, prompting the 28-year-old to grab the extinguisher and bring the blaze under control himself. 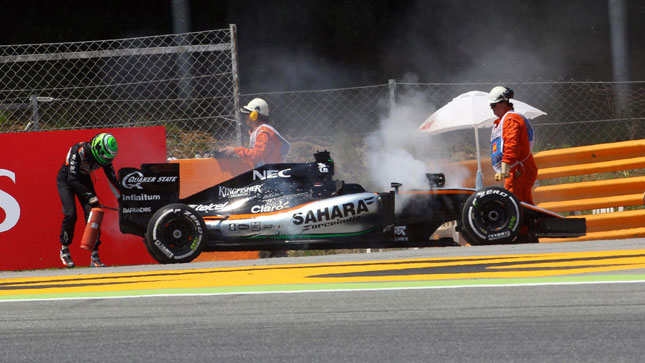 9. Fernando Alonso retired again. While Carlos Sainz’s P6 finish for Toro Rosso gave the home fans something to cheer about, Alonso’s retirement due to a mechanical failure put a damper on the mood of the Spanish supporters. The two-time world champion lost power on Lap 47 and was forced to park his car on the grass on the inside of Turn 3. Much like Hulkenberg, Alonso was then directly involved in the recovery of his vehicle. The 34-year-old hung around to help the marshals wheel the MP4-31 off the track rather than jump on the nearest moped for a lift back to the garages. What a gentleman. Either that or he wanted to make sure no one scratched his wheels. 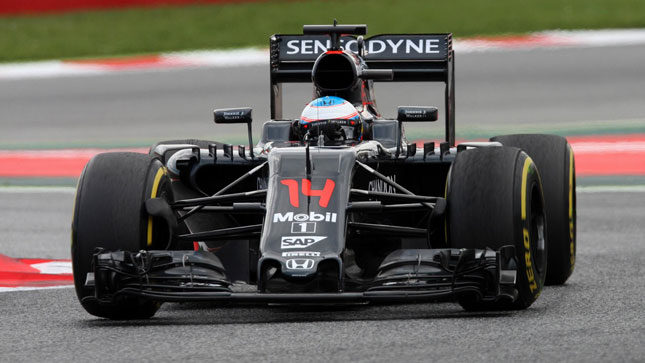 10. The standings haven't actually changed much. Although Mercedes’s double DNF certainly wasn’t ideal, it will take a certain amount of solace from the fact that it still leads the constructors' championship by 48 points ahead of Ferrari. Meanwhile, Rosberg didn’t lose any ground to his teammate in the battle for the drivers' title by account of Hamilton exiting the race as well. In fact, his cushion over the second-placed driver has only been cut by four points with Raikkonen’s podium finish allowing him to displace Hamilton in the championship. The top five drivers are as follows: Rosberg (100 points), Raikkonen (61), Hamilton (57), Vettel (48) and Ricciardo (48). Verstappen sits just behind that pack in sixth, combining the 25 points he earned for winning in Spain with the 13 he had accumulated in the first four races with Toro Rosso. Five races down, 16 to go. Who fancies a six-way fight for the title? 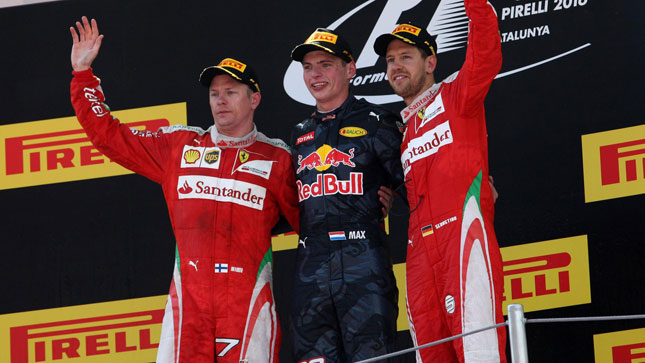 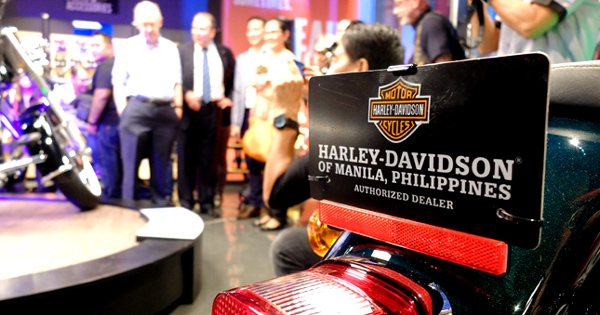