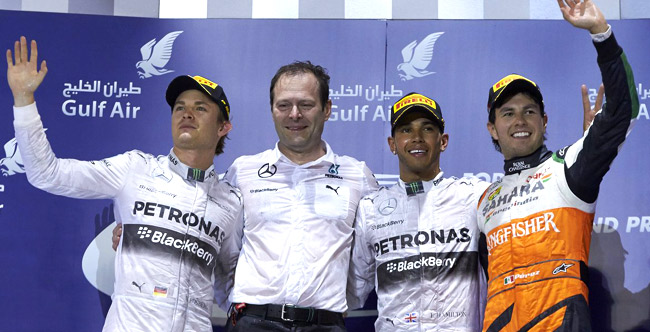 With just one week apart between the Malaysia and Bahrain Grands Prix, the rest of the field still ate the Silver Arrows' dust at the latter race last Sunday. While this year's hottest ticket is the showdown between Mercedes drivers Lewis Hamilton and Nico Rosberg, this third round of the championship proved to be an interesting duel with any driver's biggest yardstick: his teammate.

It was definitely a good day (or night), not just for Merc fans but all fans of the sport...

We haven't had a race this good for quite some time. Mercedes has given its drivers such a good car in the W05, it's going to get a bit hairy. Sure, these two have been racing since they were kids and they'll be genuinely happy for each other. But both know they have a real crack at the championship, and none of them like crossing the line second. This is a scrap we're going to enjoy.

...but definitely a bad day for fans of teams without that three-pointed star on their power unit.

First in line? Ferrari. They were the weekend's biggest losers. With the Sakhir International Circuit regarded as a power track, they had nothing to show. They're clearly lacking in pace and have a lot of work to do.

It was a good day for Rosberg...

He avoided the embarrassment of losing out three times in a row in qualifying to Hamilton and started from pole. While he lost the lead at the start, he constantly chased down his teammate, looking marginally quicker and showing that it was game on.

...and a much better day for Hamilton.

He stole Rosberg's race. His defensive move on Turn 1 at the end of the first stint was surely the decider, giving him pit-stop priority. Hats off to Lewis for managing the race and crossing the line just one second ahead of his teammate. He had to work for this one, and it's his first back-to-back victory since Turkey-Canada 2010. F1's boring, you say? Don't tell that to Niki Lauda.

It was a day to remember for Force India...

Especially for Sergio Perez, who had been outshone by the highly rated Nico Hulkenberg. Up for grabs? A podium spot. The Mexican capitalized on his chances and took the team's first podium in five years in only his third race with Force India. This will boost the Mexican's confidence, whose driving has been questioned the past year. Mixed emotions for Hulkenberg, who missed the opportunity of bagging his first podium. Another solid drive though, from 11th to fifth.

...and a day to forget for McLaren.

Kevin Magnussen and Jenson Button both retired due to clutch problems. Force India's good haul of points sees them slip down the constructor standings.

It was a bright day for Daniel Ricciardo...

The Aussie outpaced his teammate and drove a convincing race from 13th to fourth. That's a clear message to Seb. It's equally bright for Vettel haters, who took pleasure in this team radio call: "Sebastian, Daniel is quicker than you." For them, it's simply priceless.

...but a day to ponder for Sebastian Vettel.

It looks like he's going to be kept honest by his new teammate. Ricciardo has nothing to lose and everything to gain.

It was a tranquil day for safety car driver Bernd Maylander...

Until Pastor Maldonado drove into Esteban Gutierrez after coming out of the pits and flipped him. Yes, folks, he's still rough on the edges. It's disappointing he hasn't wrapped his head around better driving and continues to be a driver you want to avoid. Pastor, you should get a dumbass award for not knowing what "racing line" is.

...and a busy day for the penalty dispensers.

Maldonado was handed a 10-second stop-go penalty, a five-place grid penalty for the Chinese Grand Prix, and three penalty points for the incident. We're not at all surprised the Venezuelan is the first driver to collect the most penalty points thus far.

US insurance agency conducts small overlap front-crash test on SUVs
View other articles about:
Read the Story →
This article originally appeared on Topgear.com. Minor edits have been made by the TopGear.com.ph editors.
Share:
Retake this Poll
Quiz Results
Share:
Take this Quiz Again
TGP Rating:
/20