A look at some of the contrasting results
by Sharleen Banzon | Jul 29, 2014 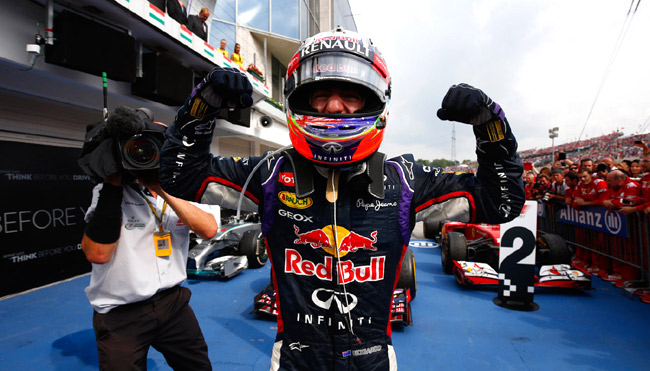 What a race to cap the first half of the season! It didn't even matter that the predicted rain arrived less than an hour before the race--it meant a grid start on intermediate tires, followed by a guessing game as to whether slick or grooved rubber was the right choice come the first pit stop. There were game-changing safety cars, brave overtakes, a little stunt show on the main straight halfway through, and changes in running order with under five laps to go. That's enough excitement to last us till the Belgian Grand Prix, four weeks from now.

The Budapest race was big on intra-team split strategies. Let's take a look at some of the contrasting results.

The Brazilian Felipe Massa gets a decent P5, one place higher than his starting position. He was one of the drivers who pitted under both safety-car periods (Laps 8 and 23), putting on option tires for the first stop and primary tires for the second. He then came in on Lap 45 for another set of primes, and managed to defend his position from Kimi Raikkonen during the final stint.

...while Bottas loses out during the first safety-car period.

Valterri Bottas, meanwhile, was P2 when Marcus Ericsson crashed out. The top four (Nico Rosberg, Bottas, Sebastian Vettel and Fernando Alonso) just missed the pit entry when the safety car was deployed; they had to go around one more time before swapping out their intermediates for options. But even though the Finn also pitted when the second safety car came out, he spent a good deal of time stuck in traffic--in the slower prime tires, to boot. He missed out on taking P7 by 0.380sec.

Fernando Alonso makes an inferior car and strategy work, doesn't he? Out of those who didn't get a free stop during the first safety-car period, Fernando was the only one who made it to the podium. What saved his race was when he managed to make up positions during the restart over Vettel, Jean-Eric Vergne and Rosberg. He and the team gambled on a long final stint, as opposed to coming in again and doing a late charge on fresh rubber. It nearly worked.

...and Raikkonen gets into the points.

P6 was a decent recovery after getting booted out in Q1 the previous day. Crucially, Kimi Raikkonen emerged from his final pit stop just ahead of Vettel, and maintained position despite a short but lively scuffle. His succeeding attempts to take P5 from Massa were unsuccessful--even on faster rubber, he couldn't catch the Merc-powered Williams on the straights.

There was a case of winner's luck here, but that's not to say it wasn't a winning drive that sealed Daniel Ricciardo's second win. He nipped into the pits just in time when the safety car made its first appearance, and led the race upon restart despite a brief change of positions with Jenson Button--who had also pitted, albeit for another set of intermediates. When the Australian pitted once again during the safety car's second tour, it was clear he needed to deliver an attacking drive to make his strategy work. And that's exactly what he did.

...while Vettel slides back from P2.

Two things undid Sebastian Vettel's race. The first was the safety car, and that was not his fault (he also had a non-discharging ERS battery immediately after the restart, which supposedly caused him to lose a position to Alonso; maybe it did, or maybe the Spaniard was simply braver on the braking zone to Turn 1). But the second factor to the German's slump to P7 was his self-inflicted spin halfway through the race. The car and the pit wall were somehow unscathed after the close encounter; the RB10's tires, however, weren't as lucky. Seb had to pit immediately to dispose of the flat-spotted rubber. It put him out of touch with Hamilton and Ricciardo, the podium finishers he'd been racing against prior to his mishap.

Hamilton says no to team orders...

Team orders will always divide the F1 viewership--depending on the situation, the title implications, and the driver they support. In this case, the use of team orders shows the perils of running intra-team split strategies that put two title-contending teammates close to each other on the track (actually, it's perilous even if the teammates aren't both contending for the title--just ask Vettel and his old pal Mark Webber).

Both Merc drivers had stayed out during the safety-car period, but while Nico was put on a two-stopper afterward (Laps 32 and 53, for option tires), Lewis Hamilton was made to stop on Lap 39 for a long final stint on primary tires. The radio calls from the pit wall came when Nico closed up to Lewis's gearbox around Lap 46. In fairness to the Brit, he did tell the team he would let the other Merc through if it came close enough, but the German couldn't satisfy this prerequisite until his final stop. By the time the eventual third-placer was tussling for the lead with five laps to go, it was clear that if Lewis had yielded to his teammate, he would've very likely not finished on the podium.

...and Rosberg denies asking for them in the first place.

Nico Rosberg was right behind Lewis again on the penultimate lap, and later went on to say "that's what's most annoying for me now because I had the chance and I wasn't able to use it, but of course it was very difficult. That was a pity." He refused to comment on the team-orders issue, adding that "I didn't want it--it was the team that informed me that he was going to let me pass." It must've been an interesting post-race debrief for Mercedes.

India's Mahindra coming to PH; Bolero, Xylo are initial offerings
View other articles about:
Read the Story →
This article originally appeared on Topgear.com. Minor edits have been made by the TopGear.com.ph editors.
Share:
Retake this Poll
Quiz Results
Share:
Take this Quiz Again
TGP Rating:
/20