A first-timer’s race debrief
by Ian Magbanua | Jul 23, 2021
CAR MODELS IN THIS ARTICLE

Like the rest of the Top Gear PH team, I’m an avid car enthusiast. This pandemic, however, has kept me away from my four-wheeled muses.

It was a real blessing, then, when I was asked to represent the team at the Media Autocross Challenge during the first round of the 2021 Toyota Gazoo Racing Vios Cup. I said yes, of course! Finally, I get to experience the smell of burnt rubber and gasoline again!

I’ll be the first to admit I’ve never run an autocross course before, and the whole idea that I was reppin’ my crew in a competitive setting just made it all the more anxiety-inducing (in the best way possible). An autocross race is a short and timed course run on a wide-open space, with pylons acting as gates to control the flow and direction of the runs. Only one car is allowed on the track during a timed run. Hit and topple a pylon and you get 2sec added to your time for each one; if it stays upright, there’s no time penalty. The competitor with the fastest and cleanest run wins the race. 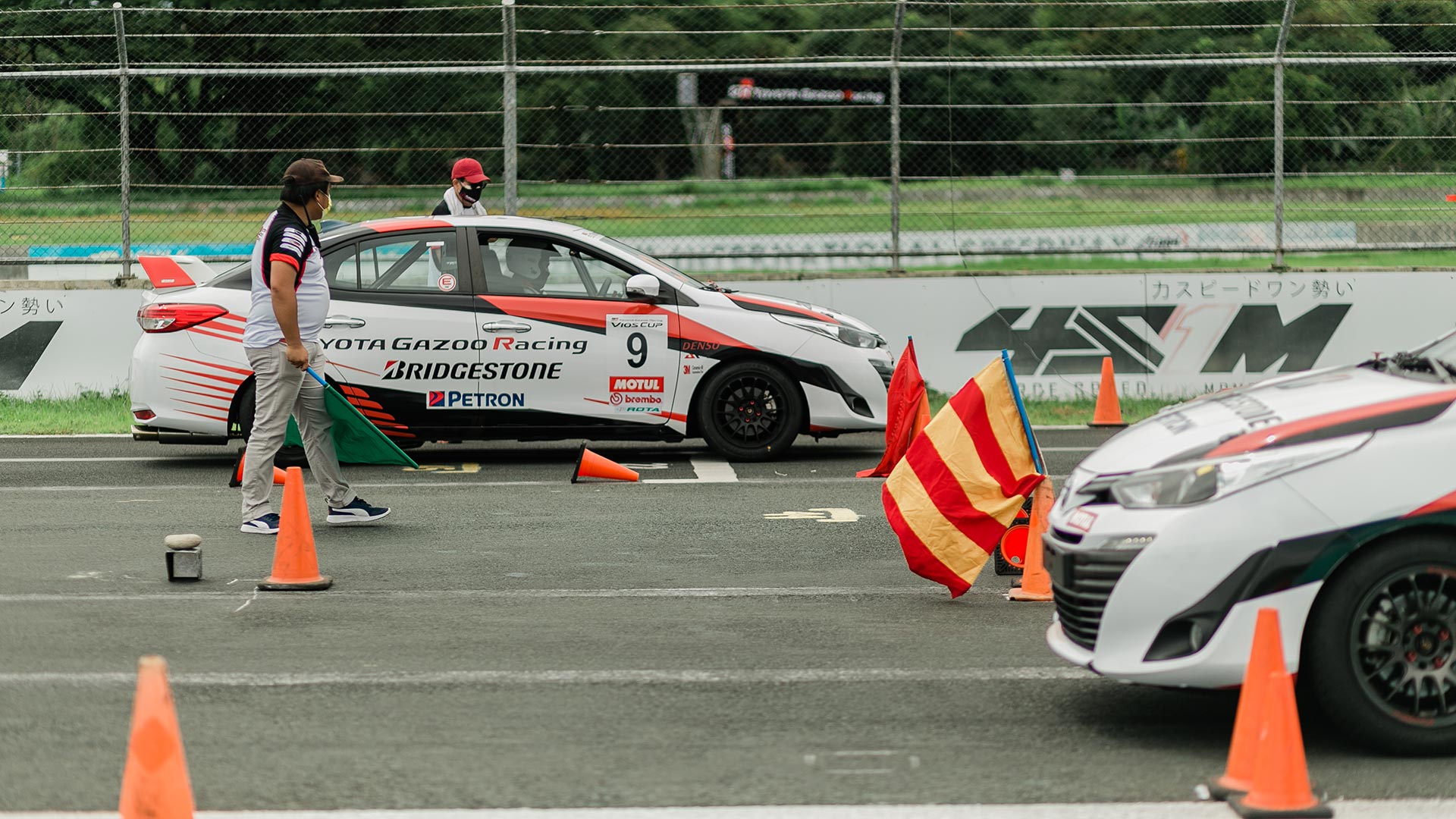 A few days before race weekend, Tuason Racing School, the official event organizer for the Vios Cup since its first season, invited all the participants for a driver’s safety briefing over Zoom. They laid out the course for us to study and told us that this year, we’d be driving CVT-equipped Vios Cup cars. (CVT for an autocross race?! Whut?! I’ll get to that later).

So, with the track layout memorized, I fired up Assetto Corsa on my PC for some practice. I used a 1km dragstrip map and some of the track markers as a substitute course—without pylons, of course—just so I could get used to some throttle control using an Abarth 500 set to automatic. All this was for naught, though, as the track layout had been changed by the time I arrived at Clark International Speedway for the event.

The reason for the track change—and the choice of a CVT-equipped race car, apparently—was the Influencer/Celebrity Autocross class. Some of these much younger competitors have zero experience with a manual transmission, and many of them are first-timers in an actual race environment. The changes ensured that everyone would still have a grand time racing that day. 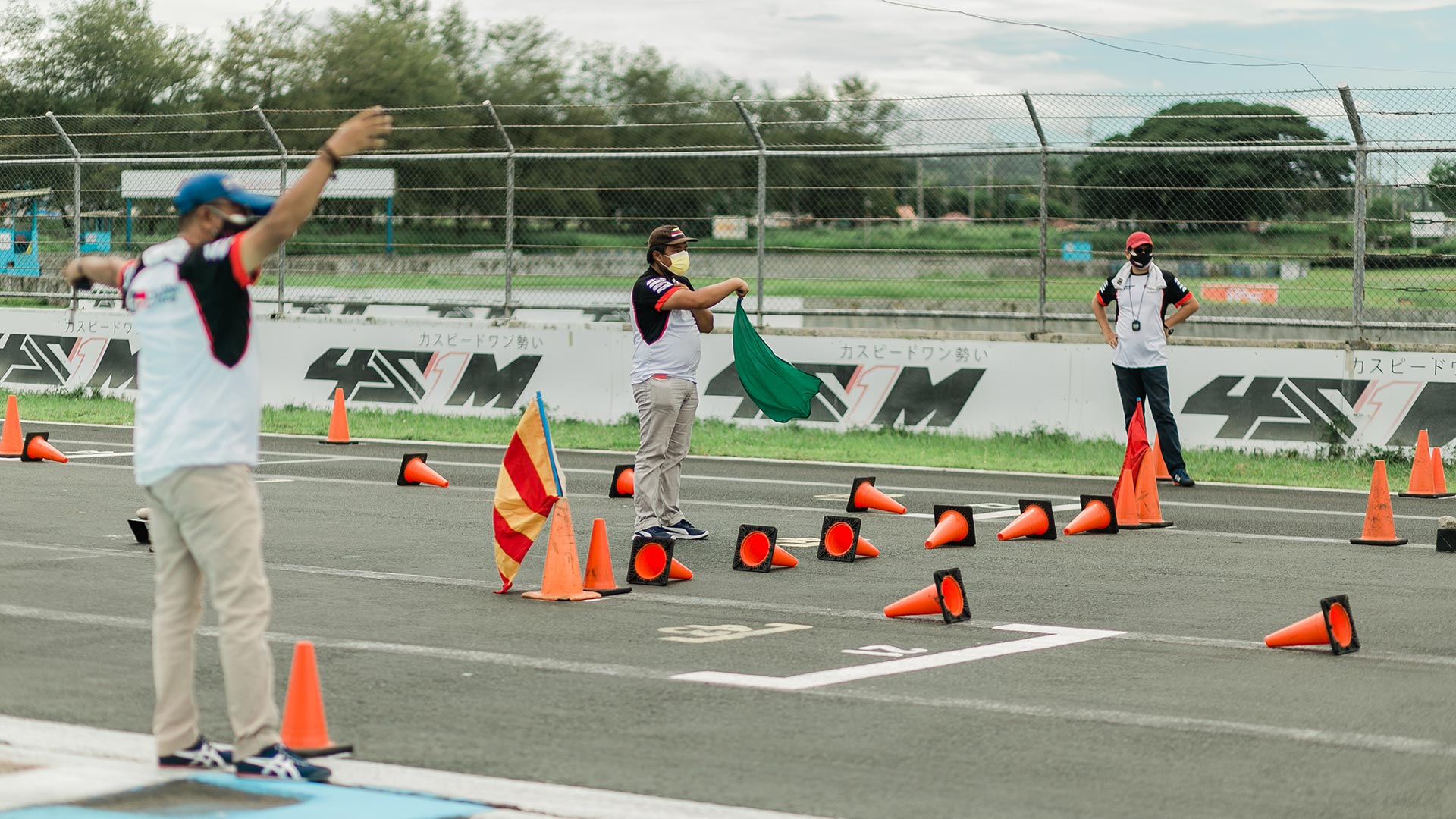 There were two autocross practice sessions set up for Friday, with the first round of the Vios Cup Circuit Race in between. Lacking autocross experience and being unfamiliar with the Vios Cup Car, I made the most of the Friday practice sessions. With the marshals doing manual timing, I was hitting low-37sec course times. On Saturday morning, we were offered a one-hour open practice session, and I was able to drop my times to a couple of high-36sec runs.

Race day was very nerve-wracking. Qualifying sessions especially, as only eight out of 12 drivers would move on to the semifinals, with only two runs each (the fastest of which would be the final qualifying time). I felt my heart drop when the race director started calling the eighth placer with low-36sec times. Turns out the organizers had already switched to the automated digital track timers, and those had cut everyone’s times by at least 2sec. I was really happy when I heard my name called out as fourth in qualifying.

The semifinals round would take just the top four drivers and advance them to the final round. That meant I had to up my game to keep from being bumped off my fourth spot. The semis were a blur, but now that I was more used to the track and the car, I was focusing more on cleaning up my lines. Thankfully, my runs were good enough to push me to the finals in third spot.

The final round was a knockout round for the remaining four drivers, meaning if I was faster than the fourth guy, I was assured of third place. But as luck would have it, I was able to bump off the second-place guy with my first finals run. This meant that if I could drive faster than the number-one guy, I could take first place—but as it stood, I was assured of a second-place win. Admittedly, the pressure got to me and I was only able to keep my second spot. Still, that’s a ton to be thankful for considering this was my first autocross outing. 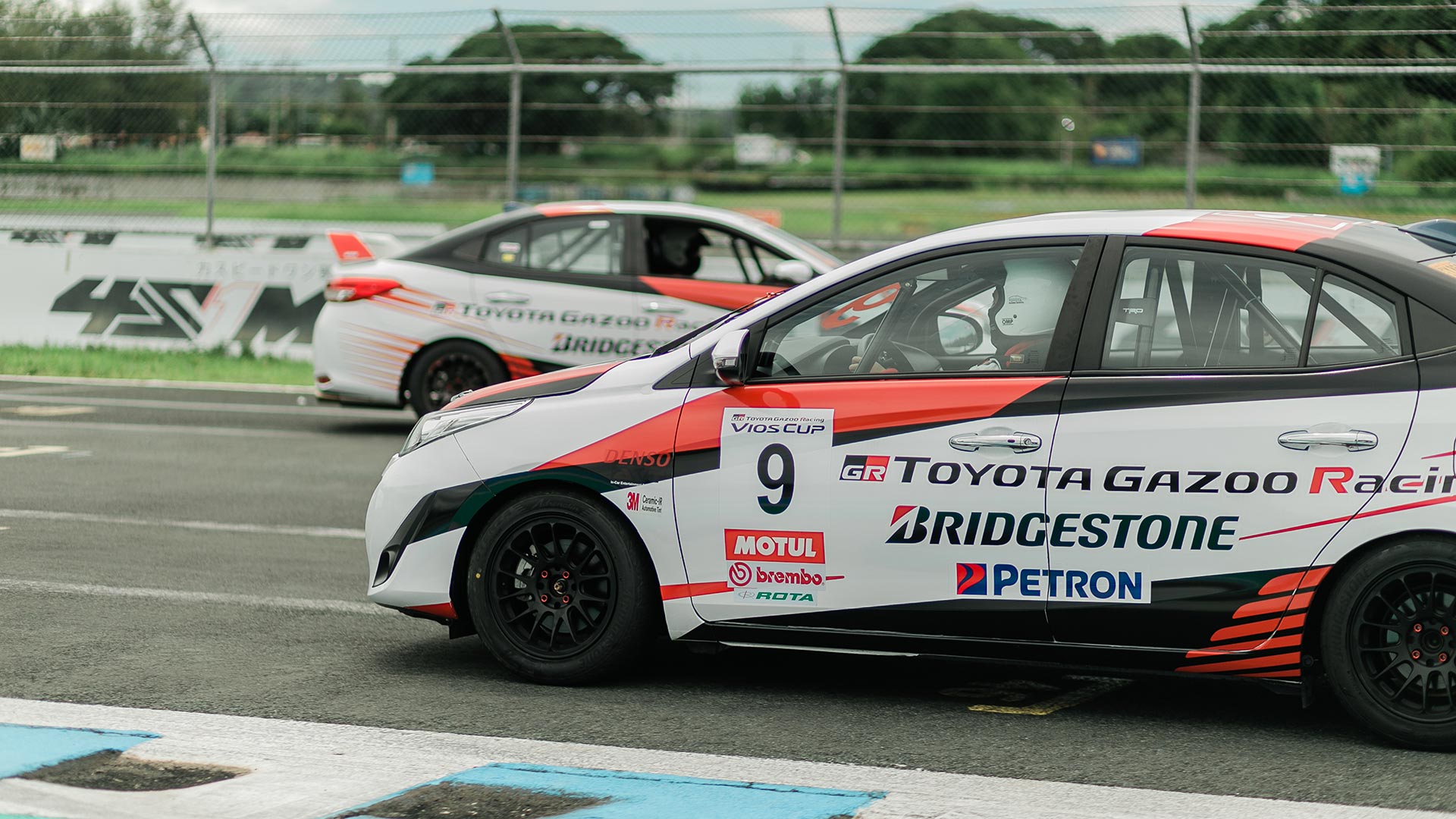 What did I pick up from this experience? Control equals speed and safety. The point of the exercise, really, is how to best control a car to maximize speed and handling while keeping well within the boundaries of safety. Every pylon on the track might as well have been a real-world obstacle—a pedestrian, a road sign, the car in front suddenly stopping, a low-hanging branch, even the bumper of a truck. Speed comes with precision, and precision comes with control. On the roads of Manila, that’s what it all boils down to.

I also learned that second to control, focus is also of utmost importance. This is magnified in an autocross race where you only get 30-something seconds to do your thing. The milliseconds I let my mind wander, thinking about my podium spot instead of focusing on car control, ironically ended up costing me that first place. 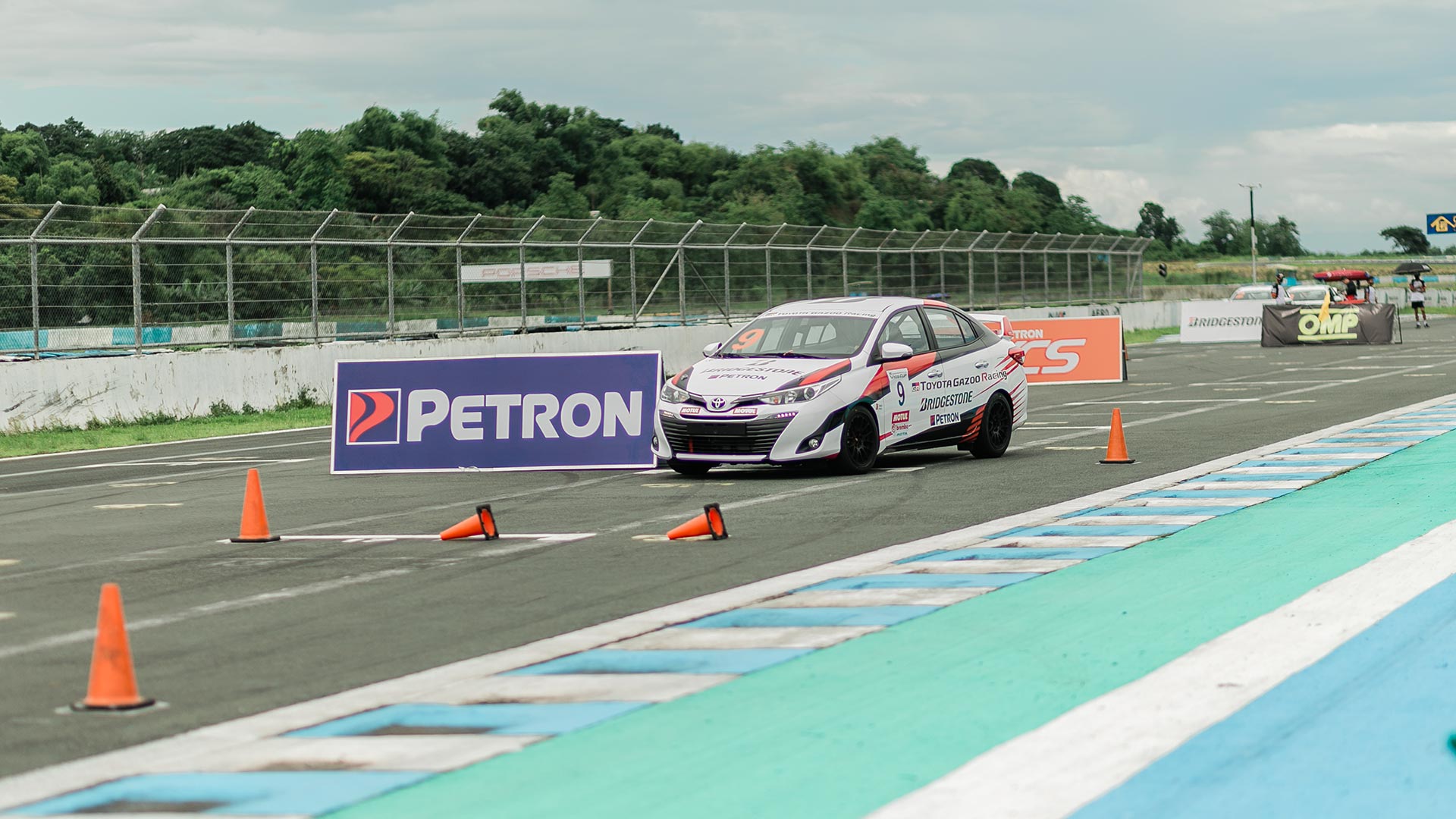 At the end of the day, I came out with a better appreciation of what I, as a normal, everyday driver in Metro Manila, was capable of. It wasn’t about lap times or the second-place spot. It was knowing that my brain and body could handle the reaction times required of me when needed.

There is, of course, so much more room to improve. And I’m taking every little lesson with me to make my driving that much better—for the daily grind, and also for the second leg of the Media Autocross Challenge in September. 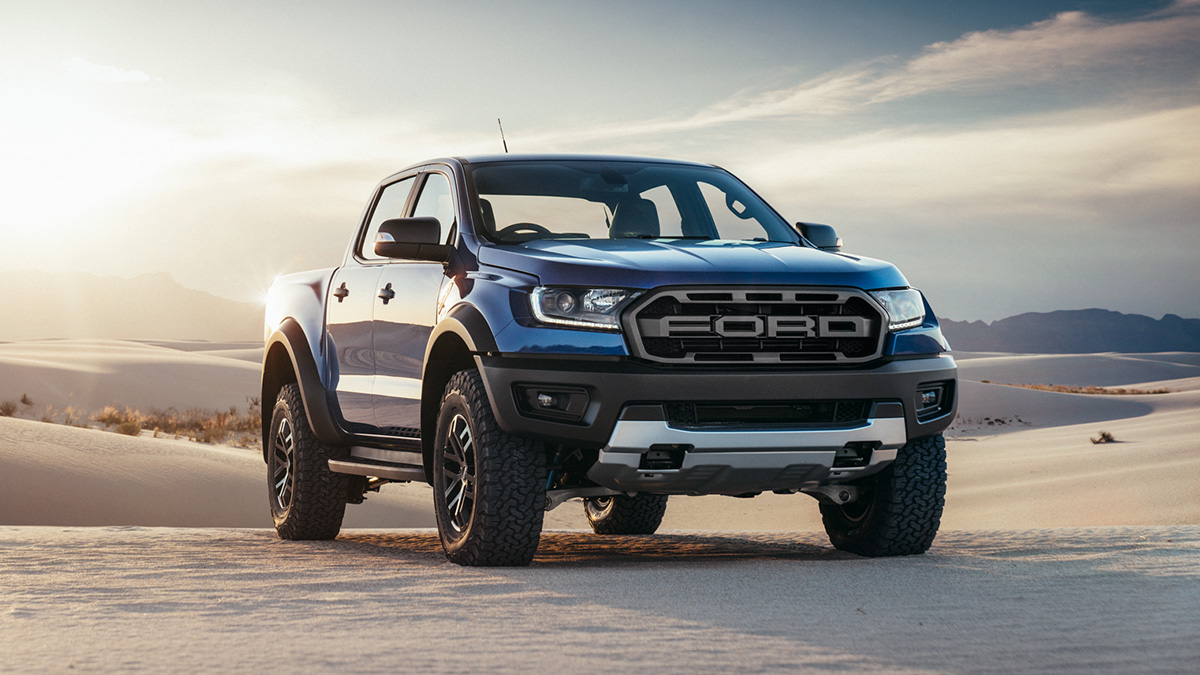 Ranger, Territory push Ford PH to 9,855 units in sales for H1 2021
View other articles about:
Read the Story →
This article originally appeared on Topgear.com. Minor edits have been made by the TopGear.com.ph editors.
Share:
Retake this Poll
Quiz Results
Share:
Take this Quiz Again
TGP Rating:
/20