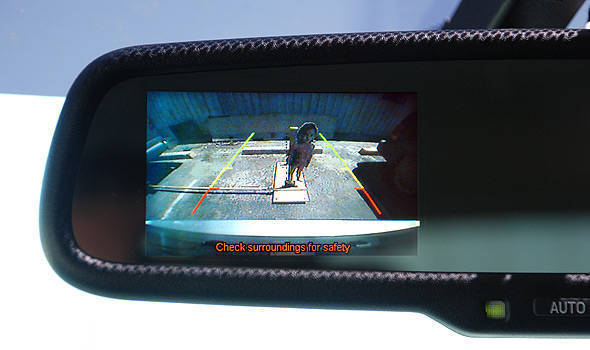 A study has revealed that a vehicle equipped with a backup-camera system with its related display located in the rearview mirror is less likely to encounter an accident reversing compared with a vehicle that has its camera display somewhere in the center console.

For the study, engineering and scientific consulting company Exponent ran tests involving more than 70 drivers who did a series of backing maneuvers. The vehicles used in the tests were three Ford Edge models equipped with backup cameras. The first vehicle was equipped with an eight-inch display in the center console, the second with a 4.3-inch display located slightly higher in the center console, and the third with a 3.3-inch display in the rearview mirror. Using a sophisticated eye-tracking system, each driver's eye movement was monitored during reversing tasks while a computer collected acceleration and brake-displacement data.

The study found that those driving a vehicle equipped with the mirror-integrated display had a scan pattern that closely resemble typical behaviors of drivers, spent more time utilizing the display, and had a higher percentage of productive glances to the display and mirrors. They also reacted twice as fast in potential accident situations compared with those driving vehicles equipped with displays in the other locations.

"A number of previous studies (conducted by the United States' National Highway Traffic Safety Administration) have shown that rear-camera systems reduce backover accidents and that mirror-integrated rear camera displays are more effective than those located in the center console," said Douglas Young, chief of Exponent's human factors group which oversaw the study. "Our conclusions supported these findings yet also revealed how mirror-integrated displays have additional, significant advantages. In short, by placing the rear-camera display in the mirror, you can increase display usage, improve driver scan patterns, enhance productive gaze durations and minimize reaction times."

Exponent was commissioned by Gentex Corporation, a supplier of "smart" rearview mirrors, to conduct the study based on automaker's requests for an evaluation of the mirror's effectiveness as a location for displaying rear-camera video.

"Most drivers agree that the mirror is the safest, most intuitive and ergonomic location for backup camera displays. But we needed an objective evaluation of display performance and a better understanding of how drivers interact with rear camera displays," said Gentex senior vice president Mark Newton. "The mirror has always been used as a display. It's where the driver constantly looks for input needed to make driving decisions. It's only natural, then, to deliver additional driver warning alerts via the mirror display."