Read on to see how your favorite brand ranks
Jul 2, 2010
CAR BRANDS IN THIS ARTICLE

"Customer service performance is reported as an index score based on a 1,000-point scale," J.D. Power said in a statement. "Toyota ranks highest, achieving an overall score of 805."

Toyota, the leading brand in the Philippines in terms of sales, is the only brand that ranked above the industry average of 795 points. It is followed by Ford, Kia, Honda and Isuzu.

J.D. Power noted that Isuzu posted the biggest improvement in customer service performance with a score of 791 in 2010 from 764 last year. 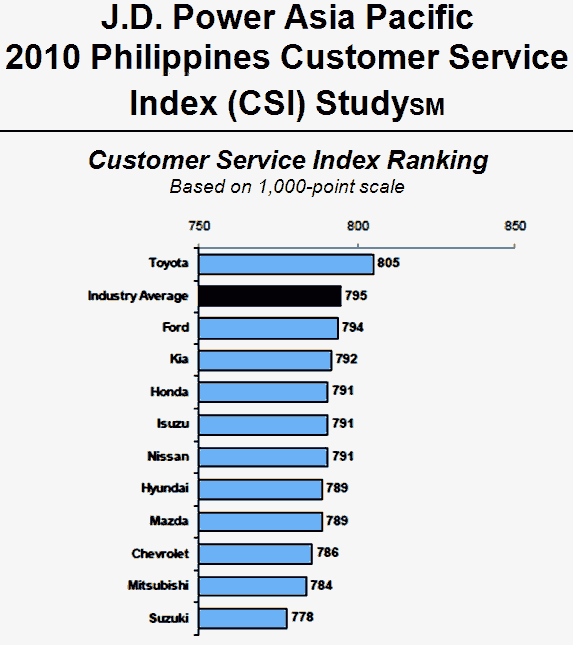 The J.D. Power CSI study in the Philippines measures the satisfaction level vehicle owners get when they visit an authorized dealer or service center for maintenance or repair within the first two years of car ownership.

Noel Cabangon song tells motorists how to behave well
View other articles about:
Read the Story →
This article originally appeared on Topgear.com. Minor edits have been made by the TopGear.com.ph editors.
Share:
Retake this Poll
Quiz Results
Share:
Take this Quiz Again
TGP Rating:
/20