The significance of the Honda NSX 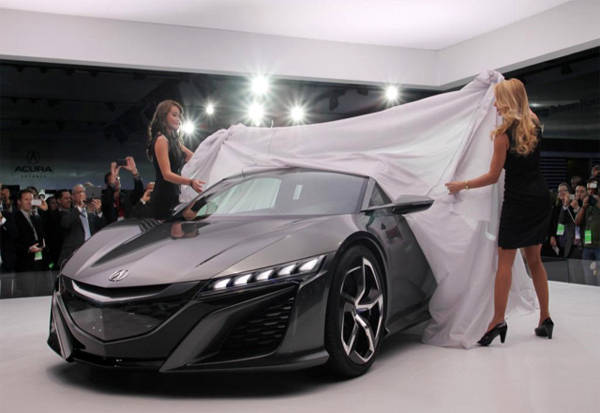 There's a lot of big news coming out of the Detroit motor show. But the most significant tidbit for me is the concept NSX, which debuted in 2012 and was briefly seen in The Avengers as Tony Stark's new sports car. The production NSX isn't expected to roll off the factory until 2015 at the earliest, and it can't come too soon.

Don't get me wrong. Honda and its luxury brand Acura make some of the most sensible, well-built cars on the planet, but they have gone so PC that the absence of mojo is glaring. Again, don't get me wrong. My previous daily driver was an Accord, and I've recommended Civics, Citys, Jazzes and CR-Vs to many friends and relatives through the years. My mother's treasured car is her pink (!) 2005-model Jazz; my mother-in-law has a similar love affair with her 2007-model CR-V; and my father-in-law's trusted ride is his 2004-model CR-V. Reasons for buying? The usual suspects: build quality, sensible style, good performance and resale value.

The thing is, the competition--particularly from Hyundai and Kia--has caught up. More important, they also have a touch more style among their mainstream products than Honda, to the point where they make Honda's current lineup look stodgy. Before you throw that beauty-is-in-the-eye-of-the-beholder argument (which is true), let me point out that in this case, I'm the guy doing the beholding. And I'm not alone in this assessment. People I know who can well afford the CR-V have chosen the Hyundai Tucson or the Kia Sportage. The current-generation Civic is selling well, sure, but do the rounds of the automotive press--local and foreign--and you may well come across unflattering adjectives like "bland," "ambiguous" and "derivative." Let's not forget Ford, which is on a styling renaissance with the likes of the Fiesta and the Focus.

Sex sells. You know it, and I know it. It keeps marriages alive, it riles the bishops to no end, and it captures our basest instincts.

Whatever happened to the Prelude and the Integra with their screaming, four-banger VTEC engines? Where is the S2000 with its F1-esque, 9,000rpm redline?

I believe that Honda can--and I appeal to Honda to--make the NSX happen, and it will be right smack in many people's radar screens again. Not because the car will be bought by the thousands, but because of the halo effect it will bring to the rest of the line. Make it happen and a psychological trickle down will affect the engineers, the product planners, and the designers at Honda.

The first-generation NSX was Honda's supercar project, a gathering of the Japanese carmaker's best and brightest engineers to make a better Ferrari than Ferrari could ever make at the time. And they (mostly) succeeded. Honda being Honda, the NSX didn't quite have the sexiness of the benchmark Ferrari 348, but it may not have mattered because the final product was a technological achievement: lightweight aluminum body, high-revving V6, mid-engine design, handling inputs by the great Ayrton Senna, and a cockpit with 360-degree visibility inspired by the F-16.

To top it all off,  it was a supercar that would start every time! It had the performance of a Ferrari and the reliability of an Accord.

It was a fighter plane for the road, for crying out loud. To this day, I still remember seeing it flying around a corner, driven by Harvey Keitel's character in Pulp Fiction. How cool was that message, right? Even professional killers drive Acuras.

Actually, the Gen-2 NSX might have come out already if the economic conditions of 2008 hadn't been so lousy. The original plan was to put a V10 in it, but now it looks like the final car (cross your fingers) will be a hybrid with a V6 and all-wheel drive.

Make it as green and thrifty on the gas as you want it. It's fine with me. Just don't kill its spirit. If Honda could just stop being Honda and do something crazy for a change, that would be awesome news and would give its rivals pause. Or if the F-16 was the old benchmark, then maybe they should ride the wave of the future: F-35, baby!

Because Chevrolet makes "normal, sensible" cars like the Cruze, the Trailblazer and the Orlando, but doesn't forget to have crazy fun with the Camaro and that bodacious new Corvette Stingray. Ford, too, is learning to make really good, small cars like the Fiesta and the Focus, but goes nuts once in a while with the likes of the Boss 302 and the Shelby GT500 Mustang.

Meanwhile, Honda has the CR-Z. And perhaps they can interest you in how much stuff you can put in a Jazz?

A Top Gear PH reader asks: Is the Suzuki Celerio worth owning?
View other articles about:
Read the Story →
This article originally appeared on Topgear.com. Minor edits have been made by the TopGear.com.ph editors.
Share:
Retake this Poll
Quiz Results
Share:
Take this Quiz Again
TGP Rating:
/20