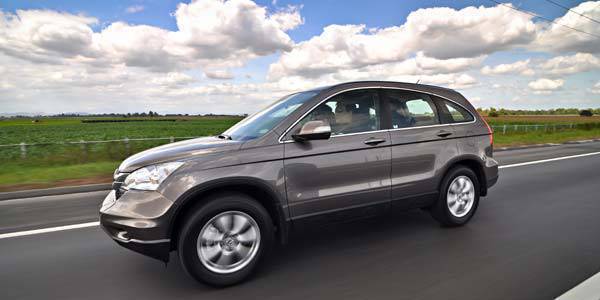 Honda's current-generation Comfortable Runabout Vehicle or CR-V, as it is popularly known, is getting along in years. Having been around since 2007, the Honda CR-V is now going through a midlife crisis in car-model years despite leading the compact sport-utility category with cumulative sales of almost 9,000 units.

So how does Honda make a popular model like the CR-V even more attractive to new car buyers? For one, the Japanese carmaker recognizes the fact that since buyers of the compact crossover would sooner cross a fast food drive-through lane than a river, Honda decided the third-generation CR-V's facelift should make it look more urbane, more cosmopolitan than a pair of Frye boots in a polo field.

At first glance, it's easy to dismiss the chromed upper grille and the honeycomb lower grille as the only main tweaks. A closer look, however, reveals that both front and rear bumpers have been refreshed, with the fore and aft wraparound lower garnish trimmed to expose more of the body-colored bumpers. Rounding out the exterior's styling tweaks are the new seven-spoke, 17-inch alloy wheels.

Step inside the CR-V and you soon find out why "comfort" is its first name. For one thing, all the essential controls are within reach of the driver, even the dash-mounted automatic shifter. Though the foldaway armrest was just marginally increased in size, it is a godsend on long roadtrips. The dual glovebox is also a welcome feature, particularly since the top one has a USB cable for your MP3 player. If your MP3 player happens to be one that requires an AUX input, one can be found in the floor-mounted center console which also happens to have a spacious storage box that can hold up to 12 CD cases. And then there's Honda's Speed-Sensitive Volume Control that increases the sound system's volume at just the right decibel level as the cabin becomes noisier, making it less intrusive than that of another Japanese brand.

Back seat passengers aren't forgotten as they not only get a good view of the road ahead thanks to their seats being mounted a little over six inches higher than the front seats. Their large rear armrest has two cupholders--useful for those aforementioned long road trips.

On the 2.0's driving dynamics, you'll find that the updated CR-V is a lot more quiet thanks to the use of additional soundproofing materials. A slight change in the front caster's angle has improved its steering response making quick lane changes even more effortless. Throttle response is quick for an automatic, and shift shock is practically nonexistent. Even the combined city/highway/provincial back road driving returned a very economical average fuel consumption of ten kilometers per liter despite thrashings the CR-V received in overtaking maneuvers.

Then again, the thrashing happened because the automatic transmission-equipped, 2-liter CR-V lacks top-end speed. Sure, the CR-V was capable of darting from one lane into the next at the start of an overtaking maneuver; but halfway through, it feels like the CR-V needs a little more push forward just to get past and in front of the vehicle you're overtaking. Using the button on the automatic shifter that will downshift the transmission into third gear hardly helps. We even tried turning off the aircon at the onset of a maneuver just to get more power out of the engine, but still no go. Considering the "convoys" of trucks and motorcycles on two-lane national highways, be prepared to say a prayer before embarking on a long stretch of overtaking to avoid oncoming traffic.

Going back to the automatic shifter, with semi-automatic ones being all the rage these days, it's surprising why Honda can't offer the technology on the CR-V when their lesser-priced cars like the Civic and the Jazz have it. I'm sure more driver-control on when to downshift and to what gear could make up for the engine's lack of power just a little.

The 2-liter, automatic-equipped Honda CR-V is the perfect crossover for the city. It's roomy, comfortable and fast enough for the metro's streets. Just don't take it out to the country because an effortless runabout in the national highway this is not.

2009 Toyota Vios 1.5 TRD review
View other articles about:
Read the Story →
This article originally appeared on Topgear.com. Minor edits have been made by the TopGear.com.ph editors.
Share:
Retake this Poll
Quiz Results
Share:
Take this Quiz Again
TGP Rating:
/20