Review: The Genesis G70 is a head-turner, but is it a worthy 3-Series rival?

The Genesis G70 is the latest plucky upstart that thinks it can waltz onto the premium-badged compact sports-sedan battlefield and set up camp among the dominant likes of the BMW 3-Series, the Mercedes-Benz C-Class, and the Audi A4, while making life even harder for the dwindling Jaguar XE. It’s taken a few decades for people to come around to the idea of Korean cars being more than just a low price and a long warranty. Are we now ready to buy their posh sedans?

Because yes, the young Genesis brand hails from South Korea, where it’s actually the premium-challenging offshoot of the Hyundai-Kia empire. The G70 sits on the same platform as Kia’s impressive Stinger GT sports sedan, but it prioritizes sophistication and comfort over the V6 Stinger’s more aloof tail-out shenanigans.

Explain a bit more about what the G70 is, please. 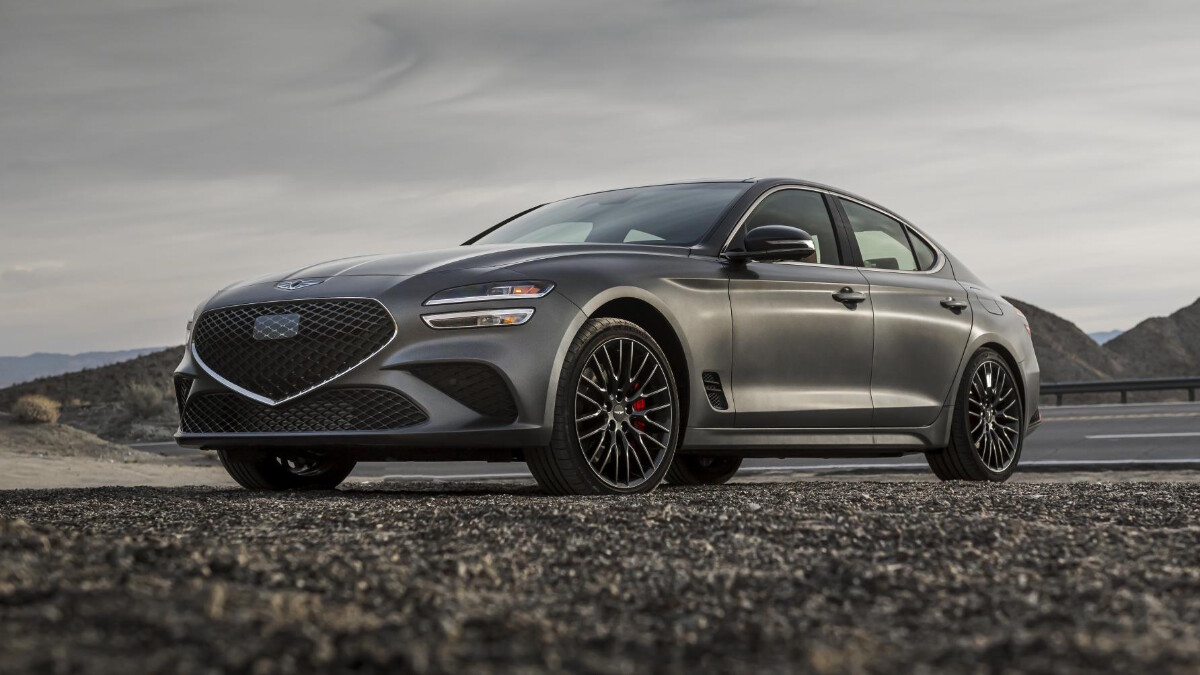 This G70 is not really a new car—it’s in fact a well-facelifted version of a G70 that’s been on sale in the Far East and North America since 2017, making it older than the current 3-Series and C-Class. However, its striking facelift has disguised that cleverly, thanks to aggressive split slender light clusters and a beaky ‘crest’ grille that blesses the G70 with considerable road presence.

In fact, from just about every angle, this is a notably handsome and well-proportioned car. One that turns heads, and confuses onlookers as they rattle through their mental rolodex trying to work out what’s sauntering by. The designer is ex-Bentley, and there’s more than a hint of baby Flying Spur about the G70. A good start, then.

What different models can I choose from? 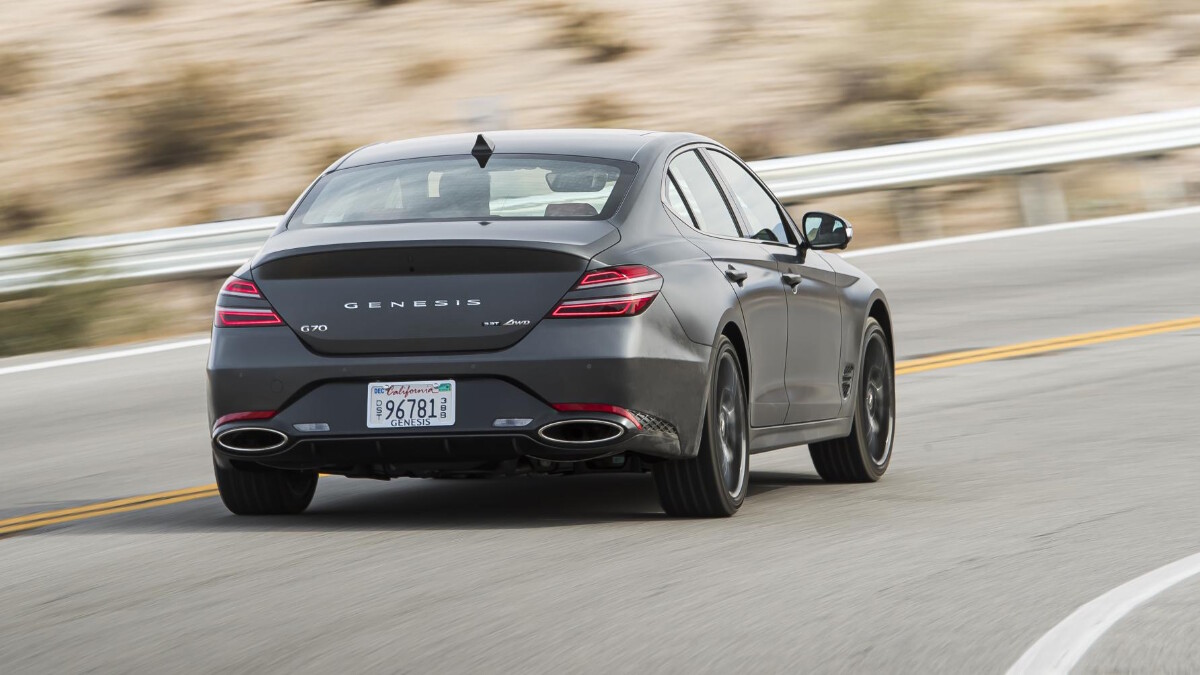 We’re looking at the regular four-door sedan here, but there’s also a wagon on the way, though Genesis calls it a Shooting Brake. Meanwhile, the engine range is a fraction of the size of what you’d usually expect in this class, but it targets the heartland of sales. Choose from a 2.0-liter turbo four-cylinder gasoline engine with either 195hp or 242hp, or a single four-pot turbodiesel good for 187hp and 400Nm. Both are joined to an eight-speed automatic gearbox as standard, with rear-wheel drive. There’s no manual, no all-wheel-drive offering, and no plug-in hybrid.

So what’s the Genesis USP? 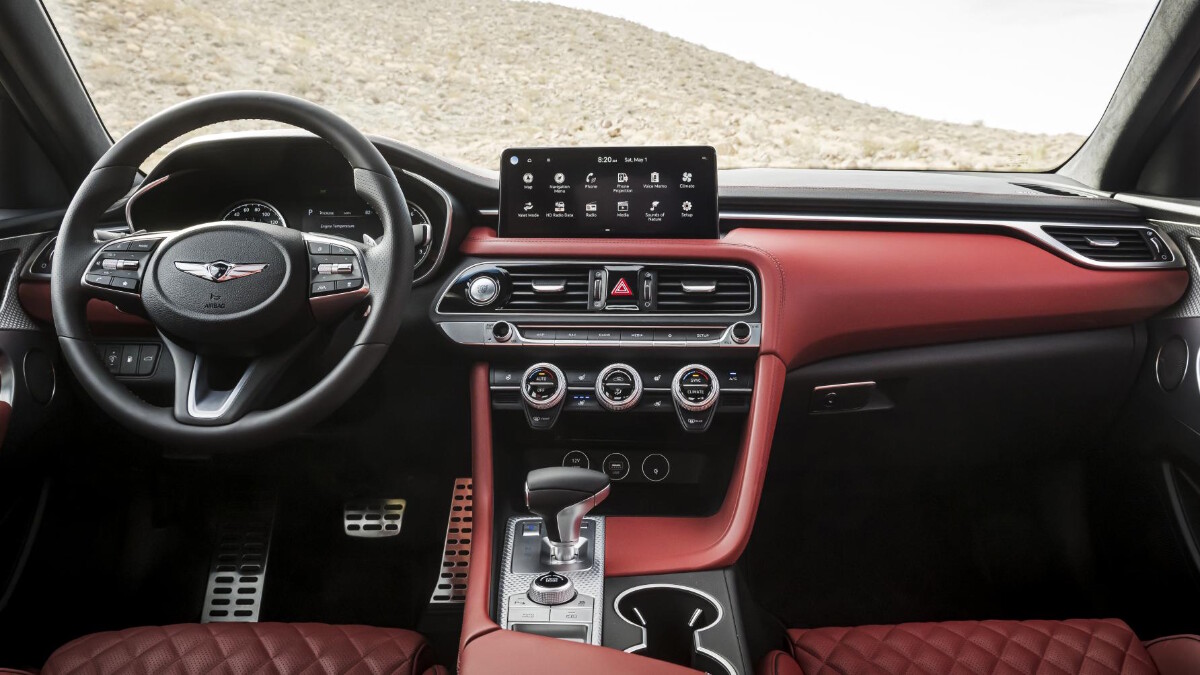 Besides the G70’s looks, it’s more about the promise of a stress-free ownership experience. Like its parent-brands, Genesis lobs in a five-year warranty. What’s more notable is the concierge service—when the car needs a service, it’ll be collected from your house with a courtesy car supplied. Genesis reckons it can operate entirely without traditional dealers, though you’ll spot pop-up stores attempting to put bums on seats in big shopping centers.

Essentially, Genesis is betting on customers who’ve become jaded with a slight sense of complacency from the regular big-hitters. The brand says it wants its customers to feel like guests in a luxury hotel, and make a big deal out of traditional Korean hospitality. Question is, will the G70 attract enough badge snobs to actually experience any of that? 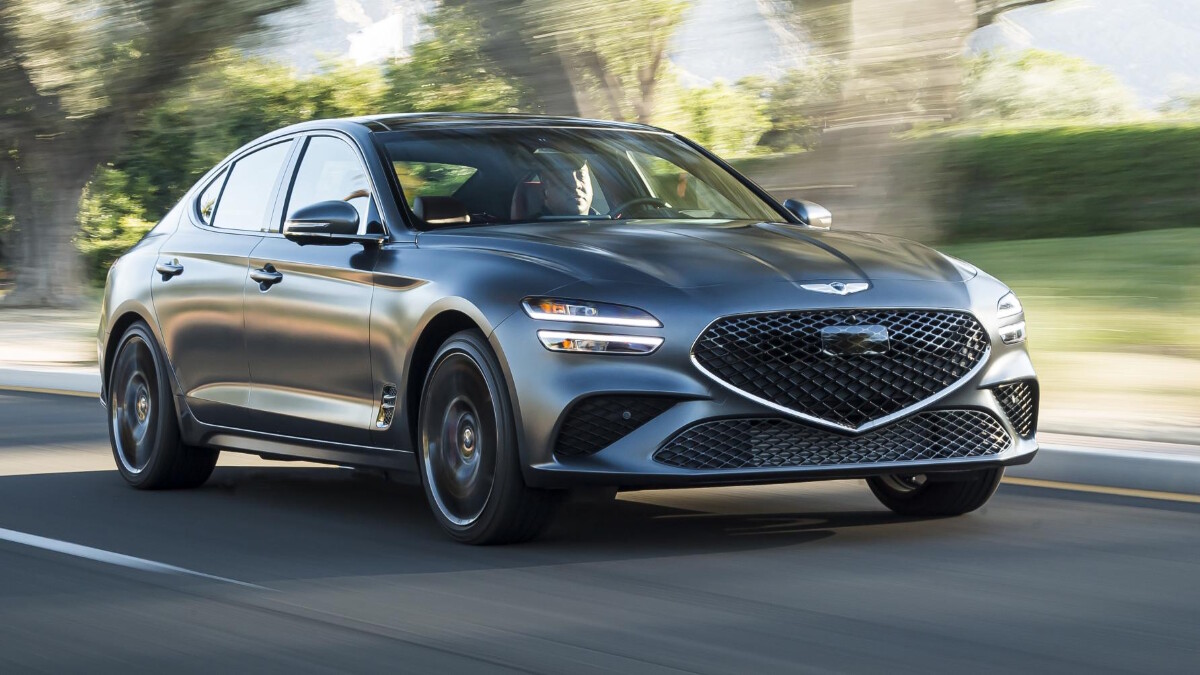 How much of a drivers’ car do you want your junior exec sedan to be? The BMW 3-Series has traded on its well-balanced rear-drive Germanic-ness for decades, but it’s always tightly challenged in sales by the decidedly lackluster A4 and C-Class, neither of which handle with the Bimmer’s verve or precision, but massively outflank the sweet-steering Jaguar XE nonetheless.

Where does the G70 lie in the mix?

The Genesis is not a driver’s car. It may be rear-wheel-drive, but its chassis is numb. The damping is soggy in the default Comfort setting, but rotate the sprung knob to Sport and it overdoes the effect, becomes fidgety and irritable. The steering’s previous relaxed weighting is suddenly hefty, but it offers no sense of the tires it’s pointing.

The gasoline engine, which starts with a rather uncultured growl from cold, is never quite as distantly muted as it is in the Audi, or as responsive as you’d find in the BMW. We tested the 242hp variant, which is good for 0-100kph in a respectable 6.1sec.

We suspect the coding applied to the eight-speed gearbox to make it behave in a European emissions test is to blame for its indecisiveness—it’s prone to a needless downshift when the turbocharged engine itself is actually more than torquey enough to do the job your right foot is asking. It’s all ever so slightly disjointed, lacking the overall polish of the best European junior exec sedans. The brakes are another example: While the calipers say Brembo (for Sport Line models), the pedal says, “I’m very overserved and tricky to modulate.” Weird, considering it ain’t a hybrid.

What if I just want a relaxed wafter? 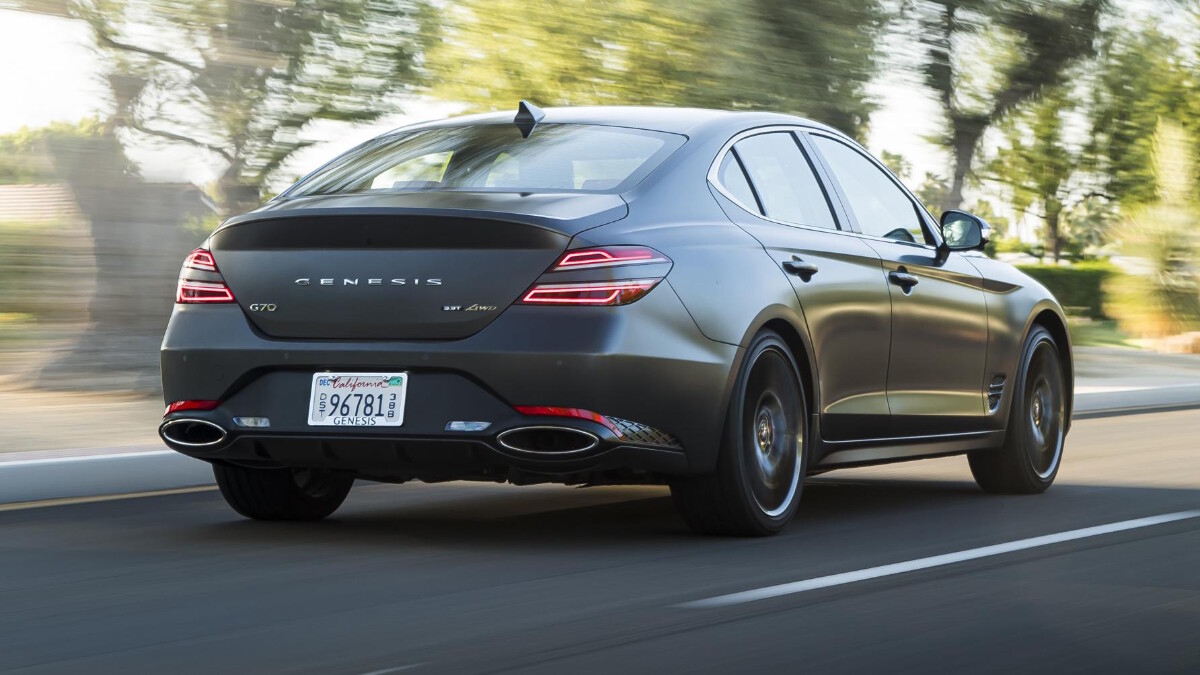 Perhaps we’ve arrived at the Genesis with the wrong expectations. Treat it more as a shrunken barge, not an out-and-out sports sedan, and it’s a decent cruiser with more compliance than more corner-hungry rivals. Thing is, the G70 features quite quick, roll-of-the-wrists steering, and that jars with the car’s chilled-out attitude. It’s as though the engineers have cherry-picked the bits they liked of European contenders and mixed it in with a Korean sense of luxury, and the fusion doesn’t quite gel.

Wind noise is minimal, but there’s a fair bit of tire roar. We’re yet to drive the diesel, which claims to average 17.9-18.7km/L, but we were able to get close to the claimed gasoline consumption figures of 13.2-14.9km/L, with an average of 13.6km/L. 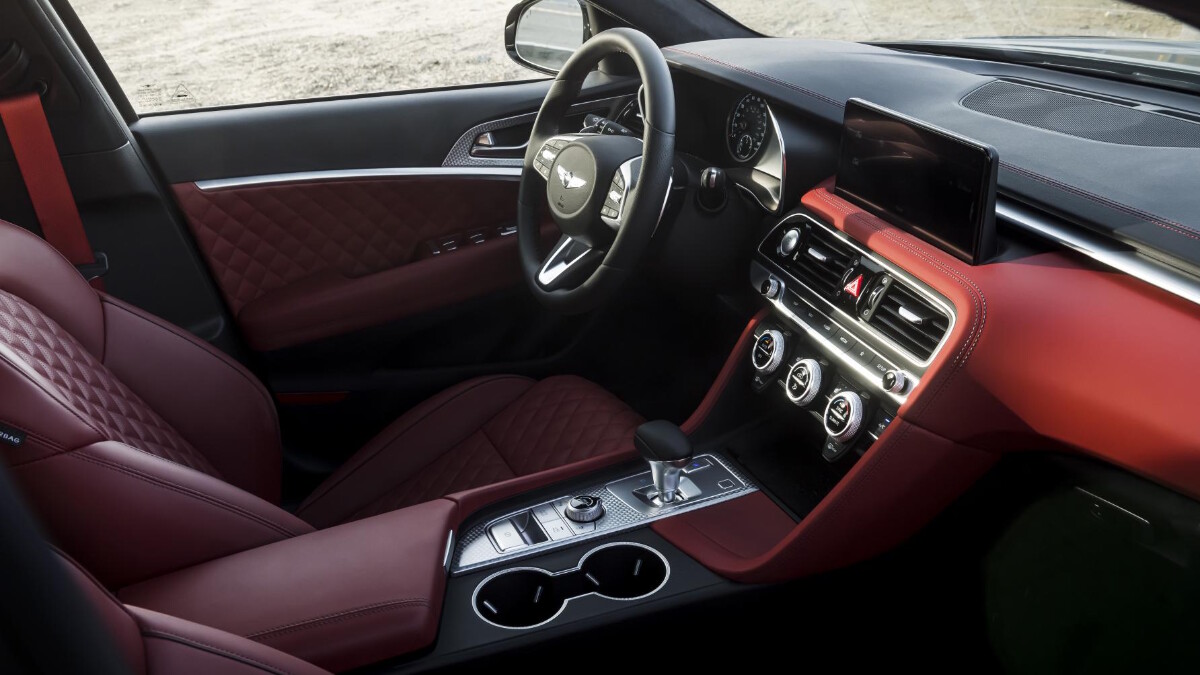 Things get off to a good start inside the G70, which offers a sound driving position with oodles of adjustment in both the fabulously comfortable seat and the electrically telescopic steering wheel. The wheel itself is much more slender than the overstuffed black puddings the German suspects are doing at the moment, and all the better for it.

What else is done well?

The overall layout is very simple to understand, if ever so slightly dated around the vents and the lower reaches of the center console. We like the tactile, chunky climate controls, the big buttons for the heated and ventilated seats, the simplicity of how all these controls are laid out, instead of having been buried in a touchscreen at the whim of a designer who refuses to acknowledge a car is a tool, not just a styling flight of fantasy. Well done, Genesis.

Time for the bad news? 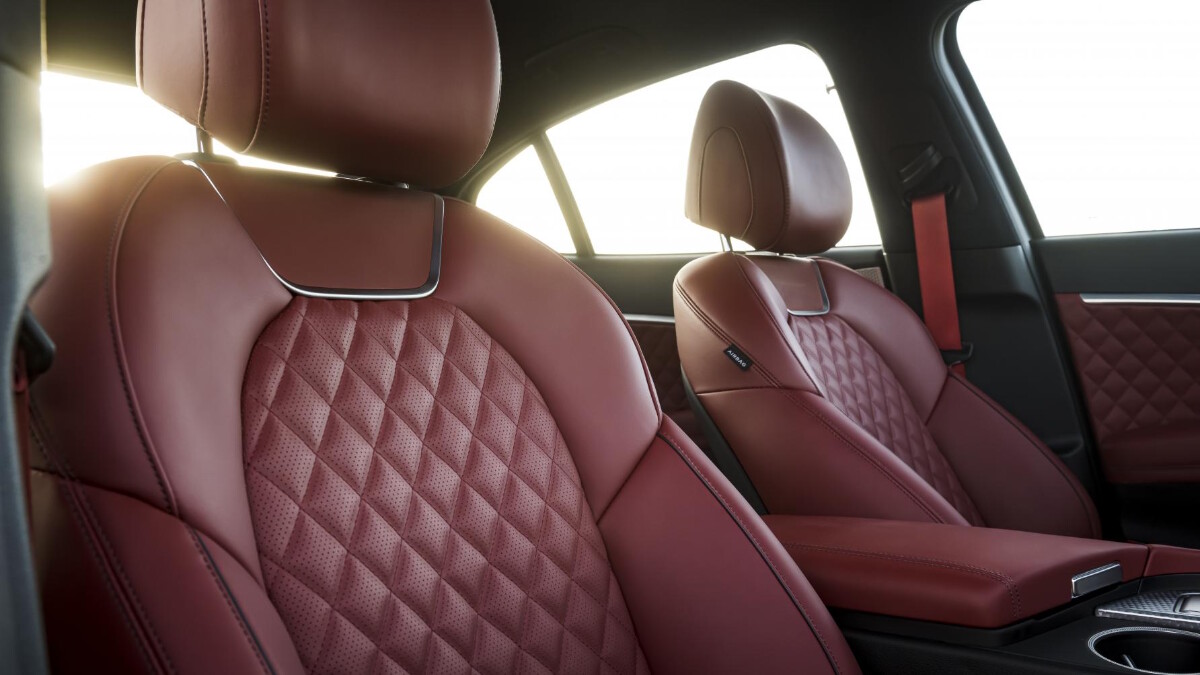 What lets the cabin down is the material choice—or perhaps it’s just the color. The window buttons, the temperature knobs, the center-console switchgear, even the paddle shifters...they’re all silver. At first glance, the cockpit looks expensive as your eye is potentially fooled that this is all cool alloy and metal, but one touch betrays it’s all plastic, and that gives the supposedly premium Genesis the feel of an own-brand MP3 player. Plastic that’s just plastic is less disappointing than plastic pretending to be metal.

Build quality is really tight, however, and the action of the buttons themselves, the gear selector, and the door handles feels solid. New for this ‘facelifted’ G70 is the 3D-effect digital eight-inch instrument display with its array of dial fonts and colors and the latest 14.5-inch main touchscreen from the Hyundai-Kia empire.

It’s swift to respond and supports Apple and Android smartphone mirroring, though only with a cable rather than wirelessly. This seems incongruous when there’s a wireless charging pad on board, but regardless, sockets for charging devices are plentiful enough, as are cubbies to store them. 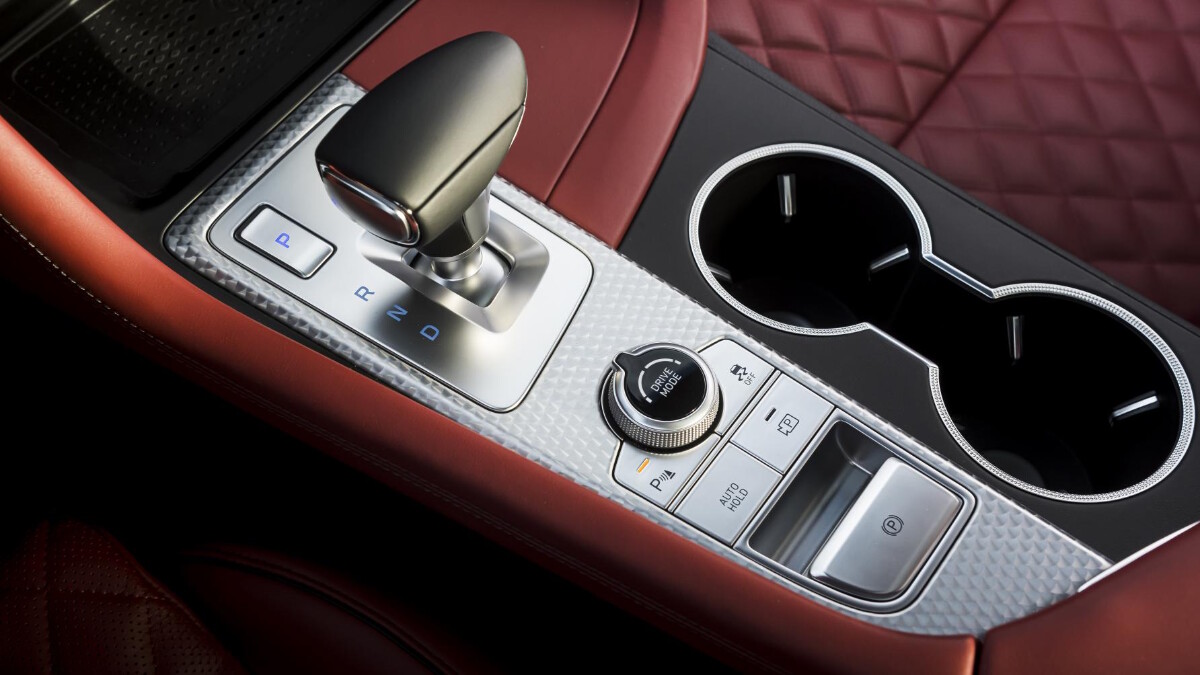 There are advantages to being a little more dated than the current crop, too. There’s no reliance on haphazard voice command, and the Genesis has no touch-sensitive buttons on its steering wheel or center console. Here’s hoping this common sense sticks around for the next-gen G70 and beyond.

Meanwhile, Hyundai’s brilliant blind-spot cam, which pops up with a view down the side of the car in the driver info screen when you turn on the indicator, also appears here, and remains an excellent feature. 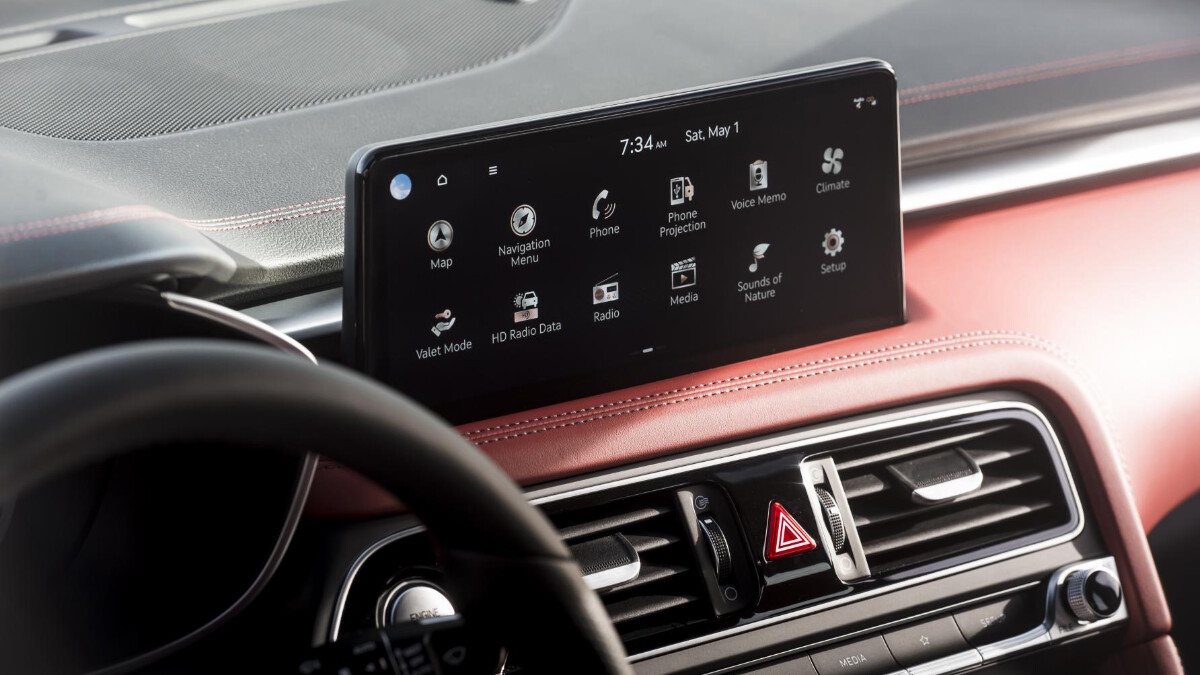 While the front seats are adequately spacious, rear room for adults is cramped, particularly footroom under the front seats and headroom for taller passengers. An Audi A4 does it miles better, but if you’re coming from, say, the poky Jaguar XE, you won’t notice. This lack of space betrays why there’s no hybrid battery offering—this platform, as shared with the Kia Stinger, simply doesn’t have the room on board.

Trunk space is on the small side for the class at 330 liters. The rivals—you know the ones we mean by now—offer close to 500 liters. 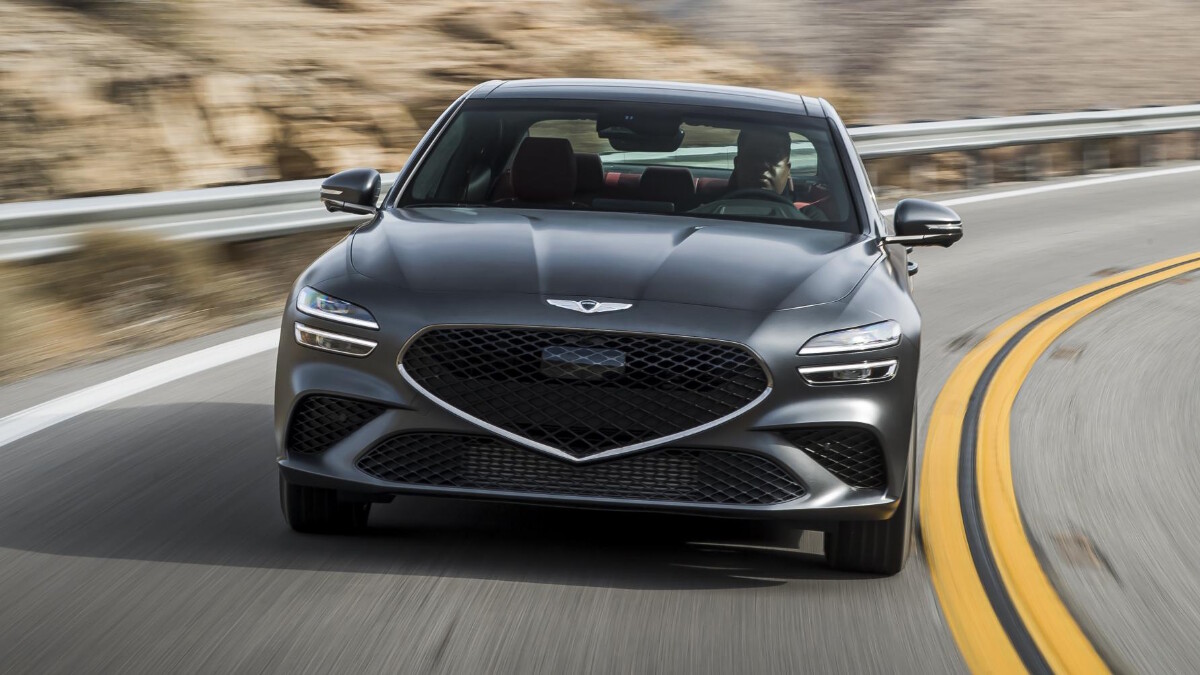 Scratch beneath the surface of the G70’s stylish surface, and elements of the interior and the powertrains betray that this isn’t a brand-new car—and in this class, that’s enough to put it onto the back foot from day one.

That said, it’s an easy-to-operate device with strong equipment levels, decent refinement, and genuinely arresting looks. The ownership package looks healthy, too. It isn’t a patch on the best in class to drive, but you could argue that only matters to a handful of enthusiasts these days, now that connectivity, cost per month, and sheer brand value matter more. The G70 might be able to hold its own, but it probably needs replacing sooner rather than later if it’s to avoid ‘doing an Infiniti.’ 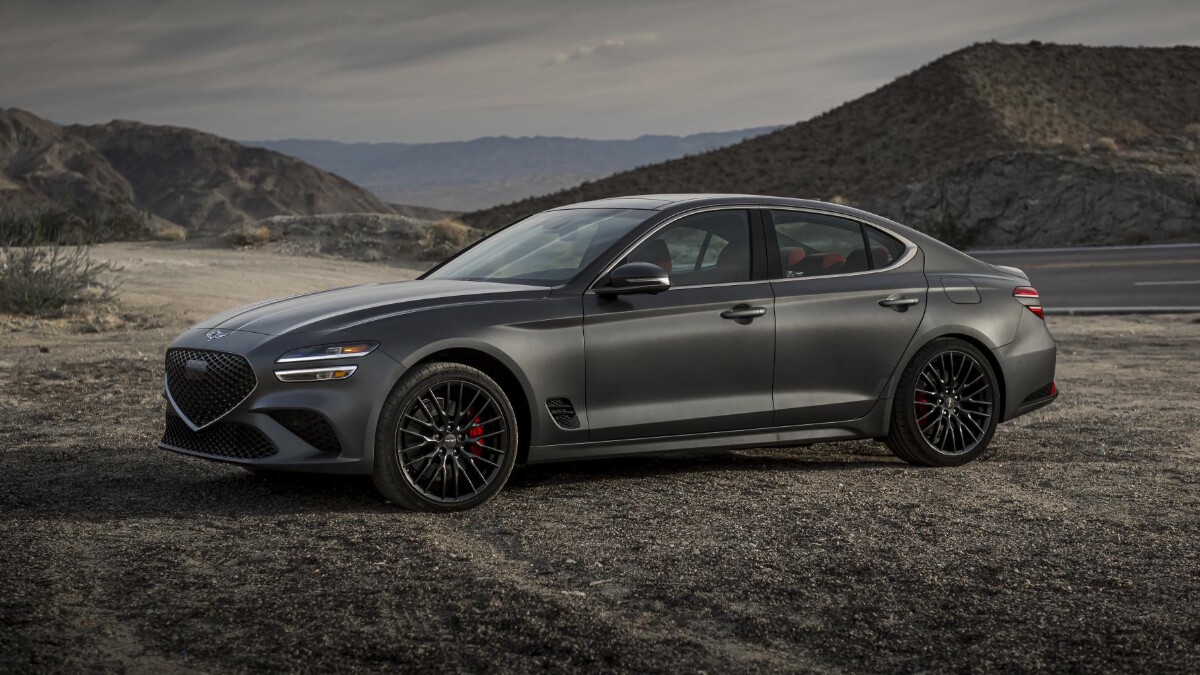 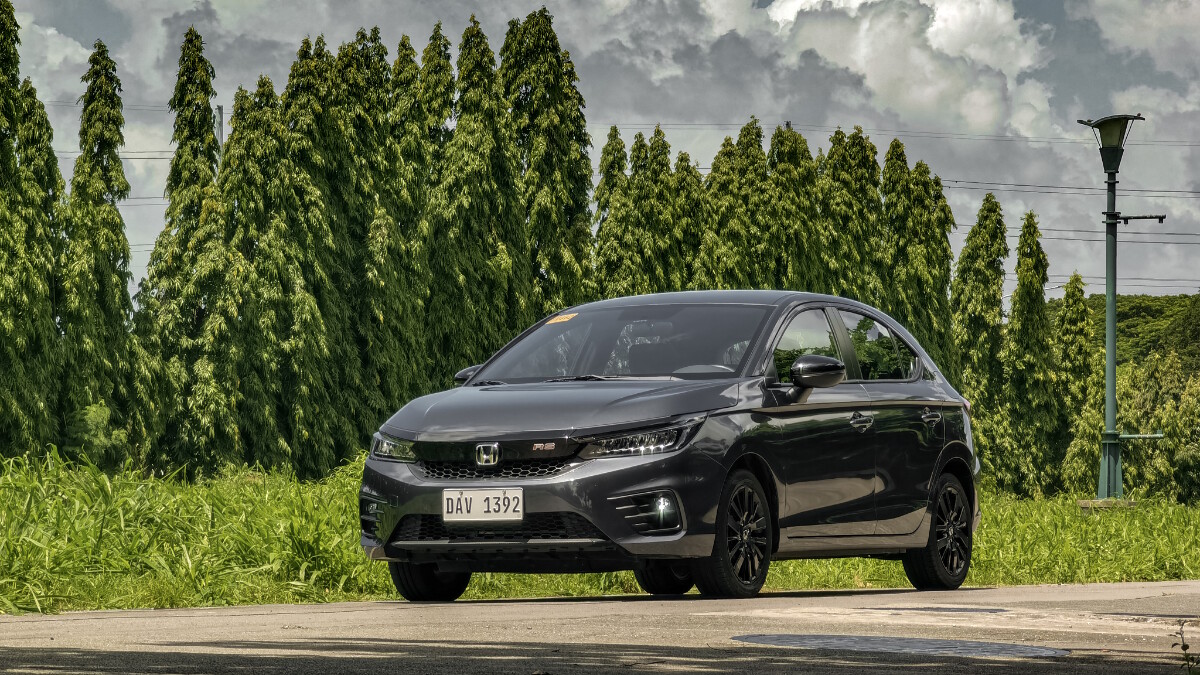 Review: 2021 Honda City Hatchback 1.5 RS
View other articles about:
Read the Story →
This article originally appeared on Topgear.com. Minor edits have been made by the TopGear.com.ph editors.
Share:
Retake this Poll
Quiz Results
Share:
Take this Quiz Again
TGP Rating:
/20