Practicality, reliability and quality
by Jason Dela Cruz | May 4, 2014
CAR BRANDS IN THIS ARTICLE 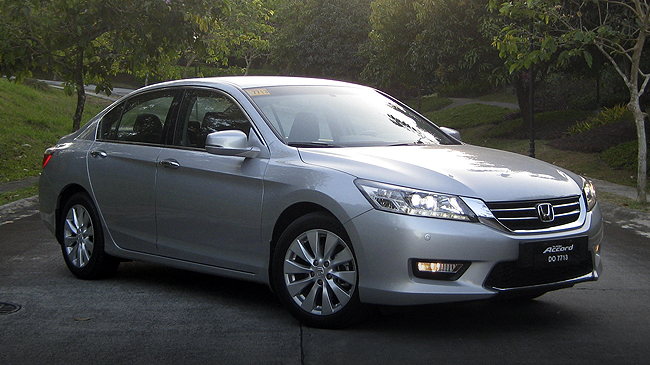 The Honda Accord has been one of the best-selling cars in the US because it ticks three of the most important boxes: practicality, reliability and quality. That nameplate has a particularly solid reputation.

Since it arrived in our market 20 years ago, the Accord has become the quintessential midsize sedan. That "prestigious" tagline along with excellent driving dynamics is what makes it popular. We've been anticipating the ninth-generation's arrival. 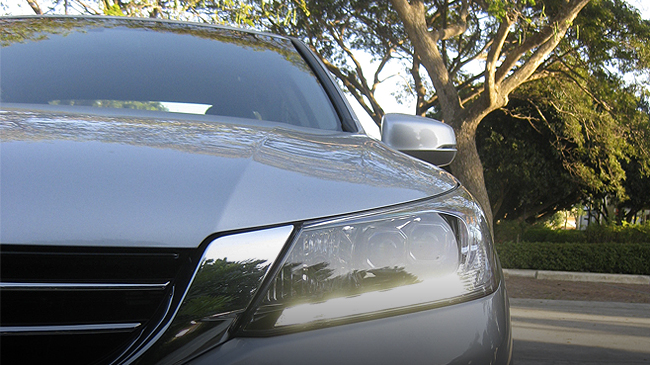 The new Accord has a sportier flair with better aerodynamic efficiency. It's conservative yet classy--a balance owing to the car's simple approach. It looks bigger than it is at first glance. But once you grasp its proportions, you realize it's actually more compact (shorter by three inches than the previous model), which reflects how this new one handles.

The front looks smart, with a chrome grille converging with the headlights, getting rid of the gap in between. A chrome strip below the intake gives it a consistent look. The side profile is also neat with a low belt line, not just for better aesthetics but better outward visibility as well, while a pair of character lines aid airflow.

Clear indicators give the rear an uncluttered look, while a chrome trunk strip and bumper garnish give it a harmonious look with the front. The bumper is naturally designed for the 3.5-liter variant with provisions for the exhaust on each side. With this 2.4's single exhaust, it looks like the left pipe is missing. It's something carried over from the previous model, and we get that it's a practical move. 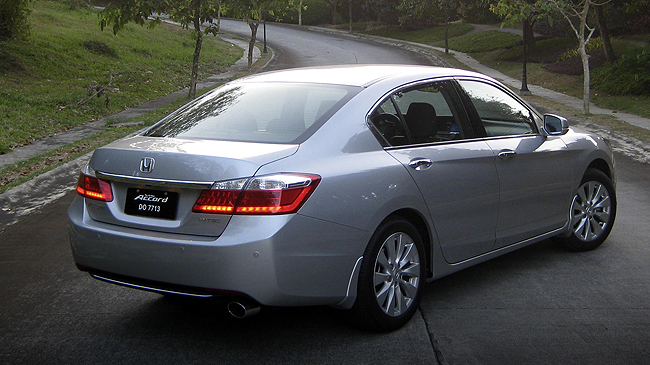 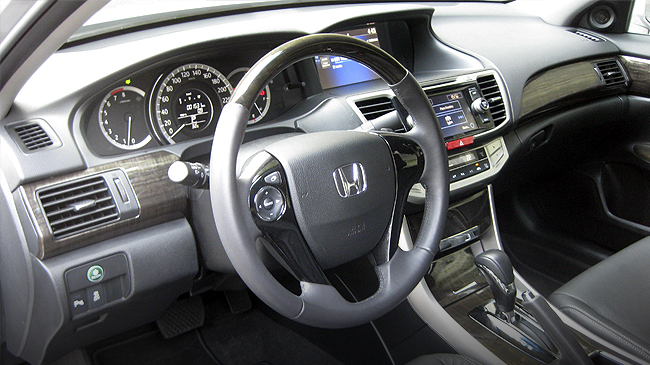 There's a premium feel we've come to expect from a Honda. Tactile materials surround the interior--leather, wood trim, a touch of chrome, and brushed metal bits. The wood-and-leather combo does give the cabin a consistent theme all around, and you don't feel you're in the lower-spec variant. It's well thought of and well equipped. NVH is better filtered-out, in part due to the new suspension setup, a much lighter front subframe and better aerodynamics. There's also a noise control system that defuses road noise.

We've grown accustomed to Honda's layered effect gauge cluster. It's a modern touch without overdoing it. As for the steering wheel, it's one of the best to hold. Tilt/telescopic adjustment and electronically adjusted seats help give you the proper driving position, while slim A-pillars offer enhanced visibility.

This Accord feels more driver-oriented. Nevertheless, comfort for rear occupants is given just as much importance. Six-footers have legroom to spare, despite a decrease in length and wheelbase. 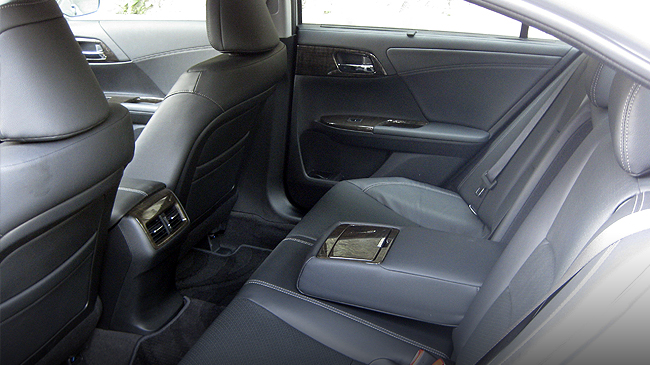 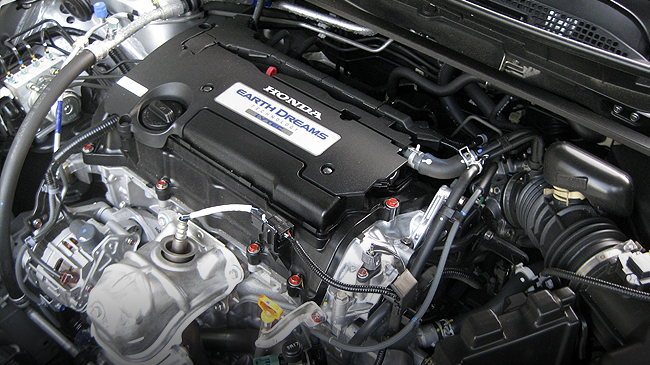 This Accord has a somewhat rough engine note upon start-up, giving a hint of its liveliness. The Earth Dreams Technology 2.4-liter DOHC four-cylinder engine has an output of 173hp and a torque of 226Nm, and is mated to a five-speed automatic transmission. With this kind of numbers, the Accord makes for a good scrap with the Mazda 6.

We left it on Econ mode for most of the duration of this test. Fuel consumption yielded a combined cycle of 11.5km/L. We had the car for a week and spent about 80-90% around the metro. Overall consumption was 7.5km/L, which is pretty decent. Keeping the spherical eco meter green to return better numbers becomes a contest with yourself.

That doesn't mean we deprived ourselves of spirited driving. From time to time, we turned off the Econ mode and sampled this Accord's pace in Sport mode. The throttle is smooth and responsive. The five-speed auto may seem dated--particularly with the US market getting a CVT--but this transmission is still competent.

A number of attributes make the new Accord more engaging to drive, such as a new MacPherson front strut suspension, a high-strength front subframe, and a shortened length and wheelbase. All those put together make the new model feel more stable. A strut brace also helps minimize body roll. The ride feels tightly sprung, more responsive, and at the same time more refined. Thanks to the suspension setup, the car feels as if it's gliding (a ride comparable to the Mazda 6's), making it particularly comfortable on long drives. It's also quite light to take around town.

Power steering is now electric with adequate feedback. It's still nicely weighted, though. Combined with a tiller that's lovely to hold, it's easy to soak up the Accord's agility.

This Accord has a number of neat features. There's a start/stop system, an info display with consumption feedback, an instant fuel meter (similar to the graph of Subaru), and an integrated rearview camera. The audio system is also quite solid.

Not to be left out, the Accord now sports daytime running lamps. It also has cornering lights that slowly fade away when you straighten the steering wheel rather than going off abruptly.

In the last few years, Honda has taken its eyes off what it's really known for--driving dynamics and performance--to concentrate on its green direction and focus on the mainstream market. As a consequence, its cars have gone bland.

While the Civic and the CR-V have matured and lost a bit of that driving inspiration, the Accord brings back that fun factor--an evident rethink of Honda's philosophy from way back. The new model goes back to basics and is much improved in every aspect.

Review: Ford Fiesta 1.0 EcoBoost
View other articles about:
Read the Story →
This article originally appeared on Topgear.com. Minor edits have been made by the TopGear.com.ph editors.
Share:
Retake this Poll
Quiz Results
Share:
Take this Quiz Again
TGP Rating:
/20