4 Reasons why the Bugatti EB110 was the OG hypercar

Word about the internet is Bugatti could be prepping a secret, limited-edition special inspired by one of the most enigmatic supercars ever. The grandfather of the Chiron: the Bugatti EB110.

The Bugatti EB110 was revealed way back in 1991, to celebrate the 110th anniversary of the birth of company founder Ettore Bugatti—hence the name. It arrived amid the early ’90s gold rush of supercars. What a time to be alive. 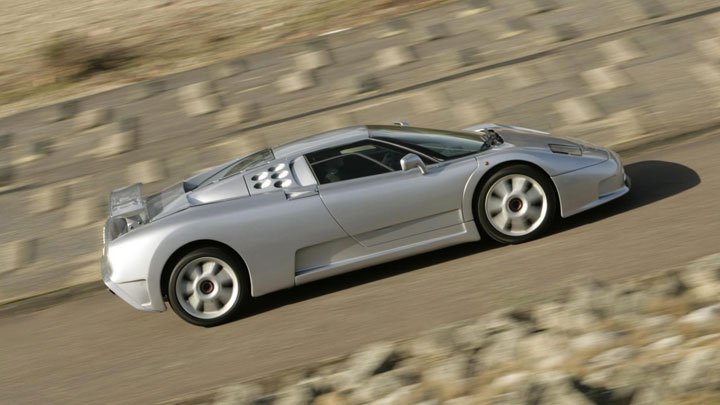 Those were the days of the Jaguar XJ220, the McLaren F1, and the Lamborghini Diablo. It lasted a few years, then Bugatti went bust amid the recession. The brand was bought by the VW Group with an idea for a 1,000hp supercar, and well, the rest is history.

But if 1991 was a bit before your time, that’s pretty much ancient history. Allow us to educate you about why the EB110 was a lot more important that you might think—and why it deserves a 21st Century reboot…

1) It fathered the template for the Veyron and the Chiron. 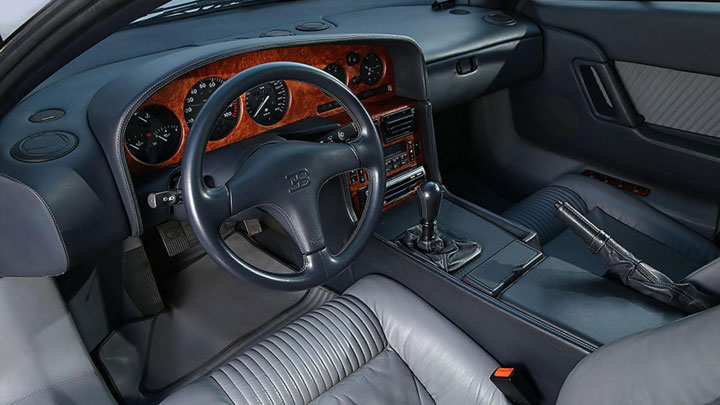 Though the EB110’s engine was small (only 3.5 liters, in fact), it had 12 cylinders, and was boosted by four small turbos. The logic was that, at a time when engine computer control was primitive at best, four small turbos spooled up more quickly than two big ones. So, big power, and teeny (for the time) turbo lag.

What’s more, the power—some 555hp in the standard car, and 612hp in the Super Sport model—was sent to all four wheels. So, what you had was a super-torquey, quad-turbo four-wheel drive supercar. When VW resurrected Bugatti and created the Veyron, it stuck with that recipe for both that car, and its 420kph successor.

And that wasn’t all. While most of the ’90s supercar set was wantonly raw and visceral, the EB110 was more of a gentleman. The cabin was lavished with expensive leather hide and solid wood trim. There was no roadster or targa-roofed model. This was intended to be a supercar with 210mph+ performance that you could pootle to the golf course in. Remind you of anything else with a Bugatti badge on its nose?

2) Bugatti decided to take it racing. 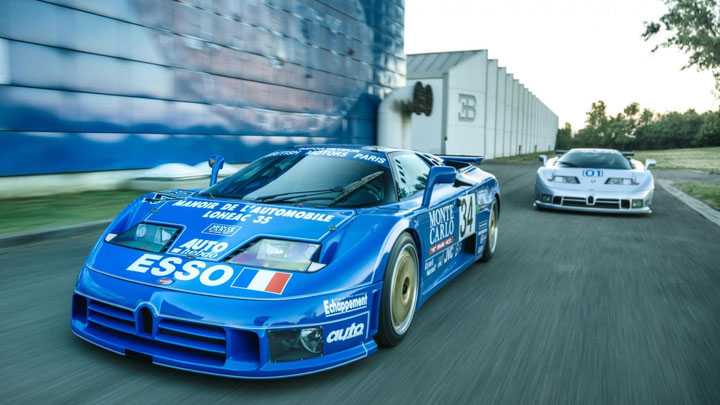 Not terribly successfully, but racing’s racing, and company boss Romano Artioli (who also owned Lotus at one point and named the Elise after his granddaughter) decided racing was the way to sell EB110s. One version, the blue car, was stripped out for competition at the 24 Hours of Le Mans. Its silver sister meanwhile, was readied for battle in the American IMSA series. Neither car was very successful, but for the sheer lunacy of trying to convert a four-wheel drive quad-turbo luxury supercar for track duty, we salute the EB110.

3) It was seriously quick then, and it’s still really fast now. 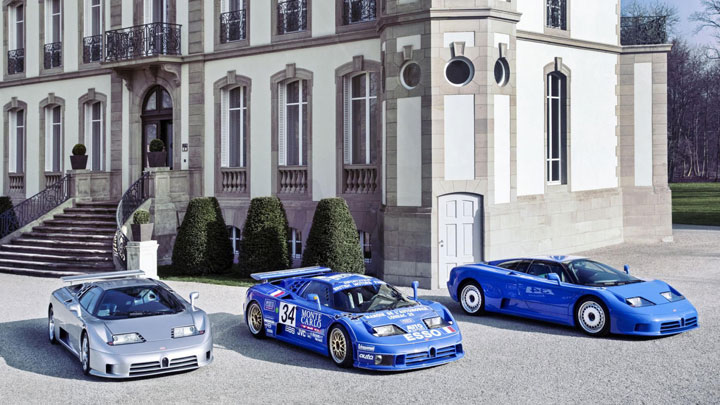 The standard EB110 could supposedly crack 0-62mph in 3.6 seconds and go on to 210mph. With the EB110 Super Sport which followed a mere six months later, power was upped to 612hp and around 150kg of weight was stripped out thanks to carbon fibre body panels. Bugatti claimed this was a few tenths nipper still to 62mph, and the top speed was over 220mph.

The car has been independently tested at between 3.5 and 4.5 seconds from 0-62mph (depending on how brutal you are with its very valuable clutch) and does indeed top out far beyond 200mph.

Now, remember this car has no launch control, it’s riding on tyre technology that predates the World Wide Web, and it has a manual gearbox. Getting it off the line with the boost spooled up without lunching the four-wheel drive system is keyhole brain surgery compared to the hey-YouTube-watch-this ease of pinging a brand-new supercar off the line. So while it doesn’t look as sleek as say, a McLaren F1 or Ferrari F50, don’t be fooled. The EB110 is a shockingly fast piece of kit.

4) It spawned an even maddder supercar you’ve never heard of. 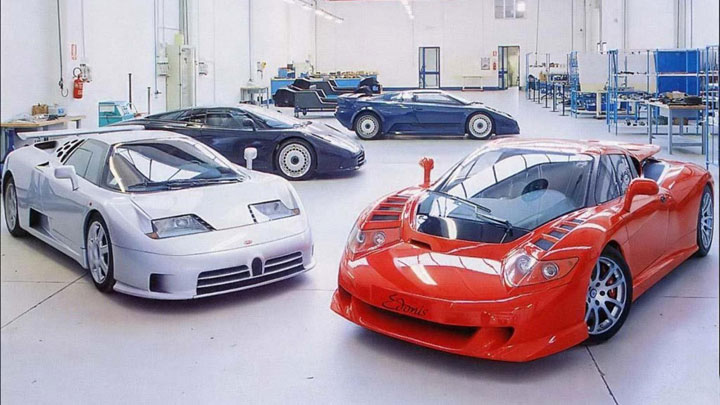 This unhappy-looking insect is the B Engineering Edonis. It was the short-lived phoenix that rose out of the Bugatti EB110’s ashes.

By the winter of 1994, things weren’t looking good for Bugatti. Debts were piling up, sales of supercars were stagnating in the recession, and the creditors were knocking on the factory gates. The company went into receivership with only 130 EB110s having made it out to owners.

After it went pop, a cluster of ex-Bugatti bods with time on their hands grouped together to not let the 17 unused chassis’ go to waste, and created this truly bonkers machine.

Its tub was related to the EB110’s, but the car around it was very different: new aluminium bodywork, new interior, and the V12 swelled: bored out from 3.5 to 3.8 liters. Then, its four small IHI turbos were swapped for two big ones. Result: 680hp. Meanwhile, the four-wheel drive system was binned, and the car was left rear-wheel drive only. The Edonis weighed in 70kg lighter than the EB110.

TG’s Paul Horrell is one of the few people on Earth who know what it’s like to uncork the Edonis and floor it. Here’s what he thought of the experience:

“I’ll never be the same again. It wasn’t the first few full-throttle second-gear bursts that did it – those times I’d just been pushed hard forward to the sound of two gigantic turbos spooling up, then come to a bend or an obstacle. It’s your classical turbo engine: a whole lot of nothing in particular until 3,500rpm, followed by a dark, fuzzy premonition that something evil this way comes.

“At 4,000rpm, come it does. The turbos spool up and I’m just… just what? Hurled? Rocketed? Catapulted? I don’t have the word. The force is shocking. A near-frantic grab into third, again that force, and for a wide-eyed moment fourth too. A metallic, uninsulated, race-car screaming of V12, a zing of turbos, and as the throttle’s released at each gearchange, the rush of opening wastegates like a dam bursting a foot behind you.”

After the McLaren F1 rewrote the supercar commandments in the mid 1990s, and Bugatti was reincarnated as a showcase for VW’s engineering prowess, the EB110 languished in the shadows of supercar history. It’s a forgotten piece of the puzzle, perhaps because it looks so weird at the front and was the most sensible high-performance creation of its era.

So, now you know. And here’s hoping that if Bugatti one day does indeed pay homage to its reclusive icon, it does the sheer craziness of the EB110 justice. 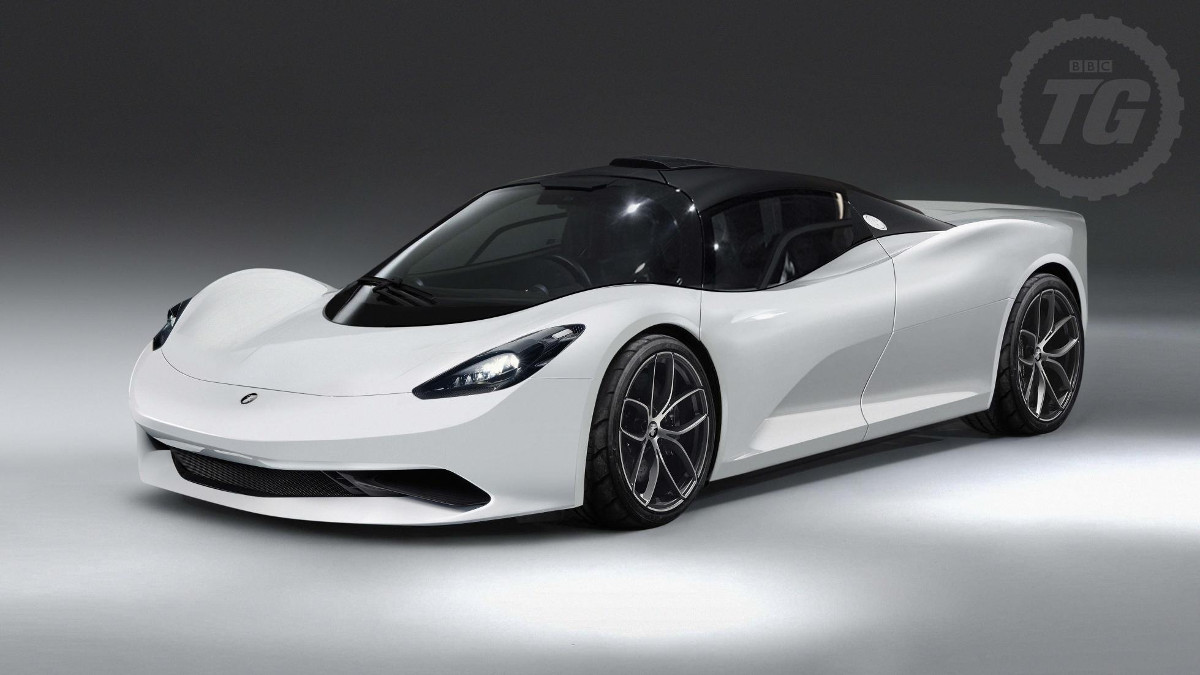 Check out these renders of Gordon Murray’s T.50 supercar
View other articles about:
Read the Story →
This article originally appeared on Topgear.com. Minor edits have been made by the TopGear.com.ph editors.
Share:
Retake this Poll
Quiz Results
Share:
Take this Quiz Again
TGP Rating:
/20