The 10 biggest celebrity car stories of 2018

See that? That’s Coco Martin promoting his new film and current entry in the Metro Manila Film Festival, Jack Em Popoy: The Puliscredibles. Of course, this being Top Gear Philippines and not a showbiz website, we’d prefer focus on the vehicle he’s riding: an Inkas Sentry Armored Personnel Carrier.

Why bring this up now? Well, because the actor and his badass 4x4 were featured in what was by far the hottest celebrity car story on our website. Cardo Dalisay topped the likes of Yassi Pressman and Kim Chiu’s Manila-proof vans, Aga Muhlach’s motorbikes, and Sofia Andres’s near-emergency in the 2018 Toyota Vios Cup.

On that note, Atoy Customs deserves a quick mention here, too. It’s as if the garage turned into Manila’s tuner for the stars overnight in 2018, transforming celebrities’ vans and SUVs into homes away from home all year round.

Want to see what other cars and personalities made a dent in show business this past year? Read on:

“We already know that the dude has a passion for big, burly off-roaders—like his intimidating, camouflage-covered Toyota FJ Cruiser and Brabus G63—but to go all out and splurge on what’s practically a tank might be a stretch for him. You can practically run over small cars with this thing.”

2) Even more of Cardo’s cool rides

Coco Martin’s garage is as impressive as celebrity car collections come in the Philippines. His toys include a badass-looking Toyota FJ Cruiser, a Ford Mustang GT, a black Toyota Land Cruiser, and of course, the armored beast mentioned above.

“As you can see, Atoy’s given Yassi the works. There’s a pair of nice leather captain’s chairs in the center, as well as a folding couch/bed and table toward the rear. There’s abundant blue ambient lighting, a sizeable television screen, and a JBL sound system in there, too—just in case Yassi feels like producing another dance video for her countless fans in the middle of traffic. Oh, and there’s a bathroom in there as well. EDSA.”

5) Aga Muhlach asks his wife for permission to ride, too

“Aga’s Instagram feed is littered with photos from his ride up to Pagudpud, featuring hashtags like #thankyoumyloveforallowingme and #wehavetokeeponthankingourwivesforallowingustorideourbikes. Yeah, we’re not entirely sure he knows how hashtags work, but he definitely gets his point across. This is one grateful man.”

“Race 2 flagged off at almost . With still three laps to go, cheering spectators spotted Race Car No. 7 crawling to the pit lane. But even before reaching the team paddock, 19-year-old actress and model Sofia Andres stopped the car, opened its door, and started vomiting on the pavement.”

“It’s a clean and classy mod job, and we wouldn’t have expected anything less from Atoy Customs. Thompson’s Fortuner now flaunts a two-tone paint finish with a white body and a glossy black roof, new housings, a front grille reminiscent of a Lexus SUV’s, and large mags courtesy of Black Rhino Wheels. Not bad at all.”

8) Young stars and their cars

“The 50- actor recently took to Instagram to show off his new ride, which he plans to use whenever he feels like he ‘wanna roll over the bulls***.’ Yikes. You might want to steer clear of Foxx the next time he wakes up on the wrong side of the bed.”

“Lee’s photos of his ride date back all the way to the earlier half of 2016 (see below), so this is definitely pre-facelift (if you couldn’t tell by the subtler foglight housings and old logo on the side). Not content with the car’s stock appearance, he’s equipped it with a more akin to his moniker: Ang Angas ng Tondo.” 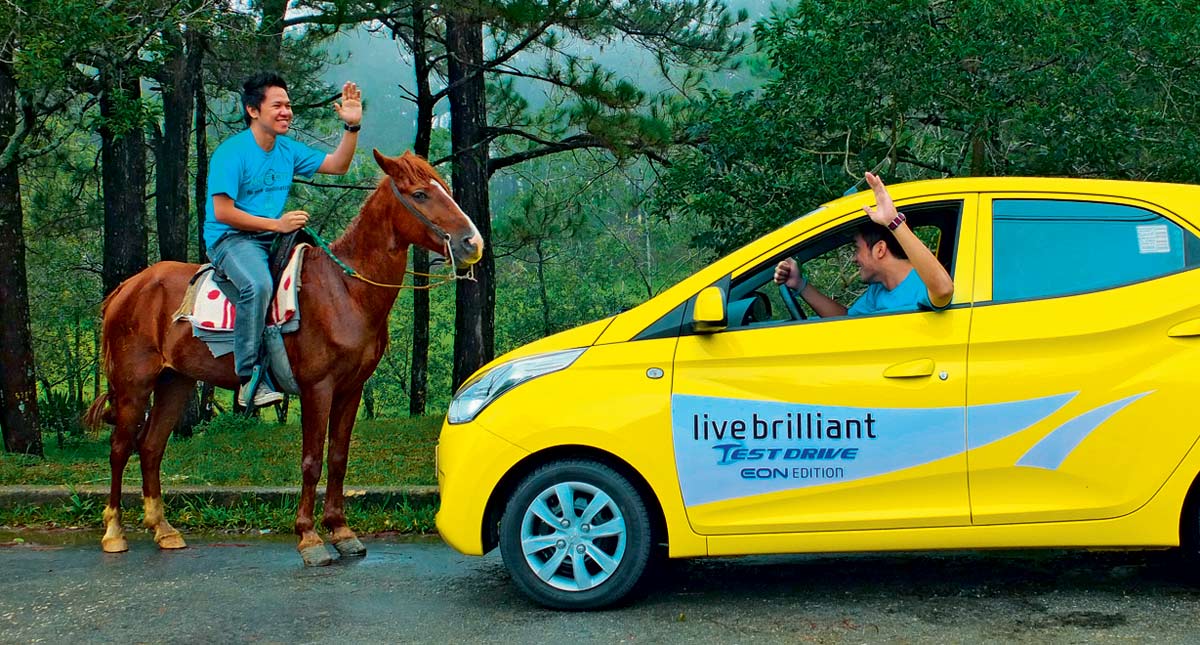 Can the Hyundai Eon handle the trek to Baguio City?
View other articles about:
Read the Story →
This article originally appeared on Topgear.com. Minor edits have been made by the TopGear.com.ph editors.
Share:
Retake this Poll
Quiz Results
Share:
Take this Quiz Again
TGP Rating:
/20