Free with every copy of the magazine
Jun 3, 2010
CAR BRANDS IN THIS ARTICLE 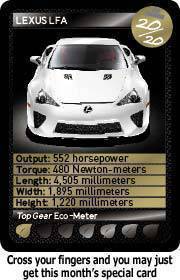 Here's for the kid in you. Top Gear Philippines is giving away a free 50-card deck of Trump Cars--yes, the popular card game many of us played when we were little rascals. But we're not giving away the entire deck in one go. Only 10 cards will be given away per month, starting with the first series that comes free with the June 2010 issue. To complete the whole deck, you need to also get Top Gear issues from July to October.

Every month, all copies shall come with the same 10-card pack, so there's no need to buy multiple copies of the same issue just to complete the set (unless you want to, of course). But to make your card-collecting a bit more fun, we're also giving away a special card per series. This special card usually features a supercar with nearly unbeatable specs. Only 500 pieces of this special card will be printed per series. There will thus be five different special cards in total.

How to play the game? We recommend five players since the complete deck includes 50 cards. Deal the cards face down to all players. Every player can only look at the top card. The dealer starts by choosing one statistic from his top card (e.g. 'horsepower' or 'TG rating') and declaring it. The others do the same, citing the same statistic. The player with the best such statistic wins the cards and chooses the next statistic.

The player who ends up with all the cards wins the game.

Simple, right? Try it with friends or your kids (if you're already a parent). We guarantee it's a great way not just to bond together but also to learn about cars. So grab a copy of Top Gear today and start collecting.

(Check out the gallery below to see what's in the first batch of Top Gear's Trump Cars.)

5 of the best racing simulator seats
View other articles about:
Read the Story →
This article originally appeared on Topgear.com. Minor edits have been made by the TopGear.com.ph editors.
Share:
Retake this Poll
Quiz Results
Share:
Take this Quiz Again
TGP Rating:
/20