More than a decade’s worth of hooning and tire-shredding
by Vijay Pattni | Dec 22, 2018

It was way back in 2008 that the Internet first got wind of a driver named Ken Block and his rather natty skills at being an absolute and utter motoring hooligan. Give this man an airfield and he’ll leave you with the smoking carcasses of many, many tires.

It was in 2008 that the bedrooms and offices of the world watched this Californian madman in ‘Gymkhana Practice,’ the first in a series of videos that would establish Block and his rally-spec motors as icons of tire-shredding excess.

We’re now up to number 10: He’s returned to your (small) screens in the latest installment of his series (called, um, Gymkhana Ten), deploying no less than five tuned motors across five countries. Shout out to the Escort Cossie, just because.

The one that started it all. Block takes his 2006 Subaru Impreza WRX STI (yeah, remember those?) with its 530hp to an airfield, guns it down the straight, and, without warning, flicks it into a massive drift. It was that first drift that changed everything. And it seems so innocent when you look back, as many of you still are: The video has gotten over 14 million views.

Shamelessly paraded as an advert showcasing DC Sports merchandise (that’s Block’s clothing line) and filmed at the Port of Los Angeles, Gymkhana Two debuted a year after the first one, and was altogether a more polished affair. It also ushered in a new iteration of the Subie: this was a 2009 WRX STI packing 566hp and 827Nm of torque, prepared by the same chaps who did the first one (Crawford Performance). It ends in an explosion, with lots of fire and lots of drifting.

Over 42 million views and counting.

There’s a mini-video that aired a few months later, too—Gymkhana 2.1, featuring Block and longtime friend Rob Dyrdek. There is Benny Hill music and ’80s synth, along with a touch of tire smoke. Just a smidgen, mind.

By this point, Ken Block had already become a household name.

We’re in 2010, and Block has swapped his Subaru for something a little smaller, but equally averse to prolonging tire life: a 2011 Ford Fiesta prepared by Olsbergs MSE. Don’t let the size fool you—it’s still packing 650hp and 894Nm of torque at the wheels, and is capable of accelerating from 0-60mph in 1.9sec. Eat that, Veyron.

He heads outside the US for the first time in a gymkhana film, at the 51-degree banked oval of Linas at l’Autodrom de Linas-Montlhery, specifically chosen by Block to challenge himself on the rather steep sides. Welcome to his ‘Ultimate Playground’. Naturally, a man in a Segway appears, and at the end, there is literally no rubber left. It’s just sparks.

We’re back in California for this one, and for the yearly installment of his tire-torture series, Block steps it up to another level of cool. Shot on the backlots of Universal Studios, the director of Zombieland produces a proper Hollywood stunt film.

There are Jaws, Back to the Future, Stars Wars, and Top Gun references, all playing second fiddle to Block’s new Hybrid Function Hoon Vehicle (HFHV). Film and car nerds, this one’s for you. Oh, and a man dressed in an ape suit riding a Segway makes the obligatory appearance.

San Francisco has been the backdrop to many a good movie, most notably the superb, superb chase sequence in Bullitt. Block decides he wanted to “have his way with San Francisco,” and boy, does he have a good ol’ day.

Shot on the actual streets of San Fran, the fifth installment of Block’s Gymkhana series landed in 2012, and remains his most accomplished and spectacular—and his personal favorite to date. In his 650hp Fiesta, he smokes his way around Northern California in a way only he knows how.

This one’s epic, and you lot are quite taken with it, too: over 54 million views. Fifty-four million.

Any car that has a ‘kill all tires’ sticker deserves to be laughed at, right? Well, laugh, and you’ll get a mouthful of the black stuff, because Block means business. So much so, he needed a different tack after the Hollywood-special Gymkhana Four and the spectacularly epic Gymkhana Five.

He went back-to-basics for Gymkhana Six, setting out a little technical circuit—with the obligatory moving cars and Segways—to showcase his impressive drifting ability. It’s a throwback to the very first gymkhana video that got the world to sit up and pay attention—it’s just him, a 650hp Fiesta ST, and a few obstacles. Oh, and a big, fat wrecking ball.

Out goes Block’s trusty little Fiesta, and in comes something altogether more unholy. A modified 845hp classic Ford Mustang with all-wheel drive and a madman at the wheel, thrashing away at downtown Los Angeles’ gritty cityscape.

It’s an incredible video, as expected, with some clever touches: donuting around Randy’s Donuts, snaking his way up into the Hollywood hills and behind the sign—the first car to have ever been filmed doing so—and a donut around a lowrider’s bouncy lowrider.

The feisty Fiesta returns for numero ocho of the Gymkhana series. But this time, the 650hp, AWD Fiesta RX3 is in a spangly reflective livery...which suits the location. For the ‘Ultimate Exotic Playground,’ Block heads to Dubai, plays with the famous fleet of police supercars, donuts around a moving Ford Raptor that’s riding on two wheels, and has a drag race against a Veyron, a Ferrari F12, a Lexus LFA, and a Lamborghini Aventador.

For this edition, Block scraps all the storytelling flim-flam and keeps it simple with slightly scary, stupidly sideways, and barely believable driving around an abandoned industrial estate.

His weapon of choice this year? Not his 845hp 1965 ‘Hoonicorn’ Mustang, or faithful 650hp Fiesta. He opts for his newly rallycross-ed 600hp, 894Nm Focus RS. The very same one he kicks up dirt with in the World Rallycross Championship.

Perhaps one of Block’s finest films to date: an exclusive, very special director’s cut of the time he took Matt LeBlanc on a very, very hot ride around London. In his monstrous, ludicrously powered Hoonicorn Mustang.

So it’s not an entry into the Gymkhana canon proper, but we’re sure you’ll agree it’s a good one. You’ll want to turn this up very, very loud. Enjoy.

“Please Hoon Responsibly” begs the disclaimer at the top of Gymkhana Ten. Right before Block’s latest tire-wrecking, laptop-speaker-slaying, extravaganza spends almost 19 minutes assaulting your senses. And not just on one airfield or in one city this time. Oh no—gymkhana has gone global.

For its 10th outing, the YouTube car-ballet phenomenon covers five locations, from snowy Sweden via Mexico to downtown LA. There’s five times the rev limiter action, five times the drifts, the jumps, and yes, the jump-drifts. 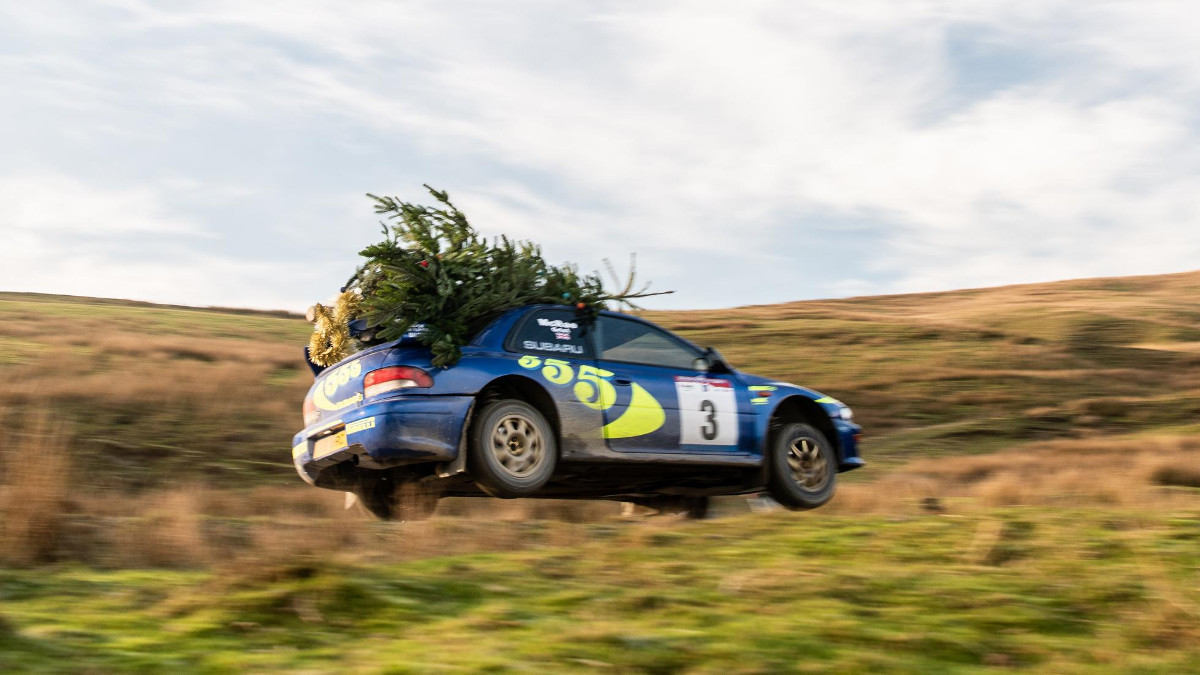