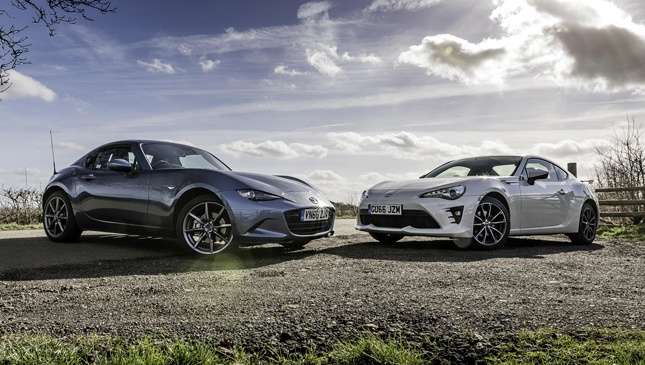 The Toyota 86 and Mazda MX-5 are both very familiar. And very similar, too. Both are unashamedly simple rear-wheel-drive sports cars, with turbo-free engines driven through manual gearboxes. Driving fun is highest of all on their agendas.

And yet they’ve never been direct rivals. The 86 is a coupe with back seats and a decent trunk. The MX-5, meanwhile, is a strict two-seater with a soft top and not much load space.

That’s until the arrival of the MX-5 RF , the rather nicely proportioned car you see left of shot. It is, effectively, an MX-5 coupe. There’s no more practicality than before, but its stiffer structure and hard top seem to be treading on the Toyota’s toes at last. 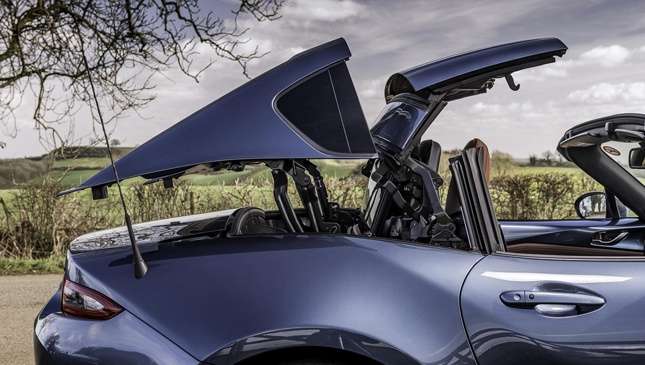 The roof still folds, though. Think of it as a three-quarter scale Porsche 911 Targa, with a similarly theatrical roof mechanism. The whole rear panel lifts up, back pillars, and mock rear windows included.

While it’s aloft, the roof concertinas into a space above the trunk, before the panel returns into position. It’s a way to impress onlookers, but given you have to hold the interior button down—and it can’t be operated from the key fob—the driver doesn’t get to enjoy the fun.

The whole process takes 13 seconds. And given its complexity and the aero effect of propping half the rear end up in the air, it can only be operated below 10kph. Which basically means you need to pull over and do it standing still. 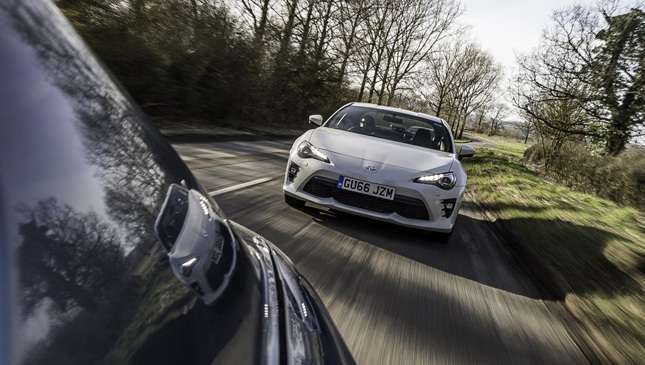 The Toyota, naturally, offers no such tricks. The bulk of your money seemingly goes into all the stuff you can’t see: the suspension, brakes, and chassis components that make this one of the most easily enjoyed cars below P2 million.

This has been the case since the 86 arrived in 2012, and while the car was met with almost universal praise—including TG's own Car of the Year award—it remains a niche choice in a very style-led part of the car market.

Buying a car where all the cool stuff is concealed isn’t the best way of demonstrating your personality or how much you get paid, it would seem. 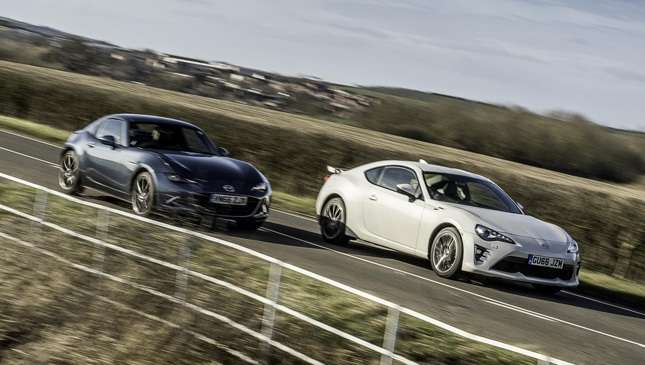 The reality is that you just nail the 86 at any given opportunity. It revs right up to 7,500rpm and it’s fun doing so, even if the engine lacks the aural excitement you really crave. The gap in mid-range torque isn’t as profound, thanks to how swiftly the 2.0-liter flat-four engine revs.

Toyota claims 0-100kph takes 7.6 seconds, though arguably that sounds a little modest when you’re actually driving the thing. We didn’t strap any timing equipment to it, but there’s a sense of urgency here that’s more tangible than any on-paper stats ever can be. It is, if you aren’t already aware, a reasonably fast car… 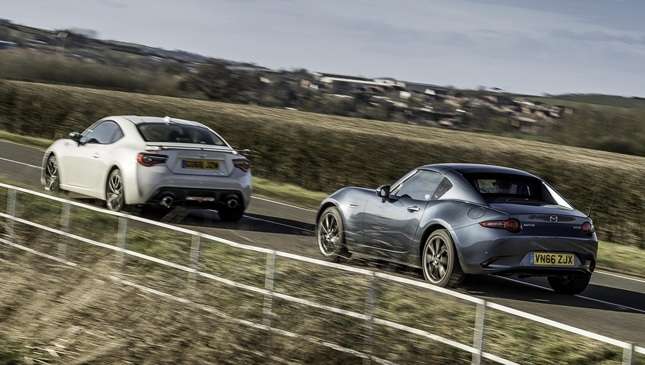 If you’re into nerdy things like rev-matching it has the more precise throttle for it, too. Both of these cars are out to prove that power isn’t everything in a sports car. And it’s the least powerful of the pair that best punches above its weight. 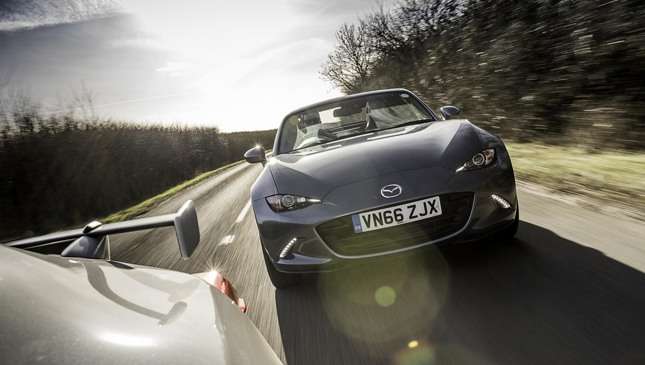 The eagerness of its accelerator doesn’t quite course through the rest of its dynamics, though. The steering wheel is large and controls a system that’s too light for a sports car, and too short on information.

Instead, the MX-5 communicates through body movements. It’s high-riding by sports car standards, and if you approach a corner with speed it rolls around before doing anything else. 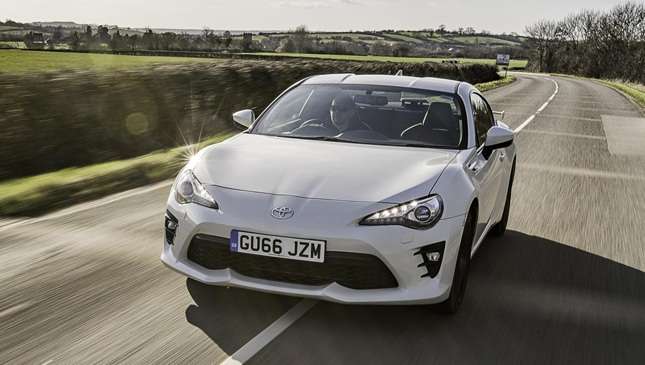 The Toyota is immediately a more serious proposition. The steering deserves a lot of praise; the wheel is tiny (smaller than before in this 2017 facelift car), its weighting perfect and the stream of information impressive. Compare it to a performance car from even five years ago and I’m sure it’d feel light, but in a world of electronic power steering, it’s good. Very good.

Which is what you want with such a lively chassis beneath you. Toyota still fits distinctly ungrippy tires to the 86, all with the aim of making this a minor drift hero. The result is that you can have your hands full, especially when the road is wet. But it’s rarely knife-edge stuff, because both your hands and your butt (which sits very close to the floor) know everything that’s going on beneath. 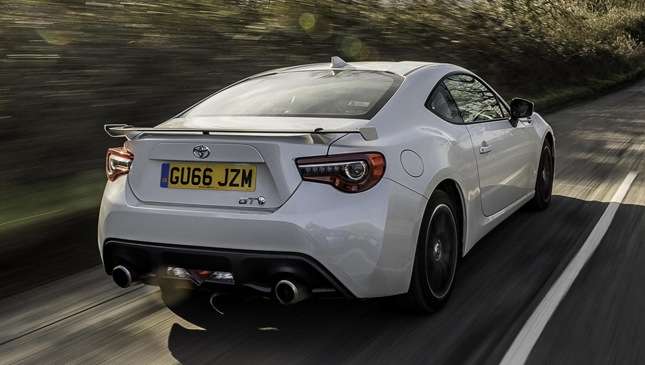 You probably wouldn’t want a sharper accelerator pedal given how lively the rear axle can be. What you have here is a car whose power and grip match each other expertly. Fit better tires and you’d only end up wanting to up the engine output.

It is evidently the car of this pair that cares more about driving. Toyota has fitted numerous modes to the stability control, for instance, with an intermediate track mode between ‘on’ and ‘off.’

But as much as this car is famed for its ability to slide, that’s not how most people drive. And just below its grip limit this is a finely balanced car, and a prime example of how inherently right a front-engine, rear-drive setup can feel; feeding enough power to the rear axle to settle the car into a corner and power it out, at that sweet spot just below the skids. 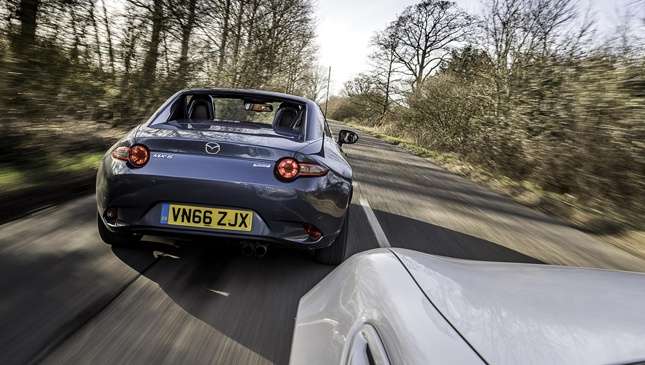 But you need to be smooth with the 86, and it chastises clumsy inputs by reacting in a clumsy way. The MX-5, in comparison, welcomes in novices and smooths over their rough edges. Both of these cars have wonderful six-speed manual gearboxes, but the Mazda’s is just that little bit easier to operate, and there’s more grip to handle greedier accelerator use.

It also has its trick card in this test: the ability to stow the roof and heighten your sensations with fresh air rather than razor dynamics. Thing is, I think the MX-5 soft-top does a better job of this.

No doubt, the MX-5 RF is a fine-looking thing. Its proportions and stance outdo the Roadster. But the MX-5 has always prided itself in simplicity, and the ability to flip the roof up and down with your left arm, in seconds, is hugely appealing.

Having to pull over to convert the RF means—facing a two-hour drive with a highway stint in the middle—it’s all too easy to keep the roof up if you don’t know what the weather’s going to be doing. No one wants to be stuck getting wet while on a long trip. 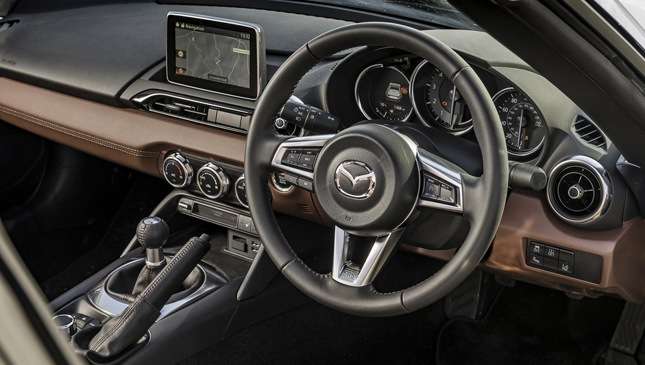 It does have the smarter interior, mind you. With all of your musical and navigational needs taken care of by an easy-to-operate touchscreen, the rest of the dashboard is nicely uncluttered. Three big, round dials make the A/C a breeze to operate, too.

The seat is too high for a sports car and the steering wheel doesn’t stretch out far enough. In fact, it doesn’t adjust for reach at all, which feels like a big oversight in a driver-focused car.

But a big central rev counter and some expertly spaced pedals mean there’s plenty of good news inside. Just make sure you like your passenger, for you’ll be at very close quarters with them… 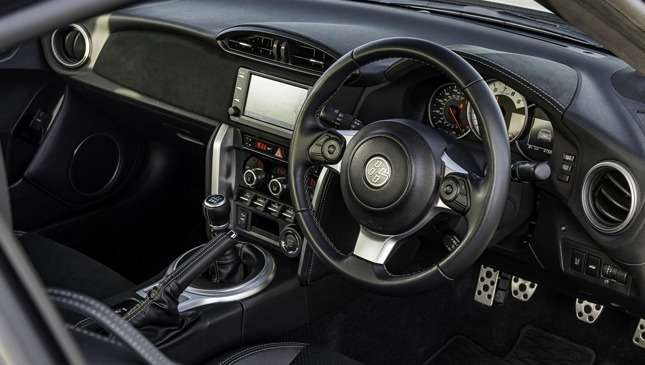 The Toyota’s status as the driving geek’s choice is certified by the interior. The seat cranks very low, is more supportive than the Mazda’s, and you can pull the wheel right towards your chest. Your legs stretch out more horizontally than in the MX-5.

Again, there’s a nice central rev counter, and there’s lots of tactile Alcantara. Though none on the wheel, oddly, which feels like a missed opportunity.

On the upside, there are back seats in here. And if you’re below five-foot-ten, and sitting behind someone of the same height, you’ll have just enough room for a short journey. Kids will be absolutely fine back there. 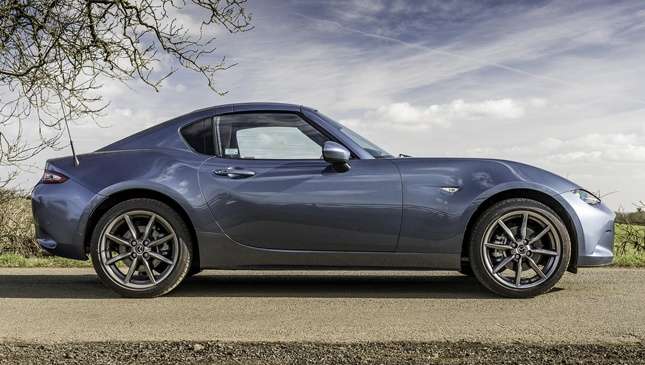 Neither car here is perfect. But both are evidently very enjoyable ways to spend your money. If you want a car that looks like nothing else on sale, and comes with a folding roof that’s a party piece as well as something to enjoy on warm days, the MX-5 will appeal most.

A car that’s huge fun to drive in isolation is made to look a bit soft around the edges by the Toyota, but its naturally aspirated engine relishes being thrashed and you’ll find one of the finer manual gear changes on sale between you and your passenger. There’s lots to like here. 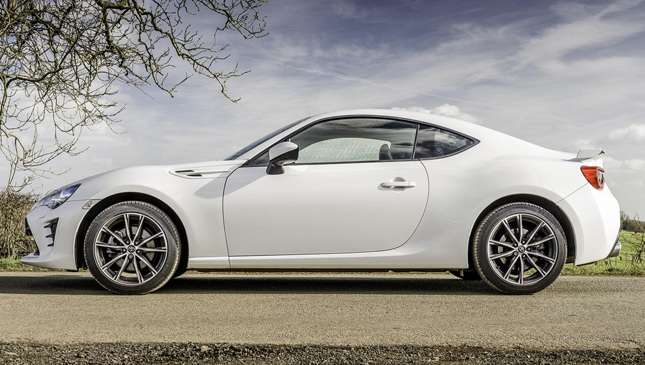 But the most exciting and downright addictive car to drive is the Toyota 86. You’ll be shunning style by picking this one—its design is only a few small tweaks away from being five years old, and the interior is hardly classy—but who cares, when what lies beneath is so fulfilling?

Some may think it should be more powerful, and it’s still not exciting enough to listen to. If either offend you, they’re both a few cheap modifications away from being fixed. What you won’t feel like touching is the chassis, which feels expertly set up right out of the box. It’s reasonably fast, the Toyota 86, but it’s very good fun. 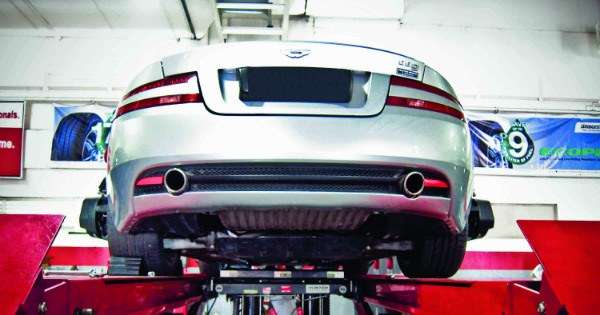 How to do a proper wheel alignment
View other articles about:
Read the Story →
This article originally appeared on Topgear.com. Minor edits have been made by the TopGear.com.ph editors.
Share:
Retake this Poll
Quiz Results
Share:
Take this Quiz Again
TGP Rating:
/20