The new Mitsubishi Strada is armed for the pickup wars 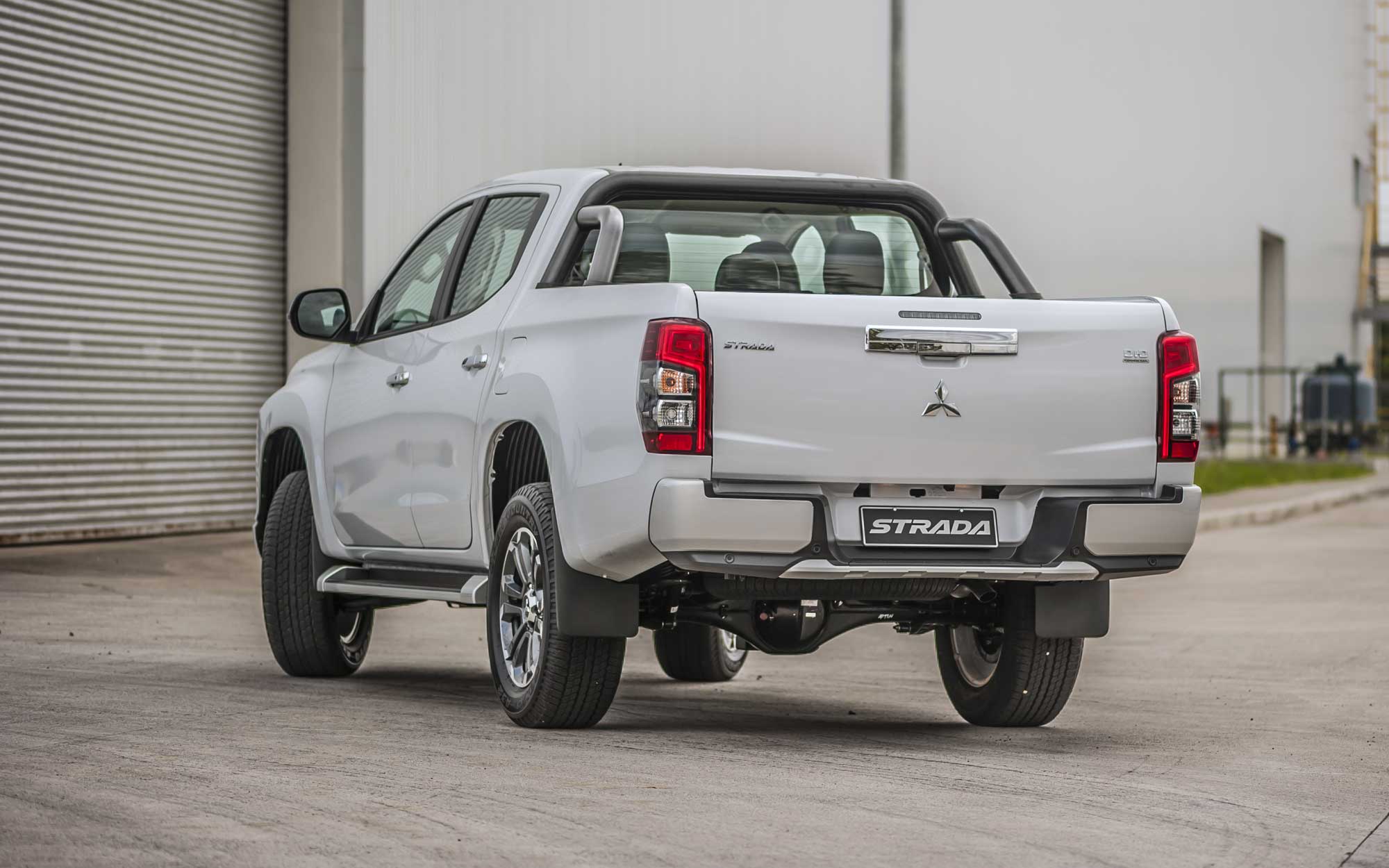 ‘This one comes loaded to bear, and then some’

It’s rather intimidating walking into the Mitsubishi plant for the first time. I haven’t been here since the old tenant of the compound moved out, and I’m still trying to get my bearings. I’m walking past rows and rows of brand-new Mirages, up to the towering new stamping plant that churns out body panels for these tiny little cars. It’s a long walk from the gate, where I’ve had to leave my car and my camera, and I’m starting to sweat. I finally round the corner of the plant and see the Strada sitting near the back entrance, with electric forklifts buzzing back and forth around it.

I know what to expect, seeing as how the Montero Sport already debuted the Dynamic Shield look three years ago. But it’s still impressive. The Strada mixes features from the Montero Sport and the Xpander, with the same headlights as the former and the big, prominent light boxes mounted high up on the bumper. On the Xpander, those are headlights. Here, turn signals and foglights. The Strada also gains the same Pajero-inspired square fenders as the Montero Sport, and a tamer variant of the teardrop taillight on its midsize-SUV stablemate.

It’s a big improvement in road presence. Perhaps Mitsubishi was simply testing the waters with the Dynamic Shield design on the Montero Sport before applying it to its other trucks, but the previous Strada’s awkward front end—combining a garish chrome grille with the sleek spaceship-like nose of the 2005 Strada—didn’t go well with the boxier lines of the new body. This one feels much more cohesive and much more handsome.

As opposed to the drastically upgraded exterior, there are no big surprises inside. Apart from a new four-spoke steering wheel, also à la Montero Sport, the interior is largely similar to that of the outgoing car. The new contrast-stitched leather on the seats and the door panels is nice, but that’s about it for major cabin changes. That said, there has never been much wrong with the interior, which is spacious, comfortable, and quite modern. The J-line cab, introduced way back in 2005, remains a unique feature of the Strada, giving it generous rear-seat room despite the short 3,000 mm wheelbase.

There are also no big surprises in the way the Strada drives—which is to say, it drives very well, thank you. The suspension feels firmer than the Montero Sport’s, with better body control, but it never feels as flinty or crashy as other pickups tend to. I can’t quite detect the effects of the new larger-diameter rear shock absorbers from the driver’s seat. Benefits here will more likely be felt off-road or with a full bed of cargo, as the bigger fluid reservoir provides more consistent damping.

Cornering feels flat and surefooted, and braking is strong and sure. Where the old braking system was on the spongy side, this new setup provides instant response and much better pedal feel. That dual piston setup should also provide better brake wear, as the brake pads bite into the disc more evenly than with single-piston brakes.

The decision to stick with hydraulic power steering pays off with great steering feel compared with other trucks. Light steering effort, on the other hand, makes for breezy parking. The tight turning circle, courtesy of the short wheelbase, helps there, too. Executive editor Dinzo Tabamo reports that even the clutch and the shifter are light and easy to use, based on his pre-launch drive in Thailand. A far cry from the sometimes-tiresome manual transmission on older 2.5-liter Stradas.

This top-of-the-line 4x4 GT, however, only comes with the new six-speed automatic. Yes, that’s two gears less than the eight-speed in the Montero Sport, but the Montero Sport’s heavier transmission would likely hurt cargo capacity and fuel economy, all for some minor gains in refinement. On the lighter Strada, the six-speed feels just right, with closer gear spacing than the old five-speed, whose long gearing didn’t flatter the engine. With the new transmission, the latest Strada finally feels a step above the old 2.5-liter model in terms of acceleration, and comfortably in the top half of the class of 2019 in terms of performance. Sure, there are trucks that are more rugged or more powerful, but few that are as easy and relaxing to drive.

Aside from this, the GT gets a four-wheel-drive system controlled via a Super Select rotary dial. Aside from the regular two-high/four-high and four-low modes, it allows you to toggle the locking center differential as well as to tailor the drivetrain, stability control, and braking behavior through a selection of off-road modes such as Gravel, Sand, Rock, and Snow. Can’t say much about them yet, but I expect they’ll be rather useful for those who like to play in the mud.

For those of us who prefer to play on the pavement, the Strada features a bunch of other safety systems, including cross-traffic alert, blind-spot alert, and an optical Forward Collision Mitigation system that helps prevent accidents at highway speeds. The clunkily named Ultrasonic Misacceleration Mitigation System, on the other hand, uses the front and rear parking sensors to prevent you from lurching into walls or other cars when you slam on the accelerator while parked. And no, it’s not a PH-only feature. Mitsubishi has rolled it out in Europe and the rest of Asia as well.

Other niceties include seven airbags, electric power seats, multiple power and charging points—including two 2.1-ampere quick-charging USB sockets for the backseat—and a ceiling-mounted air-vent system. Mitsubishi is careful to clarify that this is not actually an independent air-conditioner, as you might find on AUVs or SUVs, but it’s a unique feature for this class.

The Strada will come in several variants. At the bottom, you have the P1.165-million GLX Plus, so named because it offers more than the old GLX in terms of creature comforts. And at the top, you have the P1.67-million GT 4WD we’re driving here. Base variants for the old model will be carried over, simply because the new brakes will not fit under the smaller wheels used on fleet units. No, the smallest wheels that will fit are the 17-inch alloys on the GLX Plus. If you feel the need for more bling, you will want the GT, with its 18-inch wheels shod in tremendous 265/60 R18 Toyo Open Country road tires, rather than the mixed-terrain tires you’d expect of a 4WD model. Good choice. They provide much better performance and comfort on-road, and anyone who’s looking at going off-road will most likely be changing tires, anyway.

Alas, we aren’t going off-road today. After a few laps around the plant, and a few more along the Laguna Technopark’s wide, quiet avenues, it’s time to park the truck and pack away our gear. The new Strada looks impressive sitting there, jutting out over a sea of shiny Mirages. I can’t help but feel that it will be a hit with buyers. The previous model was a great truck, but it was hobbled by some rather unfortunate styling and packaging decisions. This one comes loaded to bear, and then some. It finally brings the Montero Sport’s brash sense of style and high-tech loadout to the pickup wars. Granted, this is how the Strada should have been packaged in the first place, but in this case, it’s better late than never. 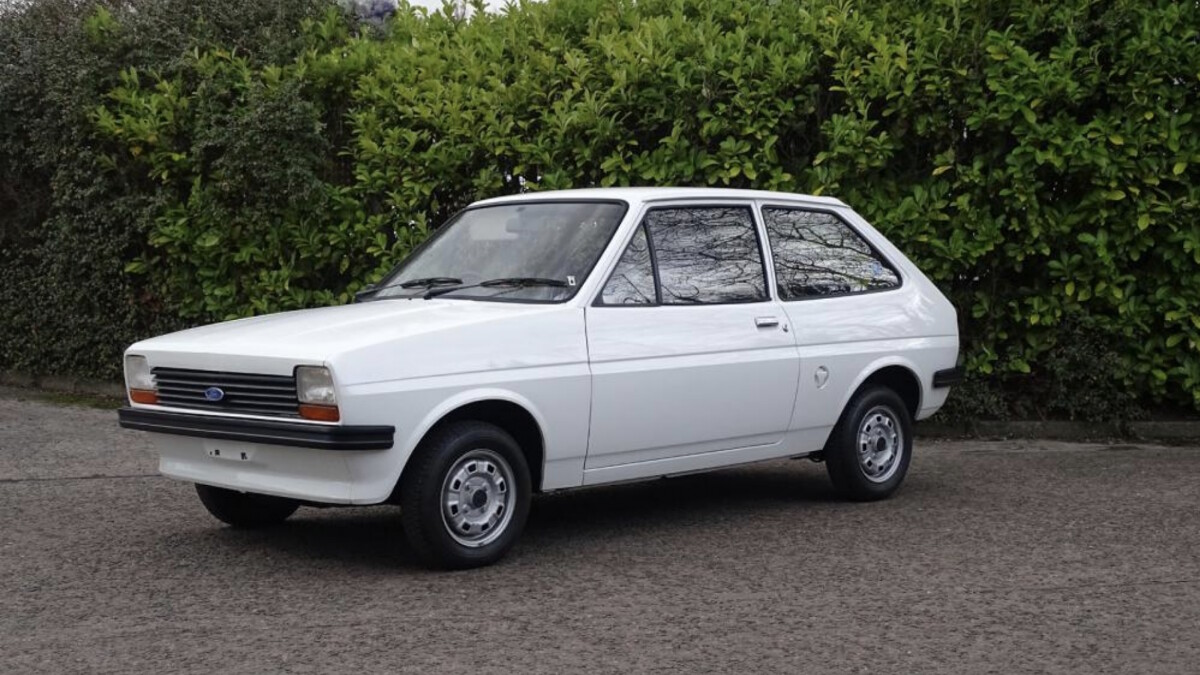 PM sent: A good-as-new, 40-year-old Ford Fiesta
View other articles about:
Read the Story →
This article originally appeared on Topgear.com. Minor edits have been made by the TopGear.com.ph editors.
Share:
Retake this Poll
Quiz Results
Share:
Take this Quiz Again
TGP Rating:
/20