Ralliart returns to rally: What does it take to revive a legend? 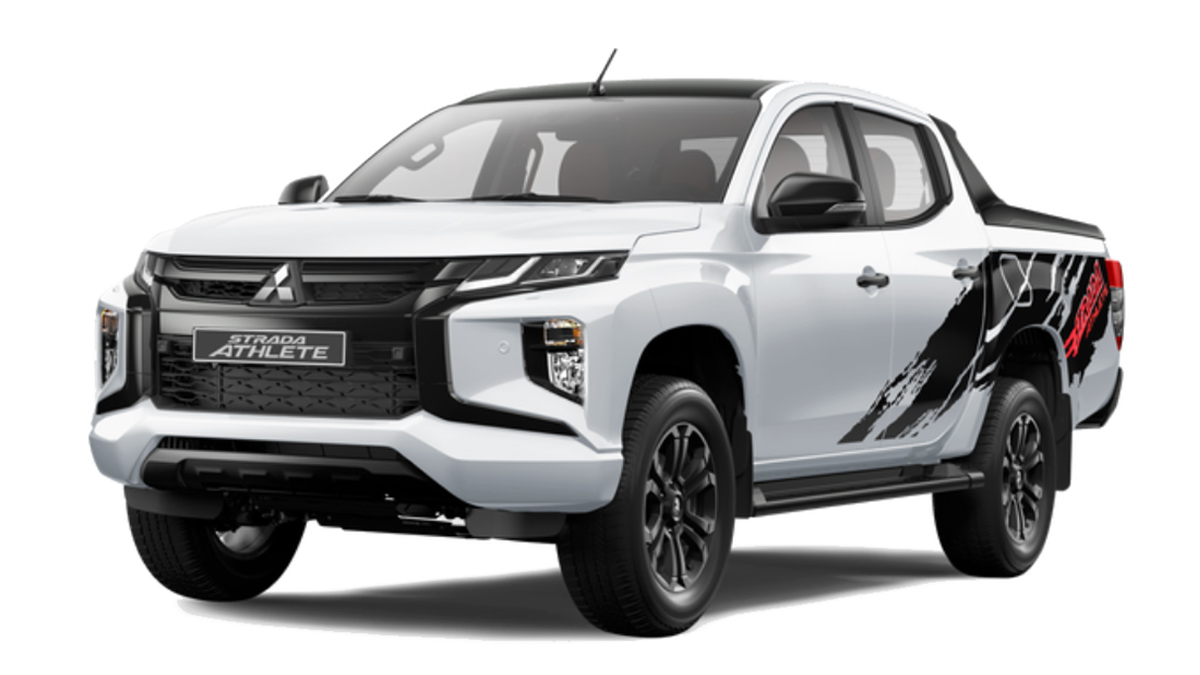 There are sleepy towns, but a place like Buriram can have you dozing off with the ferocity of a mid-afternoon caffeine crash. The quaint locale, situated in northeast Thailand, is home to 25,000 citizens who mill about between low-rise buildings separated by long stretches of empty roads.

But Buriram isn’t without its charms. Its historical shrines are a sight to behold, and it has become a home for sporting success. The local Buriram United Football Club is a powerhouse in national and regional competitions. The town has also become a motorsports hub, and is the jumping off point for the Asia Cross Country Rally (AXCR) 2022.

Once upon a dirt road and back again 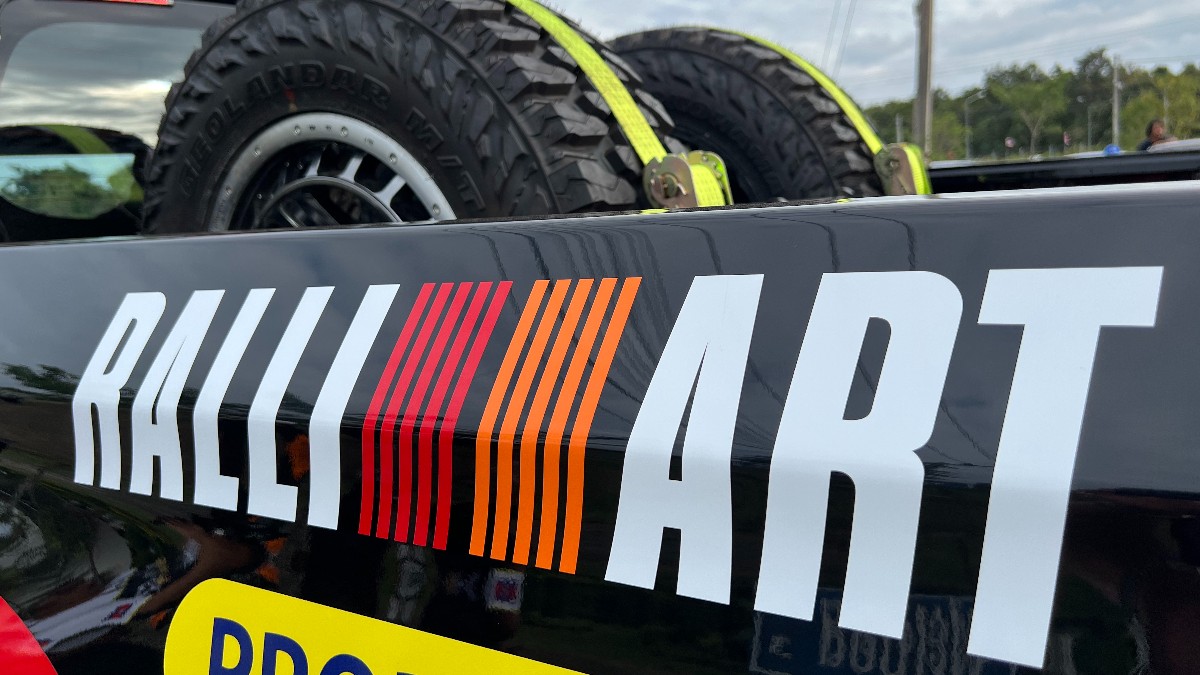 There are some words so synonymous with each other that you seldom mention one without the other. Work and stress. Rice and extra. EDSA and traffic.

A lifetime ago, Mitsubishi and rally were the palaman and pandesal of the automotive world. Wherever the Japanese carmaker went, discussions of its achievements on the dirt track were never far behind. And the names that braved those races—Colt, Lancer, Galant, Pajero—became legends as consumer models in part due to those podium finishes. There was even a time when the Lancer Evo competed for bedroom poster space against Italian supercars.

Mitsubishi dominated at the World Rally Championship (WRC) and Dakar Rally for decades. And aside from the famed three-diamond badge, there was another logo that took up real estate on those cars: Ralliart. Just as names like Nismo and BMW M elicit giddy cheers from even the most hardened gearheads today, a Ralliart decal once meant that a car was capable of great things.

But as times changed, Mitsubishi shifted its efforts towards other pursuits. Ralliart disappeared from the grids it once conquered, and with that came the recent reputation that Mitsubishis were little more than frumpy, slushy people movers.

Last year, Mitsubishi announced that its Ralliart division would be returning.

“For customers who wish to experience our Mitsubishi-ness, we will launch custom-made accessories for our model lineup as well as re-entering motorsport events around the world,” announced company CEO Takao Kato.

AXCR 2022, a 1,700km, six-day race across Thailand and Cambodia, is the first major motorsports foray for the resurrected Ralliart.

To revive a legend, you first need…a legend 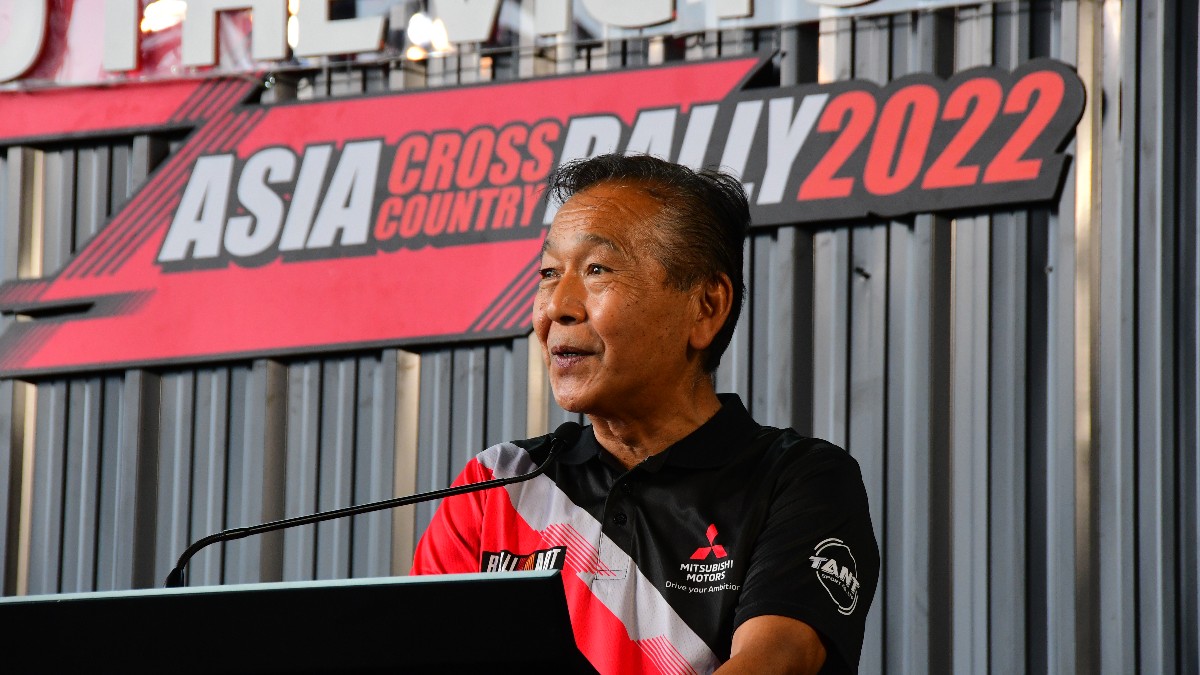 Hiroshi Masuoka’s graying temples hint at the wisdom hidden within his 62-year-old frame. But the two-time Dakar Rally champion and Team Mitsubishi Ralliart race director is no feeble college professor lecturing from a blackboard.

If you’ve visited one of Mitsubishi Motor Philippines’ (MMPC) Montero Sport or Strada launches in recent years, then there’s a good chance you would have spotted this man thrashing about on a dirt course with some excited passengers in tow. If you’ve been lucky enough to experience it, one thing becomes clear—from his grip of the steering wheel to his never-wavering focus, this is a man whose blood chemistry exam would turn up traces of desert sand.

“To lead the team to victory as team director, I have drawn on my rallying know-how and experience, built the team organization, and worked to hone our cars,” Masuoka said in the lead up.

His racers know this all too well. During a pre-race press conference, he quips that if his drivers underperform this year, he would don the overalls himself and lead from the front for the next go-around. His drivers chuckle, but perhaps deep down they know the humor is half-meant. This aging professor is Yoda, revered for past conquests yet ever ready to kick ass and take names should the need arise.

A face for the masses 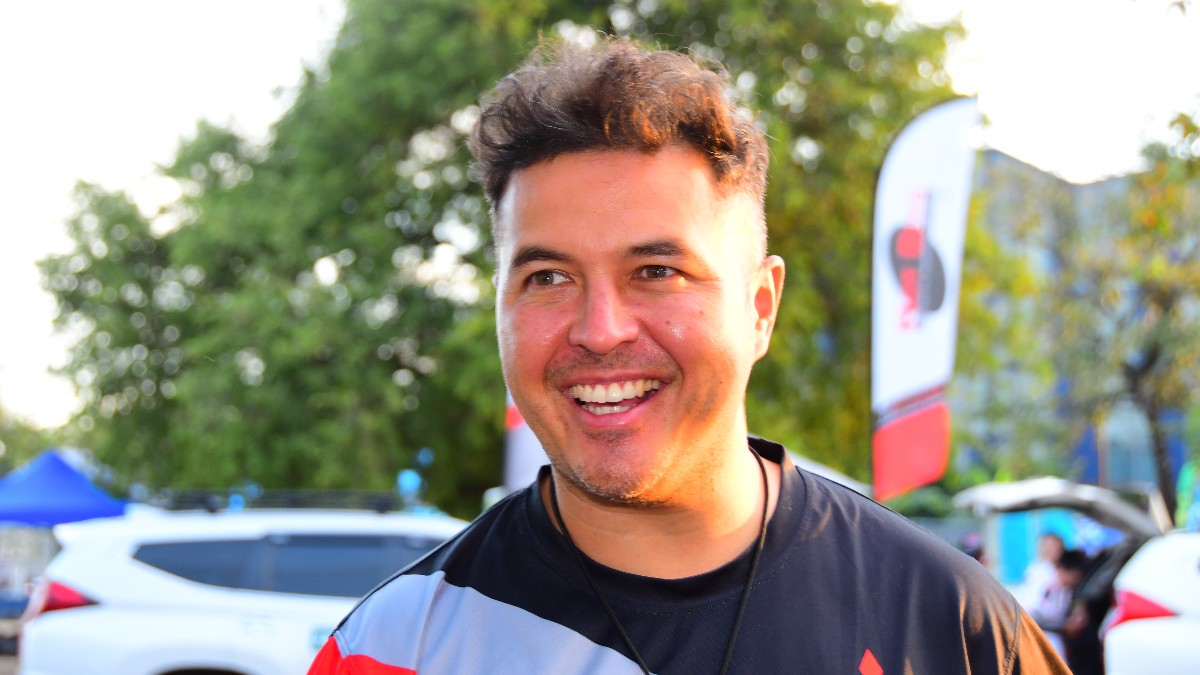 Racing might be a helmeted pursuit, but the faces behind the wheel can and do become household names. In this group, one person sticks out as the next potential mug shot for Ralliart.

Masuoka said of his charge prior to the race: “Rifat has lots of experience in sprint rallying, so if we do a good job as a team to manage the long-distance aspect of a cross-country rally, he will deliver a great performance.”

The fair-skinned 43-year-old—who quips to one reporter that hunger won’t be a problem during the race on account of his first name—isn’t lacking in the charisma department, either. But he is a racer to his core, and a Mitsusbishi fanboy at heart.

“As a child, I always put my dreams as big as possible. And one of my biggest dreams is being part of the Ralliart team. Ralliart has always been part of my life, and now I am catching up my dream,” he shares.

The right vehicle for the job 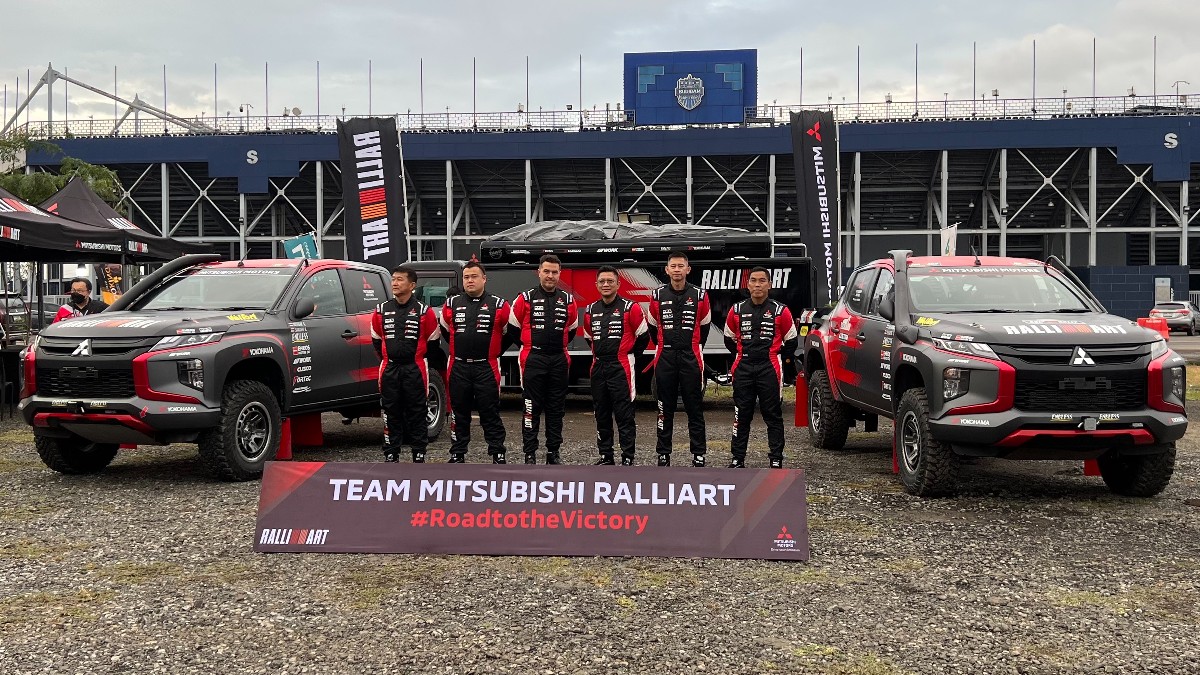 So, which of Mitsubishi’s models is ripe for the rallying stage? Which one captures that essence of ‘Mitsubishi-ness’ the brand wants to showcase?

Let’s see. The Pajero, the Galant, and the Lancer have since been put out to pasture. The Colt was brought back from the dead, but as a Renault-built compact. The Mirage? That has actually been put to rally use in Sweden, but it hardly captures the badassery Mitsubishi wants to flex.

How about something newer like the Xpander? Now that has potential, especially since Sungkar raced it to victory in Indonesia. But no. A major comeback like this calls for something bigger. Bolder.

For this race, Mitsubishi has slapped the Ralliart decals on the Strada, or the Triton as it’s known in Thailand. The Japanese manufacturer fitted the pickup with a slightly tuned 2.4-liter MIVEC turbodiesel, a lighter hood and doors, a roll cage, and under guards. Compared to the other cars on the grid, the changes here are minimal. Save for the roll cage and towing accessories, the units could almost pass muster for a showroom display.

The reason—at least by my estimation— boils down to marketing. What good is hyping up your rally-bred pickup if it looks nothing like the ones customers see on the road? Even the legendary Evo models that Tommi Makinen made famous in his four WRC victories could be purchased for the right budget. And you can bet your spec-sheet that these rally enhancements will soon find their way in some form to your nearest dealership.

“Our DNA belongs to rally sports. Now it’s good timing to come back to rally sports because we are focused on pickup and SUV technologies. So we would like to brush up our technology for the future,” explains Takanobu Suzuki, MMPC executive vice president for sales and marketing. 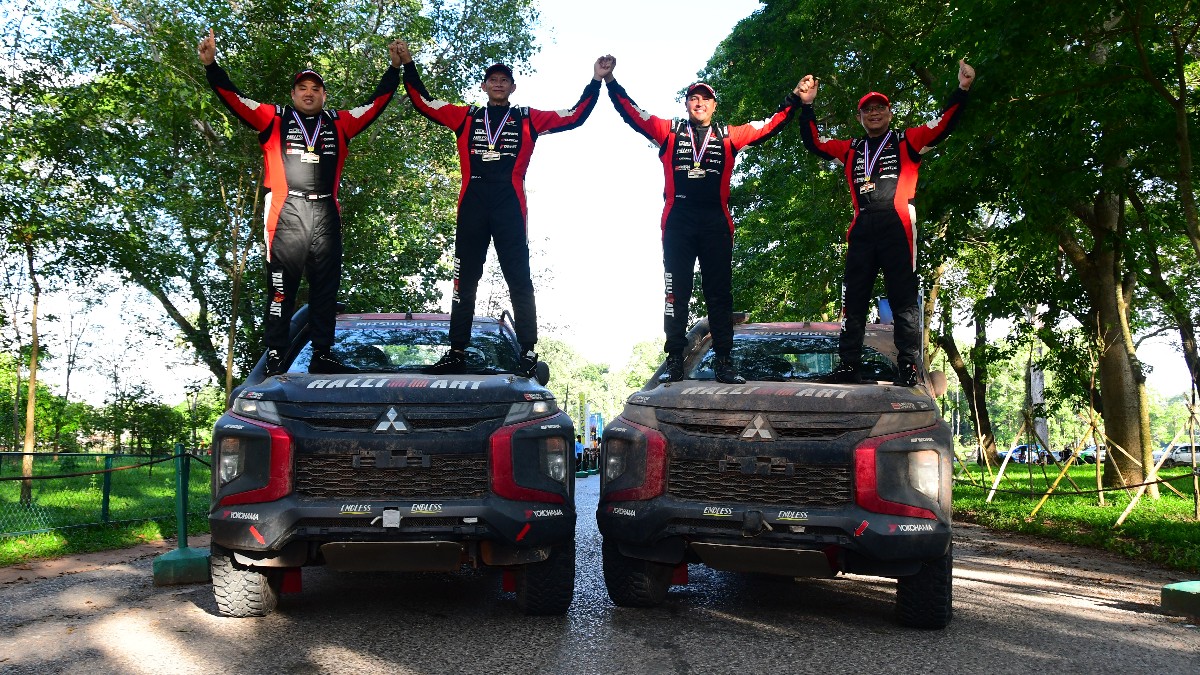 Did Mitsubishi get it right by putting a rally legend at the helm, hiring a marketable driver, and keeping its race cars looking mostly stock? If you believe that results speak for themselves, then the answer is a resounding yes.

“This was our first attempt to return to the motorsports scene under the name of Ralliart, and it was a very important rally for Mitsubishi Motors. I thought that it would be good enough for us to finish in upper rankings, but I am very happy that the team have taken an overall victory,” Masuoka remarks.

This not only means a good start for Ralliart 2.0, but it sets a high benchmark for future endeavors. Will we see Mitsubishi take the podium again at WRC and Dakar in another historic run? We might. And if we do, we can all look back at how the legacy started in the dreary backwoods of rural Southeast Asia. 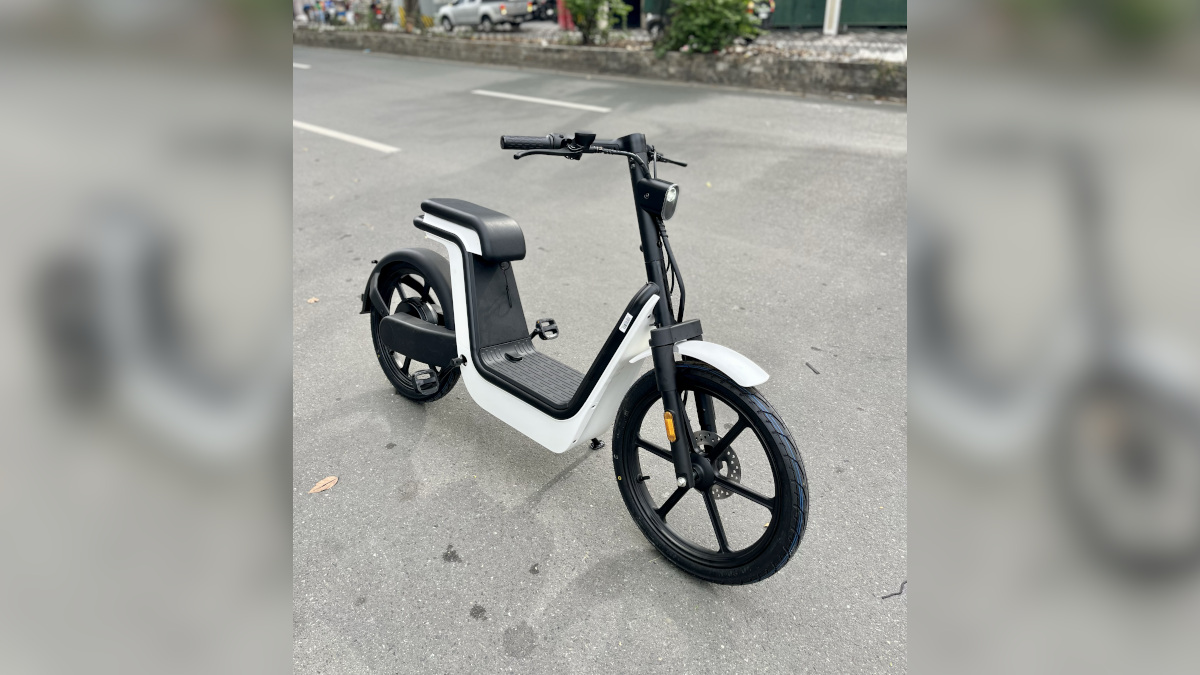 This sleek Muji x Honda ebike is now in PH with an P89,998 price tag
View other articles about:
Recommended Videos
Read the Story →
This article originally appeared on Topgear.com. Minor edits have been made by the TopGear.com.ph editors.
Share:
Retake this Poll
Quiz Results
Share:
Take this Quiz Again
TGP Rating:
/20