How owning a sports car cured my need for speed

Because there's more to driving than being fast
by Paulo Rafael Subido | Jan 25, 2018
CAR BRANDS IN THIS ARTICLE 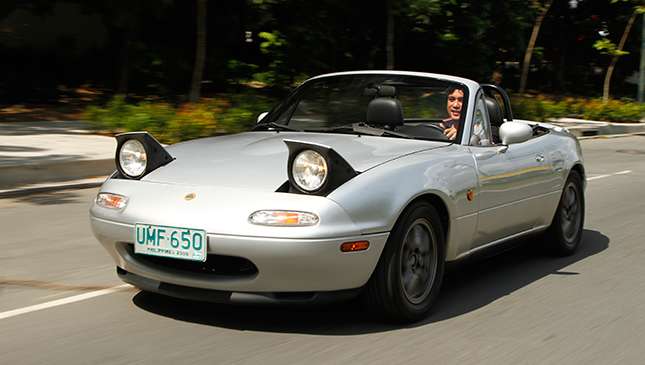 I was a smoker for 14 years. The memories of this pastime still linger today. I will never forget waking up every morning in a foggy haze, groggily walking to the kitchen to prepare a cup of coffee, and while still half asleep, making my way to the balcony, extracting a crooked cigarette from a crumpled soft pack (a leftover from the previous night out), resting it gently on my lips, and then slowly yet deliberately sparking a lighter and bringing the tiny flame closer to my face.

That ritual leading up to the first drag of the day—a long, slow draw—was what snapped me out of autopilot. The satisfying sensation of my lungs filling with smoke, punctuated by an equally protracted exhale into the chilly Baguio morning air, was bliss.

Smoking never really taught me any lessons except for this one: Don’t ever rush your damn cigarette. There’s no enjoyment in a life-threatening and money-burning activity if you don’t let the world turn without you for a moment. A cigarette rushed is a cigarette wasted.

I have since kicked the habit and have not had a single puff in the past seven years. However, there’s still one addiction that I never got to shake, and it’s my love for driving. Unlike smoking—which will only result in some horrible form of cancer—holding a steering wheel, working three pedals, rowing through the gears, and carving motion through time and space, has led me on a very interesting and fulfilling journey.

Driving as a pursuit has never failed me. I’ve built a career around being a car enthusiast, and I have my hometown Baguio and my Camp 7, Kennon Road address to thank for that. Its winding roads were the ideal setting for a car-crazy kid to grow up in. The mountain’s smooth black asphalt called out to me and pushed me to not just drive—but to drive well.

I honed my skills little by little, learning the art form by reading books, devouring car magazines, and riding shotgun with my race car driver friends who were willing to share their knowledge with me. Countless trips back and forth between Baguio and Manila in the middle of the night to alleviate my constant homesickness during my college days helped, too.

The thickest fog or the hardest rainfall was never enough to stop me. I’ve lost track of how many kilometers I’ve logged in my lifetime, but the highlight of the drive to my mountain home was always the hillclimb up Kennon Road, Marcos Highway, or Naguilian Road.

With this amount of seat time and exposure came the desire to be quick. It was only natural, especially when a favorite topic in my barkada would be about how many hours each journey took, or the personal best from checkpoint to checkpoint on Kennon Road. There was always an element of braggadocio of course, but the serious drivers among us knew that if there’s a real speed itch that needed scratching, the proper place to do it would be in a sanctioned motorsports event. Pardon my humble-bragging, but I even have a handful of championship trophies from amateur driving competitions displayed in a special shelf in my room. I will treasure these for the rest of my life.

Working at Top Gear PH has given me the chance to drive some really fast and exotic machinery, too. Exercising self-control when handed the keys to a Ferrari 488 Spyder (660hp, 760Nm), Aston Martin Vanquish (568hp, 630Nm), and Nissan GT-R (562hp, 637Nm) among others, was never a problem.

I know my capabilities as a driver, and am fully aware that even trying to reach the limits of these cars can get me into really big trouble. But even with proper restraint, these machines are blindingly fast. However, the mad dash from a zero to 100kph (and beyond) is over as soon as it’s begun. Still, the rush that came from being propelled by brute force can get you hooked. 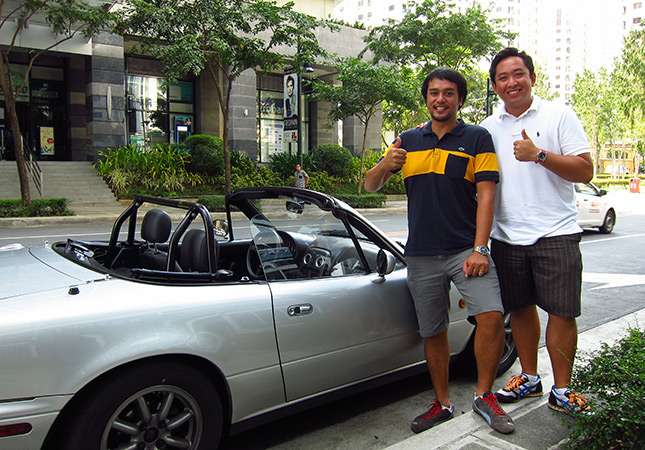 But things started to change when my hunt for a first-generation Mazda Miata ended. The initial reason why I lusted after a roadster in the first place was my lifelong desire to own a convertible. The whole ‘infinite headroom’ thing and being exposed to the elements was a huge deal for me. But each passing day of ownership has been a transformative experience. The mystique of the MX-5 runs so much deeper than feeling the wind in my hair.

There’s a lead-up to before I drive it (which is pretty much every day) and this series of events has become ritual. During the elevator ride down to the basement parking lot of my building I’m already holding the key in my pocket in anticipation. As I walk toward the parking space where my silver-hued MX-5 is resting, I’m admiring it from afar. Its soft and simple curves, 14in Black Racing banana-type alloy wheels, and low ride height look so good to me. I have not altered a single thing on this car for fear of messing with perfection. Previous owner Carlo Ablaza’s signature style will always remain.

I open the door for my wife Esay first and help her in, and as I walk around the car from behind, I stop by the trunk to pull out my battered pair of Puma Speedcat driving shoes and slip them on in place of my leather boots. Esay always unlocks the door for me from the other side—no power locks, you see. Because I’m a tall fellow and the car rides extra low on its Koni Yellow shock absorbers, I have to slowly slide into the driver's seat, using the Momo Prototipo wheel as support. Once inside, I’m greeted by the unmistakable car scent that can only come from a model assembled in the ’90s.

After twisting the ignition, I wait a while until the temperature needle lifts from its resting position before I begin the very slow crawl out of the parking lot. And only when the engine is at operating temperature do I even entertain the thought of pushing the car a little and having some fun.

Except how, in our hellish Metro Manila traffic, can this even be done? This is where a humble 1.6-liter DOHC motor with an estimated 80hp to 90hp becomes magic. During those rare moments when traffic frees up and there’s smooth asphalt underneath, there’s a very brief window to let the engine sing and the chassis dance. When the stars align and the conditions are ripe, I know I must seize the moment.

I’d short shift from first to second. And then I’d slowly but progressively open up the throttle. It’s a long, slow pull on second gear as the revolutions rise to 5,500rpm. As the tach needle sweeps clockwise, I’m reminded of that long, slow draw on my first cigarette in the morning. Except this time around, the sensation of my lungs filling with smoke has been replaced by the sound of the engine as the revs climb; the hum of the Advan Neovas against the ground; the movement of the double wishbone suspension on all four corners that transmits messages to my seat; and the roar of the wind.

As I ease off the throttle gently by lessening the pressure on that drilled-for-lightness gas pedal, the sound of the revs dropping is equally soothing. The intake and exhaust system resonates differently—like a slow and protracted exhale. It is amazing how the coming together of road, rubber, machine, fuel, air, electricity, and fire, can stir the memory banks and evoke such an enormous sense of well-being. It’s a feeling that I don’t want to end. 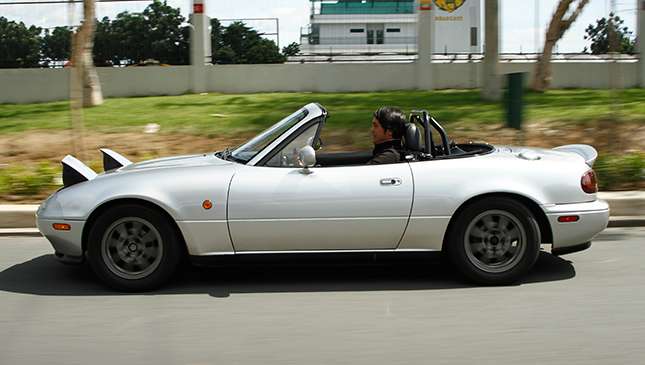 Life is filled with so much acceleration now, and even if you aren’t a car person, I’m sure you’ve felt it. I’ve been reading a book called Thank You For Being Late by Thomas L. Friedman, and in it he describes the technological innovations that have happened in the last 10 years.

The speed of the internet, the power of the microchip, and the social media explosion are just a few of the things that he dissects and analyzes. The lesson of the book is really quite simple. It says that to keep pace with the speeding currents, we need our oars in the water the whole time lest we capsize and get engulfed and overwhelmed. But Friedman says that’s not all there is to it. We have to slow down, too.

An essential part of being human is being able to process those rapid developments at our own pace. We mustn't let the sense of urgency of being first and fastest take over all the facets of our lives. And strangely enough, the longer I’ve owned that silly little Miata, the slower I’ve wanted to drive.

It’s not about being the fastest nowadays. Even when I am in the province with nothing but a twisty open road in front of me, I no longer frantically try to be the quickest guy on the mountain anymore. Just like that smooth ribbon of asphalt that disappears at the next corner, or those super-brief moments when the traffic clears up, those poignant events in our lives seem to come fewer and farther in between.

I want to savor that rare bit of smooth blacktop before the road turns into a jagged mess of poorly mixed concrete. I want to stretch out the clock during that tiny window wherein there’s no traffic up ahead and all is clear. Every time I get into the driver's seat of my beloved roadster, those desires are amplified.

Simply put, when I didn’t want to be in a hurry anymore, my Miata was there to catch me. 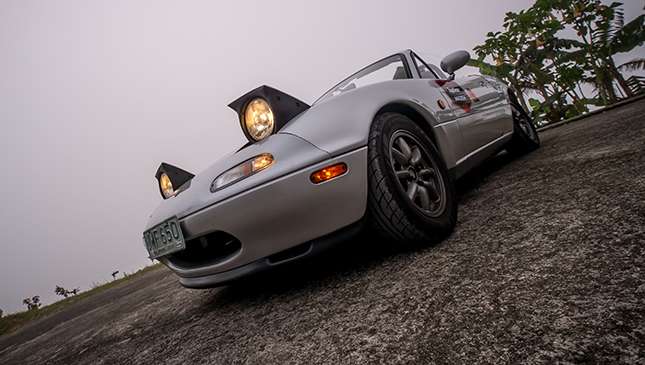 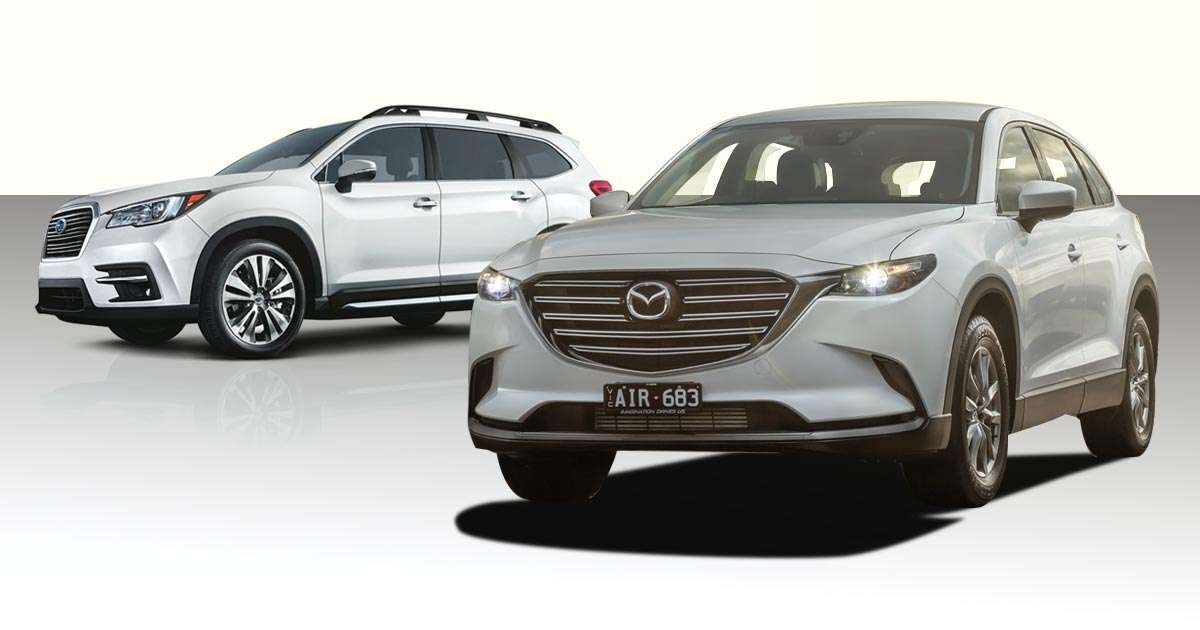 Spec-sheet brawl: Subaru Ascent vs. Mazda CX-9
View other articles about:
Read the Story →
This article originally appeared on Topgear.com. Minor edits have been made by the TopGear.com.ph editors.
Share:
Retake this Poll
Quiz Results
Share:
Take this Quiz Again
TGP Rating:
/20