The Aero-Vios Experiment (Part 2): Did our hard work pay off? 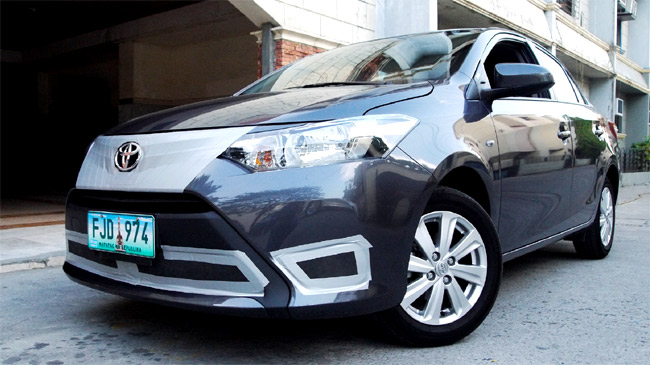 After a few afternoons wasted fabricating parts on our fantabulous Toyota Vios bodykit, it's finally time to go out and see if all that work will pay off. 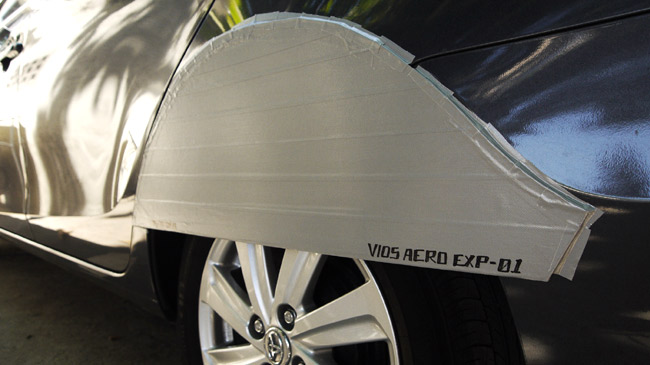 I finally tape the wheel skirts to the car. They're not as long or as low as they could be, but full-length skirts require bracing at the bottom to keep from rubbing against the tire. They also make changing flat tires a pain. For the next version of the kit, I can probably build skirts with flaps to access the lug nuts. 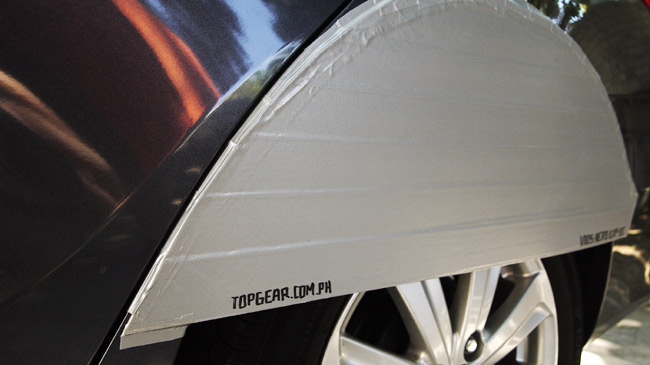 Yes, we've got to leave no doubt as to whose bodykit this is. To order your own exclusive kit, just give us a call. I can guarantee you our patented duct-tape organic hybrid bodykit costs less than a fiberglass one! Retail discussions can wait, though. For now, it's time to drive.

Unfortunately, it's a summer payday weekend, and everyone else has the same idea. My usual south loop--Southwoods to Cabuyao and back, for a total of 50km--is compromised by weekend beach traffic. The line for the South toll plaza extends all the way up to the Cabuyao gate. And it's still eight in the morning. 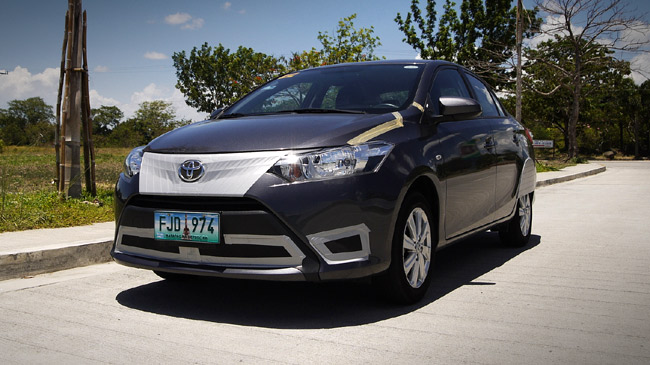 So I fall back on the less-ideal north loop between Southwoods and Susana Heights. That includes three steep hill climbs, two toll stops, and a low-speed lap around the unfinished commercial center outside Splash Island, to pad the kilometer count. To ensure I use enough gas to measure, I'm doing multiple loops per run and sticking to a strict "no neutral-coasting" policy and an 80kph minimum speed limit for the highway portion and 60kph for the low-speed segment, with more aggressive acceleration and braking than I usually use. While the Vios 1.3 does 22km/L in straight highway running at 80kph--a story for another time--I'll be lucky to get anywhere near 20 km/L on this route. 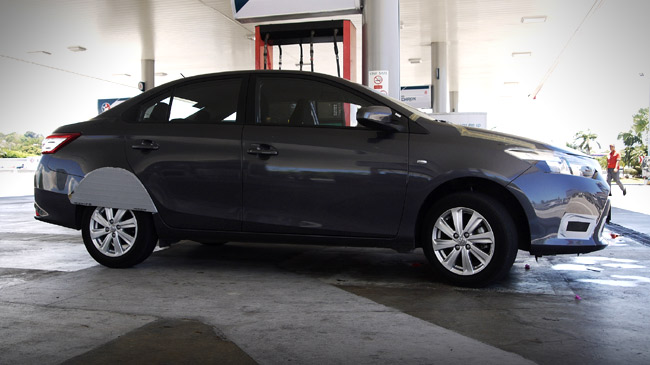 After scouting out the route, I head out just before lunch. The first run will be with the duct tape, the second run without. Taking off the duct tape is a lot easier than putting it on, so this keeps the turn-around time very short, ensuring that temperatures and traffic remain the same throughout the test. 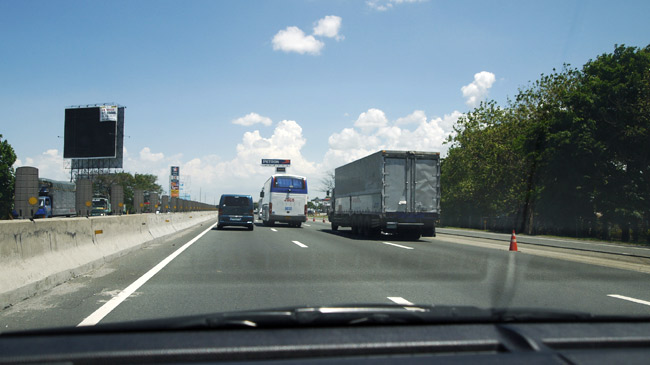 Talk about traffic: As I begin the first run, traffic has built up on the northbound side where a pickup truck has smashed into a car parked on the shoulder, flipping the latter into a ditch. Worse yet, thanks to the lunchtime truck-ban window, the Susana Heights exit is swamped, and I spend agonizingly long minutes in line at the single open toll booth there. And to add insult to injury, there's congestion on the southbound leg near a road-reblocking site.

Still, one must persevere for science! The experimental run, with an agonizingly low average speed of just 30kph due to traffic, yields 19.39km/L. Not bad, considering this route perfectly simulates mixed city-highway running. I strip off the duct tape bodykit and stuff it in the trunk. We have to keep the weight equal. I set off on the control trip and hope for the best. 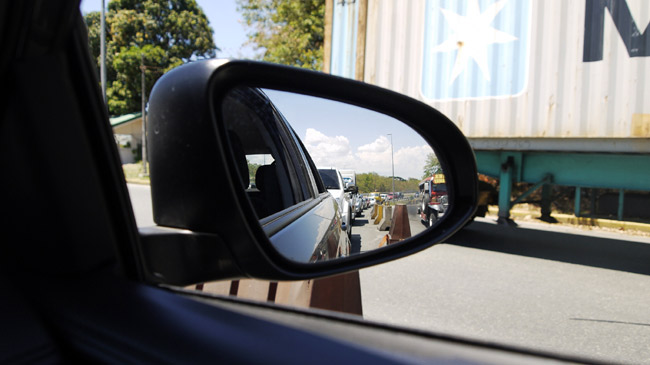 I reflect on how much gas we waste in traffic while sitting in the tollgate queue for the nth time. The teller looks at me incredulously and asks how many more times he's going to see me today. I answer, in all honesty, that I am done. Baked, fried and seared to a golden brownness. I wish I hadn't forgotten my sunblock. Thankfully, by the last round, a tow truck has pulled that poor car out of the ditch, and the southbound congestion is starting to clear up. It's not going to affect the results all that much, however. At the end of it all, the run yields just 18.36km/L. 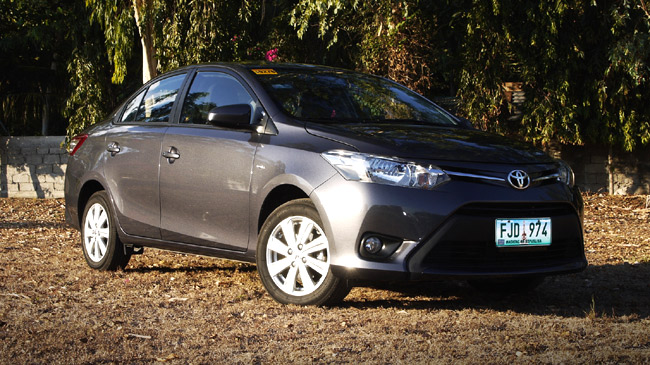 That's a 5.28% difference. This comes out to 0.29L saved every 100km. That's around P15 (give or take a few cents) saved on each trip. Given that this kit cost less than P500 to make, you could see your money back before the next oil change.

There are problems, though. Rear-wheel skirts make accessing the rear tire difficult. While automakers have flirted with them from time to time--like the stubby shape of the Prius--it's not to everyone's tastes.

Also, covering large portions of the grille is, understandably, problematic. While cars only need a fraction of their open grille area in normal driving, summer traffic in the Philippines is more like what you'd describe as "extreme."

If you're planning on experimenting at home, I suggest making an easily removable block, and to only to use it on the highway or in cooler weather, and to pay attention to your temperature gauge. If you get heat problems, remove pieces of the block until it runs well.

Seeing how much work you have to do for such marginal gains helps you appreciate how good the aerodynamics of a modern car like the Vios is. It takes a lot of work to improve the sedan's economy by just a single kilometer to a liter. Next time, we'll see if we can eke out twice the improvement with some more simple modifications--and hopefully without breaking the bank. 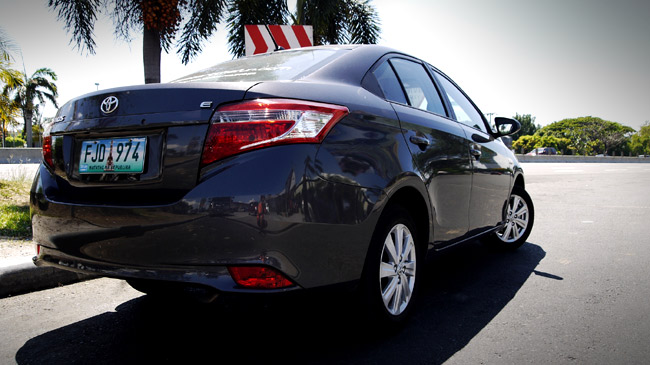 Video: Ken Block and friends navigate a laser-lit track for Castrol
View other articles about:
Read the Story →
This article originally appeared on Topgear.com. Minor edits have been made by the TopGear.com.ph editors.
Share:
Retake this Poll
Quiz Results
Share:
Take this Quiz Again
TGP Rating:
/20