The Aero-Vios Experiment (Part 1): How to build an organic bodykit

Low-cost aerodynamics for fun and fuel efficiency
by Niky Tamayo | May 26, 2014
CAR MODELS IN THIS ARTICLE

A few months ago, a bunch of journalists did an economy run in the United States, albeit one with a difference. When told that there were no restrictions on the use of duct tape, they went a little, uhm, crazy.

They ended up taping off most of the car grilles, the wheels and all the seams. This might seem a little silly to most people, but there's sound science behind this. Reducing turbulence around the car body will make it slide through the air better, and it should result in better fuel economy.

But how much better? And could those journalists have saved time by simply ignoring the tape and driving? That's what we're here to find out.

Initially, I'd planned to do this test Mythbusters-style, replicating that US eco-run down to the exact same cars used. But those were 30km/L superminis. I'd have to drive a long time to use enough gas to show results. I felt I could do better with something a little bigger and thirstier. 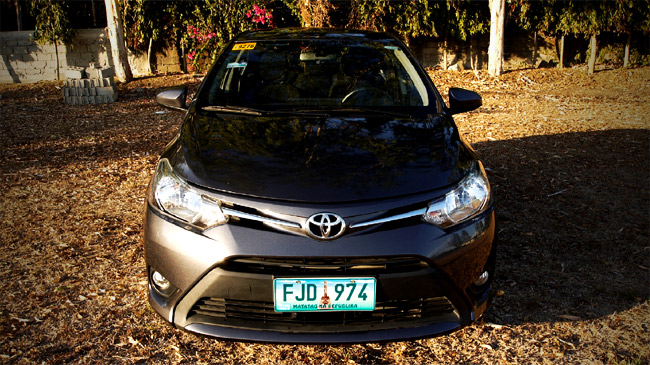 The Toyota Vios 1.3 E MT is hardly what you'd call thirsty, though. This car has a slippery 0.28 coefficient of drag, and the ability to hit over 22km/L on the highway easily. (Read our review of another variant: Toyota Vios 1.5 G MT)

While those journalists simply taped up the grille, the wheels and the seams, it seems a shame to do things half-heartedly. I draw up plans like so: 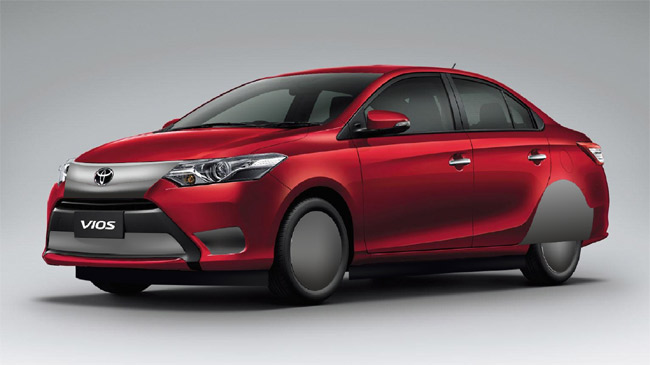 My materials, when I finally finish shopping with whatever spare change I can find lying around, consist of the following:

Any builder worth his salt will tell you to measure twice and cut once. For this build, I plan to measure once and cut as many times as needed.

First, I use some packaging tape to find out how low I can make a flat skirt without having it rub against the wheel. 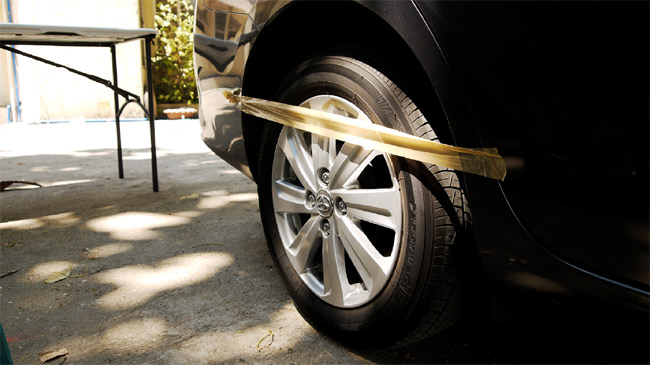 I tape old magazine pages together, then tape the resulting pattern sheet to the side of the car, down to the desired skirt length. I then trace the fender outline with a crayon. If you're doing this at home, don't use your old Top Gear issues, please. Besides, crayon doesn't work well on glossy paper. 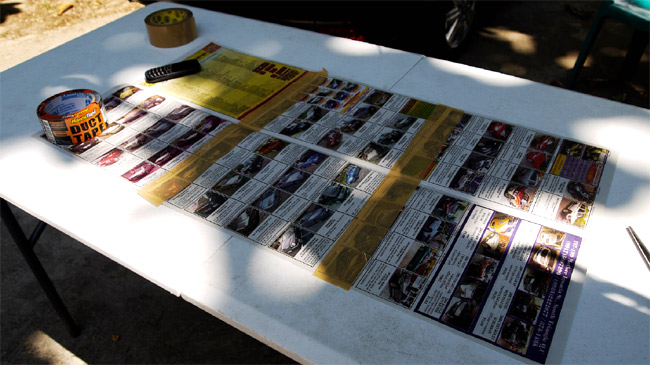 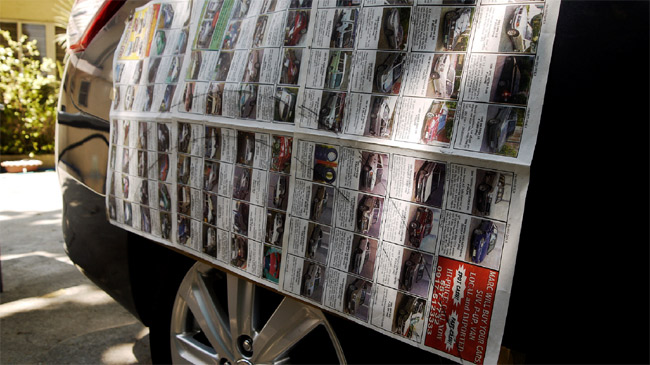 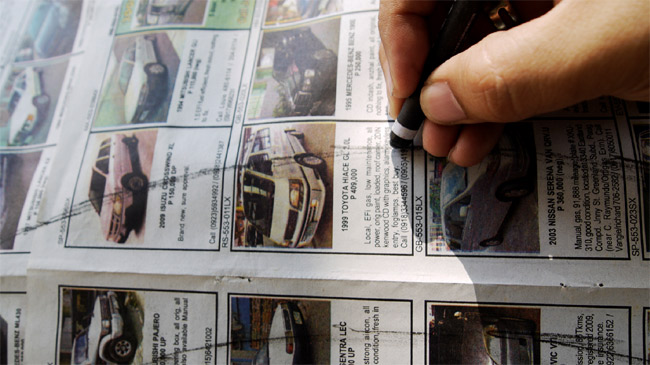 I then transfer the pattern to illustration board, using a pen to press the outline onto the board. I cut out the resultant pattern to test-fit. 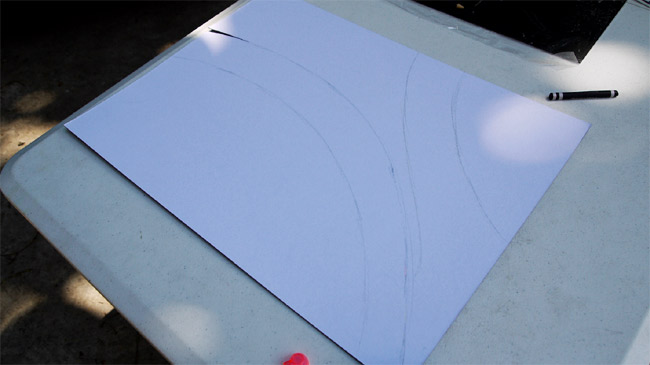 Once I'm satisfied with the pattern, I transfer it to hard board for the final panels. In case it rains, I'll be leaving them off until the day of the test. 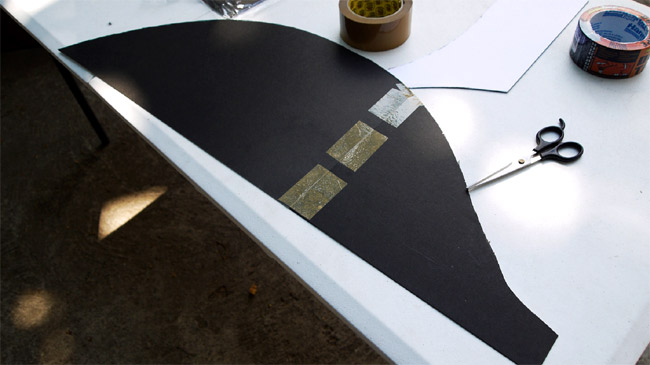 In the meantime, I move to the front of the car. The upper grille is too complex to cover with a board or rubber, so I waste half a roll of duct tape sealing it off. Considering the entertainment factor, I don't mind that this part of the kit can't be saved afterwards. That just means I might get to do it again. 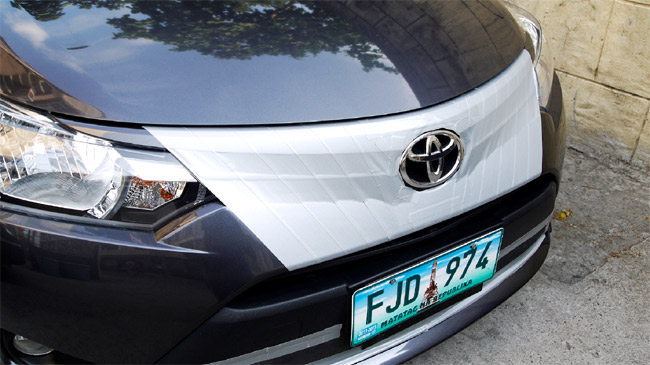 The lower grille cover and foglight covers take more measuring with used car magazines, then they're cut out of rubber scraps I had lying around from the last time I tried this. 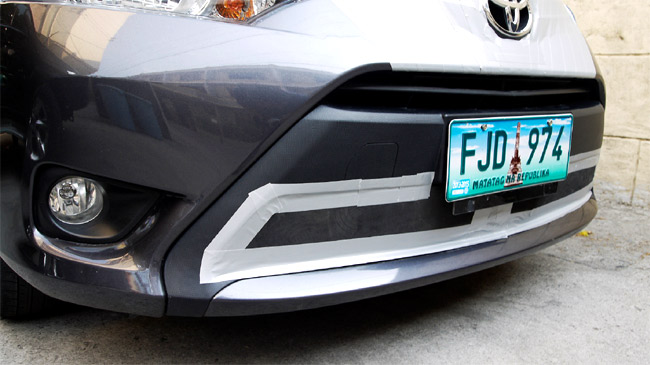 I leave a notch in the middle of the lower grille block in case I need to open it up a bit for more airflow to the radiator. Like many modern cars, the Vios has more grille area than it needs to feed the radiator. 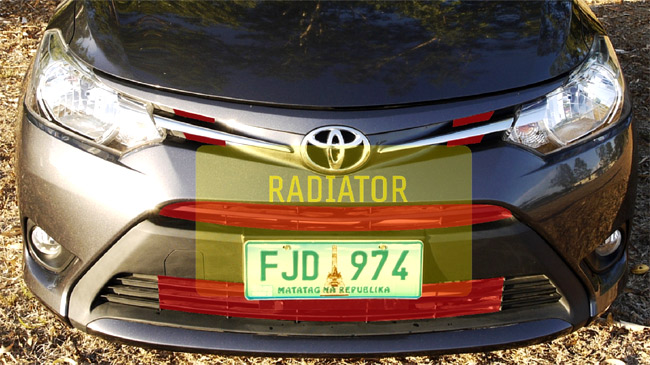 Those open areas (in red) that lie outside the borders of the radiator core (in yellow) channel air toward flat panels and structures that simply bounce it around instead of feeding the radiator directly. If you're not blocking them off, you could actually improve cooling by adding shrouds or panels to redirect the air to the radiator more quickly.

In deference to our friends at Toyota Motor Philippines, who are just crazy enough to let me do this, I'm not covering up that grille logo. Still, it has some pretty deep cutaways, so I fill them in with more scrap rubber. That's got to be worth an extra 0.01% improvement in terms of drag, right? 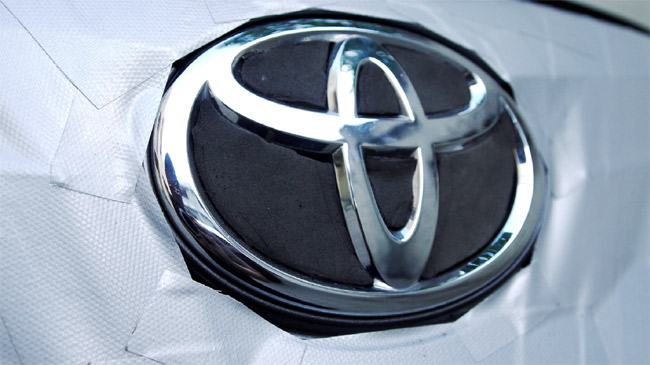 After some consideration, I scrap my plans for flat hubcaps and an underbody airdam. The Vios wheels are already reasonably aerodynamic, and I'm running out of duct tape. The underbody, on the other hand, is already covered with various vanes and devices for moving air around. To have any effect here, my airdam would have to come to within an inch of the ground. Maybe next time.

The car's looking pretty sharp, if I do say so myself. Passers-by, on the other hand, seem a bit, er, bemused by the modifications. But the proof will be in the pudding. In the next article, we'll see how well it does on the road.

Photos and illustration by Niky Tamayo

20 images: The girls of the 2014 Trans Sport Show
View other articles about:
Read the Story →
This article originally appeared on Topgear.com. Minor edits have been made by the TopGear.com.ph editors.
Share:
Retake this Poll
Quiz Results
Share:
Take this Quiz Again
TGP Rating:
/20