Is it worth the premium price?
by Dinzo Tabamo | Nov 22, 2015
CAR BRANDS IN THIS ARTICLE

Based on what it has been launching recently, it seems as if Honda Cars Philippines is intent on bringing back the '90s. This year alone saw the return of the Odyssey and the HR-V, both models that had ’90s counterparts. And then last month, HCPI surprised us by bringing back another car from the era of Nokia and Michael Jordan--the Legend.

This car needs no introduction at this point. The Legend is Honda’s full-size, hybrid-powered all-wheel-drive flagship model. With its LED lights and large but elegant body, it’s the epitome of understated luxury. Its engine and three electric motors combine to produce a healthy 375hp and a truck-like 462Nm of torque. And the drivetrain tasked to send all that power to the meaty 19-inch tires with gunmetal aluminum wheels, is called a Super Handling All-Wheel Drive (SH-AWD) system.

If this were another make and model, the SH-AWD alone might sound a bit too far-reaching and ambitious. Who but the Japanese would attach the word "super" to a stock automotive feature? But after driving the Legend, we realized this car is something else.

We had our reservations from the moment we heard this car was coming. This Honda costs P4,380,000, an amount not even P100,000 shy of the combined SRPs of the top-tier Accord and Odyssey. In fact, one of the most compelling arguments against the Legend is that the Accord is already so good.

With its Milano leather interior, climate-controlled seats (heating and cooling), eight-way front-row power seats with lumbar support, and 450W Krell audio system, the Legend is obviously a superior car, but is it twice as good as an Accord? Does the eight-inch multi-information display with navigation, multiview camera system and heads-up display justify the humongous price difference?

Actually, no, that's not enough. However, we learned what made the Legend worthy of its illustrious name during a quick test drive after the launch. When Honda applied its best engineering know-how to its flagship, this also meant putting in a healthy dose of sportiness. After some familiarization with the transmission setup composed solely of buttons, we drove off in the most expensive Honda in our market.

Being behind the wheel of the Legend is nothing short of revelatory. You feel the weight and the luxury of almost two tons of steel, aluminum and electronics, but the seven-speed gearbox conveys the V6’s power efficiently. The handling feels sure and stable, but with a delicious amount of feedback dialed in.

Step hard on the accelerator and a beast awakens under the hood. It snarls and grunts, each guttural sound pushing the Legend to velocities almost unbecoming of a luxury sedan. But the sensations have latched on to your brain’s pleasure center, and adrenaline is starting to flow. Before we know it, we’re touching speeds of 150kph, and the car still feels composed.

Yes, there are all sorts of safety measures like lane-keeping assist system, forward-collision warning, collision-mitigation braking, blind spot information, cross-traffic monitor, ABS, emergency stop signal, a plethora of airbags, and even a pop-up hood for pedestrians, but in the end the Legend just instills confidence and a sense of control in the driver.

The space in the back isn’t bad at all either. The room is comparable to other full-size sedans that are not long-wheelbase variants. We found the space to be more than enough for comfort and relaxation.

In the end, the dual capabilities of the Legend help us understand its raison d’être. It has the style, coziness, luxury and space to pamper the pickiest executives. But it’s every bit a sports sedan as well, with the chassis, power and handling to get anyone’s blood pumping.

So, in a sense, you are getting two cars in one amazing Legend. 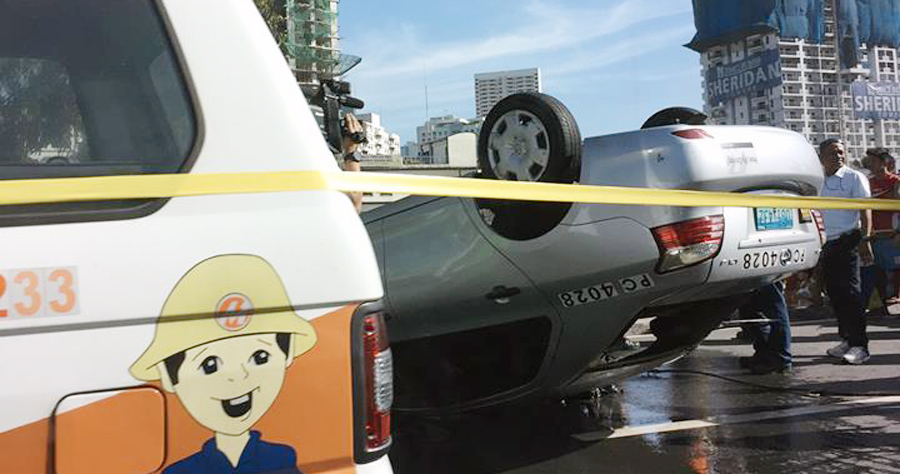 Should you jump in to rescue passengers of a sinking vehicle?
View other articles about:
Read the Story →
This article originally appeared on Topgear.com. Minor edits have been made by the TopGear.com.ph editors.
Share:
Retake this Poll
Quiz Results
Share:
Take this Quiz Again
TGP Rating:
/20