We think the refreshed Ford Ranger will look somewhat like this

Based on spy photos
by Andrew Guerrero | Jul 30, 2014
CAR BRANDS IN THIS ARTICLE 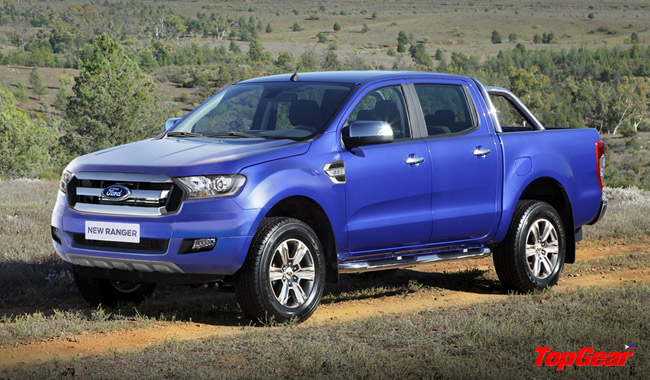 By now, most of you are aware that there will be an all-new Ford Everest SUV based on the current Ranger pickup. As the spy photos suggest, it will look almost identical to the Everest Concept that made its ASEAN debut last March at the Bangkok International Motor Show. You're probably asking: "What about its Ranger sibling?"

Having been on sale in the country for two years (three years in other markets), the hot-selling current Ranger isn't very old yet. But in the automotive world, this age means a mid-cycle refresh is just around the corner. Such is the case for the Ranger.

The Motor Report recently posted spy photos of the refreshed Ranger with light front camouflage while the American carmaker was doing test runs in Colorado. As expected, the refreshed front end will follow the general look of the all-new Everest. It will get slimmer headlights, a trapezoidal grille and a better integrated bumper.

It is likely that the Ranger will have its own grille pattern and front bumper design. Like with the all-new Everest, the faux fender vents, which also double as an engine designation badge, will be reshaped.

Based on the spy photos, the refreshed Ranger will inherit the more modern and more upscale-looking dashboard of the all-new Everest, which includes a restyled center stack. It will also receive a new steering wheel with more buttons. The headlight controls will migrate from its current stalk-mounted positions to the lower dashboard, and share the familiar-looking rotary knob control found on other new Ford models.

What's under the hood? Well, there's a strong chance that the 2.2-liter and 3.2-liter Duratorq TDCi engines will be carried over. Let's hope Ford sees this as an opportunity to throw in some extra horses.

Looking into our automotive crystal ball, the above image rendition is how we think the refreshed Ford Ranger will look like.

The refreshed Ranger is expected to make its debut sometime next year. Chances are, by the time it hits the market, it will be squaring off against all-new pickups aimed directly at it.

Do you think the refreshed Ranger can remain competitive against the upcoming all-new models from the Japanese brands?