From Kawit to Intramuros
by Jason Dela Cruz | Aug 14, 2013
CAR MODELS IN THIS ARTICLE

When was the last time you went for a drive to a place you hadn\'t been to in a long time? It doesn\'t have to be far--even just around the metro or nearby provinces. We\'re so occupied with the daily grind that we take these opportunities for granted--not just the drive itself but also the destinations such as historical landmarks. Rather than do the usual trip to the mall, how about visiting these places and rediscovering our past?

That\'s just what we did with Motor Image Pilipinas for the Manila leg of the Subaru XV SubUrban Drive. After an early morning cup of joe, we drove to the Aguinaldo Shrine, Emilio Aguinaldo\'s ancestral home in Kawit, Cavite. This historical place is where our country\'s independence was declared after being Spain\'s colony for more than 300 years. To be honest, I couldn\'t remember the last time I\'d been there. The shrine shows the kind of life this General-turned-President and his family led--with secret passageways and tunnels to escape danger, and with bowling lanes and a swimming pool to enjoy their leisurely time. On display are belongings, such as Aguinaldo\'s car and various weaponry, uniforms, medals and pins. It\'s a fascinating journey to the past.

Getting to and from Cavite is quite easy via the Manila-Cavite Expressway, commonly known as Coastal Road. I hardly travel this stretch, which I see more often from above during takeoff and landing. With a relaxing morning and a rather loose stretch with Manila Bay on one side and fishponds on the other (and Manila\'s buildings on the far horizon), it was a good time to get reacquainted with the XV, our April 2012 cover. The XV strikes the balance with the ruggedness of an adventure-seeker and the composure of a city dweller.

Our next destination was Intramuros. The rich history we have is very much reflected here. With the area\'s proximity to Manila Bay and the Pasig River, it\'s no wonder the Spanish fortified this district. It was geographically advantageous.

Something we had been looking forward to was \"The Classic Intramuros Walking Tour with Carlos Celdran.\" Apart from fellow Pinoys coming to see it, it\'s amazing how much foreigners flock to see this guy. It\'s an indication of how popular he has become. It isn\'t so much about the tour per se--it\'s more about the sense of humor he injects into the tour. It\'s a satirical and compact history lesson. And in a span of three hours (you won\'t realize it), it\'s more informative than what you learned in school (not to mention more amusing).

So, the next time you\'re looking for something to do, why not go for a drive and experience our history once again? 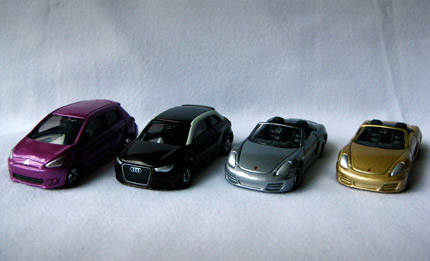 The 3 latest toy cars from Tomica
View other articles about:
Read the Story →
This article originally appeared on Topgear.com. Minor edits have been made by the TopGear.com.ph editors.
Share:
Retake this Poll
Quiz Results
Share:
Take this Quiz Again
TGP Rating:
/20