Whoever said you can’t enjoy both off-road and tarmac?
by Raymond Figuerres | Jan 7, 2019

I have been told riding on the tarmac is very different from riding on a dirt road. This is followed by assertions that a lot of MotoGP legends, among them Valentino Rossi, improved their performance in circuit racing by regularly riding dirt bikes.

And whoever said you can’t teach old dogs new tricks? Although I’m already 46, the age when the middle-age crisis is supposedly at its worst, I bit the challenge and booked a training session at the Mitas-KRB Off-Road Track, located in Antipolo and operated by veteran motocross rider Mel Aquino. But let me first set the record straight: I’m doing this not to become an overnight champion, but to simply hone my daily city-riding skills with road safety primarily in mind.

We started the day with stretching exercises for a one-on-one session with Coach Darell Divinagracia. Next, he asked me to fold up the kickstand of the Yamaha XTZ 125, an entry-level off-road bike that also happens to be my training tool for the day. Using only a finger or two, I was instructed to hold the XTZ straight up after locating and using its so-called ‘balance points.’ This routine is no doubt very useful.

Dirt riding calls for a different position: Elbows need to be high and a bit spread out to enable the rider to hold the hand grips properly and effectively twist the throttle. After briefing us about the correct throttle input, Coach Darell demonstrated how to execute the ‘lean out’ technique when attacking corners covered with loose soil.

Because I’m more familiar with road bikes, it took a while before I was able to do the ‘lean out’ position on corners due to initial fear that the bike would slide in a wild manner and I would end up in a nasty crash if I used too much throttle. Dirt riders also stick their legs out parallel to the fork when approaching a turn, and hang their bums out on the other side of the saddle to counterbalance.

After some practice runs, Coach Darrell and I rode around the flat track in first gear as he further explained proper dirt riding. Against my road-riding habits, I did as instructed. Amazingly, the motorcycle turned sharply on loose gravel with me applying more gas combined with the appropriate riding posture. I also found that it’s more difficult to control the bike whenever I gripped the handlebars too tight and failed to squeeze the tank with my knees.

To be able to execute good cornering in a ‘lean out’ position, I was told to relax, and “let the bike steer itself.” After a few more laps of doing what I was told to do, I could get the bike to properly steer itself even as I powered out from the turn. After doing a few laps, I became confident to take the long straight in third gear before quickly downshifting to second gear in preparation for a sharp 90-degree turn. As I was getting familiar with this awesome routine, Coach Darrell suddenly asked me to go around the track—but this time in the opposite direction!

This quickly brought down my soaring confidence as I had to relearn to do everything going counterclockwise. With a training module squeezed in one day, information overload often leads to confusion. Being an anesthesiologist by profession, the last thing I want is to be injected with anesthesia for a serious injury.

But Coach Darrel’s inspiring words helped me build my riding confidence. It only took a few laps before I found myself again aggressively squeezing the throttle, leaning out, and power-sliding the bike while taking the corners at a faster pace. Now my smile is locked ear to ear.

Next on the agenda were the slalom and braking exercises. The former required slow-speed turns, precise throttle control, and good lean-out position for the bike to follow. Executing the slalom was more fun than I earlier imagined. Brraaap! However, the braking exercise was a different story. It was time to slam hard on the rear brakes to allow the rear tire to slide a bit. This would allow me to point the bike into the tight entry point of the slalom course. Modulating the rear brakes won’t cause the tire slide—only a committed stomp will allow this skillful maneuver to happen. Blame hesitation as it took me a few attempts before I was able to pull a good, orgasmic rear-tire slide that resulted in an impressive slalom attack.

Keeping the riding rhythm also posed a big challenge as it was necessary for me to master the next drill: a fast and tight ‘Figure 8’ maneuver. Up to this point, I’d managed to remain on the saddle until overconfidence triggered my downfall, literally! As I was leaning the bike more to speed up for the Figure 8, I failed to match the turning of the bike with a proper throttle burst, causing the Yamaha XTZ to kiss the ground. At least I got to practice the bike recovery technique, which, I can proudly say, was done flawlessly.

My introduction to dirt riding ended with a guided tour to the elevated sections of the camp where the pros do high jumps. Suddenly, Coach Darrell was mentioning unfamiliar lines like ‘scrubbing a jump,’ ‘seat bounce,’ ‘whiskey throttle,’ and ‘whoop de dos,’ which all turn out to be part of the motocross jargon.

Consistency is the key to a good life. This goes with my favorite line: “I don’t bite more than I can chew.” Instead of attempting to whip the bike into the air, which was very risky considering my feeble skill level, Coach Darrell showed me around the other parts of the track while I ride standing on the footpegs - a riding stance I'm very much comfortable with - going up and down the big and small jumps but in a slow, safe pace.

How’s that for preserving my riding gear for a good photo op? Well, here’s the start of my off-road riding adventure. See you at the next training level! 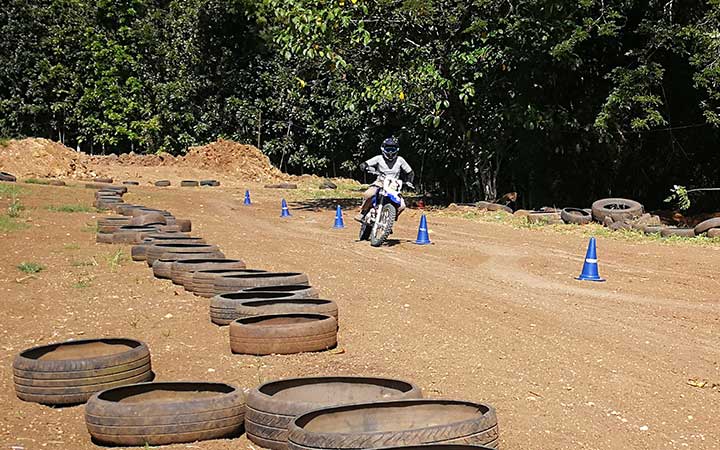 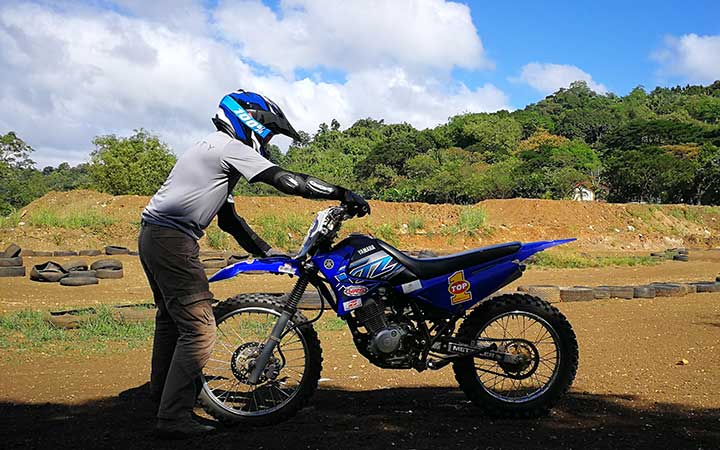 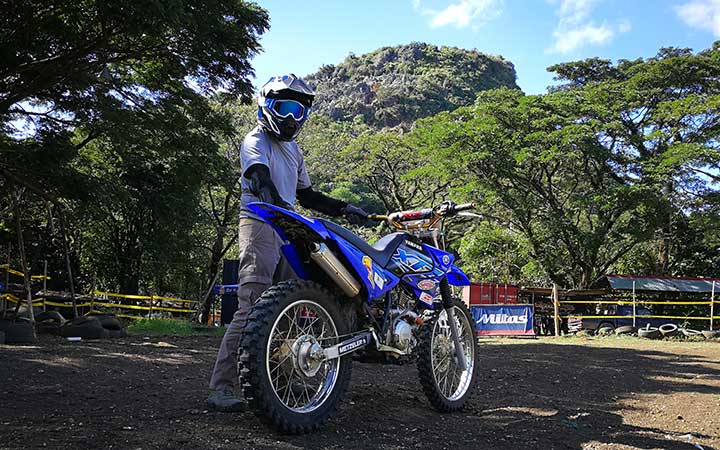 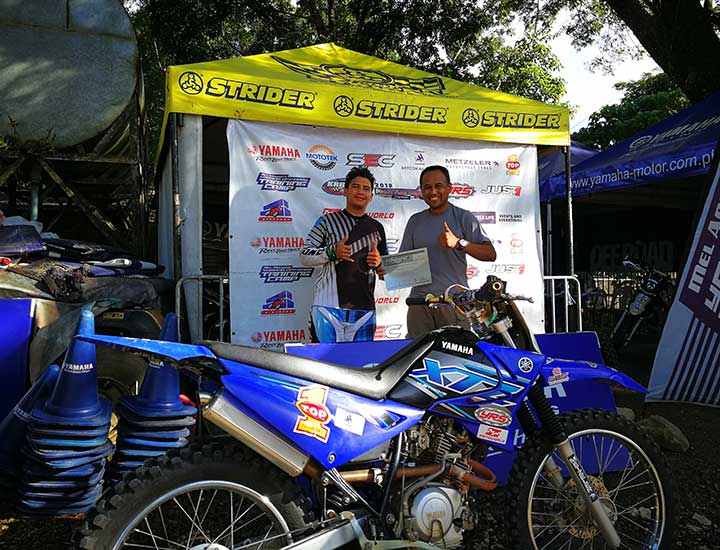 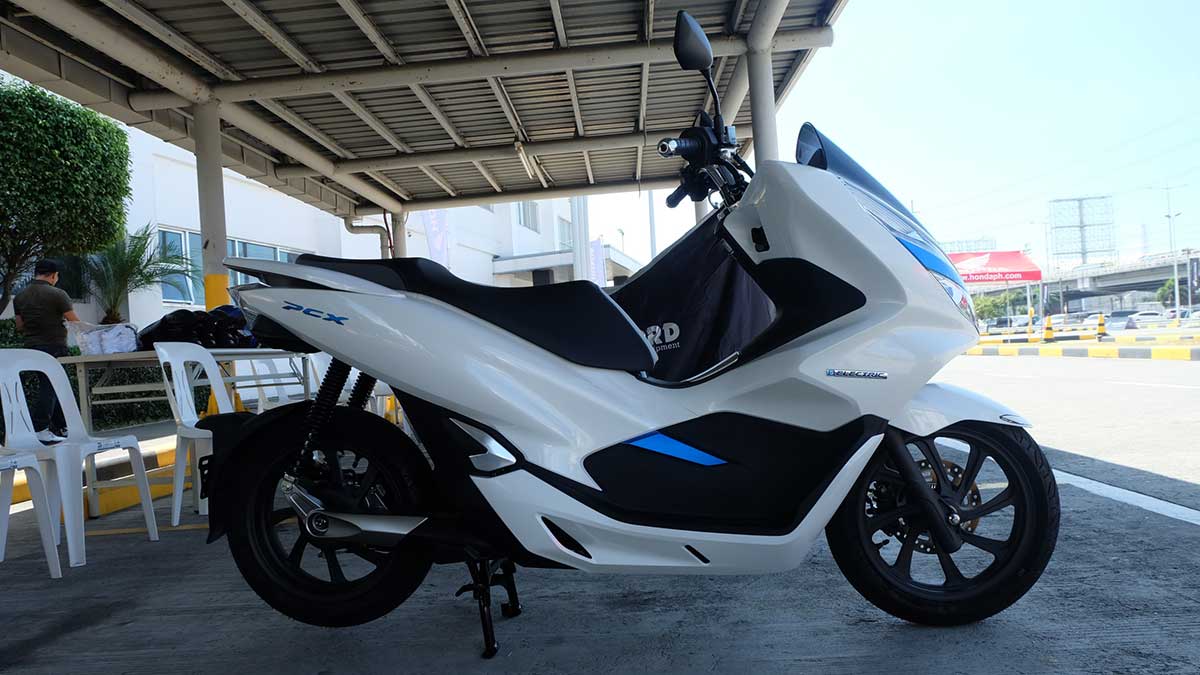 Honda e-scooters to be powered by renewable energy source in Romblon
View other articles about:
Read the Story →
This article originally appeared on Topgear.com. Minor edits have been made by the TopGear.com.ph editors.
Share:
Retake this Poll
Quiz Results
Share:
Take this Quiz Again
TGP Rating:
/20