“Meet us at the aquarium. Sunday. By the kissing dolphins.”

Safe to say, the watermark for weird is set high from the outset. That text wasn’t some wonky Engrish translation, either, as pulling into a seaside car park next to some snogging dolphins in the Higashiibaraki District of Ibaraki, I’m hit by a juggernaut of dense sound and smell.

Overly rich fuel rips up my nostrils, kicking my tear ducts into ‘mild sob.’ Below, an army of titchy 50cc two-stroke scooters are ring-a-ding-dinging around. They’re all slammed, wearing outrageous fairings, wild paint jobs and bizarre trinket jewelery. Perched on top of them, not a bunch of youths craving a car license, but enthusiastic elders—all beaming with wide smiles and radiating enthusiastic golden retriever energy. It’s a scene. Literally.

Known as gentsuki (pronounced ‘gent-ski’), scooters have always been accessible and affordable mobility for Japan’s crowded streets. But for some, it’s also the first rung of the tuning ladder, a way to express their personalities and make something feel like their own. 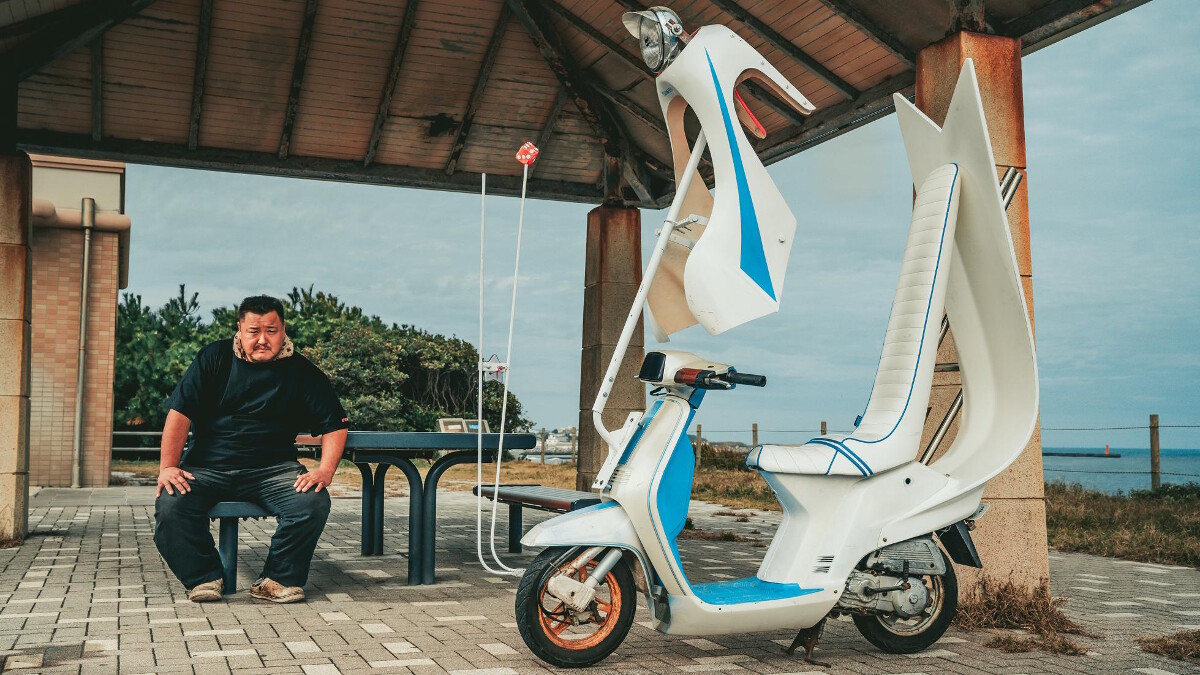 Scooter modding really booted off in the late ’70s and the early ’80s, when DIY custom car and bike culture reached fever pitch. Being easy to modify, scooters started to be hacked with a couple of hallmark modifications. Notably the complete lack of suspension.

Yep, to get that low-low look, people rip out the rear spring, so the only dampening you have is the seat, the tires and the squidgy bits of cartilage between your vertebrae. Custom belly rubbing cowlings and kaido racer aero wings can then be added, a rowdy bosozoku exhaust (the louder the better), and some crazy paint or decals.

After 40 years scraping speed bumps and piercing ear drums, this closeted domestic scene is now bursting out of Japan. Thanks to the scooters’ Instagenic nature, gentsuki are now springing up everywhere—from California to deepest, darkest Northamptonshire. So, we thought we’d go back to source and hear from some of the OGs. 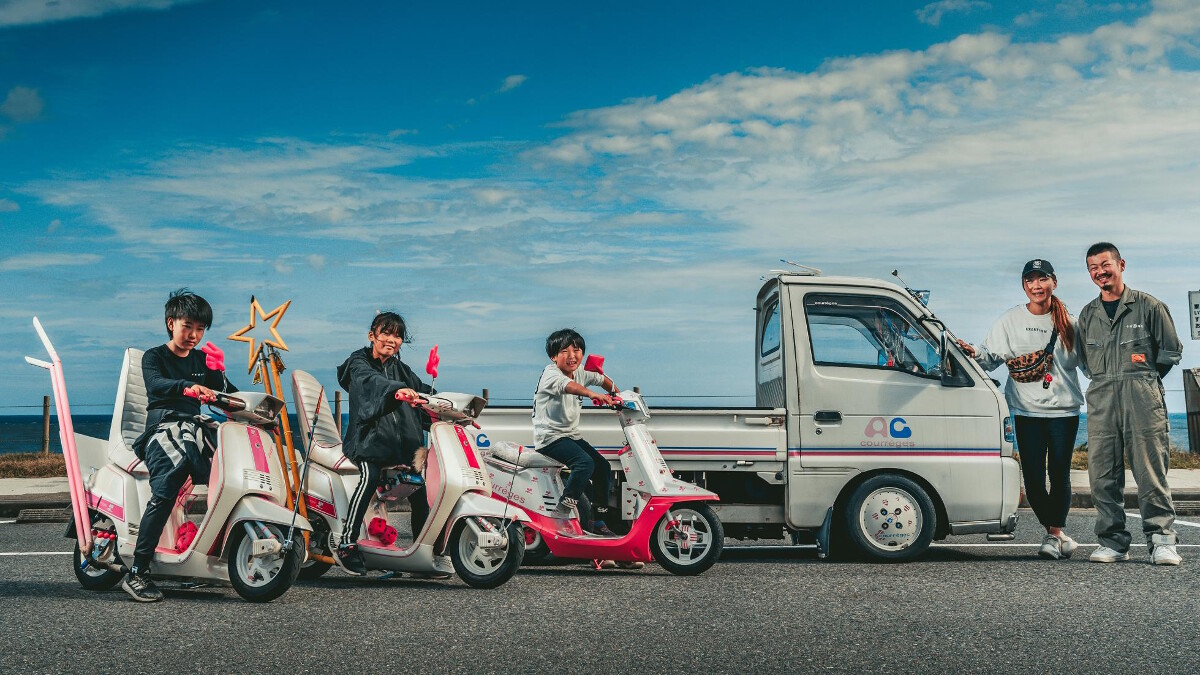 “It started when I was a kid watching American TV shows like Knight Rider on TV. Basically, any kind of personal transportation that you can customize, I’m into. But when the Tact was sold new, Honda teamed up with innovative French fashion designer, André Courrèges, to market a special edition toward boys and girls in their twenties. They wanted them to appeal to a new, younger Japanese audience, and it worked. I kept their theme from back in the day, but added parts that you might see on more aggressively styled motorcycles. So I guess you can say they are cute with a kind of comical edge.

“From what I have seen on social media, people are starting to catch on to this culture and I really hope they take it further. Scooters are easy to work on and customize yourself; that is probably the biggest appeal for me and many of my friends who have them. I would encourage people who are into these scooters to really research and look as deep into the culture as they can for ideas and inspiration. Even if you mess up, you learn from it and can fix the problem easily.” 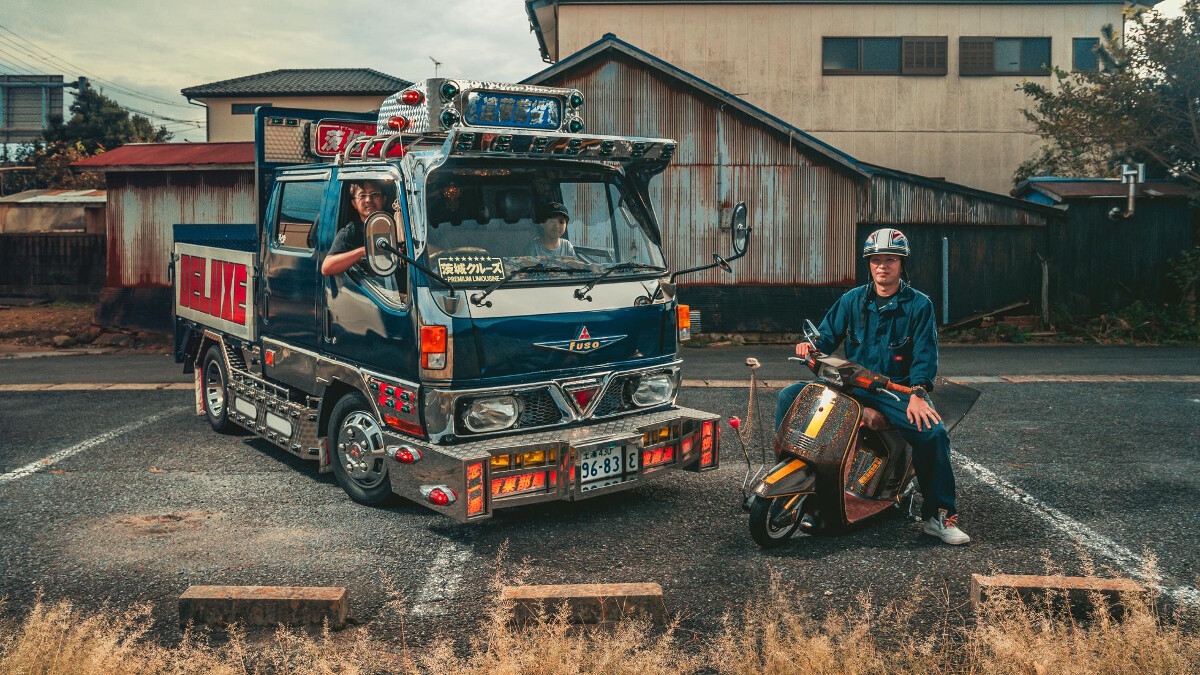 “I guess you could say that my scooter has similarities to ‘dekotora’ (decorated Japanese trucks). Dekotora shops here in Japan have all kinds of truck parts, and a lot of scooter guys are also truck drivers. Naturally, parts sold for trucks sometimes make their way onto custom scooters. See the heavy flake in the paint on mine? That’s a bit like what you see on some dekotora. The velour material on the seat cover also comes from the truck shop.

“The best thing about these scooters is they’re simple to ride: Just jump on and go. Easy. But they are slow, so riding one alone gets boring. That’s why you’ve got to have a group of friends to cruise around with. That’s what makes it fun.” 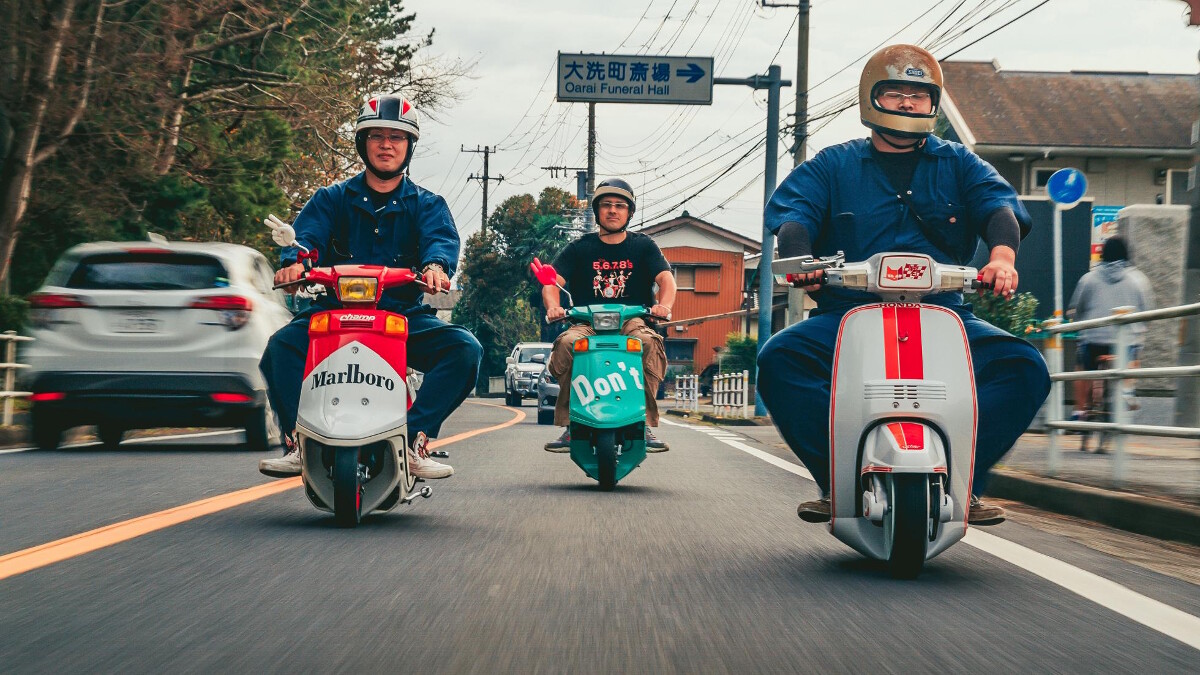 “My style is influenced by old-school Japanese street racers, as well as a local scooter maniac. His name is Oyakata and he’s a hero to all of us. He builds super-clean bikes with all kinds of cool ideas, and the craftsmanship is crazy. But, unlike others, I’m not just interested in visual modifications, but also details like the engine. I restored this entire engine and bored it out to 82cc for more power.

“Where does the scene go from here? I would say it’s up to people in other countries now. In Japan, most young people have lost interest in cars and bikes. I see young people in America taking influence from Japan and modding them. I want to see them do crazy stuff and put their own twist on our style. Maybe they should try making a vertical engine or something.” 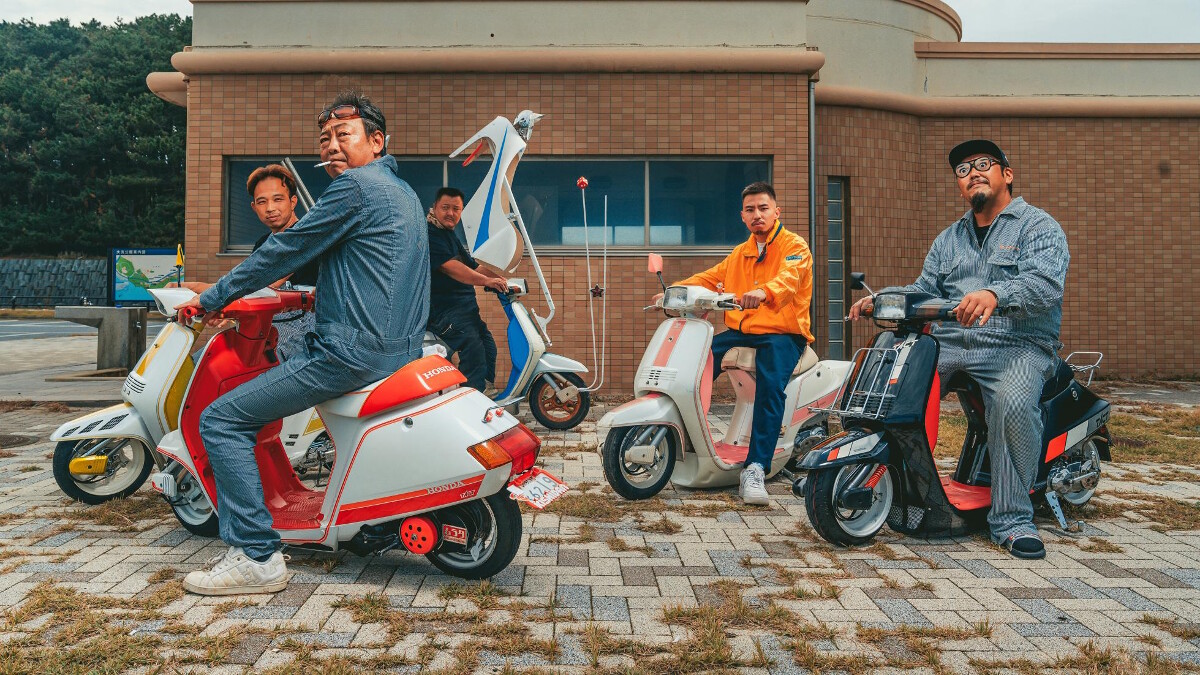 “We call ourselves the unofficial Tact squad, since we all have varying models of the same Honda scooter. For us, attention to detail is key, and we try to keep everything looking period correct, while still incorporating modern parts.

“The Tact is popular because it’s easy to get hold of parts. But because the scooters themselves are getting rarer, the largest cost is probably just buying the base-model scooter to work with. Especially the ones in rare trim or rare grade. But you can still easily pick up a basic one for $100 on the Internet.” 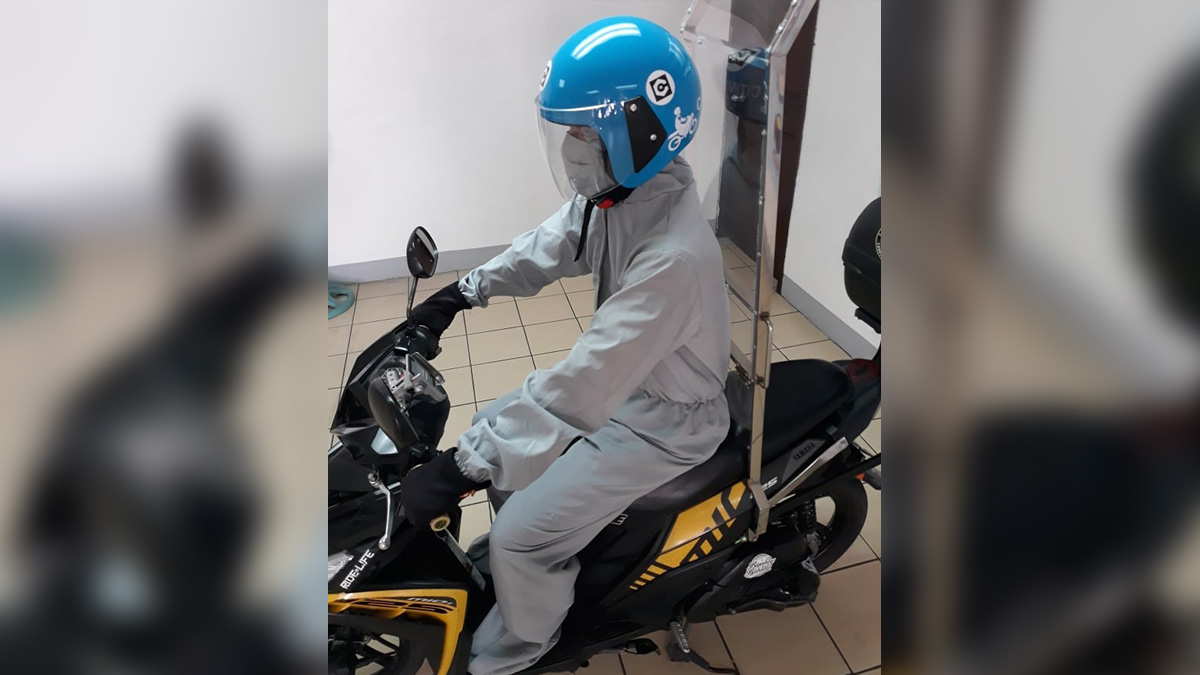 Could this PPE for riders soften the government’s stand on the motorcycle-taxi ban?
View other articles about:
Read the Story →
This article originally appeared on Topgear.com. Minor edits have been made by the TopGear.com.ph editors.
Share:
Retake this Poll
Quiz Results
Share:
Take this Quiz Again
TGP Rating:
/20