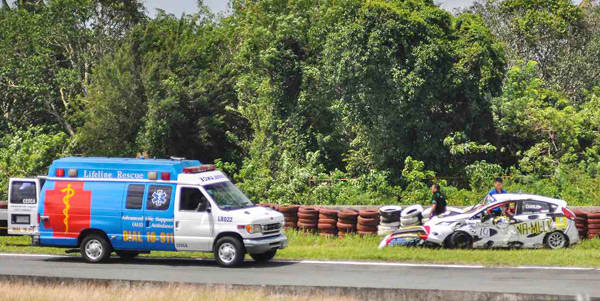 Racing enthusiast Charlie Cojuangco figured in an accident in the third and final race of the opening leg of the Tuason Racing School (TRS) Cup. Driving a Ford Fiesta just like everyone on the 12-car grid, Cojuangco hit competitor and newcomer Jussi Hoikka while diving full-speed into Turn 2 of the Batangas Racing Circuit.

While the incident looked serious, Cojuangco actually only suffered a shoulder injury, a testament to the car's build quality and structural integrity as well as the safety measures implemented by the organizers.

According to TRS head JP Tuason, TRS race marshals were on the scene of the accident "within one minute" of the collision. Tuason added that the ambulance team was on site "within four minutes of the accident happening."

"As soon as the accident occurred, the red flag was given and all parties scrambled to assist Charlie," Tuason told TopGear.com.ph. "After about 10 minutes, Charlie was out of the car and on his feet. He was even waving to the crowd. We took extra time to get Charlie out of the vehicle because he was complaining of a sore shoulder."

To prove that the accident wasn't serious, Tuason shared with us a conversation that took place between himself and Cojuangco right after the incident.

"Upon reaching the scene of the accident, the first thing Charlie said to me was simply, 'Pare, can you please wipe my face?'--as he had some bits of dirt on his face," Tuason narrated. "He also said, 'What do we need to do to repair the car?' This relieved me a lot simply because if the driver had been seriously hurt, then issues like personal grooming and car repairs would be last on his mind."

Tuason noted that "the car held up in the accident. It definitely took a good beating, getting damages on almost all sides and panels, but within minutes of the accident, the driver literally walked away from the car. This shows the effectiveness of the safety equipment installed in the car, including the roll cage, the seatbelts and the racing seat."

Accidents are really part and parcel of car racing, but with professional race organizers like TRS, competitors, spectators and sponsors can rest assured that the damages will be manageable. At the end of the day, the incident shouldn't take away from the fact that the first leg of the TRS Cup was a success.

TRS Cup opens 2012 season with action-filled races
View other articles about:
Read the Story →
This article originally appeared on Topgear.com. Minor edits have been made by the TopGear.com.ph editors.
Share:
Retake this Poll
Quiz Results
Share:
Take this Quiz Again
TGP Rating:
/20