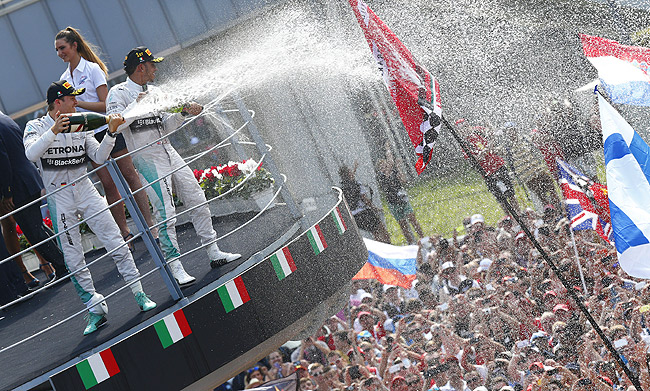 From the controversies and the unpredictability of the Belgian Grand Prix, Formula 1 moved on to the more predictable round at Monza in Italy. Why was it predictable, you ask? Because it was held on a power track. And from the first moment, it was clear Mercedes was going to blow everyone away. Well, that's exactly what happened.

The Italian Grand Prix is also usually where speculation of the goings-on in the sport becomes a reality. And it has something to do with those guys in Red.

It was an unsurprising outcome for Mercedes...

If you were not powered by Mercedes, then you were basically screwed. The first six cars on the grid were led by the two Silver Arrows (were you expecting somebody else to be in front?). They were closely followed by the next best team at the moment, Williams. And 0.5 second behind were the two McLarens. Fernando Alonso and the Red Bulls, however, weren't far behind Jenson Button in P6, making it look interesting.

The French engine supplier was never going to match Mercedes in terms of power. Monza's low downforce characteristic wasn't going to help Red Bull Racing's cause either. But their race went better than expected.

...but an appalling one for Ferrari.

Once again, Alonso was quick off the line, but was squeezed toward the outside of Turn 1. As the race progressed, he was working his way up and could've challenged Daniel Ricciardo for fifth, until his energy recovery system failed. It was not only the Spaniard's first retirement of the season, but his first in front of the Scuderia since joining the team in 2010. He won it that year and was on the podium three races in a row. At least Kimi Raikkonen kept the points streak alive, crossing the line in ninth.

The team's disappointing campaign also led many to believe that Ferrari president Luca di Montezemolo was on his way out. Three days later, he stepped down after 23 years at the helm of Ferrari.

He started with the sports car's parent company, Fiat, in 1973 as Enzo Ferrari's right-hand man, and became Scuderia Ferrari's sporting director a year later. Ferrari became successful under di Montezemolo, not just in winning Formula 1 championships, but also in becoming a global brand through various establishments and merchandise. The end of an era, indeed. And the question is: Where is Ferrari headed to?

It finally came together for Lewis Hamilton...

He looked faster all weekend and got pole position. He encountered a "race start" problem at the start and fell to fourth. After a few laps, however, he clawed his way back to second, and pressured Nico Rosberg to make a mistake (for the second time) at Turn 1 and hand him back the lead. Lewis didn't look back. If anything, the win boosted his morale and trimmed Rosberg's lead to 22 points.

Rosberg would surely want to kick himself for making the same mistake twice, but there's no point in crying over spilled milk. He still finished second, which is good for his championship points haul. It's the German who has been more consistent between the two Mercedes drivers.

It's another race to remember for Daniel Ricciardo...

The Red Bull ace had a slow start, but had a methodical approach and worked his way up to fifth. The Australian took the slipstream from Sebastian Vettel and pressured his teammate to lock up, ultimately overtaking him a few corners later. This battle was reminiscent of Ricciardo going wheel-to-wheel with Alonso in Germany--taking the slipstream and giving the Spaniard no choice but to brake late. While doing so, Daniel had wonderful tire management, too.

It's a good result from Felipe Massa, at last...

It was a day we didn't hear the Brazilian whine because things finally went his way, claiming his first podium for Williams. To his credit, he drove a good race, even fighting with Lewis for a few laps after the start. He eventually let the Brit through and concentrated on his own race.

...and an equally good result from Valtteri Bottas, despite the setback.

The Finn lined up third on the grid, but slipped out of the top 10 after the start. Valtteri was the man on the move (yes, the Flying Finn!) and had a great drive to fourth. He continues to show that he's a talent of the present who has a bright future. We get the feeling we're going to write about this guy a lot.

It was a great day for the fans, who were treated to wheel-to-wheel racing once again...

The fight between Jenson Button and Sergio Perez was mega! We can't remember how many position changes there were between them. That was fun! It's nice to finally see Perez pull off some clean moves.

...and not a bad day for anyone, really.

It doesn't matter if you're a Button or a Perez fan, everyone wins with that kind of entertainment, and we're sure both drivers had fun.

PIMS 2014: Toyota PH to introduce updated Fortuner and Hilux TRD
View other articles about:
Read the Story →
This article originally appeared on Topgear.com. Minor edits have been made by the TopGear.com.ph editors.
Share:
Retake this Poll
Quiz Results
Share:
Take this Quiz Again
TGP Rating:
/20