1st ever pole by a Japanese driver
Jun 13, 2014
CAR BRANDS IN THIS ARTICLE 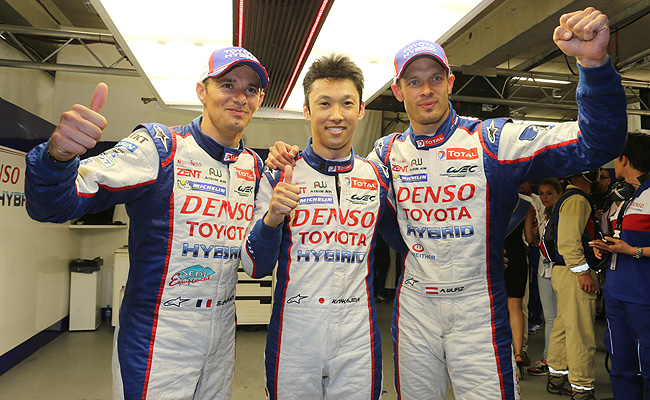 Toyota's #7 TS040 Hybrid has secured the pole position for the 2014 staging of the 24 Hours of Le Mans. The race is scheduled to start tomorrow, June 14.

Kazuki Nakajima, who shares the #7 car with Alex Wurz and Stephane Sarrazin, became the first Japanese driver to take the famed annual endurance race's pole position with a time of three minutes, 21.789 seconds. Nakajima's run also earned for Toyota its second pole position at Le Mans after the GT-One did it in 1999.

As for the Japanese carmaker's other TS040 Hybrid car (#8), drivers Anthony Davidson, Nicolas Lapierre and Sebastien Buemi will start from third on the grid.

Meanwhile, the Porsche 919 Hybrid of Romain Dumas, Neel Jani and Marc Lieb will occupy the second spot. Audi, winners of the past four races and nine of the last 10, will start in fifth place with its R18 e-Tron Quattro behind another Porsche 919 Hybrid.

"Even though it is a 24-hour race, it is a very good feeling to be on pole position," Nakajima said at the end of the qualifying run. "I am really happy with the car, so many thanks to team. We have prepared a great car for the race. I was struggling with the traffic, but I managed to get one lap and it was just enough to get the pole. It's going to be a tough race, but tonight I am happy. We didn't have to compromise our program, and we managed to put in the lap time for the right moment. Now I think we are well prepared for the race."

GoPro now integrated with BMW Group's infotainment system
View other articles about:
Read the Story →
This article originally appeared on Topgear.com. Minor edits have been made by the TopGear.com.ph editors.
Share:
Retake this Poll
Quiz Results
Share:
Take this Quiz Again
TGP Rating:
/20