After the Batman-inspired Kia Optima
Oct 31, 2012
CAR BRANDS IN THIS ARTICLE

Following the debut of the Batman-inspired Kia Optima nearly a month ago at the New York Comic-Con, the Korean carmaker has now revealed four more of its superhero-inspired cars at the 2012 Specialty Equipment Market Association (SEMA) show in Las Vegas. 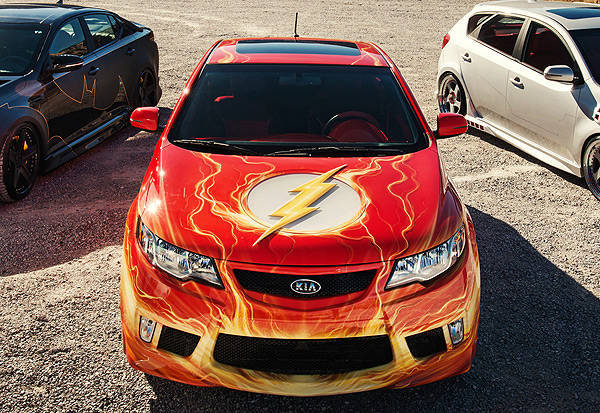 The Flash-themed Kia Forte Koup has a red, orange and yellow airbrushed exterior paint that matches the Scarlet Speedster's costume, while a cutout in the hood incorporates The Flash's logo. Twenty-inch Asanti color-matched wheels with Continental Extreme Contact tires keep the car firmly planted on the ground while a custom coilover suspension lowers the Forte Koup for razor-sharp handling.

Inside, the Forte Koup's seats are upholstered in black nappa leather with red suede and yellow serving as contrasts. Character artwork is also embroidered into the seats, while the headliner was upholstered using black suede with custom stitching and custom-painted pieces throughout the interior. For its entertainment system, the Koup was fitted with two, 10-inch subwoofers and two sets of coaxial component speakers with a Quart four-channel amp, while a pair of Rosen Entertainment seven-inch monitors resides in the front headrests. 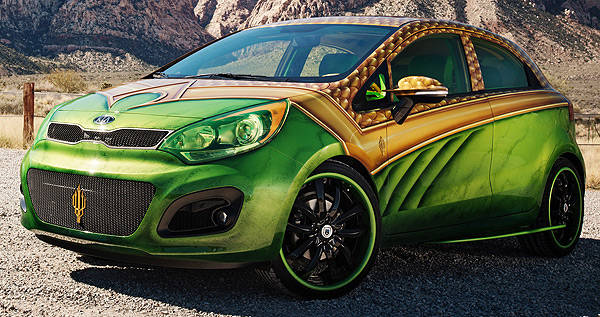 The Aquaman-themed Rio received a special gold, green and orange exterior paint and a bodykit with custom-fabricated fins. It also got Oracle LED wheel rings and body lighting across the exterior as well as 20-inch color-matched Asanti wheels wrapped in Continental rubber.

For its cabin, the five-door Rio's seats were upholstered with green leather that has yellow and gold accents. The headliner was customized using green suede, while the Aquaman logo was stitched into the back seats. The cargo area, meanwhile, has a customized enclosure that features Aquaman comic-book art and a unique polycast cutout that creates an underwater scene lit with Oracle LED lighting. Completing the Rio's interior are 12-inch subwoofers and two coaxial component speakers and amp as well as two seven-inch Rosen Entertainment monitors. 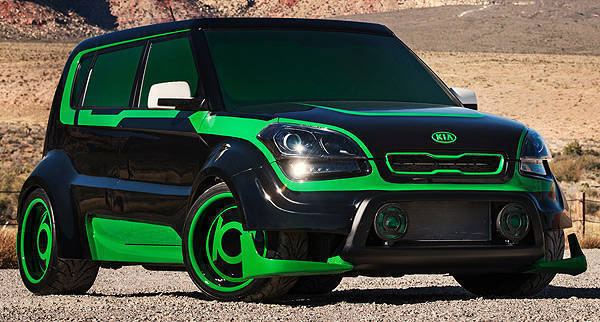 The Green Lantern-inspired Soul was given a wide-body treatment, and sports a green-and-black two-tone exterior paint scheme with green mirror-chrome tint on the windows. To go with the wider body, the Soul has one-off 18- x 10.5-inch deep-dish wheels. Though the Soul is a four-door vehicle, this particular model's rear doors have been welded shut supposedly to streamline its appearance. The blacked-out headlights also feature projector beams that glow green. Customized Green Lantern-logo fog lights in the widened front fascia and green LED lighting further enhance the Soul's appearance.

A custom rear-cargo compartment houses the Green Lantern power battery with the signature lantern logo etched into a clear panel displaying the superhero's oath lit by LEDs. Up front, the Soul's steering wheel and front seats were upholstered with green-and-black leather, and the Green Lantern logo was stitched into the seat backs. Other interior touches include various dash pieces painted in the green-and-black scheme. 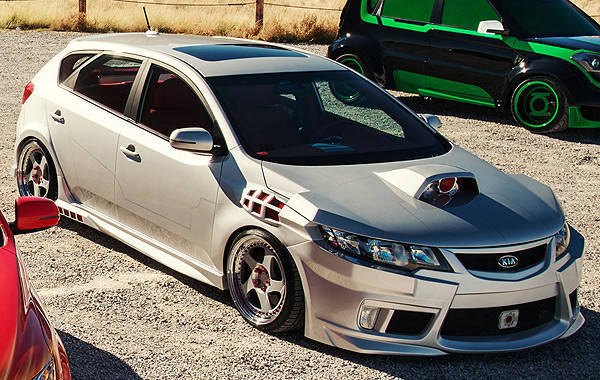 Inside, the car has red perforated leather and red suede that echo the red glow from Cyborg's power core. Red-and-silver trim highlights the Cyborg emblem featured within the interior design, while the tablet in the center console pays homage to the superhero's role as the team's source of communication means and information. The JL Audio sound system is another enhancement that underscores the fun side of the Justice League's youngest member.

"It was a thrill to see custom cars based upon my Justice League artwork revealed at the SEMA Show," said DC Entertainment co-publisher Jim Lee. "I tip my hat to the teams at West Coast Customs, Rides and Super Street on their innovative work creating cars that represent iconic characters like Green Lantern, Cyborg, Aquaman and The Flash--all to benefit a great cause. I'd like to thank Kia Motors America for supporting the 'We Can Be Heroes' campaign."