The Mazda MX-5 is what driving dreams are made of

What this car can evoke in a man
by Dinzo Tabamo | Aug 25, 2015
CAR BRANDS IN THIS ARTICLE 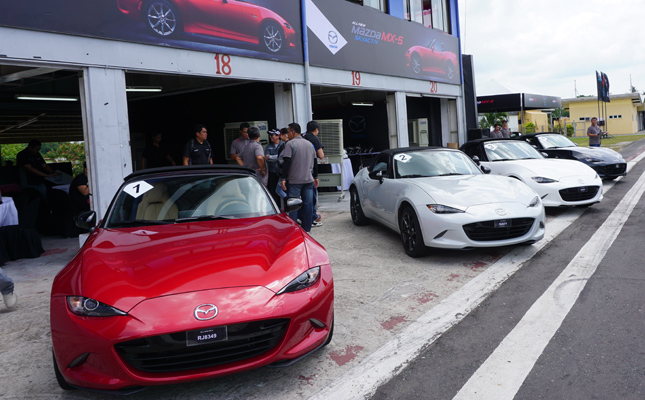 The Mazda MX-5 I want is Ceramic White in color, and it has a manual transmission. The paint job is hard to describe; it’s like a cross between off-white and light blue. But it’s a classy hue that understates the aggressive snout of the new Miata.

According to BPI’s auto loan calculator, if I put down 20% of the P1,680,000 price, I have to pay P28,511 every month for the next five years. Here at the Batangas Racing Circuit, as I wait for my turn to get behind the wheel of an MX-5 during this media and customer test drive event, I ponder the math. My mind constantly shifts its focus between the test drive and the above-mentioned five years of blissful motoring (albeit under the burden of poverty and hunger). Would I even be able to afford gasoline, I wonder.

This is the effect of the all-new MX-5 on a car enthusiast's soul. Mazda talks about its Kodo design language, or the Soul of Motion. But when Kodo is distilled into a form as pure as the Miata, a deeper meaning reveals itself--it prods the spirit to do the unthinkable. It urges one to give in to a temptation he is barely prepared for.

You look at the MX-5, even before driving it, and weekends in the countryside flash before your eyes. I imagine the top is down, the wind is in my face, and my right wrist is rowing through the six-speed gearbox.

There’s good reason to be excited even though I haven’t even touched the seat. The Japanese engineers gave us a presentation earlier in the day about their car, and while we normally just gossip or sleep through these things, what they explained to us was exciting stuff so we paid attention.

As soon as the seating position was mentioned, my ears perked up instantly. To me, Mazdas already have among the best seats in the business--and I’m talking about the everyday sedans: the 3, the 6, even the 2. But the MX-5 has been even more optimized for human ergonomics. They described a pedal layout for easier heel-and-toe driving (by increasing pedal thickness), and a shift-knob position that’s level with the elbow. The manual gearbox was said to have a crisp shifting sensation, with only minimal force required. Even the clutch release points and foot load were tweaked to aid in the changing of the gears.

In an age where the demise of the manual transmission has been much talked about, it’s refreshing to hear engineers speak so meticulously about shifting your own gears.

That said, Mazda still aimed for acceleration that's brisk and continuous, and not jerky. The driver will feel the rapid response, and the power will keep flowing in while the gas pedal is depressed. And when it’s time to stop, the MX-5 is designed to provide a stabilized line of sight for the driver. This means it will balance the load and brake linearly, and not lose control like unstable sports cars.

The power steering may be electric now, but linear feedback was still dialed in so that the driver can control the MX-5 while cornering. Likewise, the engine noise was made to sound “pure” (I suppose that means whole) at high rpm, where other mills might sound shrill.

And in one of the most amazing aspects of the presentation, it was revealed that Mazda had put the new MX-5 on a strict diet of aluminum. It now weighs almost as light as the first-generation Miata, while in some ways it’s 150% stiffer than the previous-generation NC series.

Will, the track marshal, calls my name and shakes me out of my reverie. I am led to a Ceramic White MX-5 (thanks, Will!), and sitting in the passenger seat to serve as my instructor is Philippine Touring Car Championship race driver Edwin Rodriguez.

I confess that this is my first time to ride in a Miata--of any generation. The new MX-5 sits really low, and my posterior just keeps dropping before it finally touches the fabric seat. The cockpit is beautifully stark. There are black materials, red stitching, chrome accents, and the familiar multi-information display seen in mainstream Mazda models. The body color extends to the upper portion of the doors, and it’s a lovely integration that reminds you that the outside and the inside are one. This is the most subtle but reassuring sign that you’re in a roadster.

The shift knob is a little ball connected to a short stalk. True enough, my elbow rests on the center tunnel. Side bolsters grip my love handles, firmly but not uncomfortably. I touch the steering wheel and feel the leather beneath my palms.

I lurch forward tentatively, getting a feel for the shift point. The clutch is softer than I expected, but it’s very forgiving. I rev a little higher, and soon I get the rhythm. The top is down, the weather is great, and I’m engulfed in the spirit of the Miata. I attack the corners and the car follows me; we are jinba ittai--horse and rider, car and man, as one.

Edwin senses that I’ve been cooped up in my desk and away from the track too long. He starts giving me instructions: Accelerate, hit the apex, downshift, third, second, throttle!

The MX-5’s 2.0-liter engine becomes sonorous, a wall of roadster sound enveloping us. As I step harder on the gas, it dawns on me how light this Miata really is. I feel the 158 horses pulling as if they were 200. The engineers were right: Acceleration is linear but strong. If it weren’t for sensei Edwin prodding me, I wouldn’t do this on my own.

The braking feel and the stopping power are very good. The MX-5’s weight barely shifts, and I clip the corners easily. Then it’s power on again, and the Mazda surges forward. At one point I overdo it, and the back kicks out. I brake, and with the help of the traction control, the car forgives me and I don’t have to explain to Mazda Philippines about an accident.

We pull into the pits to hand over the MX-5 to the next driver. I shake Edwin’s hand firmly. I look for my companions from Top Gear, and we all discuss our experiences, like schoolboys who just saw Star Wars for the first time. I hold my excitement until my next schedule behind the wheel, in a Soul Red Miata with automatic transmission this time. Now it’s just me and our videographer, and we go for a couple of laps just capturing video footage.

The AT version costs P1,860,000, and for the added cost you get leather seats, a nine-speaker Bose audio system, and...that’s about it.

Despite my firm decision that the manual is my choice, the six-speed automatic still surprises me with its alacrity and speed. It’s a little easier to tame, and before long I’m going around BRC at about 75% of the pace I was doing with Edwin. Our escort car radios me and asks if we have enough footage. Despite having more than enough, I tell him I need one more lap. Only my conscience prevents me from barking three more rounds.

After I park the red MX-5 in the pits, I gather my thoughts. A little forlornly, I realize the manual MX-5 is a little too much for me. It’s too light and too fast (at least the sensation is). The more forgiving automatic is a better road partner for me. With it doing the shifting, I can concentrate more on the road and the quick steering. Then again, therein lies the challenge of taming a beast. Having a manual MX-5 will need practice on the track, and more seat time to master its nuances. And those thoughts are just delightful.

In the end, the strongest impression isn’t what I felt on the racetrack. It’s what I dreamed about just looking at the MX-5: lazy afternoons in the country, the sun warming my face, the road stretching ahead. What this car can do is amazing. What it can do for someone who enjoys driving is worth any price--even at P28,511 a month, causing him to end his love affair with food.

Who needs to eat anyway? 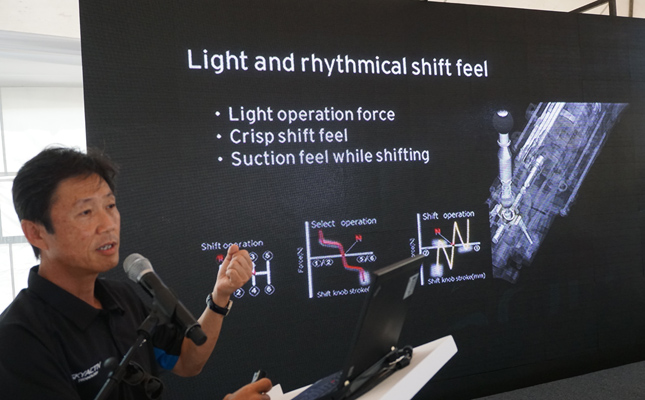 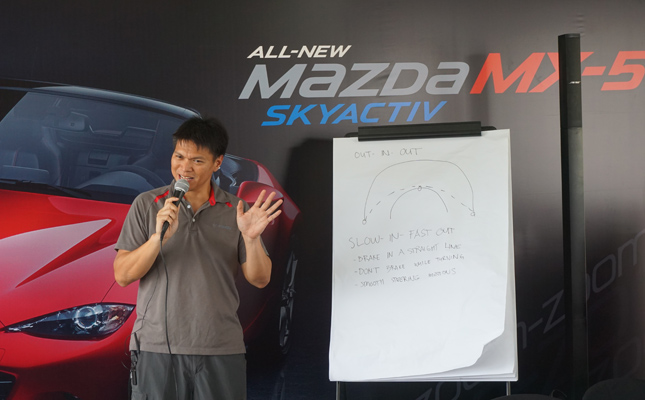 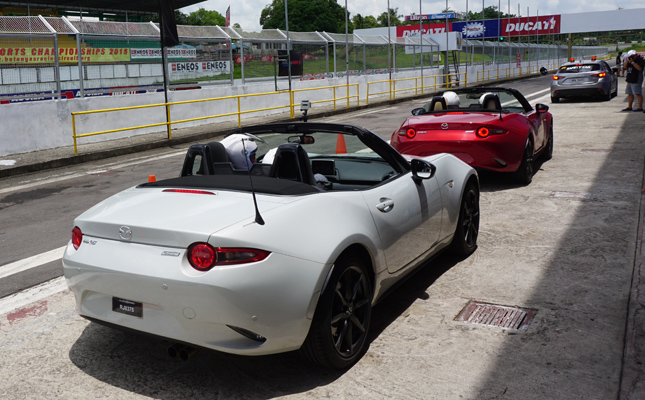 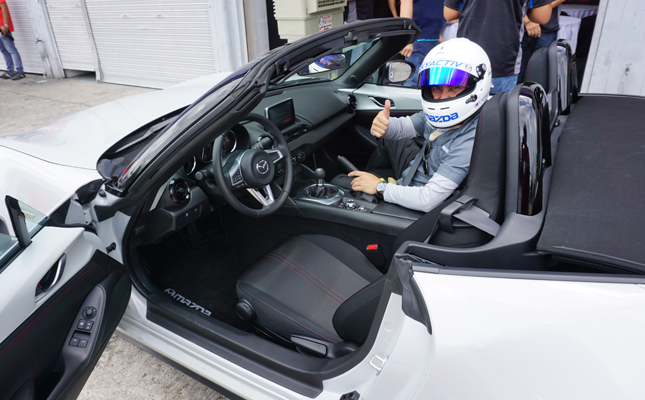 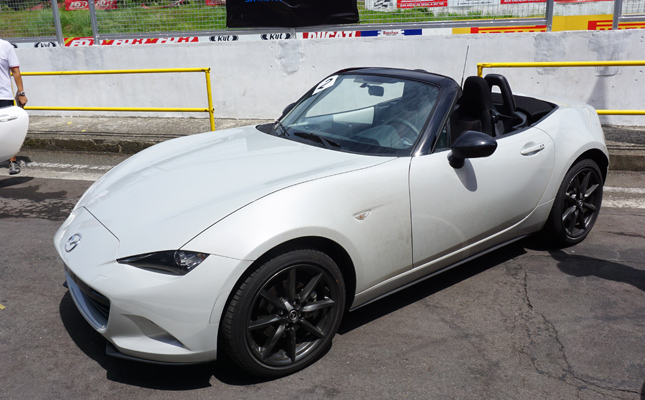 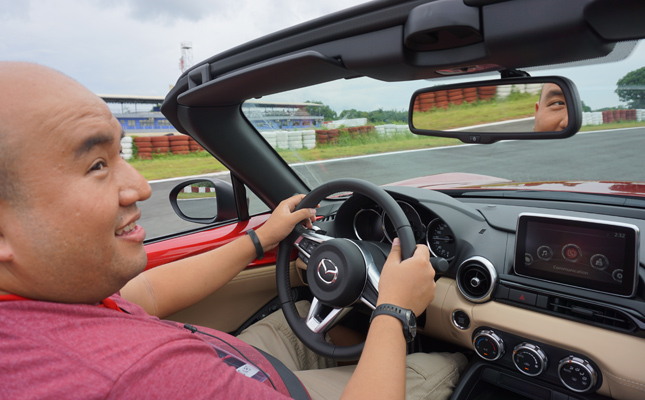 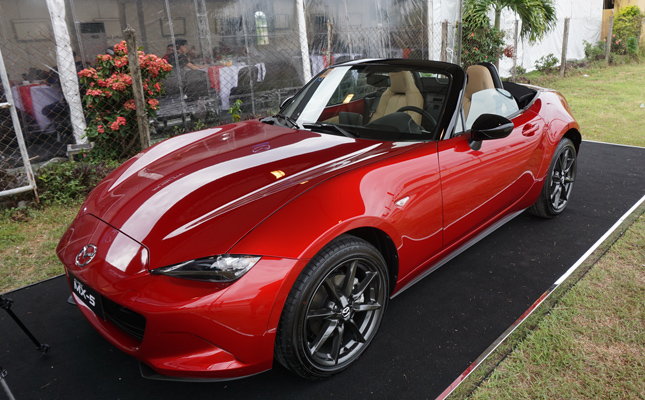 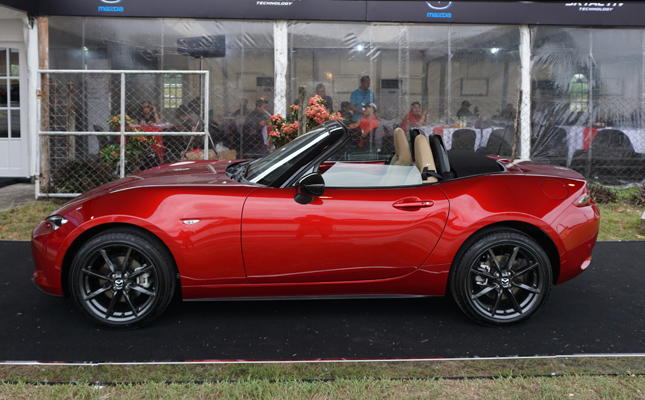 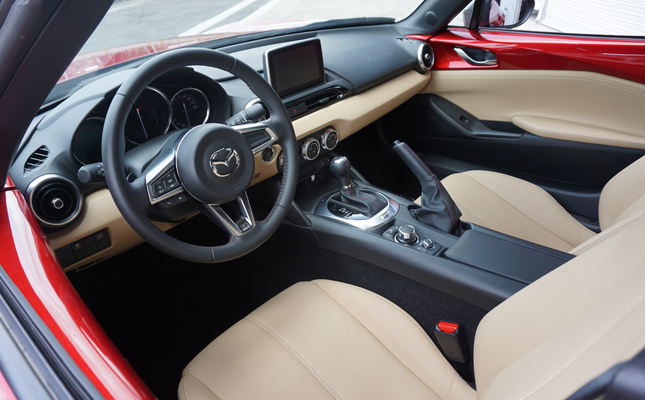 Modern-day Fahrvergnugen
View other articles about:
Read the Story →
This article originally appeared on Topgear.com. Minor edits have been made by the TopGear.com.ph editors.
Share:
Retake this Poll
Quiz Results
Share:
Take this Quiz Again
TGP Rating:
/20